In the tragedy Antigone, Sophocles pens a tale about a stalwart and distrustful king, Creon, and his misuse of the power he possesses. In the play he disregards the law of the gods to fit his whims, something that the heroine of the play, Antigone, wholeheartedly disagrees with; she disobeys his order to leave her dead brother, Polynices, unburied and sentences herself to death in the process. Antigone is engaged to Creon’s son, Haemon, who does not agree with his father’s actions in regard to the burial of Antigone’s traitorous brother.

Don't use plagiarized sources.
Get Your Custom Essay on Irony in Antigone: King Creon Just from $13,9/Page

The disagreement between father and son leads to Haemon’s suicide; ironically, Creon thinks it is his life that will be taken and not his son’s. Creon and Haemon argue about Antigone’s impending fate; their disagreement on the subject prompts a threat from Haemon: “No. Don’t ever hope for that. She’ll not die with me just standing there. And as for you— your eyes will never see my face again.

So let your rage charge on among your friends Who want to stand by you in this (870-875) Haemon declares that Antigone will not die without reaction from himself; Creon will never see Haemon again because if Antigone is killed Haemon plans to join her in death: by his own hand. Haemon then says that Creon’s rage will force Haemon’s own hand to do something that Creon will regret. Creon does not understand that Haemon is threatening his own life; instead, he believes that his own life is being threatened, and his reactions to Haemon’s words are lined with fear, ignorance, and irony.

The irony of the situation is that Creon is so blinded by his own ego that he thinks his own life is in danger, when it is actually his son’s that is. Creon only realizes the error of his assumptions and actions after Haemon commits suicide. More irony arises with the death of Haemon; he has joined Antigone in death to have what Creon denied them while living: each other. At the close of the play Antigone, Haemon, and Eurydice, Creon’s wife, have all committed suicide because of Creon’s actions.

Creon is suspicious through the entire play; in the beginning he accuses Antigone and Ismene of plotting to steal his throne, saying: “You there—you snake lurking in my house, sucking out my life’s blood so secretly. I’d no idea I was nurturing two pests, who aimed to rise against my throne. Come here. (607-610)” These words are directed towards Ismene more so than Antigone because Creon already suspects her of wrongdoing. He is surprised to see Ismene lurking in the shadows as she eavesdrops on the judgment of Antigone; upon seeing Ismene, Creon is convinced that she has conspired with Antigone to steal his life and throne.

In short, he is aware of one pest, Antigone, but does not consider Ismene as a pest until she is discovered eavesdropping. After Ismene is discovered Creon calls her over to be judged alongside Antigone. This is the first sign of Creon’s extreme suspicion that the reader sees; not only does he accuse Antigone and Ismene of conspiring to steal his kingship, but he accuses them of trying to take his life as well. Creon’s suspicion of his impending death is ironic because at the end of the play both Antigone and Haemon take their own lives instead of Creon’s.

Creon does not realize the damage he has caused until it is too late to fix; the time for rectification of the situation has passed and he feels deep anguish at the loss of his son. He never imagines that Haemon spoke of killing himself when they had their exchange of words earlier in the play; when next to Haemon’s corpse Creon says: Aaiii—mistakes made by a foolish mind, cruel mistakes that bring on death. You see us here, all in one family— the killer and the killed. Oh the profanity of what I planned. Alas, my son, you died so young—a death before your time. Aaiii . . . aaiii . . . ou’re dead . . . gone—not your own foolishness but mine. (1406-1414)

Creon explains with grief that he now realizes his actions caused the death of Haemon; his mistakes are cruel and Haemon is gone not of his own foolishness, but of Creon’s. Further irony shows after Creon discovers that his wife, Eurydice, is also dead; he asks for death by double-edged sword, when earlier he was extremely fearful about his own death and vehement about not dying. He says, “ Aaaii . . . My fear now makes me tremble. Why won’t someone now strike out at me, pierce my heart with a double bladed sword? How miserable I am . . . aaiii . . . how full of misery and pain . . . (1453-1457). ”

Creon begs for the death that he is unreasonably obsessed with earlier in the play; it takes the fulfillment of Haemon’s threats to make Creon seek death, and is most definitely ironic in comparison to his attitude towards death earlier in the play. Ironically, Creon now feels the misery of Antigone and Haemon, which he caused; he pierces each of their hearts respectively when he denies Antigone proper burial of her brother, Polynices, and when he denies Haemon his bride, Antigone.

Creon’s final words are: Then take this foolish man away from here. I killed you, my son, without intending to, and you, as well, my wife. How useless I am, I don’t know where to look or find support. Everything I touch goes wrong, and on my head fate climbs up with its overwhelming load. (1485-1490) Once filled with immense confidence and arrogance, Creon now feels helpless and useless; ironically, he feels hopeless and distraught not because of anyone trying to steal his power or take his life, but because of his own distrustful actions and ignorant thoughts that cause his world to unravel before his very eyes.

You may also be interested in the following: situational irony in antigone 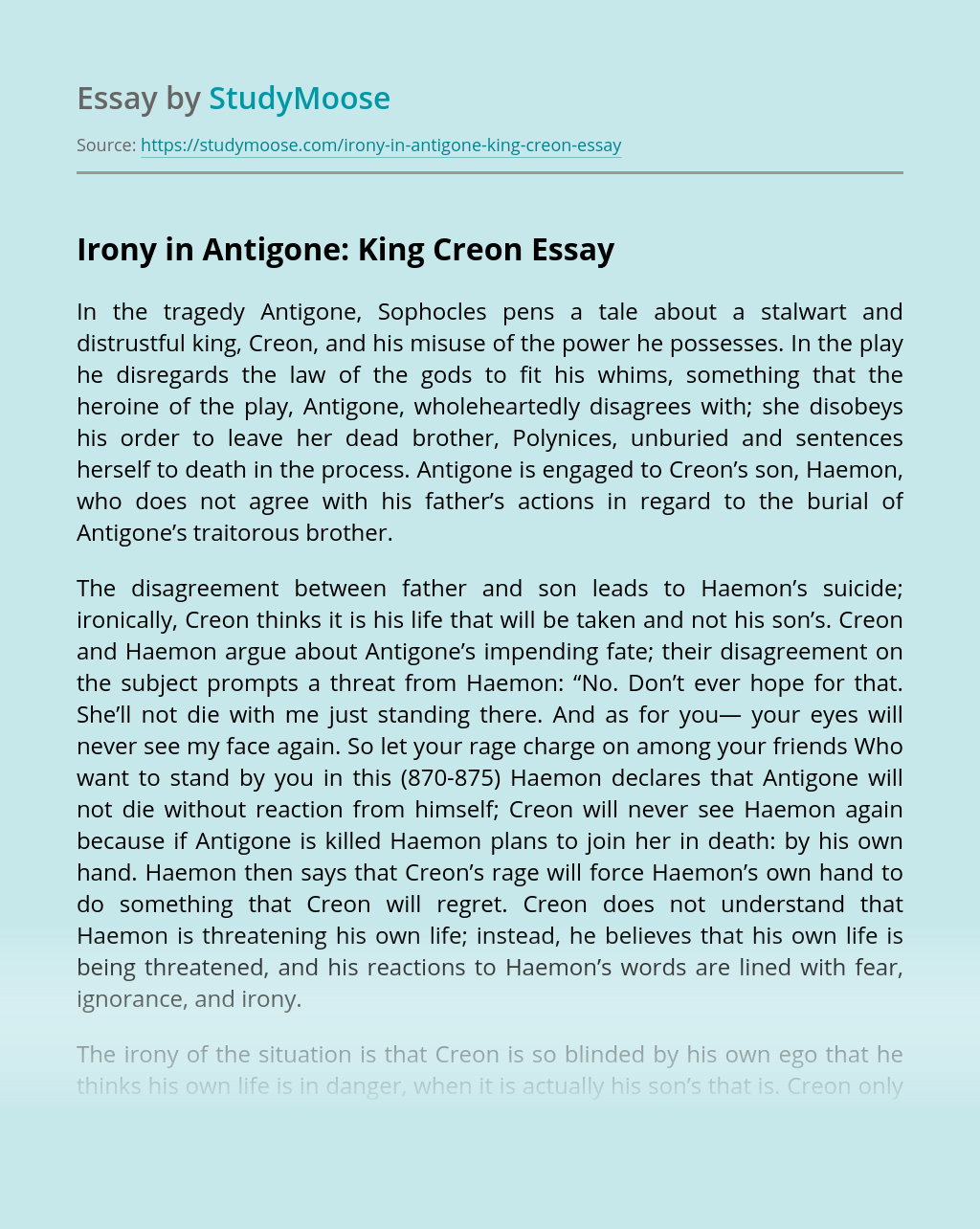 Is there a limit to human knowledge? I believe knowledge is grown

Is there a limit to human knowledge? I believe knowledge is grown by process of accumulating facts, and there are always new facts to discover. Even when a person knows most of what already has been exposed, the next step is to understand the purpose of wanting to know more and more, particularly if the... VIEW ESSAY

Culinary Arts is a broad field that contains many different specializations. Culinary Arts is something that will never go away, you have to eat everyday to live and lead a healthy life. Food as we know is essential for the growth and maintenance of the human body. Culinary Arts enhances your knowledge of life skills... VIEW ESSAY

The “Why Loiter?” movement aims to assume control over a little piece of open space with the goal that ladies, similar to everyone else, can seek entertainment and delight in the avenues of a lively urban space.2. Why Loiter?’ is about the ultimate freedom a woman demands in an urban space: the freedom to do... VIEW ESSAY

The objective of our project was to build a Independent audible thermometer, which can speak the body temperature of a person. Our original goal was to build both software and hardware setup of the audible thermometer. We have already finished the software setup and we are currently working on the hardware, which we couldn’t complete... VIEW ESSAY

Robert S. Kaplan and David P. Norton introduced the balanced scorecard, which supplemented traditional financial measures with criteria that measured performance from the perspectives of customers, internal business processes, and learning and growth. The scorecard enabled companies to track financial results while monitoring progress in building the capabilities they would need for growth. Traditional management... VIEW ESSAY