A recurring metaphor throughout the play is comparing the State with a ship. In the beginning of scene one, Creon says: “I have the honour to inform you that our ship of state, which recent storms have threatened to destroy, has come safely to harbour at last, guided by the merciful wisdom of heaven” (196). This was used in reference to Polyneices and his invasion on Thebes.

Even though Creon praises the gods for guiding the “ship of state”, Sophocles lets the reader know that Creon thinks that he himself is in control.

Don't use plagiarized sources. Get your custom essay on
“ Sophocles’ Antigone ”
Get custom paper
NEW! smart matching with writer

It is evident when Creon announces that Polyneices will not be buried even though he knows that this is against the law of the gods. “If the great eagles of God himself should carry him [Polyneices] stinking bit by bit to heaven, I [Creon] would not yield” (232). This quote shows that Creon is willing to go against the law of the Gods.

Creon sees himself as the captain this metaphorical ship.

“My voice is the one voice giving orders in this city” (220). This quote shows that Creon feels that he is the only one who can guide the ship of state and that he does not take others judgement into account. It is evident when he says: “To go to school to a boy” (220). Creon says this when Haimon tries to give him advice.

He is being condescending here and does not that take the advice due to Haimon being younger. He feels that he has more experience in life compared to his son, therefore he must be correct by default.

Creon is being stubborn and makes an irrational argument, which Haimon notices: “What does my age matter?” (220).

Opposing forces are represented using the metaphor of wind and storms. When Polyneices invaded Thebes he “roused them [Thebes army] with windy phrases” (194). This compliments the metaphor of a ship being compared to the State. Sophocles uses these metaphor to set forth the idea, that the invasion is like a storm, and the ship is the country, which is being battered by the wind.

The wind metaphor is also used to depict Creon’s stubborn pride. “In flood time you can see how some trees bend, and because they bend, even their twigs are safe, while stubborn trees are torn up, roots and all. And the same thing happens in sailing” (219). In this quote, Haimon is asking his father Creon to not be so stubborn and to let himself be reasoned with. And if he does not there might be consequences. Sophocles once again uses the ship metaphor in this quote. This foreshadows the ending of the play where Creon has to pay dearly for having too much stubborn pride. 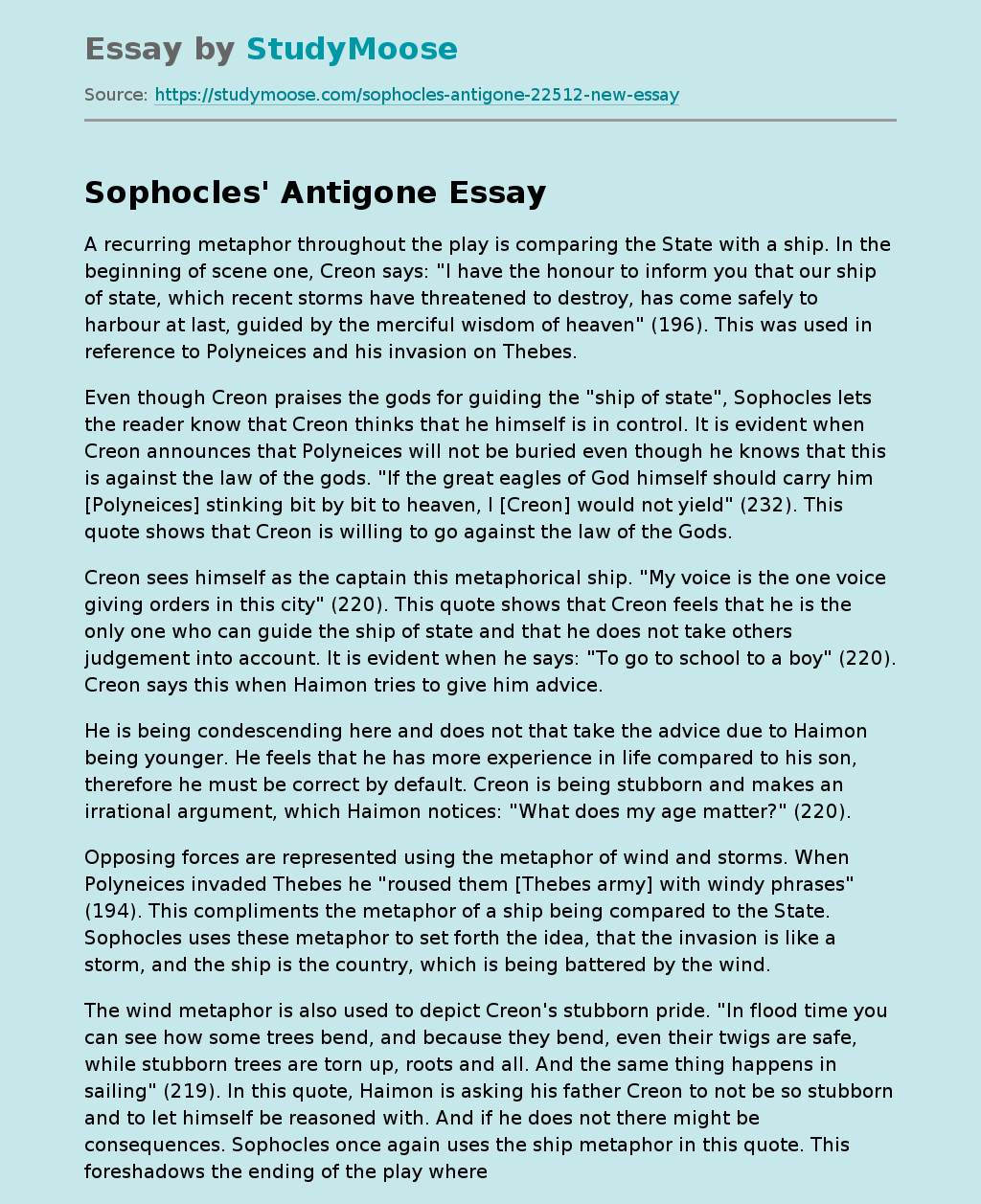