Most Greek tragedies were based on myths and consisted of a series of dramatic episodes mixed with a chorus who commented on the dramatic action or analyzed the pattern of events. The role of a tragic hero was vital to the tragic plays. Sophocles argues that a tragic hero is a character who possesses six specific traits. A tragic hero must be of noble stature, can not be perfect, their downfall most be their fault, their misfortune is not wholly deserved, the fall is not a total loss, and has a moral purpose.

Therefore, Creon is the tragic hero in Antigone because he is of noble stature, posses character flaws, and his fall is not an entire loss.

Creon is the brother of Jocasta, who was the wife and mother of Oedipus, who was the king of Thebes. He becomes ruler of Thebes after the s of Oedipus’ two sons, Eteocles and Polynices in the recent civil war. In his speech to the people assuring the citizens that order and safety have returned to Thebes he says, “I now posses the throne and all its powers”(line 194, page 67).

Throughout the whole play Creon exhibits that he is imperfect. Creon is very stubborn as well as ignorant, which results in his many problems all through the play.

In his dispute with Haemon over the fate of Antigone he says, % –show me a greater crime in all the earth! She, she destroys cities, rips up houses, breaks the ranks of spearmen into headlong rout. But the ones who last it out, the great mass of them owe their lives to discipline. Therefore we must defend the men who live by law, never let some woman triumph over us. Better to fall from power, if fall we must, at the hands of a man–never be rated inferior to a woman, never (lines 751-761 page 94).” The word % ” basically means “without a leader.” He makes it sound as if he may be speaking about Antigone.

Creon looks at as the unavoidable consequence when insubordination of the law is left with impunity. This excerpt vividly shows how Creon is very stubborn and ignorant. He refuses to see that woman play a major role in society. He only views them as objects. He visions woman as a threat to masculine superiority and he will stop at nothing to avert this from happening. His refusal to allow Antigone to go free ultimately results in the of his son and his wife. This shows that Creon is imperfect, which is also one of the requirements of a tragic hero.

By the end of the play, after the of his wife and son, Creon gains some self-knowledge and learns from what he has done. After Creon learns of the of his wife and son he says, “Ohhh, so senseless, so insane… my crimes, my stubborn, ly— Look at us, the killer, the killed, father and son, the same —the misery! My plans, my mad fanatic heart, my son, cut off so young! Ai, , lost to the world. Not through you stupidity, no, my own (line 1395-1400, page 124).” This quotation from the play illustrates that Creon realizes that his stubbornness and foolishness is the cause of all of this pandemonium. Creon now understands that his flaws resulted in his family’s . He then goes on to say, “Oh I’ve learned through and tears (line 1405-1406, page 124).” This shows that he has learned his lesson so the of his family is not a complete loss because now he is aware of the fact that it is because of his stubbornness and stupidity that this occurred. This shows that Creon’s fall is now a pure loss, which is as well, a condition of a tragic hero.

Creon is the tragic hero in Antigone because he is of noble stature, posses character flaws, and his fall is not an entire loss. These flaws eventually are what leads Creon to his demise and to the of his wife and son. In Antigone there were numerous themes. One of the themes is pride and its effect on the characters. Both Antigone and Creon are exceedingly proud, making it impossible for either one of them to back down once they have taken a position on something. This character flaw leads to their downfall. In contemporary times, we can relate this type of tragic hero to powerful figures like Donald Rumsfeld, who does not waver from his positions until others have paid a heavy price for his pride. Another theme is Moral Law vs. Human Law. This is shown when Antigone’s conscience influences her to bury her brother, which conflicts with Creons law of the state. It’s a decision of whether morals should be placed above the human law.

A semi-modern example of this can be seen in World War II where the soldiers had to decide between their morals or the decision of the state in the s of the Jews. The third and final central theme is the position of woman. This is brought up several times in Antigone. Creon feels that woman are subordinate to men and should never be placed as high as men. This is also evident in present times because even now women do not have the same opportunities as men do although women have come a long way in just this century. There will always be tragic heroes in any society. They are usually high-profile people who rise and fall in the public eye. Hopefully, those of us who watch their stories unfold can learn from their experiences by debating the merits of the decisions a one-time hero made to render him/her tragic. The presence of a tragic hero is evident in modern society because even now we have people who are examples of tragic hero’s. 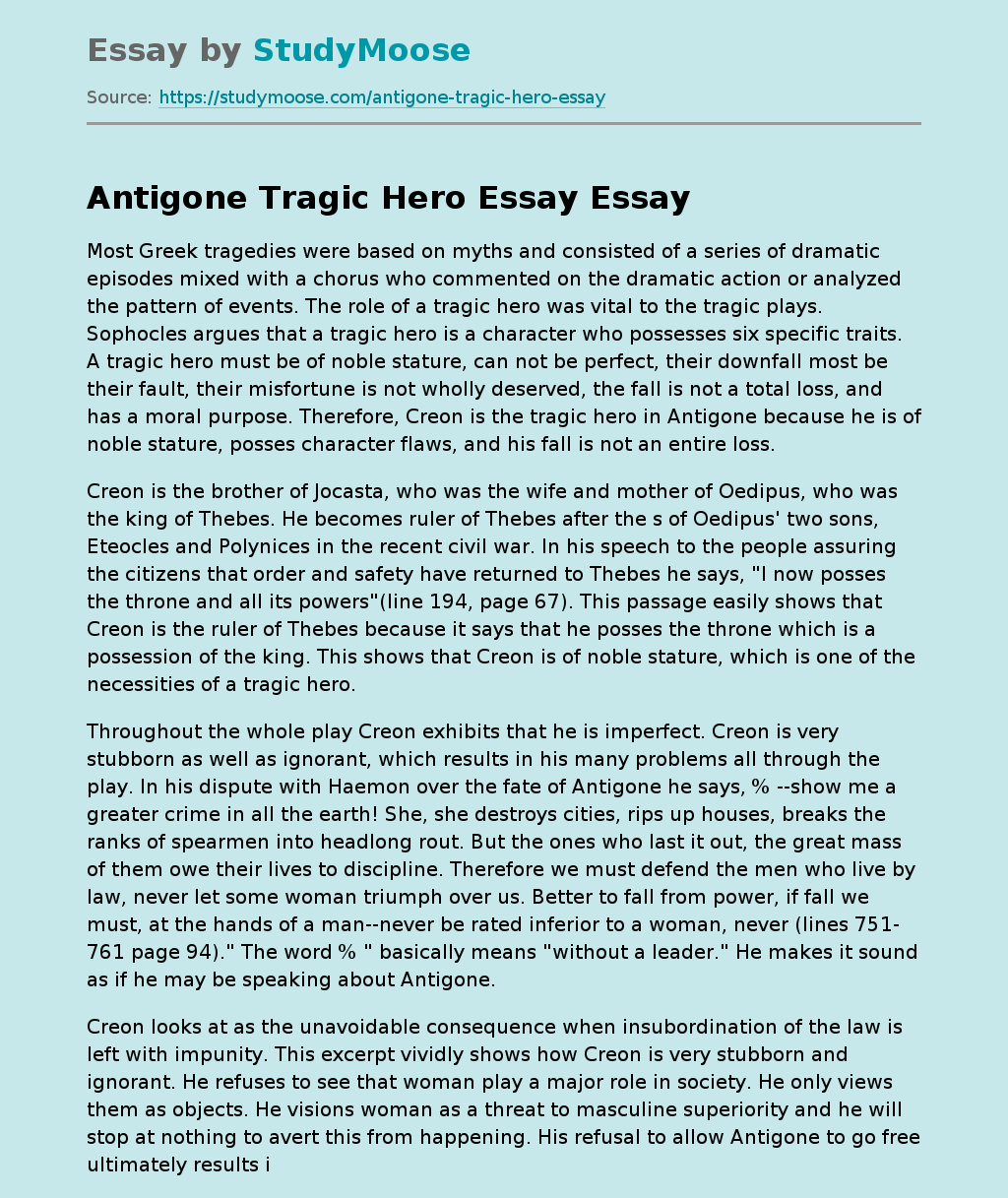