The Role of Fate in Sophocles’ Antigone

The ancient Greeks firmly believed that fate ruled their lives. The gods, they believed, knew the fate of each and every one of them. Their destiny was decided at birth. This philosophy became the driving force in Greek tragedies. The three Theban plays of Sophocles involving Oedipus and his family reflect this belief with tragic outcomes in each instance. Yet fate plays a much different role in the play Antigone than it does in Sophocles’ Oedipus Rex. Oedipus was warned by the gods as well as by prophets.

Turn in your highest-quality paper
Get a qualified writer to help you with
“ The Role of Fate in Sophocles’ Antigone ”
Get high-quality paper
NEW! AI matching with writer

He lived his life in anticipation of his fate, whereas Antigone seems to act as the master of her own fate.

Both end up tragically with fate playing a starring role; but in Antigone there are other nuances of fate that drive the plot. The Role of Fate in Sophocles’ Antigone Modern man is a creature of his free will. Someone who commits a crime such as murder does so of his own free will.

If a person being tried for murder were to argue that it was fate – that he was destined to kill, this argument would not carry much weight with a jury. This concept of man’s free will is something that was not a part of ancient Greek philosophy. The gods ruled the lives of the Greeks and, they believed, directed their fate.

The Greeks had three gods of fate – the Moirai – who were believed to “spin the threads of a human destiny” (Fate, 2008). Their names personified their purposes – Clotho (Spinner) was the goddess who wove the fate of each person; Lachesis (Allotter) was the one who dispensed the fate; and Atropos (Inflexible) decided when the thread of fate would be cut (the moment of a person’s death) (Fate, 2008).

They also believed in oracles or seers who predicted their fate. Although these prophecies were often misunderstood, the Greeks took them to heart, living their lives according to what they determined (rightly or wrongly) was their fate.

They were creatures of the gods and this philosophy pervaded their lives. They lived their lives pursuing knowledge of their fate, a difficult task considering that the gods and the oracles gave them only an imprecise piece of their story. The Greek god Zeus, they believed, could save them from fate if he wished. But more often than not, Zeus took no role in the fate of each person. The Greeks’ perception of the role of fate in their lives was often the subject of Greek drama. Aeschylus portrays his characters as driven by the actions of the gods.

Euripides’ characters were ordinary Greeks portrayed as they were. But Sophocles created characters who were “governed in their fate more by their own faults than by the actions of the gods” (Sophocles, 2007). This is particularly true in his play Antigone, where the title character is driven by her sense of family as opposed to her obedience to the law. She defies the order of her uncle, Creon, who became the ruler of Thebes upon the death of her brother Eteocles by the hand of her other brother Polyneices. Creon orders that Polyneices, as a traitor to Thebes, should lie unburied (Sophocles, 1996).

Antigone defies his order and scatters funeral oil and earth over her brother’s body. She is determined to bury her brother, no matter what the consequences. She is confident that she is right and she does not swerve from her goal. According to Lines in her essay Antigone’s Flaws, the flaw of hubris in Antigone is overlooked because she appears to be doing the right thing – obeying the law of the gods over the law of a mere mortal (Lines, 1999) but it is her own persistence and possible ill-placed pride in what she is doing that leads to her ultimate death. It is not the prophesy of a seer that determines her fate.

In effect, she is the master of her own fate, unlike her father whose fate was determined by the gods and the prophecies of the oracles early in his life. Both Oedipus, Antigone’s father, and Antigone herself experience the tragic consequences of their actions, but Antigone, even if her destiny were spun by the Moirai, had opportunities to alter her fate; Oedipus, by the time he realized how his life had been predetermined, really had no choice in the matter. To prove her point, Lines cites the chorus in Antigone who say that Antigone is “a law unto herself” (Lines, 1999).

Her fate, therefore, is self-willed. She is drawn to her fate by her “self-certainty or, perhaps even better, self-righteousness . . . a form of hubris” (Lines, 1999). Her position is reinforced in an essay by Leach in which she says “That ‘a man’s character is his destiny’, as Heraclitus says, is a principle clearly recognized indeed by the Greek drama” (Leach, 1917, 139). The philosophy of fate and destiny in ancient Greece was essential to the tragic plays of men like Sophocles, but it did not always play the same role in every drama.

There are those characters that are destined to fulfill the fabric of fate woven for them by the Moirai at birth. And there are others whose flaws seal their fate – a fate that might otherwise be avoided. Antigone falls into the latter category, her willfulness and righteousness leading to a tragic end not only for her, but also for her lover Haemon and his mother Eurydice.

The Role of Fate in Sophocles’ Antigone. (2016, Nov 21). Retrieved from https://studymoose.com/the-role-of-fate-in-sophocles-antigone-essay 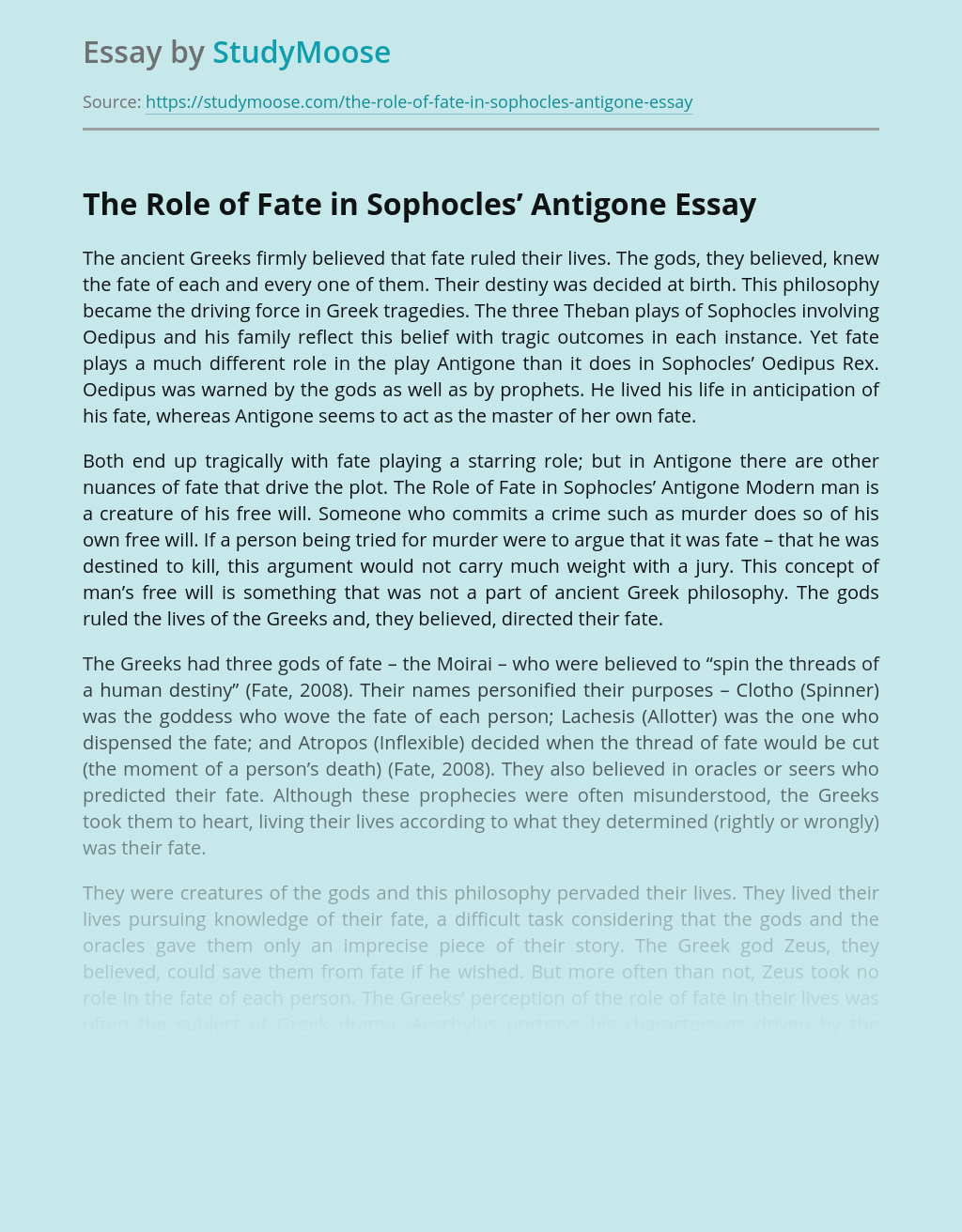 Turn in your highest-quality paper
Get a qualified writer to help you with
“ The Role of Fate in Sophocles’ Antigone ”
Get high-quality paper
Helping students since 2015
Stay Safe, Stay Original