Kate Chopin’s “The Story of an Hour” is the tale of one woman’s brief moment of clarity and freedom; an hour of freedom granted by the death of her husband. Mrs. Mallard is shocked to death by the realization that her husband is in fact alive. The following essay discusses the presence of both situational and verbal irony in “The Story of an Hour”.

“The Story of an Hour” demonstrates situational irony at its conclusion. The unfairness of the situation is undeniable; it is an odd unexplainable tale.

Don't use plagiarized sources. Get your custom essay on
“ Situational and Verbal Irony Present in “The Story of an Hour” by Kate Chopin ”
Get custom paper
NEW! smart matching with writer

Mrs. Mallard turns from utter sadness to tremendous joy; only to have her joy stolen from her by the very thing which caused her both sadness and joy. The death of Mr. Mallard initially brings his wife sadness and she locks herself in her room, where she sits staring out the window in thought. Her quiet contemplation leads her to remember how she was treated by her husband. She slowly comes to the realization that she will no longer be controlled by Mr.

Mallard; that she was a free woman.

The scene describing her new found freedom was intense, demonstrating the momentousness of the realization. This turning point in the story makes the ending, while at first unbelievable, much more realistic. The reader is forced to believe the unbelievable; that the shock of seeing her husband alive, after finally being free, was too much for her heart to bear.  In a sarcastic understatement, an example of verbal irony, Chopin writes that the doctor reported the cause of death as the joy of seeing her husband was such a shock that she died instantly.

In reality it was the realization that the beautiful life she envisioned for herself without her husband was no longer a reality. This was such a terrifying thought that she suffered a heart attack and died.

The situational irony present in the story from beginning to end was that in the beginning she was wrought with sadness at the news of her husband’s death; but then in a moment of clarity she realized that she was free from her husband’s control. She would no longer have to bend her will to his. The true irony was Mrs. Mallard’s realization that when her husband was alive she wished that her life would be short lived, but now that her husband was dead, she wished for a long free life (3). Before her husband walks through the front door, she had imagined a life of true freedom, of being her own person. Chopin writes; “Spring days, and summer days, and all sorts of days that would be her own” (3).

In conclusion, “The Story of an Hour” is a story which leads to situational irony. The author sets the reader up for the surprising and unfair ending in which Mrs. Mallard, and not her husband, ends up dead. The irony of Mrs. Mallard realizing that although sad about her husband’s death, the overwhelming, undeniable truth of her freedom causes her tremendous joy. The short-lived joy results in the story’s ironic twist of fate at its conclusion. Some readers may have found the conclusion to be Mrs. Mallard’s “just desserts”, where others may have felt that the conclusion was an unfair twist of fate. Regardless of the reader’s interpretation of the conclusion; the situational and verbal irony present in “The Story of an Hour” is undeniable.

Chopin, Kate. The Story of an Hour. Virginia Commonwealth University. 17 May 2007 <>

Situational and Verbal Irony Present in “The Story of an Hour” by Kate Chopin. (2021, Apr 20). Retrieved from https://studymoose.com/situational-and-verbal-irony-present-in-the-story-of-an-hour-by-kate-chopin-essay 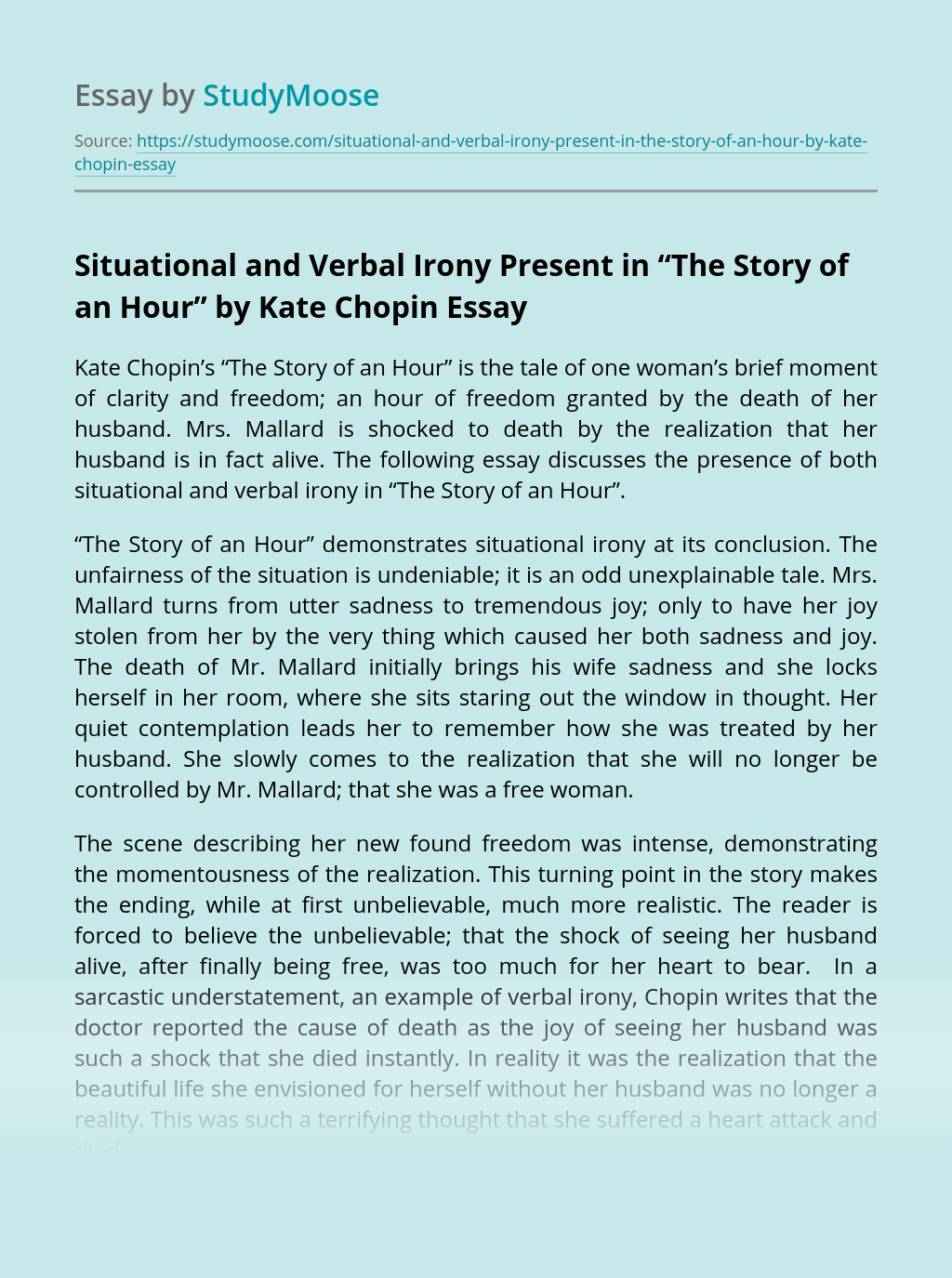