Kate Chopin's Story Of An Hour And The Storm

Author Kate Chopin has expressed feminine freedom in two of her short stories: “The Storm” and “Story of an Hour”. She was the breakthrough author for female independence and human sexuality. Through these two short stories, Chopin describes the lives of two women who discover their freedom in times where society does not accept women as equal to men. “The Storm” relates love and marriage as a prevention for free full blown passion. “Story of an Hour” relates love and marriage to unhappiness and repression.

Don't use plagiarized sources. Get your custom essay on
“ Kate Chopin’s Story Of An Hour And The Storm ”
Get custom paper
NEW! smart matching with writer

“The Storm” holds a very symbolic meaning for passion. It affirms feminine sexuality through Calixta and Alcee’s relationship. Despite Calixta’s marriage to Bobinot, she proceeds with her unacceptable behavior in society with Alcee and commits adultery. Her newfound passion determines the importance of passion in 1890s where many women felt they were bound. Many parts in the story foreshadow Calixta and Alcee’s sexual encounter. The storm itself was describing their progressing passion with the encounter of a lightening bolt and thunder: “Calixta put her hands to her eyes, and with a cry, staggered backward.

Alcee’s arm encircled her, and for an instance he drew her close and spasmodically to him.” The increasing power of the storm represents the increasing passion between the two lovers.

This short story puts aside the constraints of society and marriage, and opens a door for feminine sexuality.

The same sense of freedom that Chopin expressed in “The Storm” applies to “Story of an Hour”. Main character Louise Mallard is an elderly woman who has lost her husband.

She is in a state of thought when she realizes her newfound freedom. She discovers that her marriage was a bondage and hopes for a long life to enjoy this new freedom. Her marriage seemed to have cast shadows on her happiness. In this time of thought, she focuses on her own feelings and indifference to her husband Brently Mallard. Even more so Louise is affected with her heart condition.

Her heart condition foreshadowed Louise’s demise. It’s purpose was to describe her as weak of heart and weak of character. She could not accept her misery and lacked honor even so to be aware of her own unhappiness. This again expressed the oppression of women in the 1890s mentally and physically.

The two stories share a sense of contradiction. Calixta is left happy and renewed after her experience. She welcomes her husband Bobinot and her son Bibi happily when they arrive home after the storm. This is where Chopin describes the first step into freedom of marriage and sexuality. “Story of an Hour” on the other hand expresses demise of a woman who was on the verge of freedom. Louise is happy too when she realizes that her marriage was preventing her from happiness. She chanted the word free to her self in realization. She is so overwhelmed with her freedom that she dies when her surviving husband appears to her. She dies of knowing that she does not have her freedom after all.

Chopin expressed love as a way of freedom and oppression in her short stories. She described Calixta’s adultery a passion while Louis’s marriage an oppression. Either way, it lead to some sort of resolution into freedom. The discovery of passion in “The Storm” was so great that Alcee himself did not want to commit to his wife. In “Story of an Hour” Louise Mallard considered her marriage and love unreal and unworthy of her. She does not want to be under the will of another person Women of Chopin’s time felt these fictionous stories, but were undermined of society.

Love, passion, and marriage work together in “The Storm” and “Story of an Hour” to bring an idea to the reader of how relationships were in the 1890s. Love and marriage fall to passion in Chopin’s stories.

Kate Chopin's Story Of An Hour And The Storm. (2016, Jul 13). Retrieved from https://studymoose.com/kate-chopins-story-of-an-hour-and-the-storm-essay 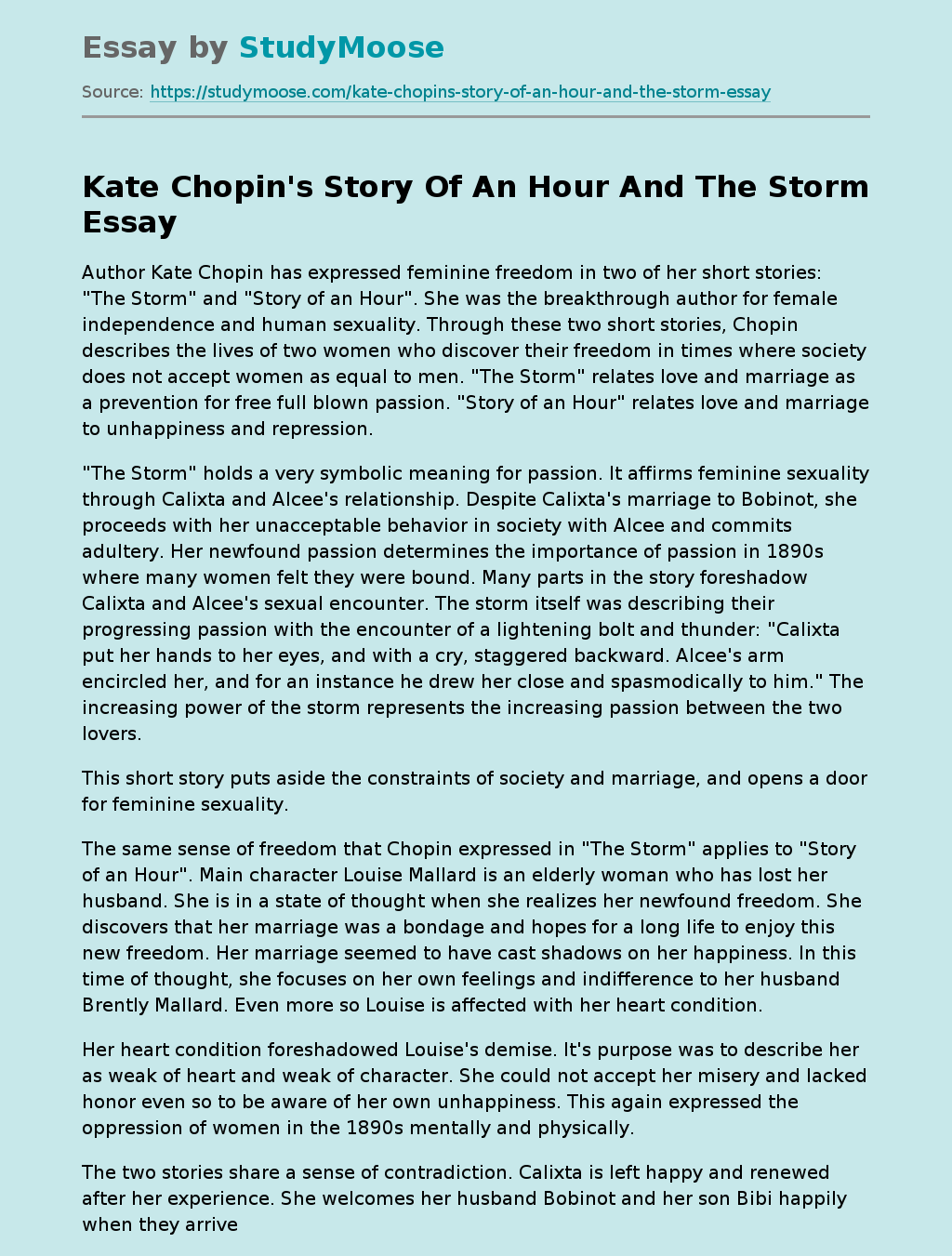