The Story of an Hour by Kate Chopin

The Story of an Hour by Kate Chopin explores the sense of liberation for social forces that holds the character down and focuses on the feminine gender’s side of such struggle. Caged in a patriarchal society, women have been rightfully fighting for a life worth living. Born in such a society, women are often aware of their right to happiness. In this story, it takes an accident, particularly her husband’s death, for Mrs. Mallard to realize her self-worth. Mrs. Mallard symbolizes women’s situation with respect to her role in society.

Her husband represents the patriarchal mindset of culture and society and it is in a sense ironic, that Mrs. Mallard’s sense of awakening, her “birth,” was made possible by the death of her husband. In the same way, that her new-found freedom is cut short by her demise. Writers are known to apply aspects of their life into their writings and works. Some literary critics may view such process as insignificant, citing that any analysis of such works in literature must concentrate mainly on the work body rather than any external consideration outside the work.

The mention of Mrs. Mallard’s health condition at the very onset of the short story paves the way for the consistency of the story’s ending.

The simplicity of the setting indicates less the material sense of the story. For everything is much a personal sensing and contradiction of the main protagonist. In fact this particular part in the story is significant.

She writes, “She could see in the open square before her house the tops of trees that were all aquiver with the new spring life.” Sensory images flood her being and all of a sudden the vision of the window means a lot to her. These nostalgic sensory images are an onset of Mrs. Mallard’s new sense of liberation. The vision through the open windows means a fresh perspective into her life.

The husband may have treated her wife fairly as dictated by social norms of the time. Mrs. Mallard utterance of those words was not an implication of an unhealthy and brutal marriage but was more a declaration of Mrs. Mallard new found sense of independence, a sort of unbinding from the social chains of familial duty. The closing of the door and the opening of the window was very much symbolic to Mrs. Mallard’s closing of one aspect of her life, her marriage, and an advent of life of new possibilities. In a sense, it was a certain kind of freedom from a socially-imposed “prison.” As she imagines life without her husband, she embraces visions of the future.

She realizes that whether or not she had loved him was less important than “this possession of self-assertion” she now feels. Marriage for women at those times was more of a one-sided arrangement in favor for the male species. Although one might argue that, at present, this is less prevalent. But the fact remains that gender bias is still incorporated into society in much subtle ways. This is very much how Mrs. Mallard felt towards her marriage. Her happiness was much subordinated by her sense of duty. Duty was highly regarded in Victorian view of morality.

The symbolic travel is Mrs. Mallard’s personal journey of liberation paved by a sense of foreboding and tinge of sweet joy. Chopin uses parallelisms between her real life and that of her character Mrs. Mallard in the story. These are the death of her husband, the train wreck and issues on personal freedom. As recorded in her biography, the author Kate meets a Louisiana native, Oscar Chopin, a cotton broker. We see glimpses of her relationship with him by the way she follows her husband wherever he hauls their family from one place to another. At some time during their marriage, they establish a new home in New Orleans while waiting for their first child.

However, her husband’s brokerage business fails in 1879 and again he decides to move north to his family plantations in Natchitoches Parish. We see Kate here, subservient as any woman of her time, following her husband wherever he summons herto follow. Author Wyatt posits that Oscar was “by all accounts, he adored his wife, admired her independence and intelligence, and allowed her unheard of freedom” (Wyatt). However, one is not sure if this was a real freedom she experiences from her husband because it is also told that “After their marriage they lived in New Orleans where she had five boys and two girls, all before she was twenty-eight.” (Wyatt).

Having five children before one is twenty-eight years of age means that she bore these children practically one after another. Thus, how could a woman who possesses a freedom of her own give birth one after the other? In much the same way, The Story of an Hour tells of Mrs. Mallard as she learns of the death of her husband from people who even exercise great caution not to tell the bad news to her right on since “Mrs. Mallard was afflicted with a heart trouble, great care was taken to break to her as gently as possible the news of her husband’s death.” It is the next few scenes that give us an inkling as to how she really views this death because she retreats to her room and instead of grieving, ponders on her life now that she had all the freedom in the world.

Even the train wreck is replete with vignettes from her own story. Kate has her own share of “train wrecks” in life. The deaths of her loved ones within a short period of time prove disastrous for her and derail her life. In a similar vein, for Chopin ‘s character, Mrs. Mallard, the train wreck her husband figures in signifies not so much as a tragedy but as the beginning of freedom for her. Chopin points out that Mrs. Mallard actually disdained her husband as she pens, “And yet she had loved him–sometimes. Often she had not. What did it matter! What could love the unsolved mystery, count for in face of this possession of self-assertion which she suddenly recognized as the strongest impulse of her being!” The character was portrayed in an understated state of joy amidst the apparently bad news of her husband’s death.

Reading Kate Chopin’s The Story of an Hour inspires driven women to write many literary pieces on the issues at that time. Change is highly valued by women today who feel that they are incorporating the best of the modern world into their lives. Open to ideas and innovation, women are receptive to those who can explain how change will benefit them, just like Louise in Kate Chopin’s work. They now walk a narrow bridge between the past and the future. They will reject visions of the future that only repeats the past. Indeed, the theme, the setting and the characters and some events of this story may well derive more from her own set of personal experiences translated poignantly in a short yet memorable story.

The Story of an Hour by Kate Chopin. (2017, Mar 20). Retrieved from https://studymoose.com/the-story-of-an-hour-by-kate-chopin-5-essay 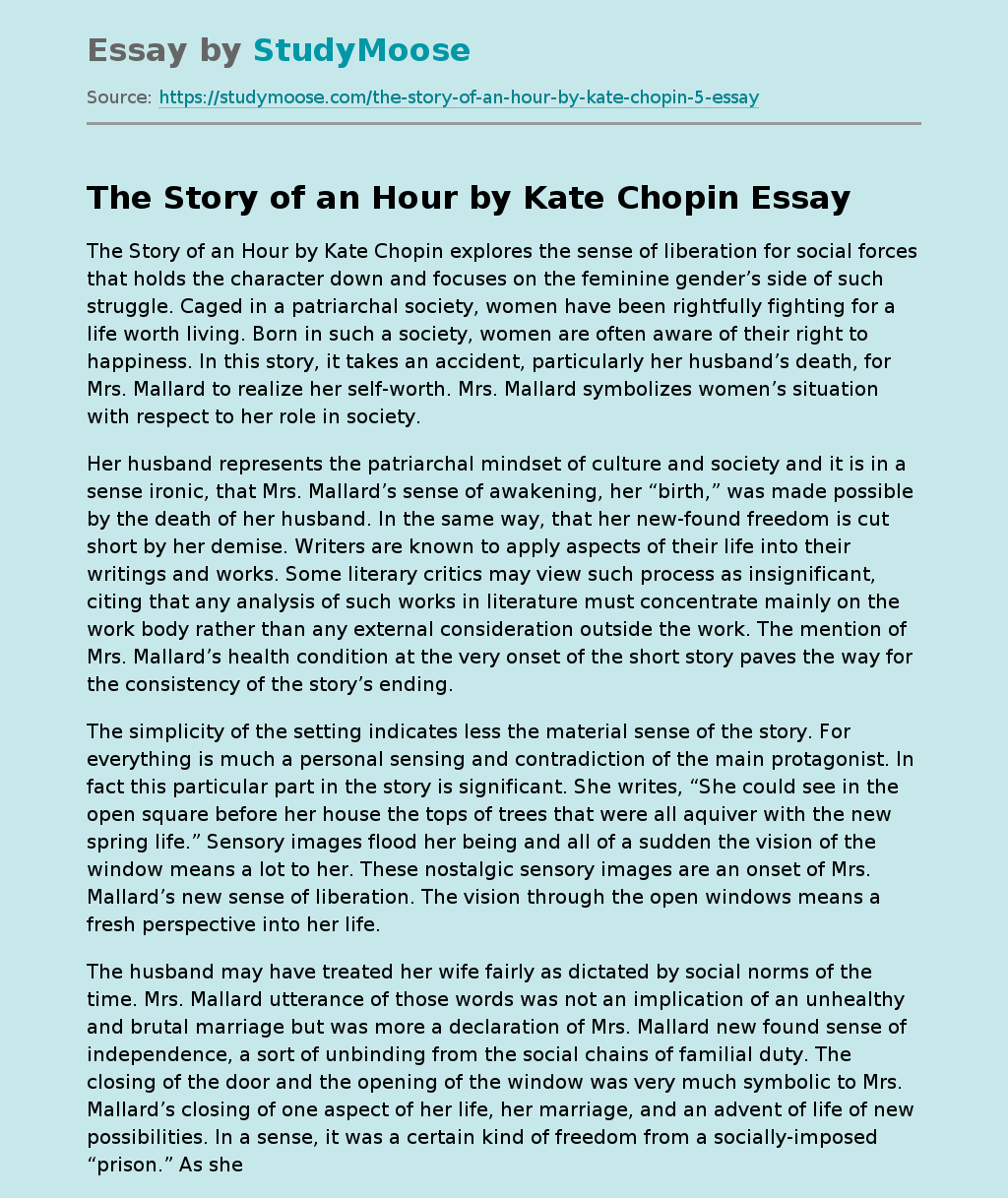