People are naturally imperfect. All humans in their natural state have a certain amount of hubris because they are flawed and tend to make immoral decisions based on what their egos tell them. Although people like to believe that they are selfless and do good deeds all of the time, that in itself is hubris because they think too highly of themselves. Pride and arrogance can blind a person from the truth, like the pupil in the poem “The Book of Wisdom” by Steven Crane, but the moment that a person realizes how knowledgeable he or she actually is…that is the moment that a person opens his or her eyes for the first time.

For example, suppose you thought you were really good at basketball because you always beat your little brothers at the game, but then you play with kids your own age, and you realize you are not as good as you think you are. The reason why you would make such a wrong assumption is because you have pride and arrogance like the protagonist in the tragedy Oedipus Rex.

In Oedipus Rex by Sophocles, hubris is the essential cause of Oedipus’ downfall because it is the reason why Oedipus killed King Laius, it prevents him from discovering the truth sooner, and it causes him to anger the gods.

The main reason why Oedipus killed Laius is because of the strong urge to protect his pride. When he tells Jocasta about how he was attacked by a man who fit King Laius’ description, Oedipus reveals, “The old man saw me / And brought his double goad down upon my head / As I came abreast.

/ He was paid back and more” (Sophocles 43). This demonstrates how his unreasonable pride is the first step to his destruction. Once he is provoked, he just loses control and makes the decision that would become the first step to fulfilling his prophecy and changing his life forever.

His hubris drives him to have an excessive reaction to a trivial matter that he could have just let go. If Oedipus had respectfully stepped aside instead of attacking Laius and his company, things would not have gotten so out of hand, and Oedipus would not have to worry about killing his own father. When he heard the oracle, he should have been wiser and made a decision not to kill anybody no matter what the circumstances, but his arrogance would not allow him to make the smarter decision.

Therefore, audiences would agree that his tragic flaw is his hubris, and not only does this imperfection compel him to sin, but it also makes it harder for him to realize what he did wrong. Oedipus’ hubris prevents Oedipus from discovering the truth about his family and his sins sooner by creating a wall between him and others’ reason and causing to assume the wrong things beforehand. For instance, when Teiresias accuses him of killing Laius, Oedipus furiously cries, “You dare say that! Can you possibly think you / have / Some way of going free, after such insolence? ” (19). Here, Oedipus conceitedness blinds him.

He does not want to admit to himself and especially the people of Thebes that he is the pollution, the murderer, and the abomination that is slowly destroying the country when he himself is the king. If he did not have such ignorance and believed in Teiresias’ words, perhaps he would have had more time to come up with a solution, like giving up the throne and quietly traveling to a country far away. Another example of how his hubris blinds him is when he talks about how he heard his terrible prophecy, for he smugly remarks, “I have kept clear of Corinth, and no harm has / come— / Though it would have been sweet to see my parents again” (52).

This proves that Oedipus is crippled by what he already knows and falsely assumes that he has already escaped from the prophecy involving his parents. If Oedipus did not always assume things, he would have been able to put the pieces together faster, and his anagnorisis would not have occurred after everyone else had figured out the truth. This habit of assuming things before inquiring about the whole truth also causes him to underestimate the gods and the Oracle’s abilities. 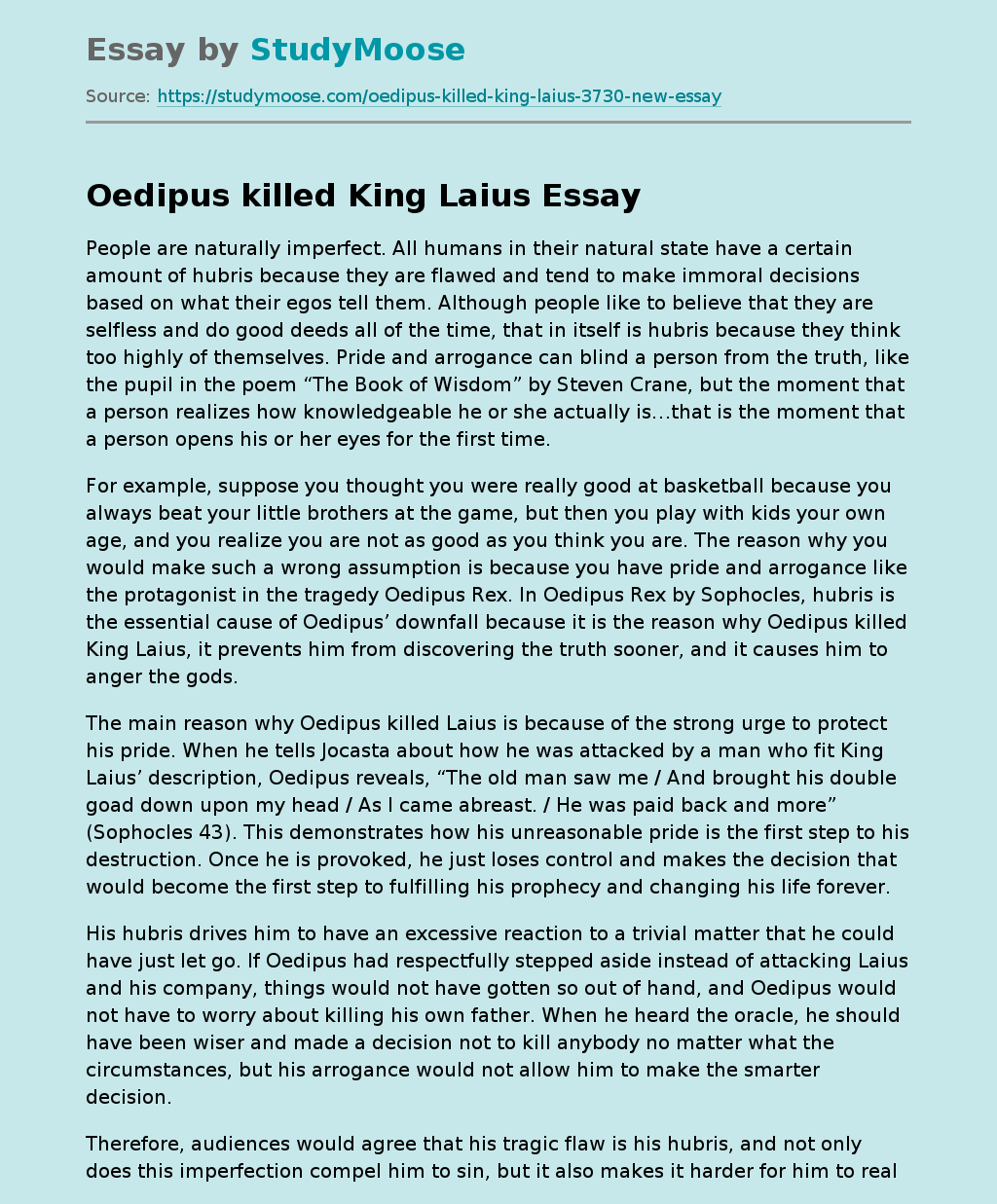