The Consequence of Oedipus’ Pride

Throughout history, all great fallen leaders have shared one common trait: an overinflated ego. Oedipus from Sophocles’ Oedipus the King is no different. From his beginnings as the prince of Corinth, Oedipus had always been held as a man of great status. After cleverly defeating the Sphinx to gain the rule of Thebes, he was considered more highly than ever, until his sense of arrogance grew to dangerous proportions. Eventually, this fatal flaw of pride effectuated Oedipus’ destruction by leading him to hunt down the murderer of Laius, ignore the advice of Teiresias, and disregard Jocasta’ fear of the truth.

Turn in your highest-quality paper
Get a qualified writer to help you with
“ The Consequence of Oedipus’ Pride ”
Get high-quality paper
NEW! AI matching with writer

From the very start, Oedipus doomed himself by launching a search for the killer of Laius in hopes of further establishing himself as a hero. When the people of Thebes begged Oedipus to find the root of the plague, he was all too eager to declare his greatness by saying, “Now you have me on your side, as is only right.

I shall be the defender of Thebes, and Apollo’s champion, too (Sophocles 12).”

The investigation for King Laius’ murderer serves as the central action of the tragedy, and from the onset it was doomed to end in Oedipus’ destruction. Blissfully unaware of this, he used diction such as “only right”, “defender”, and “champion” to reassure the chorus. These words all have boastful connotations and reveal Oedipus’ actual goal, which was to once again prove his own cleverness to the world. However, this plan backfired, and Oedipus was later faced with the bitter fact that he was the very murderer he had been looking for all this time.

Had Oedipus taken a more modest approach in his attempt to save Thebes, perhaps the Gods would not have been angered to the point of ruining his life. Teiresias hinted at this disastrous destiny by telling Oedipus that he was the killer of Laius, but Oedipus’ arrogant disposition made him discount the prophecy immediately. Instead of taking in the information and finding a way to right his wrongs with the Gods, Oedipus contemptuously told Teiresias that he “lives his life in one continuous night of darkness (Sophocles 23).

” This comment contains the element of irony, because although Teiresias was blind, Oedipus was the one who lacked insight. “Darkness” here could mean two things: an inability to see physically, or an inability to perceive the truth. The latter applied to Oedipus but his immodesty prevented him from realizing it. By having Oedipus make reference to a life spent in blackness, Sophocles is also foreshadowing the blinding of Oedipus at his own hands. Eventually, he became what he once mocked Teiresias for being. Had Oedipus swallowed his pride and listened to Teiresias instead of insulting the wise oracle, he would have known to stop his search for the truth before it led to his downfall. Another character that tried to prevent Oedipus from meeting his ruin was Jocasta, who pleaded with Oedipus to halt his search for information but gave up due to his arrogance.

Even after his wife rinsed her hands of him, Oedipus was still conceited enough to announce, “I count myself the son of Good Chance, the giver of success—I shall not be dishonored (Sophocles 62).” This statement is an example of irony because Oedipus was the opposite of fortunate and he was soon dishonored by the revelation of his unnatural deeds. It is also ironic that Oedipus called himself the “son of Good Chance” when he was actually the son of Laius, a man wretched enough to die at the hands of his own offspring. Oedipus’ words served to inspire a sense of pity in the audience, as they wondered how he will react when his foolish illusion of happiness is wrenched from beneath him.

This is the last chance Oedipus received to give up his pursuit for knowledge, but as with before, his hubris urged him to charge straight into his fall from grace. Ultimately, Oedipus had only his egotism to blame for the terrible destruction he suffered. It motivated him to initiate a hunt for the murderer of Laius, discount the oracles of Teiresias, and cast away the warnings of Jocasta. He serves as an example of how one deadly flaw can ruin the life of an otherwise noble man. Countless modern political leaders have fallen into the same trap of letting immodesty blind their insight and all must be careful to avoid a similarly unpleasant fate.

The Consequence of Oedipus’ Pride. (2016, Nov 08). Retrieved from https://studymoose.com/the-consequence-of-oedipus-pride-essay 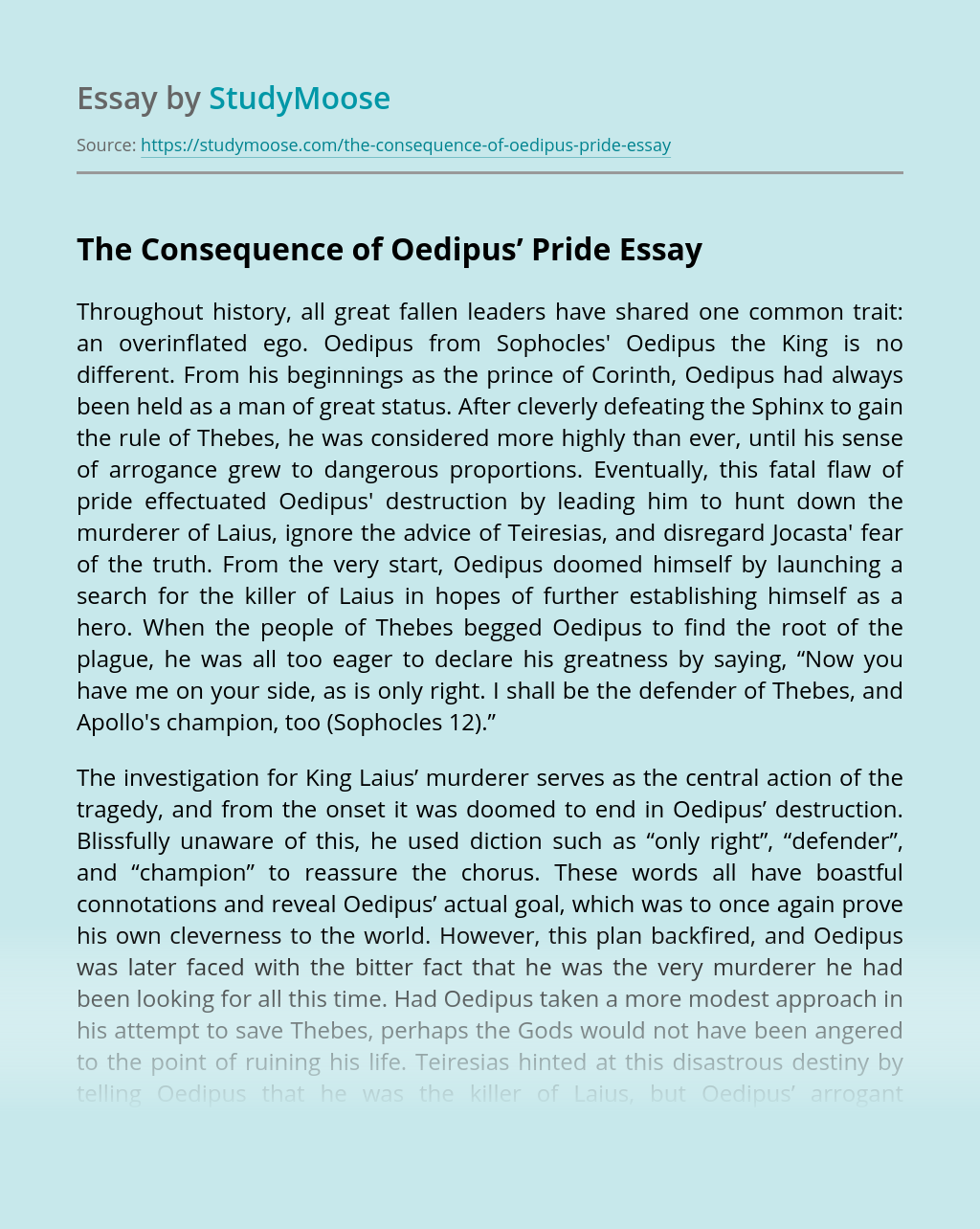 Turn in your highest-quality paper
Get a qualified writer to help you with
“ The Consequence of Oedipus’ Pride ”
Get high-quality paper
Helping students since 2015
Stay Safe, Stay Original