Hubris as a Major Element in Aeschylus’s Prometheus Bound

Aristotle created the basis for many different subjects including drama, politics and philosophy. Today, many of his works are constantly studied and his modern ideas are still prevalent in society. In Poetics, Aristotle focuses on the best kinds of tragic plot (Aristotle 20). One of the most important aspects of a perfect tragedy is hamartia, sometimes misinterpreted as tragic flaw. The true definition of hamartia is a fatal error committed by a character that results in a change of fortune. When a character commits hamartia, the audience is subjected to emotions such as sympathy, fear and pity.

Turn in your highest-quality paper
Get a qualified writer to help you with
“ Hubris as a Major Element in Aeschylus’s Prometheus Bound ”
Get high-quality paper
NEW! AI matching with writer

Although hubris is not explicitly mentioned in the translations of Poetics, it is one of the major causes of hamartia. When hubris is present in the environment, it affects the characters’ choices and decisions. Since hubris can be defined as extreme pride or self confidence (OED), taking advantage of those you have power over is an example of hubris. Fatal errors are committed when hubris is shown towards the character.

In the case of Prometheus, hubris brings about stubbornness and rebellion causing him to give the humans fire.

Hubris is a vital element in Aeschylus’s Prometheus Bound because it helps us understand why the characters behave the way they do. Since Prometheus is the central character as the play is titled with his name, it would be logical to base this essay around him. However, this essay is focused on how Zeus displays and suffers hubris.

While Zeus is not a character in the play, he is still a central force because he is constantly mentioned.

The play revolves around the fact that Zeus has punished Prometheus by chaining him to a rock. Even though he has no lines, the audience learns of his character through others. It is therefore perfectly valid to refer to him as a character and show how he exemplifies hubris.

Throughout the play, Zeus displays hubris towards the majority of the characters. He shows arrogance not only towards those he is angry with such as Prometheus, but also towards his servants such as Hephaestus and Hermes. All of Zeus’s subjects including Io and the brother of Prometheus are subject to the tyranny and wrath of their ruler (Aeschylus 8). One of Zeus’s hamartia is his lack of ability to have friends.

During the war between the Titans and the Olympians, Prometheus came to the aid of Zeus and helped him become the successful leader of the present world. Zeus however is so arrogant, that he does not take anyone including Prometheus as a friend regardless of the help he has received from him (Aeschylus 10). Therefore when Prometheus commits the fatal flaw of giving humans fire out of his own whims (Aeschylus 11), Zeus cruelly punishes him. Prometheus recognizes this when he states: “Behold in chains confined an ill-starred god/The detested of Zeus…” (Aeschylus 7). Zeus’ inability to have friends results in Prometheus being tied up. The cruelty Zeus shows towards Prometheus is an act of hubris.

Prometheus is not the only subject who faces hubris from Zeus. When Io appears, she enters with horns like a cow. Upon prodding from the Chorus, she proceeds to tell us her story. Not only is Zeus incapable of friendship, he is incapable of loving. He wanted to take away Io’s virginity. When her father kicked her out of the house, Zeus turned her into a cow. A gadfly follows her around as a punishment causing her distress and pain (Aeschylus 29). Zeus abuses his power towards both Io and her father threatening that “if he disobeyed, the bolt of Zeus would visit him…” (pg 29). Since Zeus is in a position of power, he chooses to invoke fear on those he rules over for personal gain.

Those who serve Zeus are also unfairly treated. Since Zeus is incapable of friendship, he chooses to operate through fear as opposed to friendship. Hephaestus is one of the servants who does what he is told but clearly shows his displeasure in carrying out Zeus’s commands. Zeus demands him to tie up his friend Prometheus. He tells his fellow servants, “I have not the heart by force to bind/A god, my kinsman, in this wintry glen.”. He goes on to say that he “must brazen” himself to do so (Aeschylus 1). This shows us that he is obliged into following Zeus. Zeus takes advantage of those who serve him by using his power to force them to obey his command.

Brief references are made to other people Zeus has oppressed. Atlas, the brother of Prometheus represents the many people towards whom Zeus abused his power. This Titan is also bound by Zeus and Prometheus weeps for him. This shows that hubris is so closely entwined in the nature of Zeus that he afflicts everyone in his power with it.

Upon examining the play as a whole, it can be argued that Zeus also faces hubris. Since the play is mainly from Prometheus’s viewpoint, there is a bias towards how Zeus is viewed. This does not compensate the actions of Zeus, but shows that the play is one-sided and Zeus cannot defend himself. This form of hubris is an expansion of Aristotle’s original concept. It is a form of irony because only the audience knows Zeus is misrepresented. Prometheus has the power of speech unlike Zeus. Since Zeus is not present to share his view, hubris is shown towards him by portraying him so cruely.

Reading Aristotle’s Poetics before reading Prometheus Bound helped me understand why Aeschylus wrote the play the way he did. Had I not read Aristotle before, it would have baffled me as to why Aeschylus would allow for the audience to know Prometheus will eventually be freed. However, now I know that the point of the drama is not to surprise the audience, but to invoke emotions such as pity and fear. I found it much easier to concentrate on one concept of Aristotle and apply it to the play as opposed to applying all of his terms. When I first read Prometheus Bound, Aristotle’s ideas were still fresh in my head. However upon examining the play further and re-reading it while looking for a specific concept, I found that I had missed many things. One of the reasons for this is that I was reading the play instead of watching it.

Although this allowed me to re-read anything I did not understand, I could not visualize the actions as much as I would have been able to had I been sitting in an audience. Another reason is the language of the text. Since this play has been translated, it took a lot of effort and constant cross-referencing to understand all the finer details in the play. Because of this, most of my energy was being focused onto understanding the play instead of making connections. While concepts such as hubris are universal in plays and in real life, the way we identify them is constantly changing.

Today we may feel the way Zeus treated Prometheus was unjust. However, the question remains if it was considered unjust in the time Prometheus Bound was written. Just like how we cannot use civilization chauvinism when interpreting Japanese plays such as Madame de Sade, we should not use historical chauvinism in interpreting older plays. The views I have presented towards how Zeus displays hubris is valid based on how the world is today and my view of the world. While the definition of hubris remains the same, whether pride, arrogance and tyranny are being shown according to its social context remains to be questioned.

For example, women never used to have the right to vote and in fact were not even considered persons by law. At that time, it was perfectly common in society. Today, to say such a thing would be sexist and discriminatory and we could consider women’s lack of suffrage as an example of hubris. The concept of oppression and inequality existed before women had the right to vote, but at that time, it was socially not considered discrimination or oppression. Similarly, treating servants and subjects unfairly through pride and arrogance will universally be considered as hubris. However, it is possible that at the time of Aeschylus, treating those one has power over unfairly was socially accepted.

Hubris as a Major Element in Aeschylus’s Prometheus Bound. (2017, Apr 02). Retrieved from https://studymoose.com/hubris-as-a-major-element-in-aeschyluss-prometheus-bound-essay 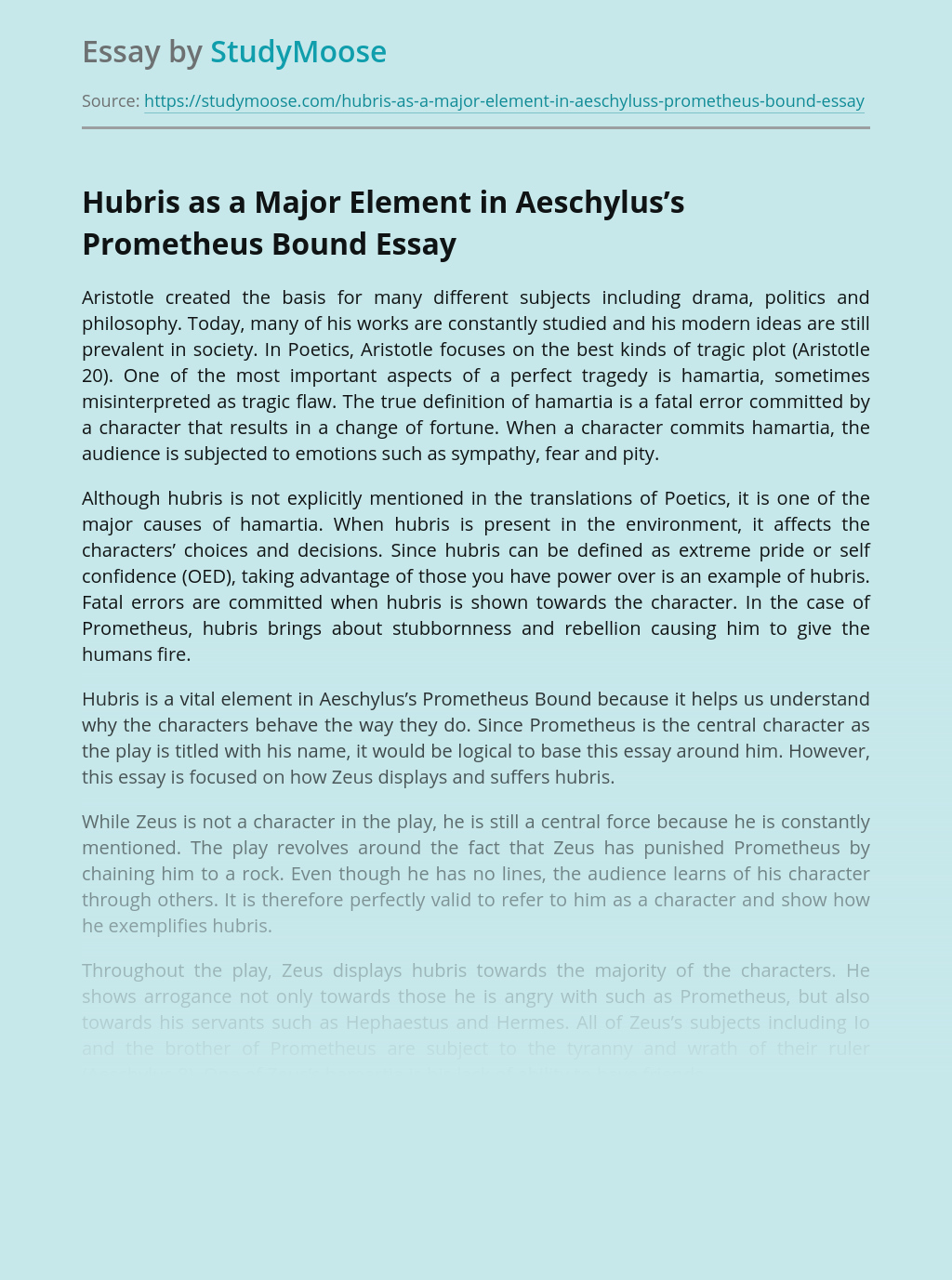 Turn in your highest-quality paper
Get a qualified writer to help you with
“ Hubris as a Major Element in Aeschylus’s Prometheus Bound ”
Get high-quality paper
Helping students since 2015
Stay Safe, Stay Original