Oedipus the King is considered one of the greatest classical tragedies ever written. When Sophocles wrote this great play, he followed the concept of tragedy which dictated that the tragic hero should embody a tragic flaw in his character which acts as a motivation for the character’s eventual downfall. In Oedipus the King, the tragic flaw of the play’s hero, Oedipus, is centered on the concept of hubris, or excessive and destructive pride.

Oedipus, through his pride, ultimately experiences the worst tragedies that can befall an individual; however, if the events of the play are examined closely, each of the tragic events can in some way be connected to Oedipus’ pride.

One key example (in the myth of Oedipus which provided background for the play) is when Oedipus unknowingly murders his own father.

Despite being warned by the oracle that he was destined to “shed with his own hand” his father’s blood, Oedipus quarrels with Laius on the road to Thebes over whose wagon had the right-of-way and his ultimate anger fueled by hubris led Oedipus to unwittingly murder his own father.

After solving the Sphinx’s riddle and unknowingly marrying his own mother, Oedipus, as King, must face a plague which is threatening Thebes. The plague was sent as a form of revenge by the gods because of Laius’s murder. To help him find out the reason behind the plague, Oedipus consults a prophet named Tiresias, who is blind. When the prophet warns Oedipus to stop seeking the true murderer of Laius, Oedipus’s pride leads him to suspect Tiresias of treachery and dishonesty.

Even though Oedipus has been warned all along about hsi destiny, he continues to try to control fate and therefore becomes further and further entangled in tragedy. It is his excessive pride that drives him to refuse to listen to the wisdom of those around him, even prophets. Eventually, Oedipus says during the play that he is superior to the gods, and this is a blatant expression of his hubris:“You pray to the gods? Let me grant your prayers” (Oedipus, 254).

By saying this, it is clear that Oedipus considers himself even a greater power as king than the god themselves. A central part of the impact of Oedipus’s hubris is the dramatic irony which takes place in the play. The irony of Oedipus not knowing that he has murdered his own father and married his own mother and the irony that he is in fact the one responsible for the plague on Thebes and that his desire to rid the land of Laius’s murderer would lead to himself are all possible because of Oedipus’s extreme pride.

He is oblivious to the possibility that the oracle’s predictions or the words of the blind prophet could indicate anything other than the elevation of his own glory and strength that his eventual tragic fall actually begins simultaneously with his rise to kingship and power, with the audience seeing the irony. The reason that Sophocles created such an ironic level of expression for the extreme hubris of Oedipus was to demonstrate to his audience that a great tragedy is always created by the inner-flaw or weakness of its main character.

The Greeks regarded pride or hubris as one of the most common and dangerous of personal flaws and this play demonstrated for them and also for modern audiences the impact of excessive pride when carried to extreme levels of power and influence, although the lessons learned in the play are also applicable to common people in their everyday lives. By using irony, exaggeration, and an epic scale of symbols, Sophocles was able to present his audience with a frightening portrayal of the negative impacts of hubris or excessive pride. 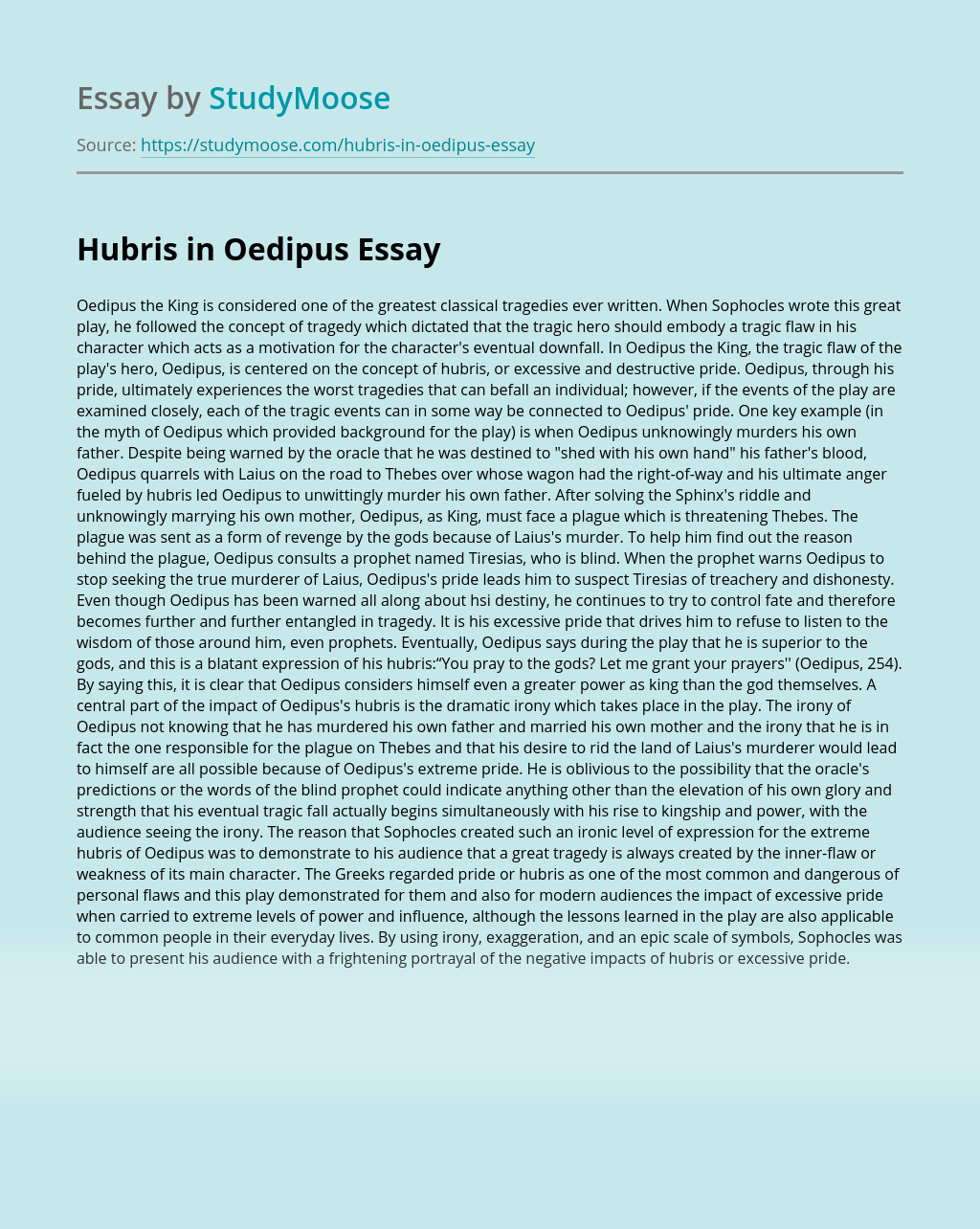