Oedipus the King as a Tragic Hero

In its simplest definition, a tragic hero is the main protagonist in a tragedy who commits an error or a mistake that subsequently leads to his or her downfall. Although historically, there have been a lot of plays with tragic heroes, possibly the most notable among them is Oedipus the King. In the play Oedipus the King, the protagonist exemplifies traits that a tragic hero possesses as shown in his various actions throughout the plot.

Don't use plagiarized sources.
Get Your Custom Essay on Oedipus the King as a Tragic Hero Just from $13,9/Page

One of the traits that make Oedipus a tragic hero is his good nature, his social position, and his true to life consistency.

As shown in the play, Oedipus is someone of royal lineage and has helped a lot of people by solving the riddle of the Sphinx. This is further attested by the chorus in the play which said “People of Thebes, my countrymen, look on Oedipus. He solved the famous riddle with his brilliance, he rose to power, a man beyond all power.

Who could behold his greatness without envy” (Johnston n. p. )? These traits are in accordance with the definition of a tragic hero.

However, it is his predetermined fate coupled with the error in his actions that prove why he is a true tragic hero. In the play, he unknowingly kills his biological father, Laius, and marries his biological mother, Jocasta, thereby fulfilling the prophecy of the Oracle at Delphi. Upon realizing the reality of his actions, he stabs his own eyes and forced himself into exile, which signifies his fall from grace and fortune. His erroneous action is mainly his excessive pride, which made him initially ignorant of the fact that he killed his own mother and father.

However, the true tragedy in Oedipus life is that his fate was seemingly predetermined for him as he did not know that the person he killed on the way to Thebes was his father, and the woman he married is his mother. In other words, he was not in control of his own fate which makes him truly a tragic hero. Works Cited Johnston, Ian. “Sophocles, Oedipus the King. ” 2009. Malaspina University College. 6 May 2009 <http://records. viu. ca/~johnstoi/sophocles/oedipustheking. htm>.

Oedipus the King as a Tragic Hero. (2016, Aug 31). Retrieved from https://studymoose.com/oedipus-the-king-as-a-tragic-hero-essay 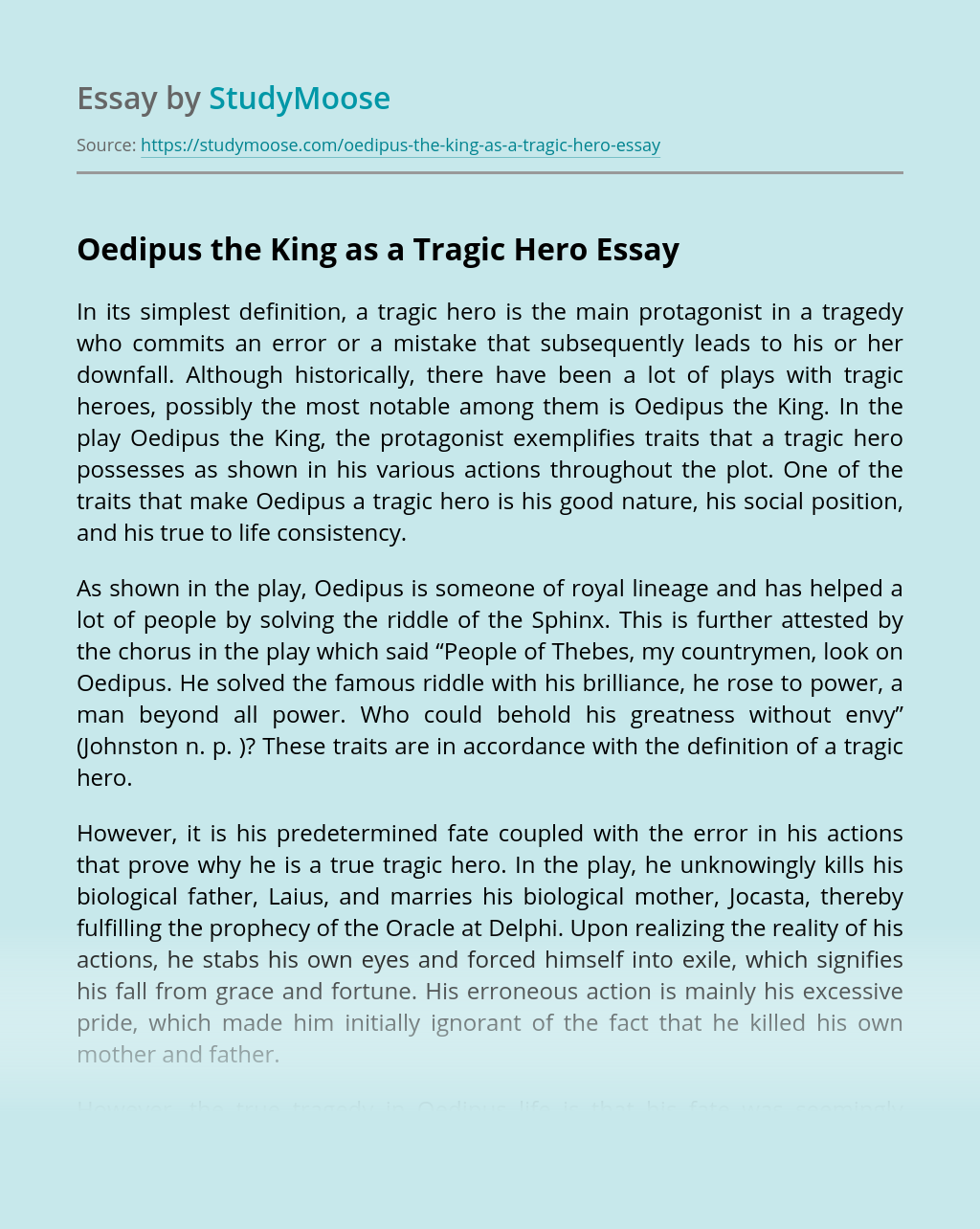 Rate this post Nora Helmer, the central character, wife of Torvald, and mother of three children, is indeed a classical hero in Isben’s A Doll’s House. She was hiding her character and personality throughout the play under the pretense of the ‘ideal 19th century wife’ who completely abides to her husband. The character of Nora...

Get Essay
My Childhood Hero

Rate this post Every child has a hero, someone they look up to, someone who guides their thoughts and influences their life. My childhood hero was Belle from the fairytale, The Beauty and the Beast. As a child, I watched the movie end to end and read the book countless times, losing myself in her...

Rate this post When envisioning the ideal hero, a person might picture a selfless individual, one who shows bravery in the face of defeat and is willing to beat the overwhelming odds. Often times, a hero is an everyday person who with one selfless act proves them a strong individual. Heroes are not born a...

Rate this post In the intellectual history of Europe, Johann Wolfgang yon Goethe is central to the development of Romantic thinking, which was contemporary in his day. Goethe attempted to see the world in a new light; he reconsiders old questions of good and evil, as well as questions about human nature. The story of...