A defining trait of an epic hero is being born a king, prince, or noble. Or, on the contrary, some scholars say that the character must gain their nobility through battling a foe. Oedipus can fit into both of those categories. He was born to Queen Jocasta and King Laius of Thebes, which would mean he was born into nobility. He also became the King of Thebes when a sphinx came to the kingdom and would not let anyone leave until they solved his riddle.

Don't use plagiarized sources. Get your custom essay on
“ Oedipus Tragic and Epic Hero ”
Get custom paper
NEW! smart matching with writer

Once Oedipus solved the riddle he was given the crown. This being said, only in very rare occasions are epic heroes commoners.

Another trait of epic heroes is humility. Oedipus is a very gracious and kind King. At the beginning of Oedipus Rex, he is willing to do anything to save the city of Thebes from the plague. He is quoted saying, “Must I tolerate this insolence from him? Get out, and may the plague get rid of you! Off with you! Now!” (Lines 518-520) This shows that he is very passionate about shielding the people of Thebes from this deadly plague.

Which also exemplifies how badly he wants to keep his people safe. Another action that shows humility was when he found out that he was the one who killed Laius. Earlier in the play he swears, “the only cure

for this infecting pestilence is to find the men who murdered Laius and kill them or else expel them from this land as exiles.” (Lines 363-366) Later in the tragedy, once he finds out that he is the son and murderer of Laius, he keeps his promise of exiling the murderer of the former King.

Even though it means his imminent death, he is willing to put himself in danger to save his people.

One of the more common traits found in epic heroes is having supernatural aid. In Oedipus’ case this comes in the form of an oracle. Tiresias, the oracle who helps the King find out his fate, is the blind prophet of Apollo. The aid that Oedipus receives is what helps him figure out he is the murderer of Laius. Tiresias is quoted saying, “You are all ignorant. I will not reveal the troubling things inside me, which I can call your grief as well.” (Lines 392-395) This quote shows that the blind prophet knows Oedipus’ secret, but he wishes not to say it in fear of hurting the King. That quote leads to Oedipus questioning himself and where he comes from. This guides him to what will ultimately help him save the Kingdom of Thebes.

In conclusion, many consider Oedipus a tragic, and epic, hero. A reason being, he has many of the traits of an epic hero. Some of which are nobility, humility, and receiving supernatural aid. 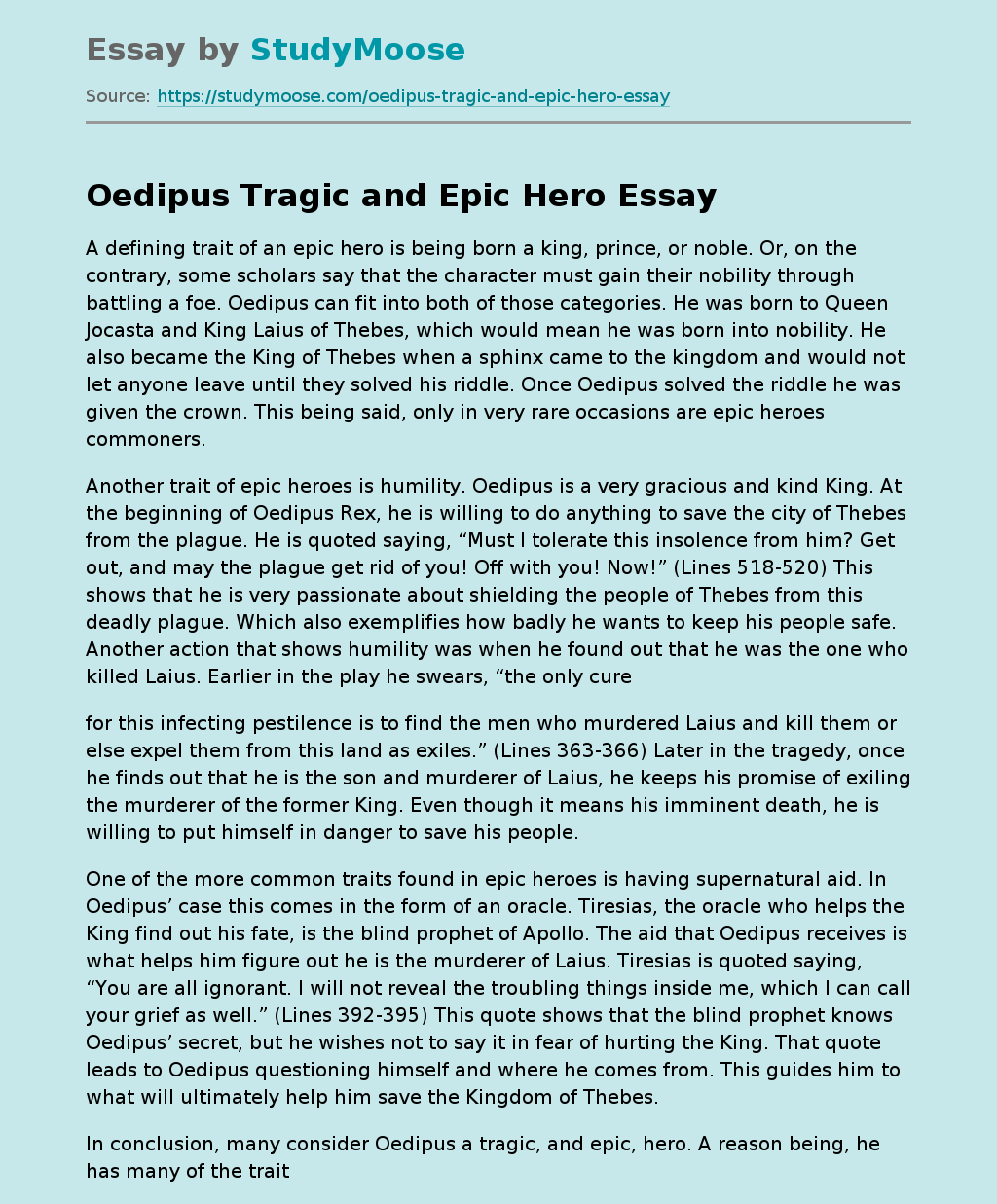