Using examples from the play, is there a hero in King Lear? If so, who is it and why? If not, why is there no hero in the play? The play of King Lear is one of William Shakespear’s greatest tragic stories written during the Elizabethan Golden Age. The play tells about a tragic hero King Lear, his blunders in actions and decisions, which come in the protagonist’s realization of the consequences of his mistakes. According to Aristotle’s expectations of a tragic hero: a character is usually of noble birth, then a character makes a fatal mistake which leads to unavoidable consequences, after that comes tragic recognition or insight, causing feelings of pity and fear of the audience.

Don't use plagiarized sources. Get your custom essay on
“ The Tragic Hero In Shakespeare’s King Lear ”
Get custom paper
NEW! smart matching with writer

In the play “King Lear” King itself can be considered as a tragic hero. At the beginning of the play, the theme of blindness can be seen. Lear, as seen in Act I, has everything a man should want – wealth, power, peace, and a state of well-being.

King Lear’s making fatal mistakes were ignoring Cordelia’s concerns and banishing her for truth. “…Why have my sister’s husbands, if they say They love you all? Happily, when I shall wed, That lord whose handouts take my plight shall carry Half my love with him, half my care and duty: Sure I shall never marry like sisters, To love my father all…” King Lear wasn’t able to recognize her concerns and let his arrogance to banish his most beloved daughter.

Lear even didn’t stop there and decided to banish Earl of Kent for his boldness in daring to condemn King’s decisions. His actions are not followed by any corruption or depravity in him, but rather an error in his judgment, which does question his authority as the King. The division of the kingdom was utterly irrational decisions of King Lear, which was also highlighted by Fool. “…If I gave them all my living, I’d keep my coxcombs myself. There’s mine; beg another of thy daughters…” “…That lord that counsell’d thee To give away thy land, Come place him here by me  Do thou for him stand…” “…if I had a monopoly out, there would have part on’t: ladies too, they will not let me have all the fool to myself; they’ll be snatching…”

Without his lands, King Lear isn’t a King rather than just an old man, who was abandoned by his two elder daughters. Throughout the rest of the play, the consequences of those errors slowly and steadily increase until Lear is destroyed. One of the aspects of a tragic hero is the protagonist’s downfall, it is happening during the end of Act 1, where King Lear had started losing his authority as the King. His oldest daughter ordered to act rudely towards the King, while she was trying to avoid him. For more information, even a knight of King emphasizes that: “…My lord, I know not what the matter is; but, to my judgment, your highness is not entertain’d with that ceremonious affection as you were won’t; there’s a great abatement of kindness appears as well in the general dependents as in the duke himself also and your daughter…” those lines not only represents Fool’s jokes, yet also shows again theme of blindness, when even regular knight can see throughout the whole situation.

The true protagonist’s realization comes in Act 1 scene 4, where Lear asks his identity: “…Does any here know me? This is not Lear: Does Lear walk thus? speak this? Where are his eyes?…” Lear has realized that he is not treated as the King anymore; furthermore, in the Act 2 the main protagonist couldn’t keep his knights and have utterly lost his authority in the eyes of his daughters Regan and Goneril. “…I prithee, daughter, do not make mad: I will not trouble thee, my child; farewell We will no more meet, no more see one another…” All those actions are leading to his madness: “…O Fool! I shall go mad…”, as a tragic hero, he has faced his repercussions, which are madness, misery and losing his title. Nevertheless, his decisions are not followed by any corruption or depravity in him, but rather in an error of his judgments, which cause sorrowful and pity feelings of the audience. Despite all of that, King Lear has encountered his fatal mistakes, consequences, and realization, which makes him a truly tragic hero by Aristotle’s expectations. 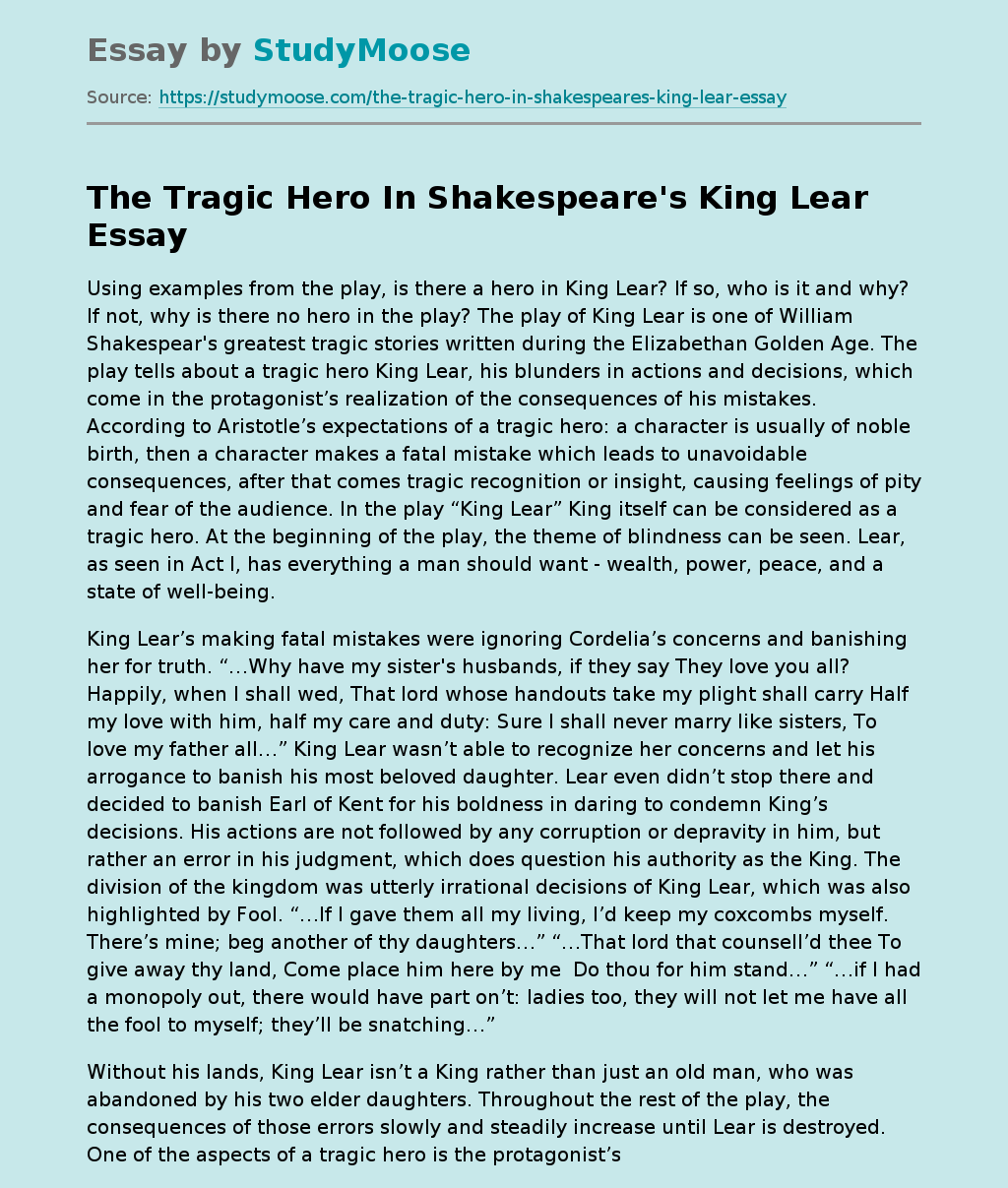