An Analysis of the Tragedy King Lear by William Shakespeare

Shakespeare’s King Lear is a tragedy that recounts the story of King Lear, and his fall from revered king of England, to his death as a madman. His quick and emotionally driven decisions, the biggest of which is banishing his beloved daughter Cordelia, leads to his demise. In parallel to King Lear’s fall, is the rise of Edmund, the bastard son of the Duke of Gloucester. Edmund’s expertise in manipulating the opinions and actions of those around him, gained him great power and authority.

Don't use plagiarized sources. Get your custom essay on
“ An Analysis of the Tragedy King Lear by William Shakespeare ”
Get custom paper
NEW! smart matching with writer

Throughout the play, the idea of ‘nothing’ is integral.

The concept of nothingness in King Lear represents dysfunction and dispute within England’s royal family. The king of England is left with nothing, no family, no wealth, no power and no mind, the Duke of Gloucester is left with nothing to live for and no family, and Edmund’s anger towards having nothing of his father’s fortune or title consumes him and drives his actions.

King Lear, at the beginning of the play, has all that anyone can ask or hope for. He is the ruler of England, and has the most power and wealth among his people. However, he begins his downfall when he decides to split his wealth amongst his three daughters, based solely upon their expression of love towards him. His two eldest daughters tell him what he wants to hear, saying things such as “Sir, I love you more than word can wield the matter” (Goneril, I, i, 57) and “… I am alone felicitate/In your dear Highness’ love.

” (Regan, I, I, 77-78). Cordelia counters her sisters’ great expressions of love with three simple words, “Nothing, my lord” (Cordelia, I, i, 89). This statement will forever change the dynamic between father and daughters. In his anger, Lear banishes Cordelia, marrying her off to France, and splitting the kingdom evenly between Goneril and Regan.

“King Lear’s failure in understanding the reality of “Nothing” uttered in the opening scene by his youngest and most faithful daughter Cordelia derives first and foremost from the ignorance of his own true nature.” (Goro, 89) Lear denies the reality of nothing, the truth for which he is destined for, due to his stubborn and emotionally driven attitude. The irony in this exchange is that Goneril and Regan felt nothing for their father, as they utter lies to receive everything their father has, while Cordelia, who feels genuine love for her father, is given nothing. Lear then settles into the household of Goneril with a posse of one hundred knights and a fool. Lear’s fool’s witty remarks subtly shed light into the nothingness Lear is driving himself and his wealth into: “Even the kinds of division into nothing with which the play opens become part of the wise-foolery.

The Fools riddle – “Nuncle, give me an egg, and I’ll give thee two crowns” – turns out to have an answer that implies the usual division into nothing: “after I have cut the egg i’th’middle and eat up the meat, [you’ll get the two crowns of the egg. [T]hou clovest thy crown i’th’middle, and gav’st away both parts.” (Taylor, 33) Here the fool uses his wit to show what Lear had done, through the use of a metaphor: Cracking an egg, “eating its meat”, and splitting the “crowns of the eggs.” The “division into nothing” is representing the division of the crown between the Duke of Albany and Duke of Cornwall, the husbands of Goneril and Regan respectively, implying that Lear divided the crown to the point where it was redundant. The fool also says a harsh, albeit true, statement to Lear, “I am better than thou art now: I am a Fool, thou art nothing.” (Fool, I, iv, 199-200)

This statement is overlooked by Lear, but it is an eerie pointer towards his ultimate fate, where he will die with nothing, no sanity, no wealth, and no family. The duke of Gloucester, much like King Lear, is a man of high stature and great wealth. He has two sons, Edgar and Edmund, the latter being illegitimate. He claims to love both equally, “But I have a son, sir, by order of law, some year elder than this, who yet is no dearer in my account.” (Gloucester, I, i, 19-21) Due to Edmund’s bastard status, he is not entitled to any of his father’s inheritance, as it will go completely to Edgar. We see nothingness seep into the exchanges of Gloucester and Edmund: “… mirroring Lear in Gloucester and again whispering ominous nothings in our ears. “Edmund, how now!” Gloucester exclaims. “What news?” Edmund, ostentatiously concealing the forged letter designed to incriminate Edgar, replies that he knows “none,” that “I know no news, my Lord,” and that the “paper” is “Nothing, my Lord.” “No?” asks Gloucester; “the quality of nothing hath not such need to hide itself. Let’s see: come; if it be nothing, I shall not need spectacles.”” (Tayler, 21)

Gloucester falls for Edmund’s tricks and demands to see the letter in his hand. The letter, being a forgery, is truly nothing, as Edmund states, but Gloucester does not know that. The letter will cause ‘something to come of nothing’as it will forever change the relation between father and sons. Edgar will be villainized because of nothing, while Edmund will use ‘nothing to gain his father’s respect, as well as his power and wealth. Gloucester realizes his mistake after he learns that his beloved son Edmund is behind the gouging out of his eyes, “O my follies! Then Edgar was abused. Kind gods, forgive me that, and prosper him.” (Gloucester, III, vii, 92-93) This realization of the truth dawns upon Gloucester the reality of what he has done. He has no power or wealth, he has wronged one of his son’s while the other betrays him, and he has lost his sight. He, in short, is nothing. Edmund begins with nothing. He has the ominous cloud of illegitimacy hanging over his head everywhere he goes. His father, though he did not admit to it, is embarrassed of him.

Since he is a bastard, Edmund has to no claim to his father’s fortune. “…the rights and incapacities which appertain to a bastard. The rights are very few, being only such as he can acquire; for he can inherit nothing (w), being looked upon as the son of nobody…” (Blackstone, 385) The English law dictated that Edmund did not have the legal right to any of his father wealth, which is plenty as he is the Duke of Gloucester. Everything will go to Edgar, and Edmund will be left with nothing. This drives Edmund’s anger, and he questions why he is being punished for something that is not his fault: “For that I am some twelve or fourteen moonshines/Lag of a brother? Why “bastard”? Wherefore “base”?/When my dimensions are as well compact,/My mind as generous, and my shape as true” (Edgar, I, ii, 4-8) He questions why he is labeled a bastard when he is as physically and mentally capable as his legitimate brother Edgar.

This motivates him to take matters into his own hands and make something of himself. He uses the forged letter to tarnish Edgar’s name, as well as use the affection of both Regan and Goneril to his advantage by using their political influence to gain power and assert his plans. Edmund goes from being nothing, to leading the British army into war. This power is short-lived however, as Edmund, like many within the play, still ends up with nothing, as he dies at the hands of his own brother, Edgar. To conclude, the concept of nothingness in King Lear plays a large role in dictating the family dynamics and relationships amongst Britain’s royal family. King Lear’s denial of nothing leads to his great downfall and demise, Gloucester’s belief in his son leads him to have nothing, and Edmund’s refusal of accepting nothing shows the importance of the concept within the play.

The events of King Lear show that, contrary to its definition, nothing is, in fact, something quite extraordinary. Only theoretically does nothing truly exist; in reality ‘nothing’ has adverse effects. Whether it be having nothing in terms of family, wealth, or authority, ‘nothing’ still causes physiological effects, which, in turn, translate into something, through the actions required to remove ‘nothing’. Lear states, to begin his saga into ruin, “Nothing will come of nothing.” (Lear, I, I, 93), a statement which is proved wrong, as quite a lot comes of nothing.

An Analysis of the Tragedy King Lear by William Shakespeare. (2021, Sep 15). Retrieved from https://studymoose.com/an-analysis-of-the-tragedy-king-lear-by-william-shakespeare-essay 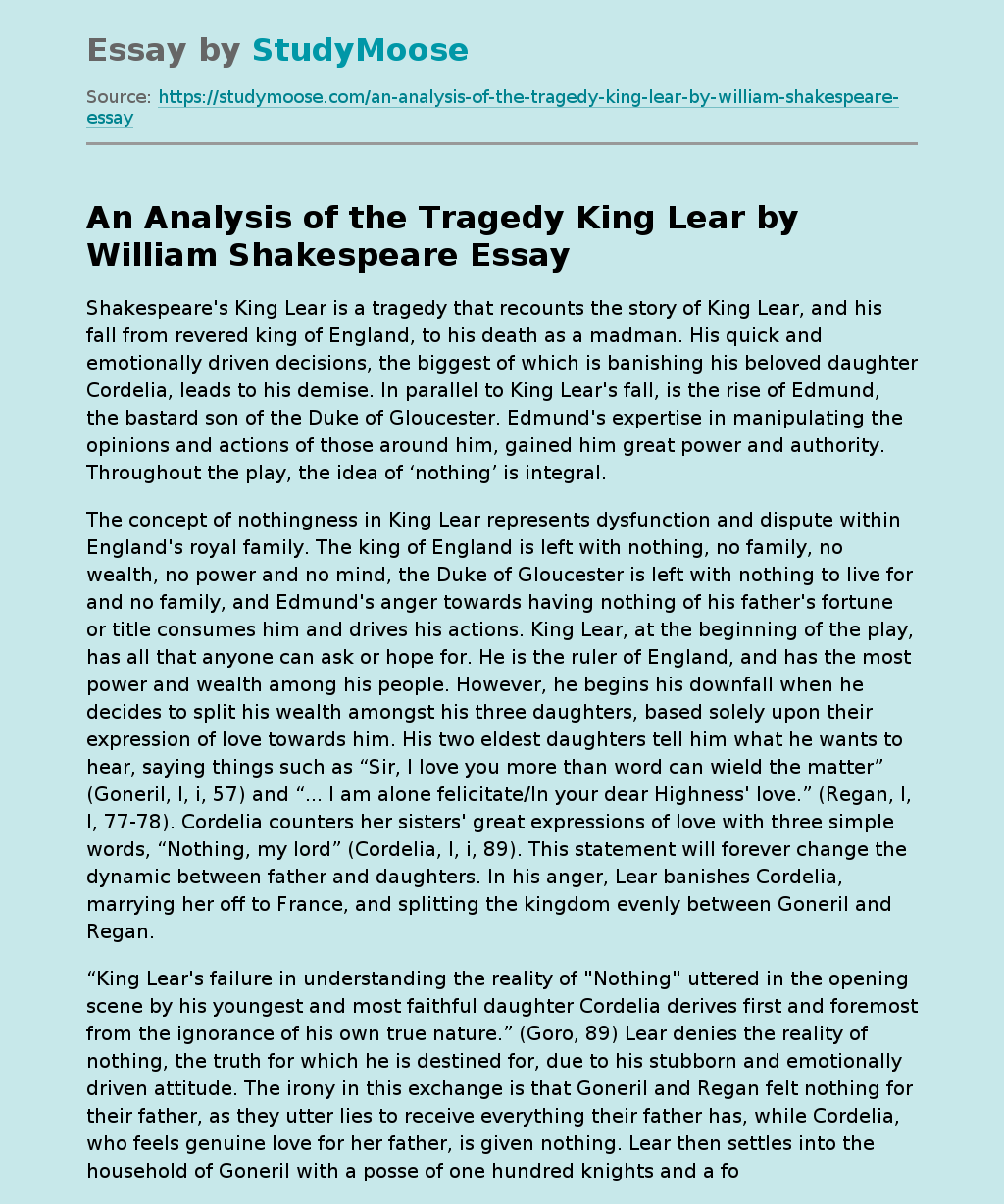