King Lear: The seeds of tragedy are sewn in Act 1 scene 1

According to Aristotle a tragedy should consist of a tragic hero; a character of noble status possessing a fatal flaw. He proposed that the hero’s downfall should be a result of his own actions and that he should have a chance to learn from his mistakes during the play. Aristotle’s theory of a tragic flaw is designed to allow the audience to engage with the hero, regardless of the character’s higher status or power.

This view also suggests that a tragedy is a play which causes pity and fear amongst the audience for the tragic hero; in Shakespearean tragedies the Hero’s flaw is often lust or ambition, which an audience is able to identify with therefore the hero’s demise causes the reader to sympathise with the character more.

Don't use plagiarized sources. Get your custom essay on
“ King Lear: The seeds of tragedy are sewn in Act 1 scene 1 ”
Get custom paper
NEW! smart matching with writer

During Shakespearean time, king ship was considered to be granted by God. As a result it was believed that the down fall of a king would result in the destruction of society.

Expanding on this further, a Shakespearean audience would have viewed the king as being incapable of making poor decisions therefore Lear’s tragedy may have been considered as an ‘accidental tragedy’. There are many events in the opening which result in a series of tragic occurrences later on in the play. When Lear gives away his authority to Goneril and Regan, he leads himself to cruel treatment. As a result, his people are also plunged into corruption and disorder. The authority that Lear represents falls apart in the very opening act making tragic events inevitable.

However, it could be argued that by dividing the kingdom before his death, Lear is preventing chaos which would occur after his death. Handing his kingdom to his daughters symbolises trust and acceptance in the first scene. It is suggested that Lear’s descent begins with the love test. “…. ’tis our fast intent To take all cares and business from our age, Conferring them on younger strengths, while we Unburdened crawl toward death. ” Lear’s need to be reassured of his own importance indicates his weakness and flaw implying he is a tragic hero and therefore tragic events are to follow.

The verb ‘crawl’ has connotations of an animal, this foreshadows the confusion and animal like mental state Lear is to be plunged into. Stanley Cavell proposed that Lear’s wish to avoid revealing his inner self and his love motivates the love test, thus causing his tragic downfall. It could be argued that the avoidance of revealing his inner self, leads Lear into a very emotional stage, therefore, it is necessary for him to give away his Kingdome and undergo the tragic events in order for him understand himself.

Paul Scofield, in Peter Brooks’ version of ‘King Lear’, presents Lear as a more dominant and less vulnerable character in the first scene. The close-up camera shot causes the audience to feel that Lear is of great importance. People who we trust usually get close to our face, so the close up shot creates a relation ship between the viewer and Lear, which allows the audience to identify with Lear more. This incorporates Aristotle’s perception of a tragic hero. However, at the same time, the viewer is made to feel more uncomfortable than at ease.

This causes the audience to discover that Lear is tired of life and consequently less thoughtful of what he’s about to do, suggesting tragic events are inevitable. From this angle it seems that Lear has less to fall, as he is already at a stage were he regrets life. This is different to many of Shakespeare’s other plays such as Hamlet, Macbeth and Othello where the protagonists begin in a high emotional position, so have more to lose and therefore further to fall.

Some readers and critics would argue that it is not entirely Lear’s love test that causes the inevitable events, but Cordelier’s refusal to go along with the love test as she is aware of the cruelty of her sisters. Psychologist, Sigmund Freud discussed, in his essay ‘The Theme of three caskets’ [1], the symbolism of Lear’s daughters. He proposed that they represented the three fates of Greek myth. Cordelier symbolises, Atropos the goddess of death, so consequently by rejecting Cordelier Lear rejects death.

Cordelier’s reluctance to speak is associated with dumbness, which psychoanalysts interpret as a symbol of death in dreams [1]. This reference to death in the first scene emphasises that tragic events are unavoidable. Language in act one scene one foreshadows in King Lear the events to occur, suggesting the inevitability of tragic events. Lear’s downfall begins when he asks his daughters to show their love for him through language, the untrustworthiness of the language suggests the likelihood of tragedy. The noun ‘nothing’ is said several times in the opening.

The word creates a feeling of emptiness; an emotion that causes Lear’s madness, yet at the same time suggests that ‘nothing’ may be of more worth to Lear than everything. Gonerill and Regan say everything Lear wants to hear but Cordelier, who says ‘nothing’ is of more use to the king than his unworthy daughters. This also creates irony, as Lear is left with nothing in the end of the play and his life becomes meaningless. Critic, Plato proposed that ‘nothing’ is another word to describe chaos [3].

This illustrates the destruction his kingdom is to be plunged into, suggesting the inevitability of tragic events. Arguably Act 3 provides readers with a better indication of the tragic events that are to follow. The storm in Act 3 symbolises Lear’s madness and confusion: it seems to represent a physical, natural reflection of Lear’s state of mind. At the same time, the storm embodies the power of nature, which forces the powerless king to recognize his own mortality, developing a sense of humility within Lear for the first time.

In Act 5 scene 3 Edgar say’s, to his dying brother; The gods are just, and of our pleasant vices Make instruments to praise us: The dark and vicious place where thee he got Cost him his eyes. The Elizabethans used various punishments for adultery, but blinding was not one of them. However, historically Locrensian’s from Rome were thought to have used blinding as a punishment for adultery. On this level Gloucester’s blinding seems an appropriate punishment for a Shakespearean audience. His blinding symbolises his and Lear’s incapability to see the truth.

Stanley Cavell, in his essay ‘The avoidance of Love: A reading of King Lear’, suggests that Gloucester’s inability to recognise Edmund drives him to his tragic downfall, just as Lear’s inability to recognise Cordelier drives him to his fall. The audience is able to see how Lear’s downfall affects his people through Gloucester’s fall; this reflects the idea of Shakespearean tragedy and how the fall of a king reflects on his people. Gonerill and Regan are shown to be plotting against Lear at the end of act 1 scene 1, this suggests that tragic events are to follow.

The sisters also emphasize Lear’s bad judgement as well as his old age, suggesting his tragic flaw. A feminist criticism of ‘King Lear’ suggests that Shakespeare implies tragedy is inevitable, when power is in the hands of women. In Shakespearean time women had little say and power, this implies that Gonerill and Regan are incapable of coping with and handling authority therefore by handing over his Kingdome to his daughters, Lear ultimately advances his tragic downfall causing the inevitability of tragic events. Gonerill and Regan abuse their power, but so does Edmund who is a male antagonist.

This indicates, that perhaps Shakespeare isn’t implying that women cannot cope with power, but that when authority is handed to those, that God doesn’t wish it to be handed to, chaos and destruction is created. This further expresses the fact that king ship is granted by God. Some readers argue that the absence of a mother is what leads to the inevitability of tragic events. It is necessary for a mother figure in the play to ensure that Lear doesn’t become an ‘abusive patriarch’ [2], as well as preventing Gonerill’s, Regan’s and Edmund’s character from deteriorating.

In conclusion to my essay it is important for the seeds of tragedy to be sewn in act 1 scene 1, as this provides the audience with a sense of the inevitability of tragic events keeping them engaged with the play. Further more, by foreshadowing tragic events in the opening, the play takes into account the perception of a good tragedy made by Aristotle. However, it could be argued that the seeds of tragedy in the opening are not necessary as this makes a tragic ending more unexpected and therefore the modern day reader may find this more exiting.

King Lear: The seeds of tragedy are sewn in Act 1 scene 1. (2020, Jun 02). Retrieved from https://studymoose.com/king-lear-seeds-tragedy-sewn-act-1-scene-1-new-essay 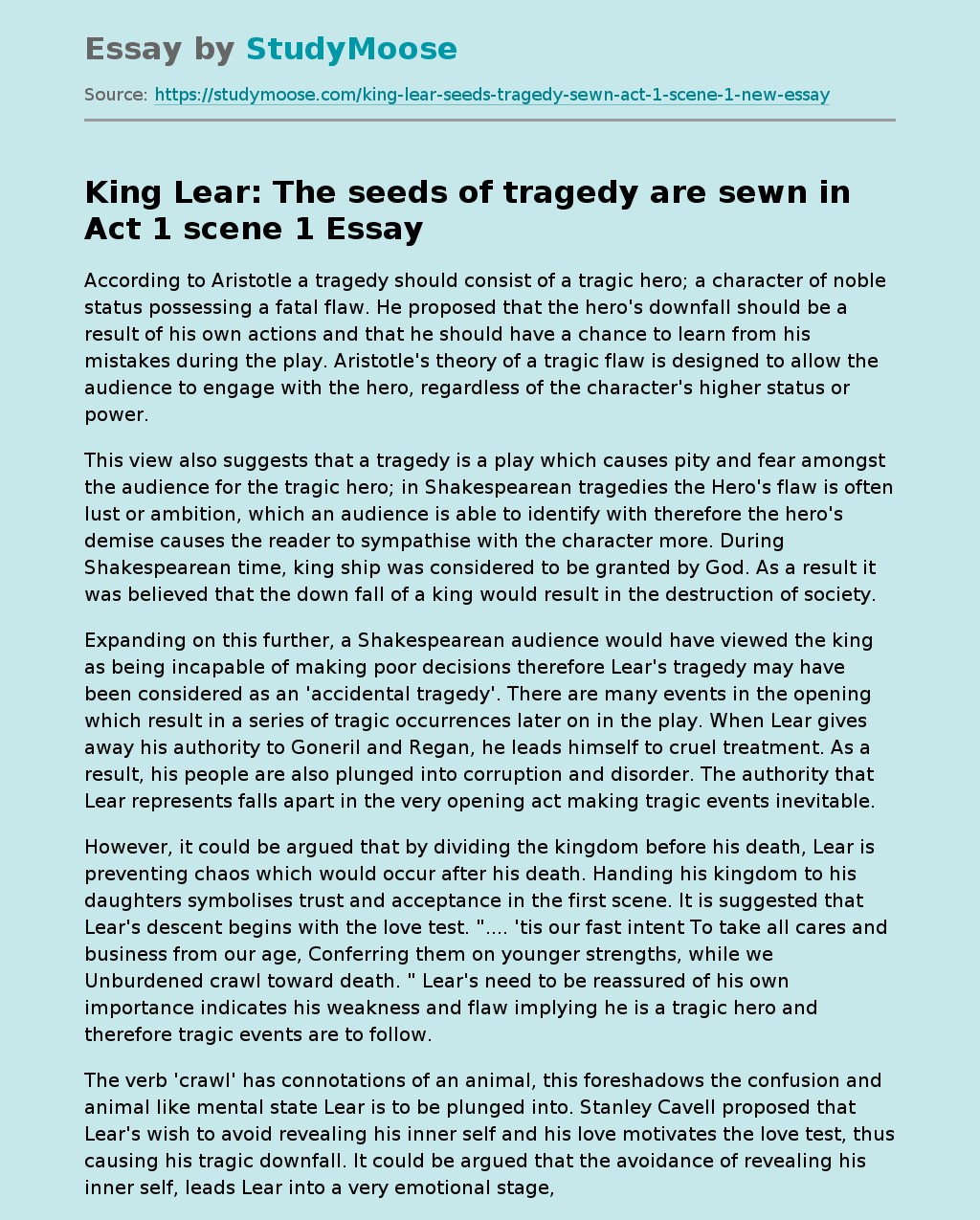