Romeo and Juliet: Dramatic Irony Use

Romeo and Juliet has always been known as one of Shakespeare’s most popular and tragic love story plays. It is known for its dramatic ending love scene and tale of twisted fate. This essay is based upon the pathos of the last scene of Romeo and Juliet. Pathos is a quality that arouses emotions such as pity, sympathy or despair. This is therefore why the essay is based upon the last scene as it is the most tragic and dramatic scene in the play which successfully arouses sympathy in the reader due to the tragic atmosphere created by Shakespeare.

Don't use plagiarized sources. Get your custom essay on
“ Romeo and Juliet: Dramatic Irony Use ”
Get custom paper
NEW! smart matching with writer

The atmosphere is created in Act 5 by Shakespeare’s gift of writing that effectively arouses emotions and passions in the reader. For example, Romeo’s death was unnecessary as Juliet was merely sleeping which Romeo was unaware of.

Shakespeare increases the feeling of pathos in the audience by the dramatic use of irony – as the audience know that Juliet is alive – therefore there is an alternative ending possible – however Romeo is convinced of her death and with a broken heart takes his own life – leaving the audience feeling a sense of despair at this unnecessary tragedy.

Another example of dramatic irony is shown in the quote: “thou art not conquer’d beauty’s ensign yet Is crimson in thy lips and in thy cheeks, And death’s pale flag is not advanced there.. ”

Here Romeo is distraught that she is dead and is saying she’s looking beautiful, how can she be dead.

Of course she isn’t dead, merely sleeping, and the audience painfully know this. This then increases the feeling of pathos with the use of dramatic irony. ‘O my love, my wife, Death, that hath suck’d the honey of thy breath.. ‘ the language used in this section is beautiful and very dramatic, the deep, in depth language has a great affect on the atmosphere, and the feeling and emotions in the audience.

Written plays, unlike most novels perhaps, are composed in the present tense which engages the reader as they know directly what is going on in the character’s head, rather than being presented historically in the past tense, which has a less dramatic effect on the reader. It is more gripping when written in the present tense as the story unfolds directly before the reader. “Here’s to my love! (drinks) oh true apothecary ! thy drugs are quick then thus with a kiss I die” – this quote from Act 5, Scene 3 is when Romeo drinks the poison and is an example of Shakespeare’s dramatic language.

The pathos and atmosphere builds up as Juliet awakes “I do remember well where I should be; and where is my Romeo? ” as she rises to find Romeo’s body. This scene is very tragic as fate has struck in such a terrible way. This is mostly due to the heavy, strong tragic language used, it has a dramatic affect on the scene. ‘O churl, drunk all, and left no friendly drop To help me after? I will kiss thy lips.. ‘ as you can notice from the quote, the language used is so deep and poetic, especially at this dramatic stage in the play.

It is so affective as the audience sympathise with the characters, because the language succeeds in involving them with the plot. The build up to the ending scene has a great affect on the pathos, as the letter does not get to Romeo, and there is a worried, anxious atmosphere in the audience- as nobody knows what shall become of Romeo, and if Friar Lawrence will get to Romeo in time to tell him. There is a great build up which grows through the play, and by the ending scene there is a great anxious atmosphere, which has gradually built up through the play.

The above scene and setting (in a tomb) creates a sombre mood and makes the reader empathise with the language more effectively (again increasing the whole pathos and feeling to the scene). The scene is taking place in a gloomy tomb with sleeping bodies, including Juliet who is looking peaceful in her sleep, the setting is therefore dark and gloomy and even more tragic. Shakespeare has therefore created a very tragic and saddening mood by choosing that setting for the most dramatic scene. ‘I am almost afraid to stand alone Here in the churchyard, yet I will adventure’.

The setting is therefore creating an atmosphere as well as the language-which arouses people’s emotions even more and helps contribute to the pathos. To conclude, what contributes towards the pathos of Shakespeare’s play is the atmosphere he creates through language, characters, scene, setting and ironic situations through his clever development of the storyline, the other characters also contribute, as it seems as though they are all against Romeo and Juliet- apart from Friar Lawrence and Juliet’s nurse.

Friar Lawrence’s good intentions precipitate the tragedy- although it wasn’t his fault and he was only trying to help the difficult situation. As for Old Capulet and Lady Capulet who do make the situation worse-and could in fact be blamed for the tragedy, this is something the audience think about after the play, which characters could be blamed for the tragedy, this therefore does affect the pathos in a great way. The language, setting, characters and build up all come together at the end to create a great atmosphere and pathos.

Romeo and Juliet: Dramatic Irony Use. (2017, Aug 30). Retrieved from https://studymoose.com/romeo-and-juliet-dramatic-irony-use-essay 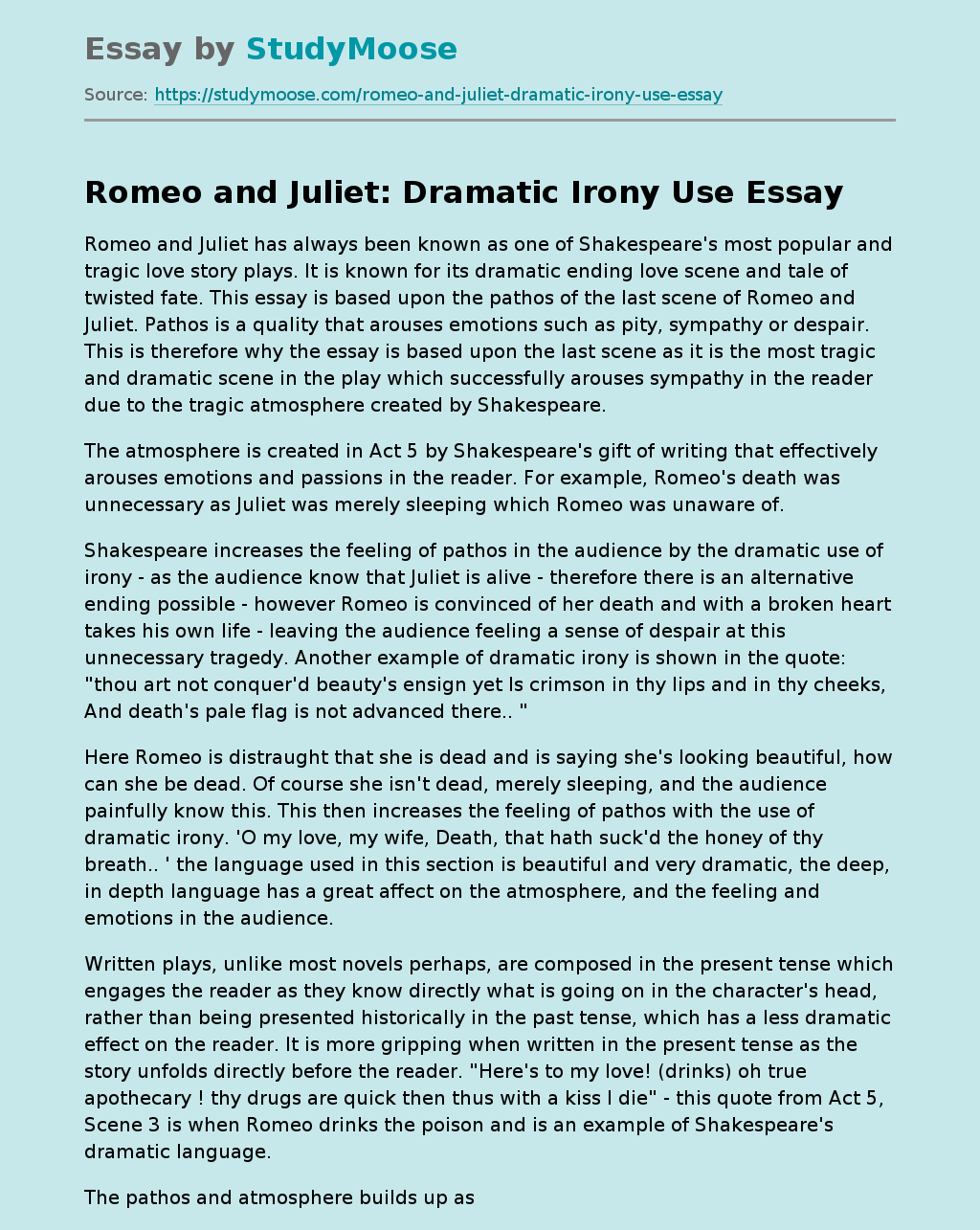