How does Shakespeare use language and dramatic effects to in Act 1, Scene 1 and Act 3, Scene 1 of Montague family. Later in Act One Scene Five he authenticates that all that is ever on his mind is war as when he sees Romeo at the Capulet party (Romeo being a Montague and therefore not wanted), instead of letting it pass as a party in Elizabethan times and today is no place for fighting, he asks Capulet for permission to fight him there and then – “Uncle, this is a Montague, our foe; a villain, that is hither come in spite to scorn at our solemnity this night.

Don't use plagiarized sources. Get your custom essay on
“ Dramatic effects to in Act 1, Scene 1 and Act 3, Scene 1 of “Romeo and Juliet” ”
Get custom paper
NEW! smart matching with writer

This quote demonstrates Tybalt’s willingness to vehemently insult others and the “s” sounds he uses suggests he is almost hissing his hatred. Throughout the play Tybalt is extremely one-dimensional when it comes to language; when he speaks it as always at a dramatic or leading up to a dramatic point in the play. Maybe due to the similar circumstances that he speaks in or the fact that he is a warrior and no poet he repeatedly speaks in blank verse (or prose)

Romeo is an archetypal lover, who despite his good intentions is still forced into fighting.

He is the one male character in the entire to play that is willing to forsake his family name for love; this portrays him as an outsider to typical Veronian behaviour. This is strongly proclaimed by Shakespeare in Act One Scene One after a brawl between the two families in the streets – “What fray was here? Yet tell me not for I have heard it all!”-Demonstrating Romeo’s mood as someone who is detached from the fighting as he dares to be.

Although Shakespeare substantially promotes non-belligerence throughout the play using the character Benvolio, he does not agree with the way Romeo attempts to break up the fight between Tybalt and Mercutio (“I thought all for the best”) – perhaps he is conveying to us that interference is bad. This is well shown in the Franco Zeffirelli (1968) film of “Romeo and Juliet” as the fight is made out to be gentlemanly and playful, it is shown to be Romeo’s fault Mercutio dies.

Romeo’s extensive language adds to the atmosphere of the play and gave the highly trained ear of an Elizabethan play watcher an insight into what was going to happen. Whilst Romeo is not in a scene that is displaying any particular passion for love or war he speaks in blank verse, whilst when he is with Juliet he switches to sonnet (or rhyming verse) form – this was considered very romantic in this period of history, finally when Romeo challenges Tybalt he seeps into more colloquial, cruel pros to demonstrate his anger.

What is most noticeable about the language Romeo uses is actually that it seems always to be tainted, this is due to the constraint oxymorons he uses – “Feather of lead, bright smoke, cold fire, sick health.” This bolsters the contrast Shakespeare creates, the way that the play is constantly switching between violent or death or love scenes. The character of Romeo is all about contrast – one second he is the loving husband of Juliet, the other he is the bloodthirsty killer of Tybalt. From the beginning to the end of the play, Shakespeare exploits this contrast. In the prologue, the audience is told that the “lovers take their life”. Love is tainted with death. At the end, by using Romeo and Juliet as a sacrifice, ending the ancient grudge, we continue to experience mixed emotions because of this contrast. Although death claims two innocent lives, love is ultimately triumphant.

Tybalt’s opposite is Benvolio. Unlike Tybalt, war is the last thing he thinks about, instead he feels that there is much more to life than fighting and in reconciliation of this he will always try to break up fights, this is shown in the Act One Scene One when he attempts to break up the fight that Sampson and Gregory have created by shouting “Part, fools! Put up your swords; you know not what you do.” Benvolio’s underlying judiciousness is shown by the use of the word “fools”; proving that he considers Samson and Gregory to be imbeciles for fighting. Not only does Benvolio try to break up fights, he also is willing to give council to his friends – the particular case shown in the play is when he confides with Romeo about Rosalin – “What sadness lengthens Romeo’s hours?” Shakespeare uses him as a dramatic device, for example he always truthfully reports fights, does not get killed and has an active participation so could possibly be viewed as a role model.

Also, interestingly enough in Act Three Scene One he does not get involved in the fighting even when Mercutio is killed; this is another of Shakespeare’s more pacifistic of opinions saying that you should not even fight if it is to bring someone to justice. Amid the highs and lows of the play Benvolio only employs two different styles of language, he uses prose or blank verse when he is speaking in a time of peace e.g. when counselling Romeo, and merges into a rhymed verse when his adrenalin is at is peak – like when he is breaking up a fight. The rhymed verse shows his high principles and how he understands the responsibilities of being a noble.

Although Tybalt, Romeo and Benvolio are undoubtedly the dominant male characters, males such as Mercutio, Sampson and Gregory succeed in making

important points concerning the main theme of the play, masculinity. Sampson and Gregory spearhead the first scene with a crude, slanderous conversation that ultimately leads to a brawl in the tight streets of Verona. Shakespeare moulds them into a tool for expressing loutish – therefore not truly manly behaviour. They also play an important part in starting the fight, which captures the audiences’ attention in the beginning of the play. These louts are more interested in showing off to each other than helping to maintain a stable society, they do this by making bold comments concerning sex and fighting – it makes their already oversized ego swell with feelings of machismo.

The language they use reinforces this behaviour – “I will push Montague’s men from the wall and thrust his maids to the wall.” The verbs “push” and “thrust” are very violent adding to Gregory’s and Sampson’s characters. Overall Sampson and Gregory set the initial tone of the play, they show the audience the relevance to masculinity in it, that the play will have a varied temperament and to expect wordplay – especially with characters such as Mercutio to come.

Concerning wordplay, Mercutio uses it extensively; even when he is on the brink of death he jokes – “Ask for me tomorrow, and you shall find me a grave man.” Mercutio does this to conserve his manliness; in modern day terms it is comparable to a rugby player being injured seriously and asking to continue playing. However, after his witty fusillade of comic comments it is revealed to his friend that he is in fact in terrible pain as in his last breaths he shouts out “A plague a ‘both your houses,” He repeats this three times for added effect. This curse was one of incredible seriousness at the time, as in the 16th century England had been devastated by plagues several times. With this, Mercutio the joker ends his life on a malicious tone; this reinforces the idea that the feud is to blame for his death.

Shakespeare creates the play’s atmosphere using several dramatic effects, a very important one is the terminology used for swords especially during the first seen. Sampson and Gregory refer to their weapons with sexual connotations, for example the terms “fiddling stick” and “naked weapon” are both used, these props swell the testosterone filled nature of the young duelling males. This effect is essential as in the 16th century a swordsman of Tybalt’s calibre was admired; this is demonstrated when the placid Benvolio describes Tybalt as “stout”.

Shakespeare makes a key point concerning masculinity in Act Three Scene One when the prince denounces Romeo’s masculine, but not law-abiding action when he kills Tybalt to avenge Mercutio in order to protect the citizens of Verona. Shakespeare makes the prince do this to express that people should do what is in the community’s interests rather than allowing deaths to slip past their gaze. The prince puts down this manly action by exiling Romeo thus pleasing both houses and keeping peace – “Romeo slew him; he slew Tybalt, and for that offence we do exile him hence.” This corresponds directly towards Elizabethan England as due to numerous noble duels, many high up people were getting killed so duals began to be clamped down on more thoroughly.

Yet another way in which Shakespeare adds to the feel of tension in the play -as well as giving the audience an additional awareness of the social context is by the setting. Shakespeare sets the play in the swelteringly hot and extraordinarily cramped

city of Verona; this style of city was typical of the Elizabethan period adding to the play a more realistic feel. A good example of this being shown is when Romeo asks the way to the house of Capulet and the servant replies “up.” – this is an obvious referral to the architectural style of the Elizabethan period. In addition the combination of heat and little space may have irritated the characters – adding to their aggression. Later on in act three Benvolio sums this up by saying “The day is hot, the capels are aboard, And if we meet we shall not escape a brawl, For now, these hot days, is the mad blood stirring.”

Shakespeare creates a testosterone driven world that reflects the aggressive and competitive attitudes of males in Renaissance Europe. The contrasting characters suggest different male attributes; some being kind and trustworthy, whilst others are nasty and cruel. This explosive structure creates tension; at any moment passion and anger could erupt – throwing society into disarray. Perhaps Shakespeare s suggesting men need to control their desire to fight and should be open, friendly and compassionate. 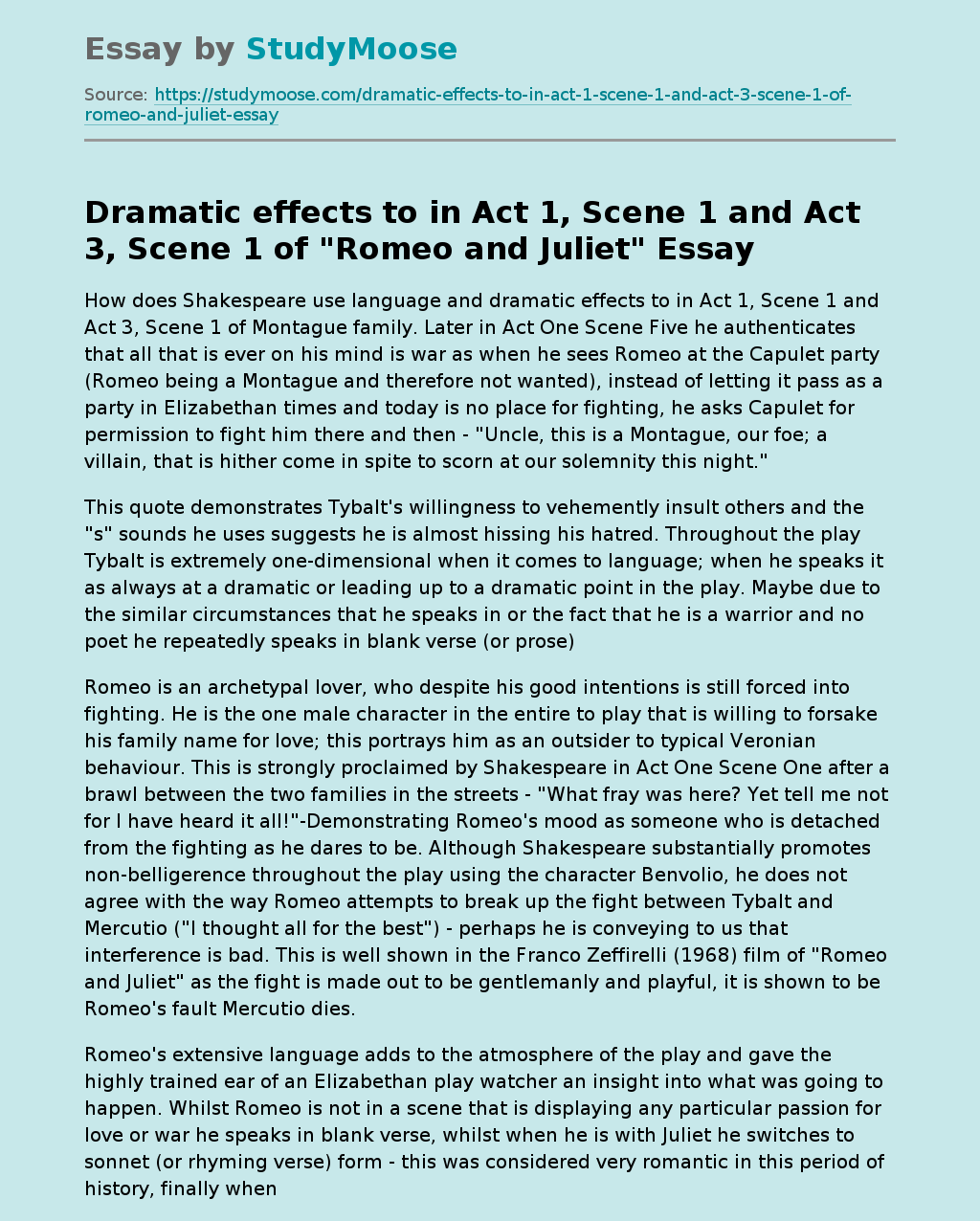