Romeo and Juliet: Explore the dramatic impact of act 3 scene 1

In the Elizabethan times there was a divide between the rich and the poor. The poor fitted into three categories ‘deserving poor’ Deserving unemployed’ And undeserving poor’ – those who turned to a life of crime or who had become beggars.

However there were no categories for the rich although access to banquets, feasts, festivals and fairs was limited, based upon which social class you live under.

Also, in the Elizabethan times the rules for men and women were different. Only men were allowed to work making them the dominance of the household however, in some families women could work, reasons being: if their family was extremely poor or for some reason the man was incapable of working.

Don't use plagiarized sources. Get your custom essay on
“ Romeo and Juliet: Explore the dramatic impact of act 3 scene 1 ”
Get custom paper
NEW! smart matching with writer

Getting married in those days was a completely different story compared to nowadays too. The parents, whose choice was usually based on how much the wife or groom to be’s family had in their purses rather than looks, age or personality, chose your bride or your groom.

Also the age limit to wed would seem perverted compared to nowadays standards being set at just fourteen years old.

Entertainment was never amiss in those days as there was always a tournament or some kind of sport going on in the area be it bear and bull baiting or hunting.

Plays, fairs, festivals, banquets and feasts were a regular occurrence but access was limited based upon which social class you lived under.

Theatre was different as well even the rules, one of the most shocking of the rules was that women were not allowed to act, meaning that the men had to act as the women which now would seem very strange indeed.

Theatre was the common form of entertainment as most of the population couldn’t read. Similar to nowadays the seats varied in price the cheapest of which were in ‘the gods’. (Seats really far from the stage). The deserving poor and unemployed would be able to save up enough to buy a seat here. Read why should festivals and fairs be banned

In those days, life would have been hard for anyone. Well mainly just for the women, with being subservient to men and all. Which leads me on to what this essay is all about. The Elizabethan times housed many great dramatists, poets, playwrights and many other leading literary artists. William Shakespeare was one of them he wrote many plays one of them was Romeo and Juliet the focus of this essay.

During the play ‘Romeo and Juliet’ the drama and tension ripples to high and low throughout. However, during ‘Act 3 Scene 1’ both drama and tension shoot up as the most eventful scene unfolds with the dramatic deaths of two main characters and the banishment of another. Therefore. I will be basing this essay upon this scene.

Before ‘Act 3 Scene 1’ Romeo and Juliet secretly get married along with the help of friar Lawrence. Getting married in secret was unheard of in those days and particularly a marriage of two lovers whose families both hold a bitter grudge against each other.

At the beginning of ‘Act 3 Scene 1’ Benvolio and Mercutio are standing in the street together when he spots Tybalt – Juliet’s cousin – and his cronies approaching. Benvolio notices something different in the way Mercutio is acting and feels that he and Mercutio should go home, as he fears a fight may break out. Never the less Mercutio declines and as Tybalt gets closer he begins to provoke him. (Reference to the play). Mercutio continues to provoke Tybalt to encourage him to fight:

“Here’s my fiddlestick that shall make you dance.” In my opinion this shows that Mercutio is more than ready for a fight and he knows that this sort of insult will probably get Tybalt to fight him.

Then Romeo turns up and as Tybalt was looking to pick a fight with him rather than Mercutio starts throwing insults a Romeo.

I think this shows that Tybalt is determined to get what he wants and he isn’t going to let a hostile Mercutio stand in his way.

Mercutio still persists in provoking Tybalt to fight and eventually it pays off when Tybalt begins to retaliate and eventually draws his sword and starts to fight Tybalt.

Mercutio: ” Tybalt you ratcatcher. Will you walk?”

Tybalt: “what wouldst thou have with me?”

Mercutio: “good king of cats, nothing but one of your nine lives.”

This shows that Mercutio wasn’t going to stop until he got what he wanted and Tybalt realised this so he just gave in.

Benvolio: “what art thou hurt?”

Mercutio realizes that he will probably die and wishes dad luck on everyone.

“Help me into some house Benvolio or I shall faint… a plague a’ both your houses, they have made worms meat of me. I have it, a soundly too. Your houses!”

This is the most dramatic part of ‘Act 3 Scene 1’ and by wishing bad luck on their houses and everyone and thing affiliated to them is a if he’s trying to tell them if it wasn’t for the rivalry this wouldn’t have happened.

“O Romeo, o Romeo, brave Mercutio is dead, the gallant spirit hath aspir’d the clouds, which too untimely here did scorn the earth.”

This is a very dramatic scene Romeo’s best friend has been killed and he know who is to blame.

Romeo hurries to catch up with Tybalt and starts another fight this time it is Tybalt who pays the consequence – being his life – Romeo flees the city and then both families are informed of the revelations and both families as well as witnesses gather outside the palace and both families point the blame on each other in which they find out from witnesses that indeed Tybalt was responsible for the death of Mercutio and Romeo was responsible for the death of Tybalt. In receiving the news that Romeo had fled the city the prince sentences Romeo to banishment under punishment of death.

After this scene Juliet approaches friar Lawrence and is given a bottle of poison and a potion, which if ingested will immediately cause one to fall into a deep sleep and appear dead for long enough for her family to hold a funeral and place her lifeless body in the family tomb and once Romeo had received word of this cunning plan they will be reunited and able to flee the city and live the lives together elsewhere.

Juliet’s family find her corpse on her bed and hold a funeral. Meanwhile friar Lawrence sends a messenger to find Romeo and inform him of this plan but before the messenger sets out on his search Romeo returns to the city and takes a stealthy refuge in Benvolio’s hut. Benvolio, oblivious to the plan, gives Romeo the heartbreaking news and soon after Romeo leaves the hut and enters the Capulet burial tomb. He then proceeds to where Juliet’s sleeping corpse lay and says exactly what his heart tells him to and describes the love he wished to give to her hapless heart and eventually takes the real poison from Juliet’s pocket and drinks the whole bottle so that they shall be reunited in heaven.

A little while after, Juliet awakes from her eternal sleep and finds Romeo’s dead body by her side. She then proceeds to describe her love for Romeo in full, and then takes Romeo’s sword from his resting corpse and thrusts it into herself.

Friar Lawrence enters the Capulet tomb to find both bodies lying on the dusty floor and the next morning announces the tragedy and tells everyone about the secret marriage outside the palace where both families overhear once again an argument breaks out and once again the prince is summoned and gives a speech.

Later, both families agree that if one member of their family set aside their differences then the whole family could too and call a truce and recognise the love Romeo and Juliet shared and allow the bodies to be place side by side in the tomb and mourn the death of all of the victims of their rivalry.

So the Elizabethan times were hard on everyone and holding grudges only made life harder and I feel the moral of this story is not that love will always win by bringing both involved together and let them forget the differences between them but that in the end love will bring everyone together and allow everyone to set their differences aside to celebrate the love of others.I believe the play left people not sad because of the tragedies involved but overjoyed that the death of two lovers let two feuding families unite and and forget any debts that each family feels they are owed by the other 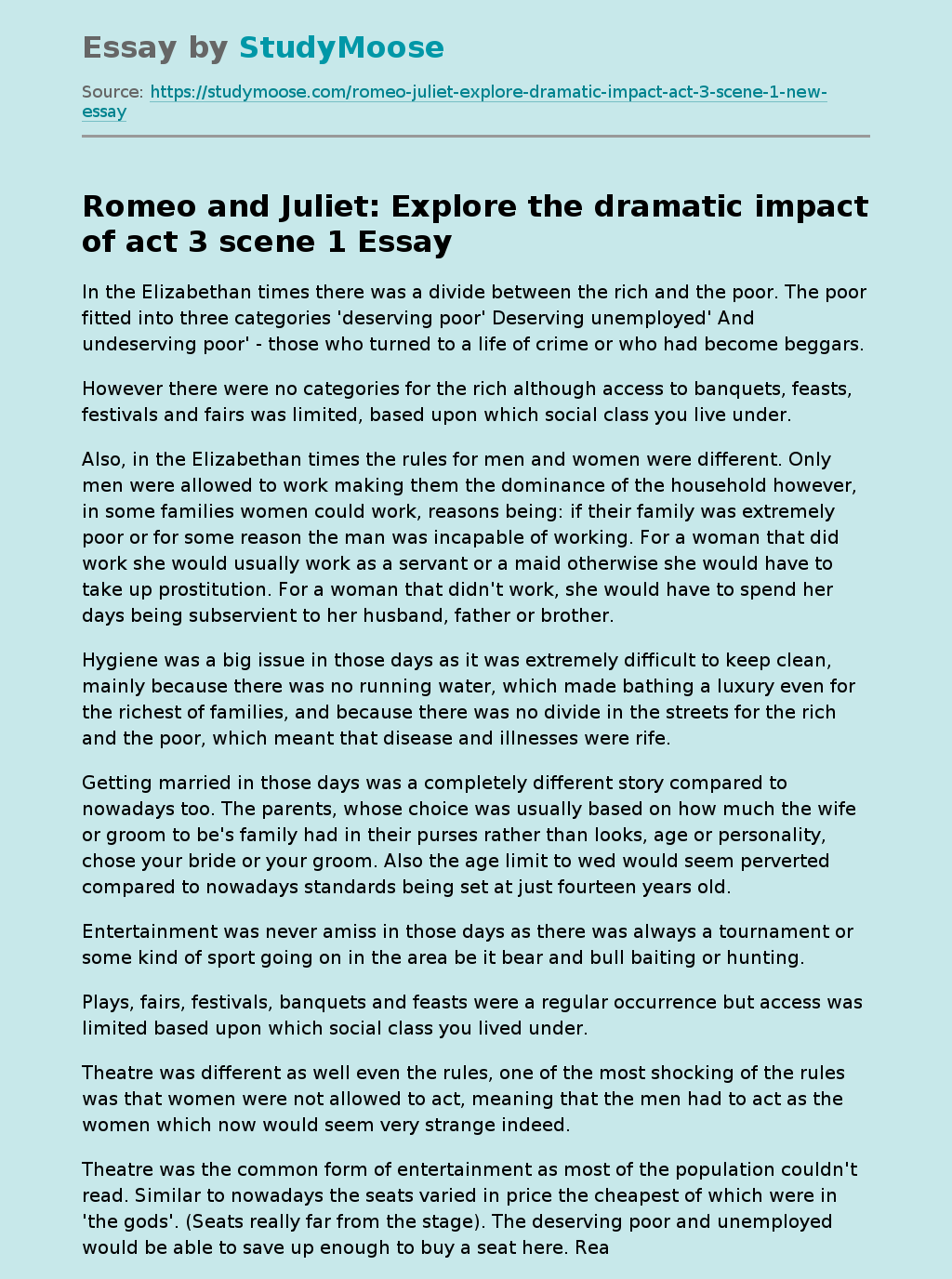