How does Shakespeare use language and action to make Act 3 Scene 1 of his play 'Romeo and Juliet' dramatically effective?

Act 3 Scene 1 is a key scene in ‘Romeo and Juliet’, and the events it contains change the course of the play. We understand already that the effect of a public fight would be devastating for Romeo’s and Juliet’s romance, thanks to the Prince’s warning near the start of the play. Although we hope that everything will be alright for the couple, Shakespeare gave us hindsight in the prologue, telling us something will go badly wrong. As the scene immediately follows the wedding, we fear that it will be a solemn reminder that their romance is destined for tragedy.

Don't use plagiarized sources. Get your custom essay on
“ How does Shakespeare use language and action to make Act 3 Scene 1 of his play ‘Romeo and Juliet’ dramatically effective? ”
Get custom paper
NEW! smart matching with writer

In terms of social and historical context, the play was written at the same time as one of the biggest scandals of Shakespeare’s time: The three way swordfight on Hog Lane 1958. I

t involved one of Shakespeare’s biggest rivals, Christopher Marlowe, and two other men, Watson and Bradley. Bradley was killed and Marlowe was jailed, but Watson got away without charge, as he had many friends in high places.

This was thought to have influenced Shakespeare’s “Romeo and Juliet”, in the fight between Tybalt, Romeo and Mercutio and as it was a massive scandal, the majority of the audience would have known about it, making the scene dramatically effective.

The term “dramatically effective” refers to how the audience is affected by the drama, through both language and action. In order to get a full understanding of the dramatic effect of this scene, we must first appreciate the different audiences to whom this play is being performed.

A 17th century audience, who would be watching this play in Shakespeare’s time, would be very interested in the choice of language, and would go to hear a play as opposed to see it. They would be entertained and amused by clever attention to linguistic detail, and would notice changes between verse and prose, whereas a modern audience might not. From a modern perspective, a dramatically effective play would be more orientated around the actions the actors do than the words they say. As this scene is filled with clever language and action, it is dramatically effective from both perspectives.

In the scenes leading up to Act 3 Scene 1, we had the chance to understand each character, and so we already have our own ideas of how the characters in the scene will react, which heightens the dramatic effect. We learn that Romeo is often lead by emotion and love, can be quite naï¿½ve, and is very sensitive. We know that he would not fight for the sake of fighting, and with his marriage to Juliet in the previous scene, we are sure he would never fight a Capulet because they are a Capulet. His cousin Benvolio is a calm, level-headed man, who we come to realise is very reliable. He does his best to keep the peace, and the audience treat him as an emotional barometer, an indication of the atmosphere of the characters emotions. Mercutio is impetuous and incredibly flamboyant.

The audience, especially a 17th century audience, would have picked up his tendency to speak in prose, and his clever word-plays, and would find him an entertaining and interesting character. We learn that he likes to showcase his linguistic flare from his “Queen Mab” speech in Act 1 Scene 4, where a lot of the time he is talking about something completely irrelevant, going off at a tangent to show the audience that he is clever and funny. Tybalt is a very fiery, short tempered Capulet, who is heavily involved in the family feud and hates all Montagues. He is extremely proud, and very volatile, as we learn when he spots Romeo and some other Montagues at the Capulet party. He is offended and enraged at such a simple offence and we know that his hatred can only be bad for Romeo and Juliet. As their wedding has just taken place, Shakespeare juxtaposes this scene of violence against the peace of the tranquil wedding scene. This greatly increases the impact of the shocking events that take place in the scene.

At the very start of Act 3 Scene 1, Shakespeare breaks a lot of dramatic conventions. He sets the scene with tension in the air. This did not conform to the standard build of tension that playwrights tended towards then. As a 17th century audience would go to the theatre on a regular basis, this would have seemed abnormal and interesting. The tension clashes with the mood of the previous scene, and as the audience are expecting a smooth gradient in the tension change; this high tension excites the audience, drawing them in to add to the drama. Because the audience has come to think of Benvolio as an emotional barometer, when he expressed his concern, we instantly trust his judgement, and the tension is raised:

“The day is hot, the Capels are abroad

And, if we meet, we shall not ‘scape a brawl”

Here, Benvolio’s concerns seem greater as Shakespeare uses the rule of three to multiply the dread. He states that it is hot, and by this he means both temperature wise, but also the connotations of heat are those of anger and irrational behaviour. This point is built upon by saying that the Capulets are also out, and will also be suffering from the same heat, and then he finally exacerbates this by reminding the audience that a fight can only end badly, as the prince said in Act 1 Scene 1, raising the tension and hence the dramatic effect of the scene greatly/

“For now, these hot days, is the mad blood stirring”

This line is very effective in raising the drama, as it has many clever connotations that a Shakespearean audience would have picked up on. Again, Shakespeare uses the theme of heat referring to anger as well as high temperature. He uses the phrase “the mad blood stirring”, which in this context means many different things; it refers to the idea of the blood boiling, due to anger and the heat; it refers to the blood war between the two families, it conjures up the theme of trouble brewing, as if some divine power is stirring up their blood, cooking up trouble to cause a fight. All these implications of that phrase build a very powerful tension-raising sentence, making the scene dramatically effective.

Shakespeare uses prose and verse well to increase the dramatic effect in Act 3 Scene 1. Benvolio talks in verse for almost the entire scene, expressing his concerns and demonstrating the seriousness of the situation so the audience too know where they should stand. Mercutio however talks in prose throughout the play, regardless of the mood of any other characters. This is to show his reluctance to conform to the social norm, to demonstrate his frivolous and playful mood and ultimately he talks in prose to show he is relaxed and not bothered by any of the events going on around him. As he talks with Benvolio before Tybalt’s entrance, Benvolio relaxes a little and switches to prose also. A 17th Century audience would have noticed this immediately, and would have found this subtle yet clever change in the characters mood very entertaining. When Tybalt enters, Benvolio switches straight back to verse, out of respect and seriousness. While a Shakespearean audience would have noticed this, making it dramatically effective, a modern audience would rely on a change in the actors’ tone of voice to tell them how relaxed or tense they are.

Shakespeare has Mercutio using a lot of clever word-play in his speech, and has Benvolio reacting in a playful manner to this. This calms the audiences mood, as the scene that is set is a friendly one. On stage, the actors would be moving around a lot, to convey to the audience the frivolity and playfulness of their characters, further relaxing the audience and lulling them into a sense of calm. This mood is completely shattered, and the tension rockets as soon as Tybalt enters the stage. Benvolio knows Tybalt can be extremely reckless, and so is instantly fearful and wary of the situation. As the audience look to Benvolio as an emotional barometer, we know the tension has risen immeasurably and that this cannot end well. Mercutio however, does not seem in the least bit concerned by Tybalt’s entry, and this contrast of reactions clashes, making the scene dramatically effective

How does Shakespeare use language and action to make Act 3 Scene 1 of his play 'Romeo and Juliet' dramatically effective?. (2020, Jun 02). Retrieved from https://studymoose.com/shakespeare-use-language-action-make-act-3-scene-1-play-romeo-juliet-dramatically-effective-new-essay 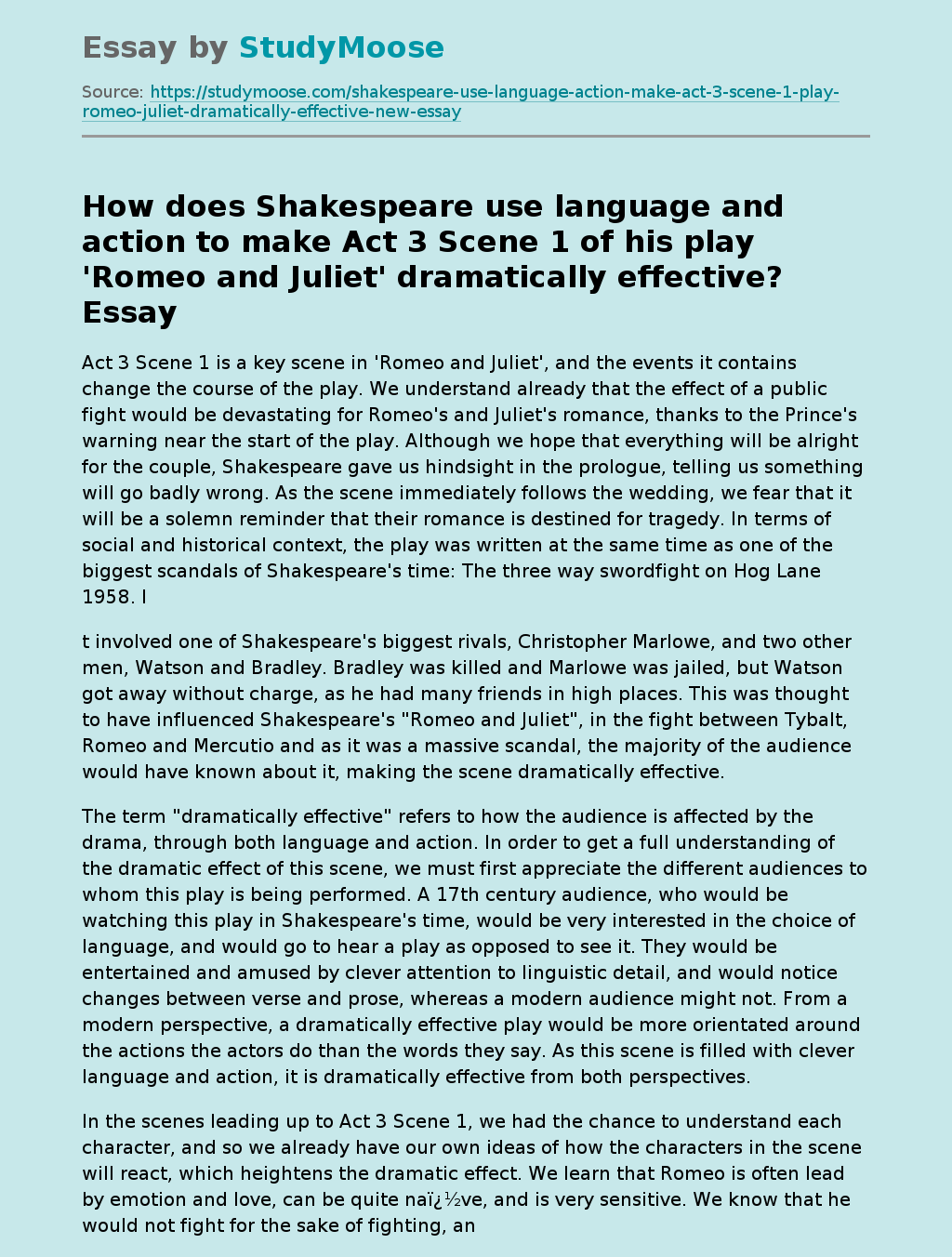