Examine how Shakespeare makes the audience feel in Act 3, Scene 5 of "Romeo and Juliet"

Shakespeare’s Romeo and Juliet is arguably the most famous play ever written. Many remakes have been made, but it was Shakespeare’s talent to capture the audiences imagination that has made it world renowned. The act that I am studying is highly charged emotionally. Shakespeare specifically writes lines to target the audience’s emotions and feelings to get his point across. Romeo has been banished from Verona for killing Tybalt, Juliet’s cousin and spends one final night with Juliet.

Don't use plagiarized sources. Get your custom essay on
“ Examine how Shakespeare makes the audience feel in Act 3, Scene 5 of “Romeo and Juliet” ”
Get custom paper
NEW! smart matching with writer

Juliet has been told in no certain terms she is to marry Paris, a kinsmen of the Prince of Verona. This act is the start of the tragic events that lead to the ultimate tragedy – the deaths of Romeo and Juliet.

Shakespeare’s exploitation of the rich and beautiful language gives figurative, poetic, and dramatic effect. Shakespeare is often called the master of puns and uses them frequently in Act 3 Scene 5. Juliet is saying that she wishes Romeo was dead, but the true meaning of her words are just below the surface:

“Indeed, I never shall be satisfied

With Romeo, till I behold him-dead-

Is my poor heart so for a kinsman vex’d”

It seems as if Juliet wishes that Romeo was dead, she is actually saying she will never be satisfied until she beholds him and her heart is dead.

If understood properly this would probably make the audience feel saddened by the fact that Romeo says her heart is dead after Romeo has just left a few minutes ago, showing the extent of her love for Romeo.

One of Shakespeare’s most frequently used techniques in his language is poetry. Romeo and Juliet is mostly written in blank verse – a type of poetry, for example:

“Wilt thou be gone? It is not yet near day,

It was the nightingale and not the lark”,

While there is no actual rhyming, you can almost hear the poetic beat. The audience would feel great sympathy at this part. Juliet wishes that it was still night and she tries to persuade Romeo to stay. The audience can feel the emotions pouring from the words and would be feeling fearful as they sense the play is coming to an end.

“I would the fool were married to her grave.”

The audience would feel shocked that Juliet’s mother wishes she was dead and, this gives dramatic effect and also adds to the sympathy the audience feel for Juliet

“Evermore weeping for your cousin’s death?”,

Juliet’s mother thinks that Juliet is mourning because of Tybalt’s death. Juliet is crying because of Romeo leaving for Mantua. This would make the audience feel sadness as Juliet is alone and cannot tell anyone about her marriage with Romeo and not even her own mother understands her. There is also a historical point to this line,as you can see Juliet is expected to be over her cousins death already, only a few days after he was killed by Romeo.

Whilst also using beautiful language, Shakespeare frequently uses Imagery throughout the the play, this further enhances the language and gives a stronger feeling to the play. At the beginning of the scene, Romeo and Juliet wake up and are discussing whether they hear the nightingale or the lark:

“It was the lark, the herald of the morn,

The lark represents day and the nightingale represents night. Romeo must leave if it is day as he has been banished from Verona and would be put to death if found in Juliet’s room. As a member of the audience, you would feel great sadness that Romeo is leaving. It also shows the extent of Romeos love for Juliet, He is willing to risk death just to stay with Juliet.

Shakespeare also uses the contrast between light and dark, often in terms of night/day imagery for example when Romeo says:

“More light and light; more dark and dark our woes!”

Romeo is saying that as the morning comes nearer, their problem grows. The contrast between the light and the dark gives strong feeling to this part of the scene, this creates tension and suspense and suggests tragic things are to follow. Most of the good moments with Romeo and Juliet happen in the dark, When light comes they have to part , and would only reunite in the darkness. The audience know it is now time for Romeo to go and this maybe the last time they see each other ‘alive’. As a member of the audience this would make them feel fearful that Romeo’s death is nearing.

Shakespeare also uses imagery in insults for example when Lord Capulet is insulting Juliet after she refuses to marry Paris:

“Out, you green-sickness carrion! out, you baggage!

Lord Capulet insults Juliet by mocking her about her appearance saying she looks as green as something that has been dad for so long, he also says that she is a burden on him. This would make the audience feel shocked and also frightened for Juliet. Her father has suddenly become rude and violent towards Juliet after she says she does not want to marry Paris.

Another one off Shakespeare’s most frequently used images in Romeo and Juliet is poison for example when Lady Capulet threatens to send someone to Mantua to poison Romeo, the poison signifys death:

Shall give him such an unaccustom’d dram,”

Lady Capulet says that she will send someone to Mantua to poison Romeo. This is quite ironic seeing as how Romeo dies because of poison, though it does not come directly from the hands of Lady Capulet, it is because of her selfishness and the selfishness of others that leads ultimately to the deaths of both Romeo and Juliet. This would make the audience feel extremely worried for Romeo’s life.

One of the most dramatic moments of Act 3 Scene 5 is when Romeo and Juliet have to part. Shakespeare creates great dramatic tension, when Romeo says:

Firstly the audience feels suspense as they fear the play is coming to and end meaning the deaths of both Romeo and Juliet. Secondly they feel great sadness that the two young lovers are to be parted. They also feel fear knowing as they o that they will both soon die. The audiences fear and sympathy for Romeos situation is increased when we think about the social and historical context, for example at that time, Romeo could actually be put to death if found in Juliet’s room. This makes the audience feel increasingly concerned and adds great suspense to the scene.

Another one of Shakespeare’s most dramatic moments that stands out in Act 3, Scene 5 is when Juliet has a premonition of Romeos death.

“Methinks I see thee, now thou art below,

As one dead in the bottom of a tomb”.

The tension significantly increases from this point onwards as the audience feels suspense as they already know Romeo is going to die but not when. This moment brings Romeos death inexplicably closer. The audience also feels great sadness and sympathy for both Romeo and Juliet. This is also an example of dramatic irony as the audience knows about Romeos death due to the prologue.

The audience also feel fear for Juliet when her father is threatening her, the actor playing Juliet’s dad would be very loud and boisterous to get his point across:

“An you be mine, I’ll give you to my friend;

And you be not, hang, beg, starve, die in

Juliet’s father is saying that if she is his daughter, he can give her hand in marriage; if she refuses, she’s not his daughter and he won’t care what happens to her. He says he won’t acknowledge her as his daughter, and he won’t give her any support. Juliet’s father then storms out. This part is very dramatic, the audience feels very sorry for Juliet. Her own father says he doesn’t care if she dies. There is also historical context here; Juliet is her fathers property, to do with as he wishes, ‘ill give you to a friend’. This was quite normal back in Shakespearian times.

Juliet feels further betrayed after her father insults her and her mother tells her that she is no daughter of hers, “Talk not to me, for I’ll not speak a word. / Do as thou wilt, for I have done with thee”. Juliet also feels betrayed by the nurse, this gives significant dramatic effect:

“I think it best you married with the county.”,

The Nurse says that Juliet should marry Paris. This is like the final stab in the heart for Juliet, the Nurse was like a second mother too Juliet and she takes the side of the parents. The audience would feel deeply saddened that Juliet’s last place of comfort is also turning her back towards her.

‘Romeo and Juliet’ is thought to have been written in 1595 or 1596, yet nearly 415 years later it is still relevant to today’s society. Shakespeare’s ideas of true love marriages and other thoughts in his plays are well ahead of his time, perhaps this is why Shakespeare’s plays are still being performed today. The themes of love and marriage in Romeo and Juliet are still universal themes in 2008. Most members of a British audience in 2008 would have a romantic view of love, that marriage should be based on love not family standing or wealth. This would make the audience feel greater sadness for Juliet’s predicament when she is told she is to marry Paris when she is in love with Romeo. Many remakes have been made that maybe more appealing to a modern audience, such as Noughts and Crosses and West Side Story, all the remakes are based on Shakespeare’s version of the play. The theme of teenage suicide is increasingly relevant now, with teenage suicide rates increasing every year, showing Shakespeare was ahead of his time.

Examine how Shakespeare makes the audience feel in Act 3, Scene 5 of "Romeo and Juliet". (2020, Jun 02). Retrieved from https://studymoose.com/examine-shakespeare-makes-audience-feel-act-3-scene-5-romeo-juliet-new-essay 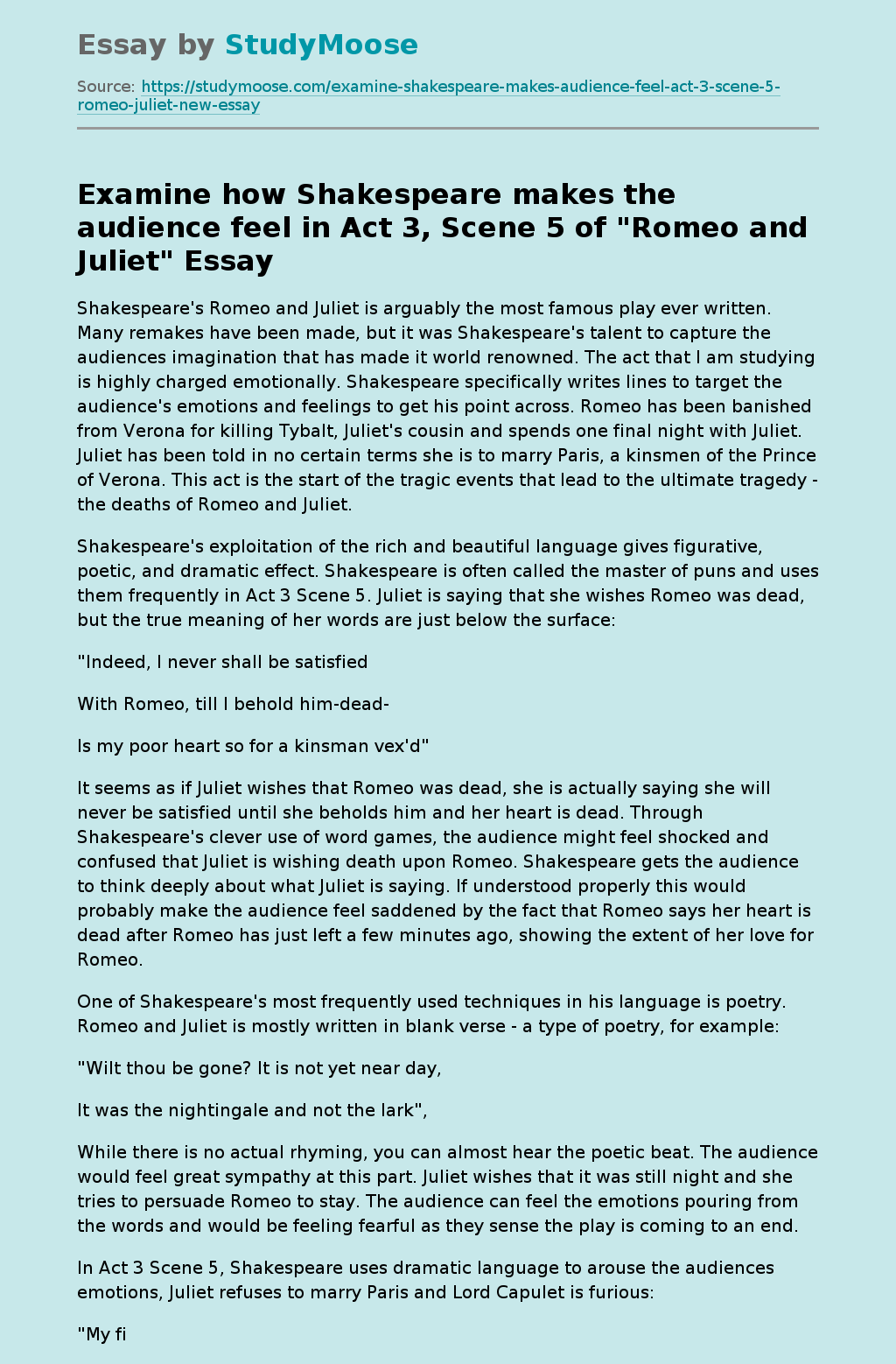