Greek literature was rich in dramas and tragic heroes. The main rules for defining the real tragic hero were summarized and sharply distinguished by Aristotle; he worked out six important characteristics for the true tragic hero: hamartia, hubris, anagnorisis, peripeteia, nemesis and catharsis; hamartia – a serious mistake, which is the main reason of downfall of the hero, this mistake is often made because of hubris – extreme pride, after the downfall the hero learns a lesson or makes a discovery – this is defined by the notion anagnorisis, reversal of fortune is called peripeteia, nemesis – means some circumstances, which the hero could not avoid, practically his fate.

Don't use plagiarized sources. Get your custom essay on
“ Sophocles` Oedipus The King And Shakespeare`S Othello ”
Get custom paper
NEW! smart matching with writer

The last one – catharsis – denotes the feeling of fear and pity experienced by the audience; in closing this should be a person who is “between these extremes . . . a person who is neither perfect in virtue and justice, nor one who falls into misfortune through vice and depravity, but rather, one who succumbs through some miscalculation” (Aristotle, 18).

Guided by the above-mentioned instructions we are going to analyze two famous plays: Sophocles’s Oedipus the king and Shakespeare’s Othello, namely their main heroes. Both Oedipus and Othello are tragic heroes.

They both show signs of hubris, yet they have admirable qualities that have raised them to the position they have. In fact, their very strengths are also their weaknesses. Most critics consider Oedipus the perfect example of tragic hero. Indeed if to evaluate the correspondence of Oedipus to the characteristics of Aristotle he meets all the parameters.

His nobility is out of question, as he was born in a royal family, although raised by adoptive parents, who were also the King and Queen of Corinth, and finally, when he managed to solve the riddle of Sphinx, he got the dominion over the city.

Shakespeare’s Othello is also a tragic hero and also corresponds to the Aristotle’s characteristics. Othello, as well as Oedipus, had to come through pride, fatal mistake and self-destruction. Othello is a noble man and an outstanding military leader. But in reality his greatness was combined with his weakness: on the one hand he was brave and intelligent, on the other hand he was somewhat passive and fell under the influence and allowed Iago manipulate him.

Oedipus’s hubris could be seen in his desire to prove to his city that he was able to solve the mystery and save the citizens from the plague. Besides he was rather self -assured, which can be confirmed by his own words in the opening lines of the prologue, when he states “Here I am myself–you all know me, the world knows my fame: I am Oedipus. ” (Sophocles, 11). Oedipus had every reason to believe that he was a prominent personality and he wanted to support his high status for his subordinates, in this way his strength unexpectedly for him turned into his weak side.

Hamartia of Oedipus is very important and sophisticated. His tragic flows rooted from his lack of knowledge about his true identity, but he could not be responsible for his flow as he was not able to change anything with his actions. In fact, Oedipus didn’t make any mistakes, he suffered the consequences of somebody else’s old mistake in the past. Actually the peripetea is closely related to hamartia of Oedipus, as the bad fortune followed the hero from his very birth.

Othello’s hamartia or downfall, when she killed his beloved wife, was the result of his hubris – he was so much afraid that his pride could be hurt in case of Desdemona’s unfaithfulness that he didn’t even stop to think whether all the Iago’s arguments were correct or not – “Thy honesty and love doth mince this matter… My friend, thy husband, honest, honest Iago” (Shakespeare, 8). Moreover he preferred to trust Iago instead of listening to his wife.

In this case such virtue as trust turned out to have a destructing force for the hero. In contrast to Oedipus Othello could avoid his tragic flow, if only his reaction to the words of Iago were different. Catharsis of the audience is characterized by very profound emotions and feelings of sympathy towards Oedipus, when he instead of committing suicide, chose terrible tortures for himself. When Oedipus realized what had happened to him in reality, he said: “Oh, oh, then everything has come out true.

Light, I shall not look on you Again. I have been born where I should not be born, I have been married where I should not marry, I have killed whom I should not kill; now all is clear” (Sophocles, 32). Being blind he belonged neither to this word nor to the other word, thus his suffering was not finished even at the end of the play. No doubts, that the audience experienced sympathy and pity for Othello after his murder. The realization of his awful deed hurt Othello deeply, but as distinct from Oedipus he chose suicide.

Overall, both heroes – Othello and Oedipus – could be referred to as classical examples of Aristotle’s tragic hero. They are both very strong and outstanding personalities, noble and fair; after getting their high positions they however developed such features as obstinacy, self-assurance, mightiness. Both of them took wrong decisions and became the victims of their fatal mistakes, which finally transformed their strengths into their weak points and led to tragic finals. 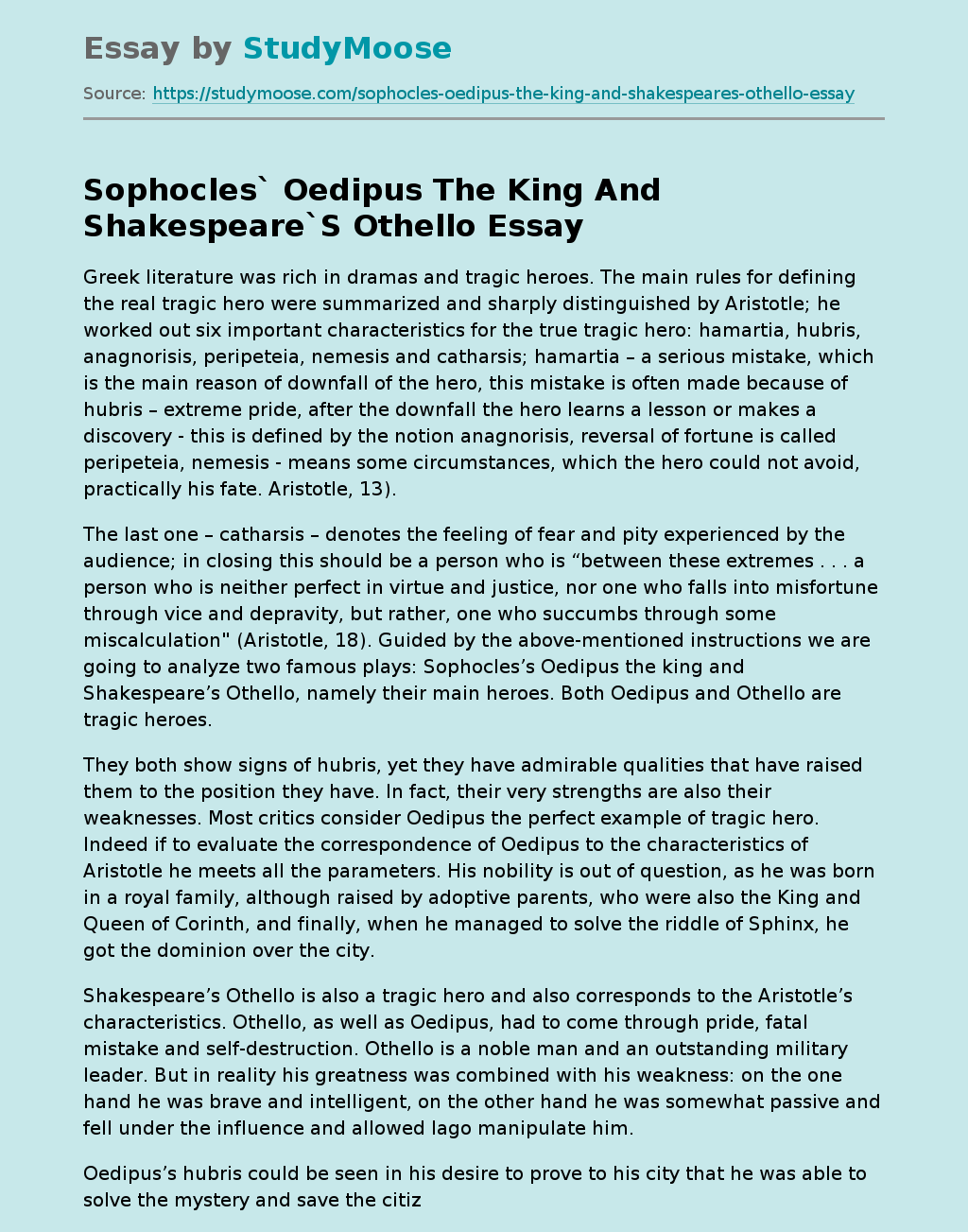