The Leadership Qualities of Oedipus and Kreon

Having leadership qualities means having charisma, resolves and protecting your citizens from any aspects that can come to harm them. The playwright portrays Oedipus as the King who cares for his people above all else and Kreon as a royalty, who attends only to hedonic lifestyle.

In the citizen’s eyes, Oedipus is seen as a good leader. He demonstrates great leadership through several events. When the Oedipus learned of the plague, he “sent away [his] brother-in-law, son of Menoeceus, Kreon, to Pythian Apollo’s shrine” to hear from Apollo on “what [he] might do or say to save our city.

Don't use plagiarized sources. Get your custom essay on
“ The Leadership Qualities of Oedipus and Kreon ”
Get custom paper
NEW! smart matching with writer

” He notified the people that he understands their pain and suffering for the “soul inside [him] sorrows for [himself] and for the city, and for [the people]—all together”. Oedipus demonstrates more leadership qualities by being honest, truthful and determined to his people. As Kreon brings good news back from the oracle, he tells Oedipus “if [he] wish to hear the news in public” that he is “prepared to speak”.

Instead of “[stepping] inside” to hear the news, Oedipus told Kreon to announce the news in front of the people, indicating to his people that he has nothing to hide. As Kreon tells the people that the only way to get rid of the plague is to find the sources of the former King Laius’ murderer and to punish that person by execution or exile.

As Oedipus questions Kreon on who, when, where, why & how Laius was killed, he will remove “this polluting stain”, “not for some distant friend, but for [himself]”.

By asking specific questions, Oedipus display great intellects and determination to find the source as quickly as possible. As Kreon finish his announcement, Oedipus immediately seeks out to unravel the murderer of the former King. All of these qualities are expected in a leader, like Oedipus, but is hard to find in Kreon. In contrast, Kreon, unlike Oedipus, is portrayed as a poor leader with qualities which makes him unlikely to rule Thebes. When Oedipus accused Kreon of teaming up with Teiresias and revealing Oedipus to be Laius’ murderer, he explains his leadership in a poor way to justify that he is innocent. Kreon demonstrates that even though he rules as an equal third power of Thebes, he asked Oedipus if “anyone prefer to rule and have to cope with fear rather than live in peace, carefree and safe, if his power were the same?”

In another sense, Kreon does not want to be a king and be burden with the people’s needs and concerns, since he has no intention to “[perform] royal acts”. Kreon is the type of person who does things according to his favor where there is a gain for him as he “not yet so mistaken in [his] mind that [he] want things which bring no benefits”. After all, Kreon tells Oedipus that he is “[greeted by] all men, and they all welcome me”, and those that wanted something from Oedipus “now flatter [him], since [he’s] the one who brings success in what they want”. However, Kreon did displays a little bit of leadership qualities during the accusation between him and Oedipus. Kreon tried to tell Oedipus calm down and listen because it is Oedipus’ “turn now to listen to hear [him] make a suitable response”.

This shows that Kreon is a cool-headed person that thinks before he speaks, which is a good leadership quality. Furthermore, Kreon demonstrates his scholars’ intellects by telling Oedipus that “to throw away a noble friend is like a man who parts with his own life, the thing most dear to him. Give it some time”. In other words, Kreon is trying to tell Oedipus to not jump to conclusion for his decision as a King could cost him his trusted friends, family and the trust of his people. By advising Oedipus to think it through before accusing someone with no proof, Kreon tells him that only “time can fully validate a man who’s true. A bad man is exposed in just one day”. In a sense, Kreon is just telling Oedipus that with enough time and through investigation, the murderer will be exposed quickly in one day times.

The Leadership Qualities of Oedipus and Kreon. (2017, Feb 02). Retrieved from http://studymoose.com/the-leadership-qualities-of-oedipus-and-kreon-essay 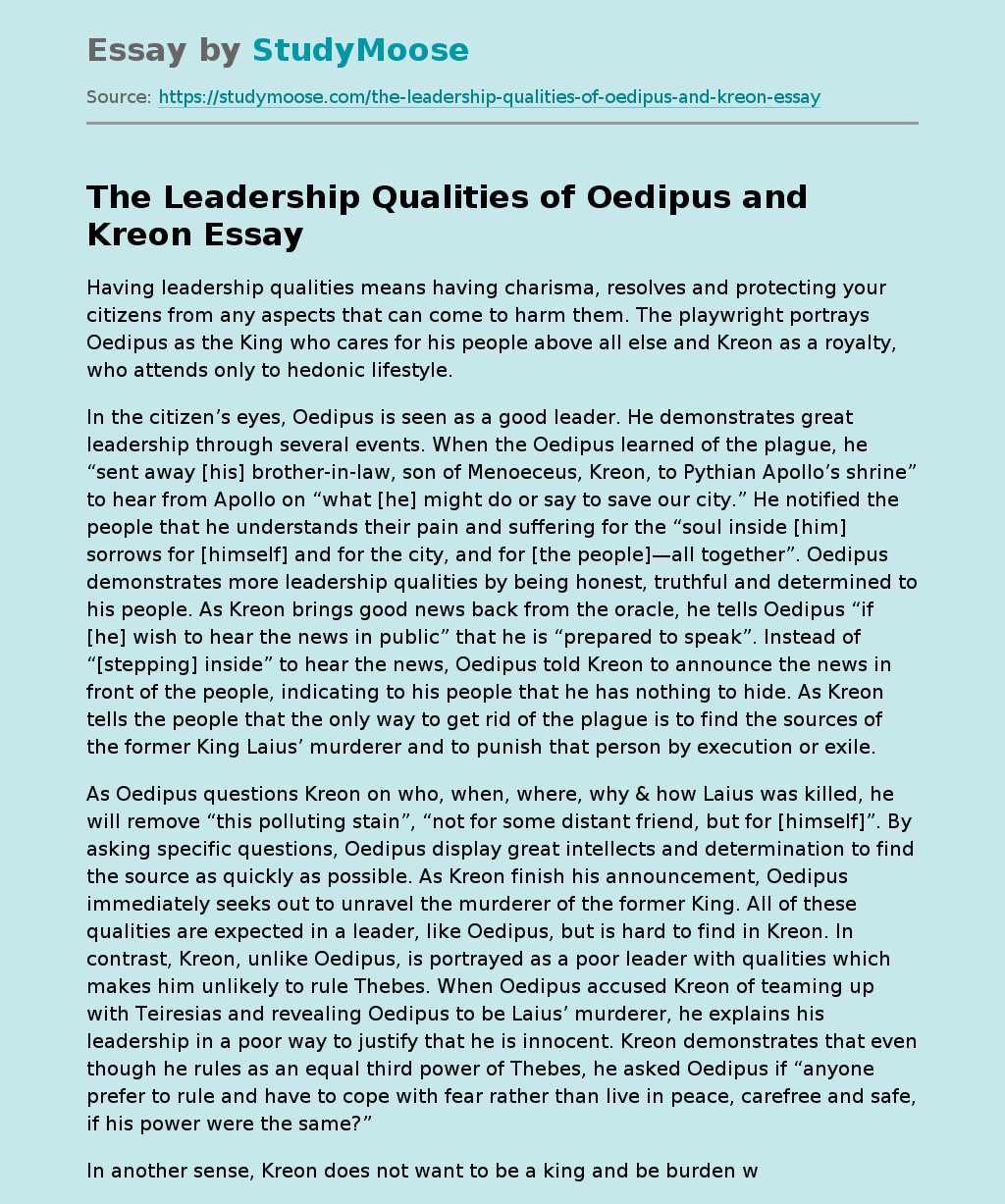