Analysis of Sophocles’ Creon in Oedipus the King

Sophocles is considered one of the most profound and best tragedians in the Ancient Greek. Sophocles came from a wealthy family and was highly learned and skilled. At young age, he had already seen many plays that were exhibited in ancient Greek theatres during his time. One of his favorite dramatist-writer was Aeschylus, whom he had replaced after a few years. Sophocles had written many plays; scholars estimated that he had written about one hundred and twenty plays yet only a few of them had remained in complete form.

Don't use plagiarized sources. Get your custom essay on
“ Analysis of Sophocles’ Creon in Oedipus the King ”
Get custom paper
NEW! smart matching with writer

Yet, those plays were enough to define the immense tragedian behind the great works that were still venerated today. However, the reasons behind the popularity of Sophocles were due to his style and wit; and as many chroniclers asserted, he always surprised the audience. The plays of Sophocles were mythical and dealt with society- deviant ideas. He also asserted in his plays the act of fate in one’s life, even though many linguists had described this as force coincidence.

Proficient in: Oedipus The King

Moreover, one of the immortal characters, aside from King Oedipus in the famous trilogy of Sophocles, was Creon.

Creon was Jocasta’s brother and one of those who held the Theban throne. Laius, the King of Thebes had entrusted the throne to Creon while he was in Delphi to confer with the oracle. Meanwhile, the Sphinx and its spell had assailed the city. Creon, learning that Laius was dead, had offered the hand of her sister, Jocasta – the queen, to anyone who could solve the puzzle.

Oedipus, the son of Jocasta who fled from Corinth had solved the puzzle of the Sphinx and was married to his mother. Creon had been instrumental in the fulfillment of the prophecy about Oedipus.

Yet, Creon was unaware that Oedipus was the son of her sister. Moreover, Creon yielded the throne to Oedipus. He helped Oedipus in establishing and in strengthening the kingdom. He had been a constant adviser to Oedipus and had been his counter-ego. Creon was liked a brother to Oedipus that he had helped him in those troubled time where the latter was in the midst of discovering that the prophecy which he tried to escape had occurred to him. Yet, in Oedipus the King, Creon had been faithful to Oedipus.

He had referred him to Teiresias, the blind prophet in order to know the cause of the plaguing of the city. However, they had known from Teiresias that the reason was Oedipus himself. Nonetheless, Oedipus had accused Creon of treason and conspiracy. Yet, Creon had denied the allegations of Oedipus, pointing out that he would not benefit in overthrowing him. Yet, Oedipus had known that the statements of Teirisias were true, so he requested Creon to put him to incarceration and exile to stop the plague that had been attacking the city.

They should always consult the prophets and the oracles. That was the reason why Creon had consulted Teiresias, the blind prophet, regarding the plague that had been attacking the city. Yet, Oedipus was a very stubborn king. He did not believe the assertions and claims of Teiresias. He tried to assert his own will and his own power as a king. Yet, Creon had been his counsel and after realizing his follies he had yielded the throne to Creon and imposed a self-exile to him.

Yet, he was the one who sought forgiveness in the last part of Antigone, when his son had died due to his decree. Therefore, Creon in the plays of Sophocles had shown the characteristics of a good king. He had been loyal and honest to his country. He upheld the laws and the edicts strictly. He honored the gods and the deities. He honored those who served their countries well and despised those who serve as threats to the country. He had been a good family man. He was not stubborn yet he followed the orders of the prophets and the oracles. He was religious and pious.

Yet, even though Friedlander (1999) had asserted that Sophocles plays were not “family entertainment,” yet the variety of characters and the style was outstanding. The way Socrates projected his play had always attracted audiences, both in his time and in the modern times. He was very creative just like the varied, changing and unique characters like Creon that he had created.

Analysis of Sophocles’ Creon in Oedipus the King. (2017, Mar 21). Retrieved from http://studymoose.com/analysis-of-sophocles-creon-in-oedipus-the-king-essay 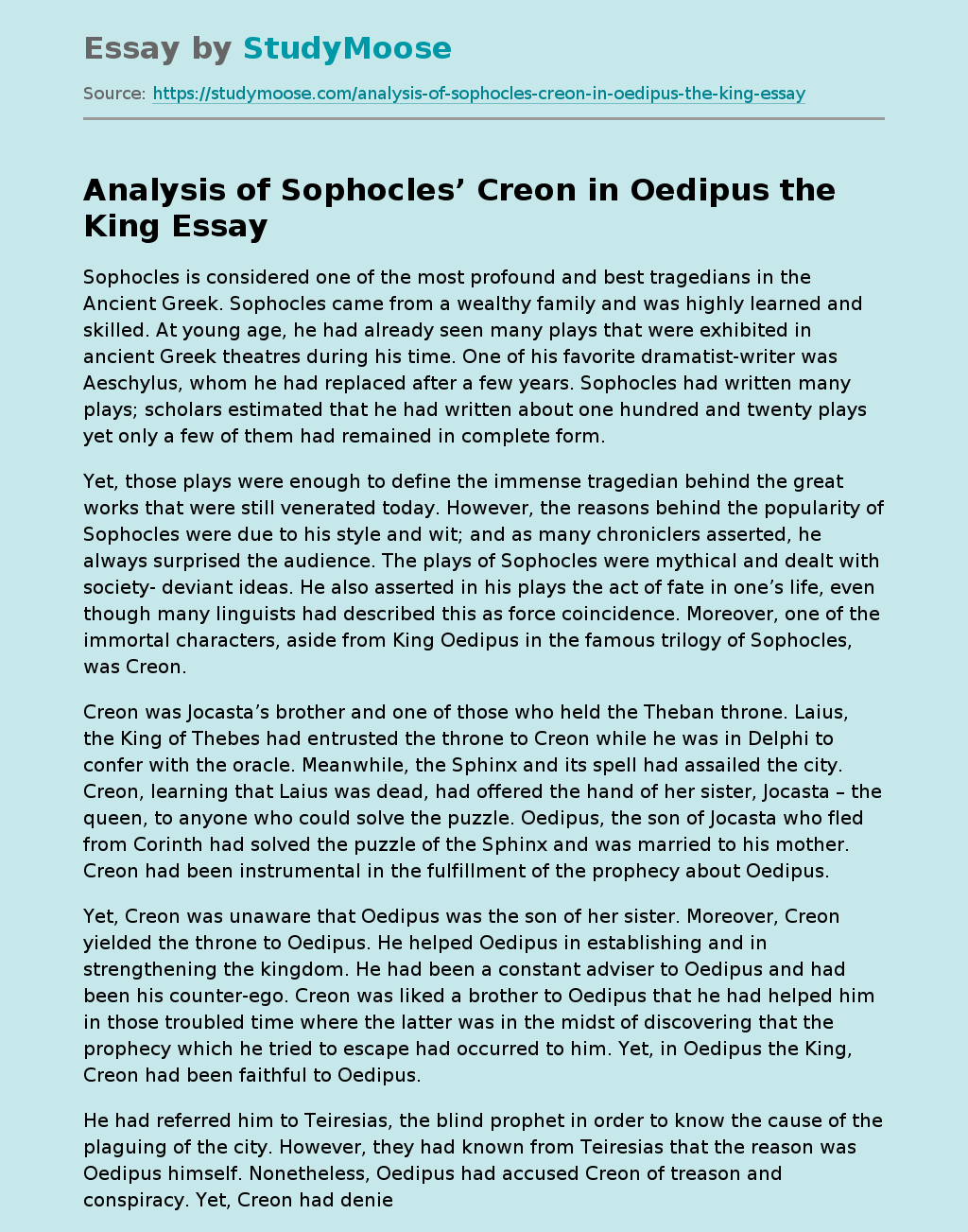