Two poems that focus on love as a theme are Warming Her Pearls by Carol Ann Duffy and Epithalamium by Liz Lochhead. Warming her Pearls depicts a situation in which a servant speaks of her unrequited love for her mistress, whereas Epithalamium is a celebration of marriage. In examining how each poet writes about love, a good place to start is the titles of the poems. Warming Her Pearls is an ambiguous title that does not immediately relate to love. However, the continuous nature of, “warming,” implies that the speaker’s love for her unnamed mistress is always at the forefront of her mind.

Don't use plagiarized sources. Get your custom essay on
“ Compare and contrast two poems, Warming Her Pearls by Carol Ann Duffy and Epithalamium by Liz Lochhea ”
Get custom paper
NEW! smart matching with writer

Contrastingly, Epithalamium is a more obviously romantic title. An epithalamium is a form of poetry carried from Ancient Greek, and was intended to be spoken to the wife as she was brought to bed on the night of a wedding, thus conveying that the poem will have a more positive outlook towards love. Moving on, both poems use vivid imagery to capture the complex nature of love.

Warming her Pearls focusses mostly on the physical attraction of love, whereas Epithalamium focusses on love more as an emotional ideal.

For example, in the first stanza of Warming Her Pearls Duffy writes, “Next to my own skin, her pearls,” conveying a deep intimate attraction between maid and mistress. The antithesis of, “warm,” and, “cool,” in the first stanza emphasise the unrequited nature of the love. On the other hand, whenever Lochhead uses physical imagery it is a more reciprocated love: “Sweet ceremony, then hand-in-hand we go.

” The sibilance and repetition in the opening line highlights the harmony between the couple.

The service is described as “sweet”, an adjective that usually describes food or children but here suggests the hopeful innocence that accompanies the love of a newly married couple. In Warming Her Pearls Duffy uses a female voice that adopts a traditionally male stance; this is a poem about one woman’s sexual desire for another. The pearls transcend both class and sexuality. Repeated use of a similar construction to stress how the speaker is absorbed by thoughts of her mistress: “I think of her”; “I dream of her”; “I see her. ” The speaker cleverly describes the pearls as, “rope,” which has connotations of control and entrapment.

Her desires are illegal. This is a metaphor in which the servant suggests that her love is like the rope that binds a slave. The imagery in Epithalamium is much more positive, using pathetic fallacy to convey the joys of love: “It’s like when sunlight flings / A sudden shaft that lights up glamorous the rain. ” The simile is a celebration of the transforming power of marital love, as well as being a sexual pun. It transforms something as mundane as rain into something glamorous, in the same way that love can transform the most ordinary events into something wonderful.

Lochhead’s repeated use of plural pronouns such as, “we,” and, “us,” stress the universality of the experience of love. There is no such universality in Warming Her Pearls, the maid is truly on her own in love. A recurring theme throughout Warming Her Pearls is imagery related to night and dreams: “I dream about her. ” The speaker is blunt and to the point. She can only dream. The imagery is continued into the conclusion of the poem: “Full Moon. ” In mythology a full moon is symbolic of love’s madness, but ironically can also symbolise chastity. The speaker is reduced to imagining, “her every movement in my head. At this point the speaker shifts from desire to unrestrained obsession. The final image in the poem is of the cool, sleeping mistress contrasted with the awake and burning maid, the ultimate expression of the vast distance between them and the unrequited love that will never be realised.

The conclusion of Epithalamium, on the other hand, emphasises a sense of togetherness and rebirth: “your quotidian friends / Put on, with gladrag finery today, your joy. ” This archaic language coupled with the blend of literal and metaphorical accentuates the celebration of love. Lochhead writes, “They won’t let old griefs, old lives destroy. The juxtaposition between new and old conveys a sense of hope for the future, in direct comparison to the hopeless outlook for the maid in Warming Her Pearls. Furthermore, the tone of the poems aptly reflects the love presented. The tone of Epithalamium is celebratory and lacks the cynicism about love that often appears in Lochhead’s poetry. Positive language such as, “Delight’s infectious,” is used throughout the poem, revealing the thoroughly optimistic view of love Lochhead presents. The tone of Warming Her Pearls has both elements of the joys of love (“she’s beautiful”) and the yearning of unrequited love (“as though I want to speak”).

The tone of the poems conveys the fundamental difference between desire that is soon to be fulfilled and a desire that can never be fulfilled. Both poems have a comparatively constant tone throughout, suggesting that their love is relentless and unchangeable. Finally, a key aspect that must be considered when analysing any poem is the poets’ use of form and structure. Warming Her Pearls is written in the form of a dramatic monologue in blank verse, where Duffy explores love from the speaker’s perspective. The mistress never speaks, displaying the distance between her and the speaker.

Contrastingly, the form of Epithalamium is a traditional Shakespearean sonnet which is evermore associated with love poetry. The love presented by Lochhead is much more traditional than what Duffy writes about, so it is fitting that Epithalamium has a more traditional form. Both poems have carefully constructed stanzas. Epithalamium uses two stanzas, one octet and a sestet, whereas Warming Her Pearls has six stanzas, each containing four lines. This intricate construction of both poems gives a sense of meticulous contemplation of love. However, a key contrast between the poems’ structures is their use of rhyme.

Epithalamium has a constant sonnet rhyme scheme, ending with an effective rhyming couplet at the end (“laid/remade”) stressing the central idea that love has a transformative power. Contrastingly, Warming Her Pearls does not have any rhyme scheme. This may suggest that the speaker doesn’t feel there is harmony in her way of life, and that her love will never be completed. In terms of punctuation, in Warming Her Pearls Duffy utilises her diction for maximum effect. There is extensive use of enjambment which conveys urgency as it links the women, suggesting that the speaker longs for joining and completion of her love.

Some of the sentences are short, with words left out and the language is simple, such as: “Slack on my neck, her rope. ” A run on line connects stanza one with stanza two and stanza five with stanza six. Full stops are placed at various points of the poem, only four of them at the end of a line. There are ten other full stops or question marks at various points of lines; this is unusual for a poem. The seemingly unsystematic punctuation suggests that the speaker’s love is not under her own control.

This is a direct contrast with Epithalamium, where Lochhead uses longer sentences broken up with complex punctuation such as dashes and colons: “but all we know / Is: Love surprises us. ” The direct and logical punctuation gives a more traditional view of love. To conclude, Warming Her Pearls by Carol Ann Duffy and Epithalamium by Liz Lochhead both effectively use language to convey impressions of love that are very different in situation but emotionally similar. They capture the intensity of emotion that love brings, regardless of who it is directed at. 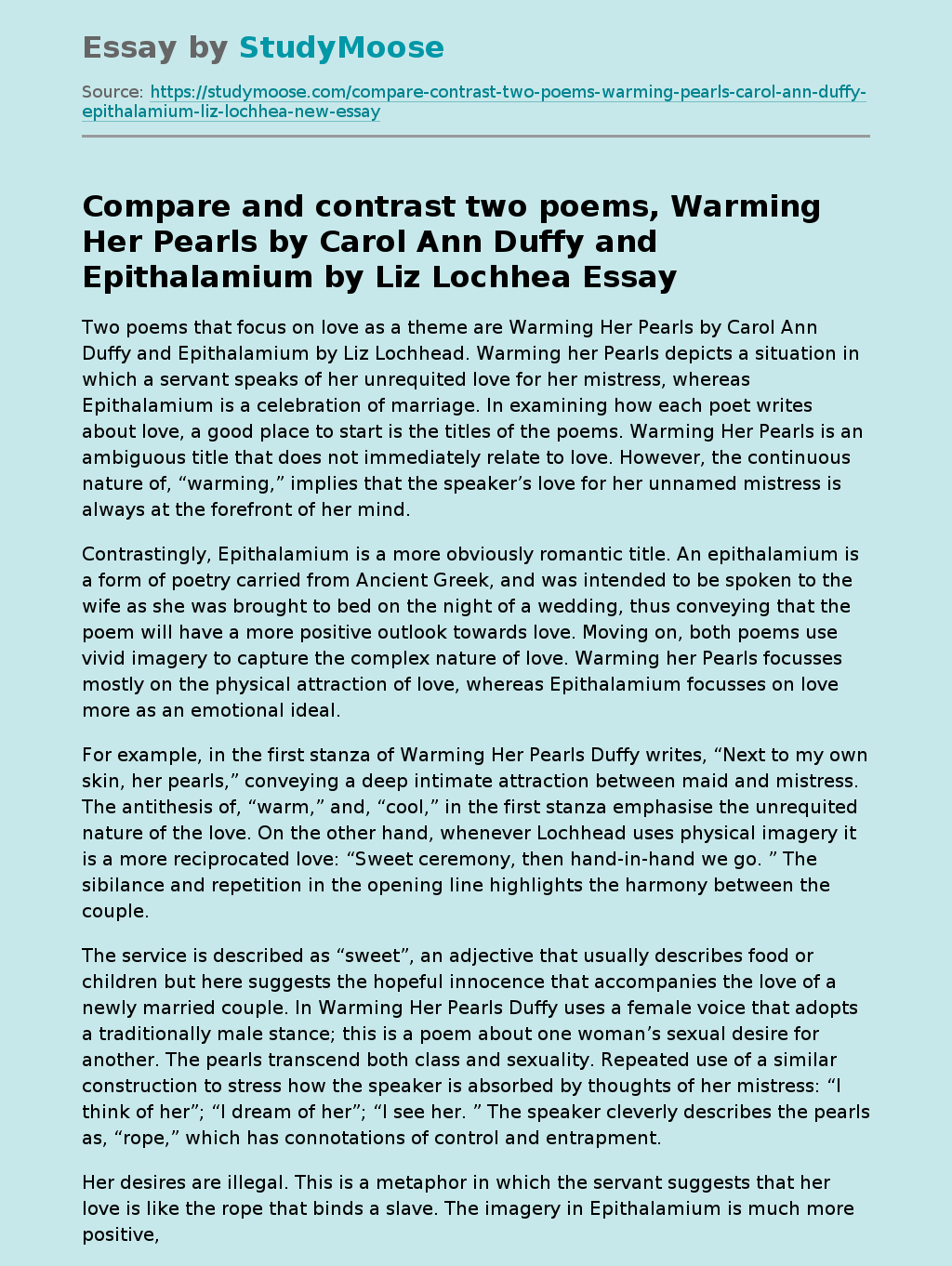