Rousseau and Hobbes' Conception of State of Nature

Both Rousseau and Hobbes talked about state of nature but their understanding of state of nature and the first living of humanity is quite different from each other. Their views are similar in some points but mostly they contrast with each other. These differences in their thoughts are mainly because of their understanding of human nature and also their view of man.

Don't use plagiarized sources. Get your custom essay on
“ Rousseau and Hobbes’ Conception of State of Nature ”
Get custom paper
NEW! smart matching with writer

Mainly Hobbes’ theory about human nature defines a competitive and violent environment among people and in contrary Rousseau is a little bit naive about the nature of man.

In my point of view, although both theories have their contraries Hobbes’ idea of state of nature is more relevant than Rousseau’s idealistic state of nature for some reasons.

First of all the difference between their definitions about the state of nature is about their understanding of human nature. If we look at Hobbes’ Leviathan we can see that he talks about the basic instincts of man. For him these instincts are about the will of living and will to be safe. So because of this will man could do anything to live and maintain this living in safety.

But also because of this reason every human is a danger for another.

And this danger causes an environment which is so similar to war. Because every individual is afraid of the harm that another individual could give, everybody feels unsafe and this causes them to feel as like they are in war. After the state and law people started acting not just for themselves also for the other individuals. They did not harm others in order not to get harm. After civilization although they did not lose their basic instincts they need to block themselves from those instincts and this blocking could only be possible with the help of a sovereign power.

So according to these thought we could say that Hobbes believes that society and civilization causes people to act more rational and peaceful when we compare their life in the state of nature. Rousseau firstly differs from Hobbes in the definition of state of nature. In his thoughts state of nature is not what Hobbes defines as. In his state of nature there are savage men who are removed from all their feelings, language even their ability to understand the others. And so n such place there is no need for power, people also live for their basic instincts and needs but in order to satisfy those needs they do not have to harm each other so there is no chance for it to be similar to state of war. Rousseau’s theory could be explained as a theory which is more positive than Hobbes’ state of nature. In my opinion Hobbes idea of state of nature is more relevant than Rousseau’s point of view firstly because of their definition of natural men. If we accept Rousseau’s argument there comes up a question.

If the natural man was that much peaceful and great than how come society become that much corrupted and also how could people do things that is not even in their nature. If humanity was that much naive and naturally good the society which they started cannot be bad as Rousseau’s definition. In this point Hobbes’ argument rescues us by saying that human is not naturally good they are mostly selfish and only live for their individual beings and so the society is a place where they try to be scrapped from their basic instincts to live in peace.

This explanation of Hobbes is clearly gives a better perception of human nature and the civil state. Another point is that in Rousseau’s state of nature it is hard for us to talk about human kind like they are high from any other species in the environment because in reality language, beliefs and these kind of things give people their superiority. For all of this we cannot think human is besides the other animals. So it should be relevant to look at the lives of those animals to compare with human life.

In Rousseau’s theory we should be accepting that these animals should be living together peacefully they shouldn’t be in any competition among each other and we should not see the corruption that Rousseau stated in their “society”. However it is so clear to see that the truth is in the opposite way. Animals are conversely very territorial and aggressive towards each other. They are just like in the Hobbes’ definition of “simple man”. Among all these differences both Hobbes and Rousseau agrees that human was equal in the state of nature.

For Rousseau this equality comes from the inequality in the society. He claims that people are always unequal from each other because their physical appearances, minds but this inequality becomes more significant after the civilization. And similarly Hobbes believes that the inequality is not so significant that might cause a division among human. In the light of the abovementioned points, not to mention any other, both Rousseau and Hobbes defines the state of nature on their own thoughts and they differ from each other in many points.

Rousseau and Hobbes' Conception of State of Nature. (2016, Sep 11). Retrieved from http://studymoose.com/re-rousseau-and-hobbes-conception-of-state-of-nature-essay 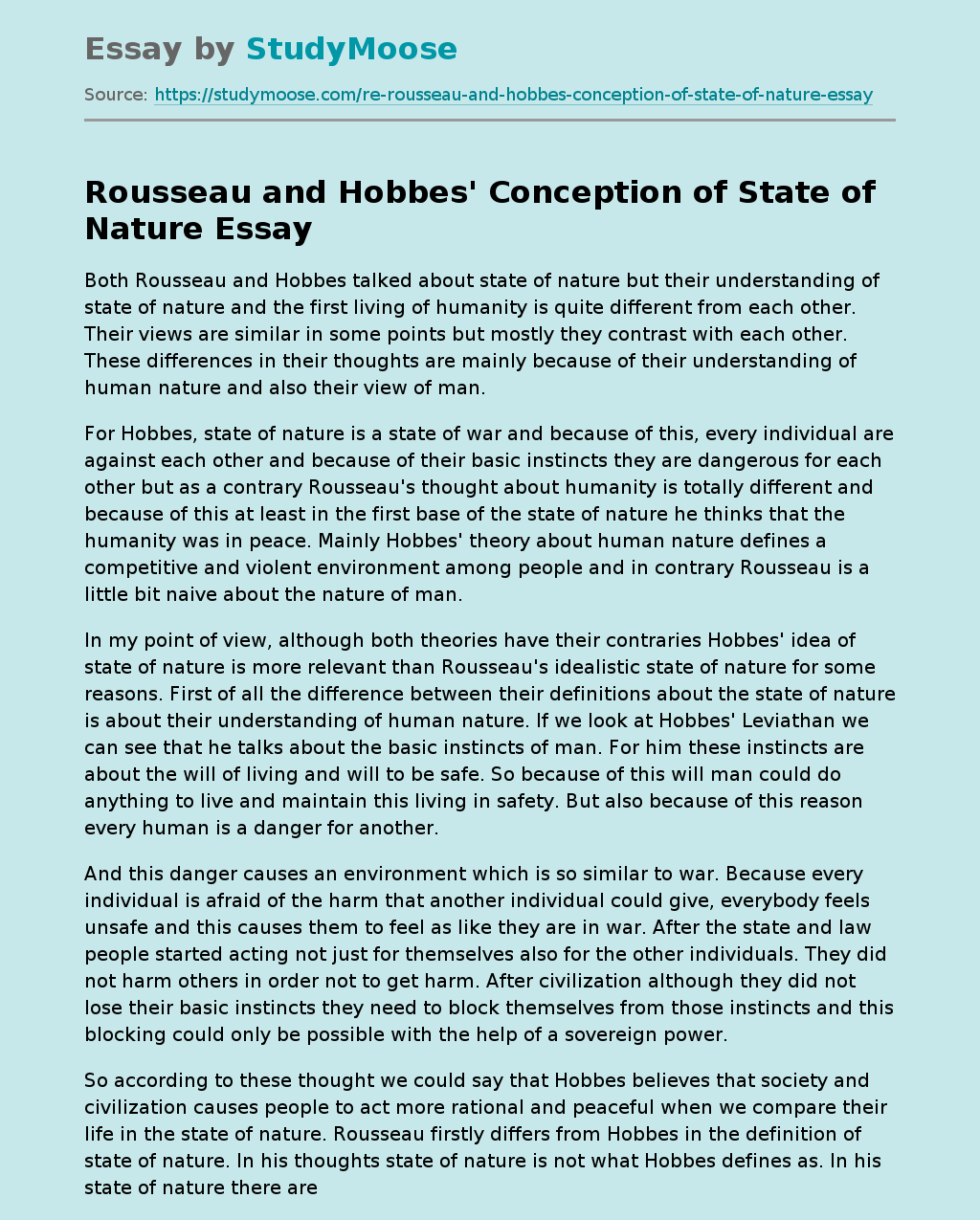