The Difference between Hobbes and Locke

Thomas Hobbes and John Locke were both commanding philosophers of their respective eras. Hobbes’ influences can be discerned in the philosophies of Locke. Both thinkers possess analogous qualities in their inquisitive flairs, on top of their topics in their writings. Notwithstanding that both philosophies understand the issue of the insecurity of the state of nature in much the same way, Locke and Hobbes they dispute for different resolutions of the given problem.

The given paper will compare and contrast Hobbes’ argument supporting absolute government to Locke’s argument supporting the separation of powers and will define strong points and disadvantages in both using the books Leviathan and Second Treatise of Government.

Don't use plagiarized sources. Get your custom essay on
“ The Difference between Hobbes and Locke ”
Get custom paper
NEW! smart matching with writer

Locke’s and Hobbes’ views on government in Leviathan and Second Treatise of Government Each of these philosophers puts forward his opinion of the contemporary situations in their times. To give an example, Hobbes writes about his view on the government of his day. Hobbes likewise utilizes certain appeals to his intended audience.

He tries to convince the audience to share thoroughly with his sentiments about the topic. He makes use of his opinion explicitly throughout the composition. Locke similarly brings these tactics into play and asserts his opinion in Second Treatise of Government. Locke attaches the contemporaneous state of affairs in his time to the moral dilapidation of society. He draws on factual information in tandem with his own earnest feelings about life in his time to sway the audience to sense that something should be done to improve the situation in sight.

Hobbes’ Leviathan compared to the philosophy of Locke Although the Leviathan is primarily a book on social and political philosophy, Thomas Hobbes, an English political theorist, had not intended to restrict his attention to that subject. Caught up in the rising tide of scientific discovery, he was deeply impressed by the precision of science and above all by the certainty of scientific knowledge. The intellectual atmosphere of the 16th and 17th centuries had been undergoing a radical alteration as one area of inquiry after another yielded to the probing method of science.

Hobbes caught the spirit of the times. Indeed, Hobbes sought to create a science of politics. Hobbes said that there are basic laws governing human behavior and that these laws are as precise as those in the physical world. If these laws were correctly understood, he said, it would be possible to create a government that works according to scientific principles. Hobbes believed that people act out of self-interest. Because they want power, possessions, security, honor and fame, they compete violently with each other.

Without government to make and enforce laws, Hobbes felt there would be a war “of every man against every man” (Hobbes, 1982, 188) In order to maintain civilized life, said Hobbes, a strong government must set rules that control human nature. Hobbes lived at the time of English Civil War and considered that conflict an example of the dangerous capacities of human nature. He maintained that a strong ruler was necessary to avoid total disorder. His book Leviathan compared the state to a whale, arguing that each must be controlled by a single mind, which is similar to Locke’s singlehanded kind of governance.

However, he did not believe that rulers derived their power from God. Rather, he introduced the idea that people made a “social contract” trading their liberties for order and good government (Hobbes, 1982, 272). Adopting the principle of the separation of powers, the founders created three separate branches of government: executive, legislative, and judicial. To prevent the concentration of power in any of the three branches, they set up a system of checks and balances.

As a political philosopher, Hobbes is frequently, though not accurately, called the father of modern totalitarianism. His book Leviathan read like grammars of obedience. He describes the relation between the citizen and sovereign in such severe terms that it is no wonder he brought upon himself widespread criticism. Two considerations led Hobbes to formulate his unique theory of political obligation. The first was the political turbulence of his times, which saw Cromwell preparing to lead his people in a savage civil war.

This experience of violence, growing out of deep disagreements on political matters, contrasted sharply in Hobbes’ mind with the relatively quick agreements people achieved in mathematical and scientific matters. Secondly, Hobbes looked at political philosophy as a variation of the science of physics. He assumed that from a thoroughly materialistic view of human nature, in which human behavior could be explained simply in terms of bodies in motion, he could formulate an accurate political philosophy.

He hoped that if political theory could be formulated with logical precision, people would be more likely to achieve agreement among themselves and thereby arrive at what Hobbes longed for most of all, namely, peace and order. There is some question whether Hobbes was logically consistent in his systematic political philosophy, and there is even greater question about his assumption that people would become orderly in their relations to each other just because they had been provided a logical plan for harmonious behavior.

In any case, his theory of humanity and society took its novel turn mainly because he built it according to a mechanical model, the chief ingredients of which were bodies and motivation. What’s striking about Hobbes’ theory of state is that he approaches the subject not from an historical point of view but from the vantage point of logic and analysis. He does not ask when did civil societies emerge but asks rather how do you explain the emergence of society. He hoped to discover the cause of civil society and, in harmony with his general method, he sets out to explain the cause of the state by describing the motion of bodies.

His thought about political philosophy resembles the method of geometry only in the sense that from axiom-like premises he deduces all the consequences or conclusions of his political theory, and most of these premises cluster around his conception of human nature. Second Treatise of Government compared to the philosophy of Hobbes Although the school of empiricism came upon the scene in an unpretentious way, it was destined to alter the course and concerns of modern philosophy.

John Locke, who was the founder of empiricism in Britain, aimed at the more modest objective of “clearing the ground a little, and removing some of the rubbish that lies in the way of knowledge” (Locke, 1995, 14). But in the process of “clearing” and “removing,” Locke hit upon a bold and original interpretation of how the mind works, and from this, described the kind and extent of knowledge we can expect from the human mind. In Second Treatise of Government, John Locke begins his political theory as Hobbes did, with a treatment of “the state of nature.” But he describes this condition in a very different way even making Hobbes the target of his remarks.

He said that “reason, which is that law, teaches all mankind who will but consult it, that, being all equal and independent, no one ought to harm another in his life, health, liberty, or possessions” (Locke, 1995, 6). This natural moral law is not simply the egotistical law of self-preservation but the positive recognition of each man’s value as a person by virtue of his status as a creature of God. This natural law implied natural rights with corresponding duties, and among these rights Locke emphasized particularly the right of private property. For Hobbes, there could be a right to property only after the legal order had been set up.

Locke said that the right to private property precedes the civil law, for it is grounded in the natural moral law. The justification if private ownership is labor. Conclusion According to both Hobbes and Locke, law begins only when there is a sovereign. This is a logical truism, for in the judicial or legal sense, a law is defined as a command of the sovereign, there is no law. To be sure, Hobbes and Locke affirmed that even in the state of nature people have knowledge of the natural law, and in a special sense the natural law is binding even in the state of nature.

But only after there is a sovereign can there be a legal order, because only then is there the apparatus of law in which the power of enforcement is central. Without the power to enforce, said Hobbes, covenants are mere words. Hobbes identifies law with sovereign command, and he makes the additional point that “there can be no unjust law” (Hobbes, 1982, 45). However ambiguous the moral theory may seem to us, Locke believed that these moral laws were eternally true, and upon the insights derived from the divine law he built his theory of natural rights.

Whether it is Hobbes’ philosophy of politics or Locke’s, all the same, politics simply is not feasible without authority. The most visible and widely accepted example of politics is the workings of the governmental institutions. However, although at first glance one may not be aware of it, politics in its various forms is present wherever and whenever humans form a community.

The Difference between Hobbes and Locke. (2017, Apr 17). Retrieved from http://studymoose.com/the-difference-between-hobbes-and-locke-essay 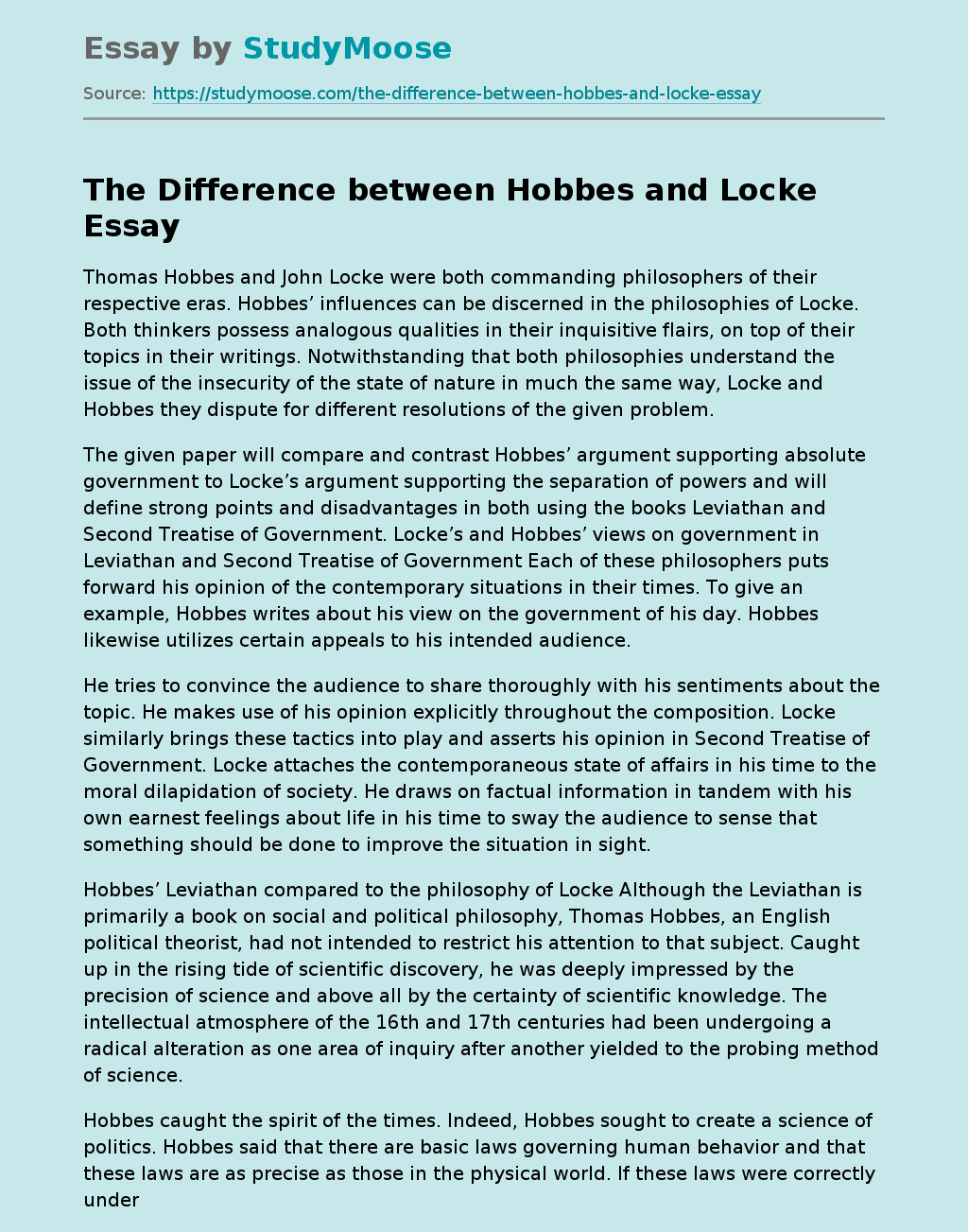