In any country, there are political leaders who run their nations with the help of representatives of society. “Men make history and not the other way around. In periods where there is no leadership, society stands still. Progress occurs when courageous, skillful leaders seize the opportunity to change things for the better”. This quote by Harry Truman is similar to Thomas Hobbes’ beliefs. Hobbes believed that if we want to live in a society peacefully and harmoniously we need to surrender some of our rights and have a single leader.

Don't use plagiarized sources. Get your custom essay on
“ Thomas Hobbes and John Stuart Mill ”
Get custom paper
NEW! smart matching with writer

However, his theory was contrary to John Stuart Mill’s beliefs, that each and every single person of society should be their own leader. In regards to Hobbes, he believed in the natural right of self-preservation. He believed that human beings are greedy and have unlimited desires; they overuse their individual judgments and act on instinct, rather than reasoned responses, which is why there is great insecurity and instability in the state of nature.

Hobbes also came up with the social contract theory, which states that we give the power to one individual and in doing this, we lose some of our own rights for the good of society. Ultimately, the effectiveness of the social contract depends on our ability as a society to obtain a satisfactory balance between what we want and what we are prepared to give up for it (“The Human Project” 148). Hobbes argued for an autocracy because it would be a strong-central government and would have power over all issues.

However, in order for the country to be politically and socially stable, we would have to give up not only some of our desires but most of our rights as well. Mill, on the other hand, was concerned with human happiness and liberty, and wanted to limit state authority. He believed that happiness is secured when we as individuals have sovereignty. Mill believed that a liberal government would allow one the freedom of expression and freedom of thought, on the condition that other members of society are not harmed.

Even though he wanted the government to preserve the rights and freedoms of individuals, Mill was against the idea of total neglect on the government’s part and wanted the government to intervene in the hopes of providing individuals with the means to make good choices through enlightened education, progressive laws and a fair justice system (“The Human Project” 155). People, in Mill’s opinion, are decent and rational, cooperative and sensitive to needs of others by nature; therefore, they have the ability to choose what is best for themselves (“The Human Project” 154).

However, what one thing is best for one person or a group of people may not be best for the rest of society. There would be conflicts because of the increase in freedom for everyone in society. Therefore, I agree with Hobbes’ idea of a government because I also believe that people are greedy and have unlimited desires, and that in order to live in a peacefully functioning society we need to be constantly kept in check. With a sovereign leader it will be easier to control and solve issues that arise. 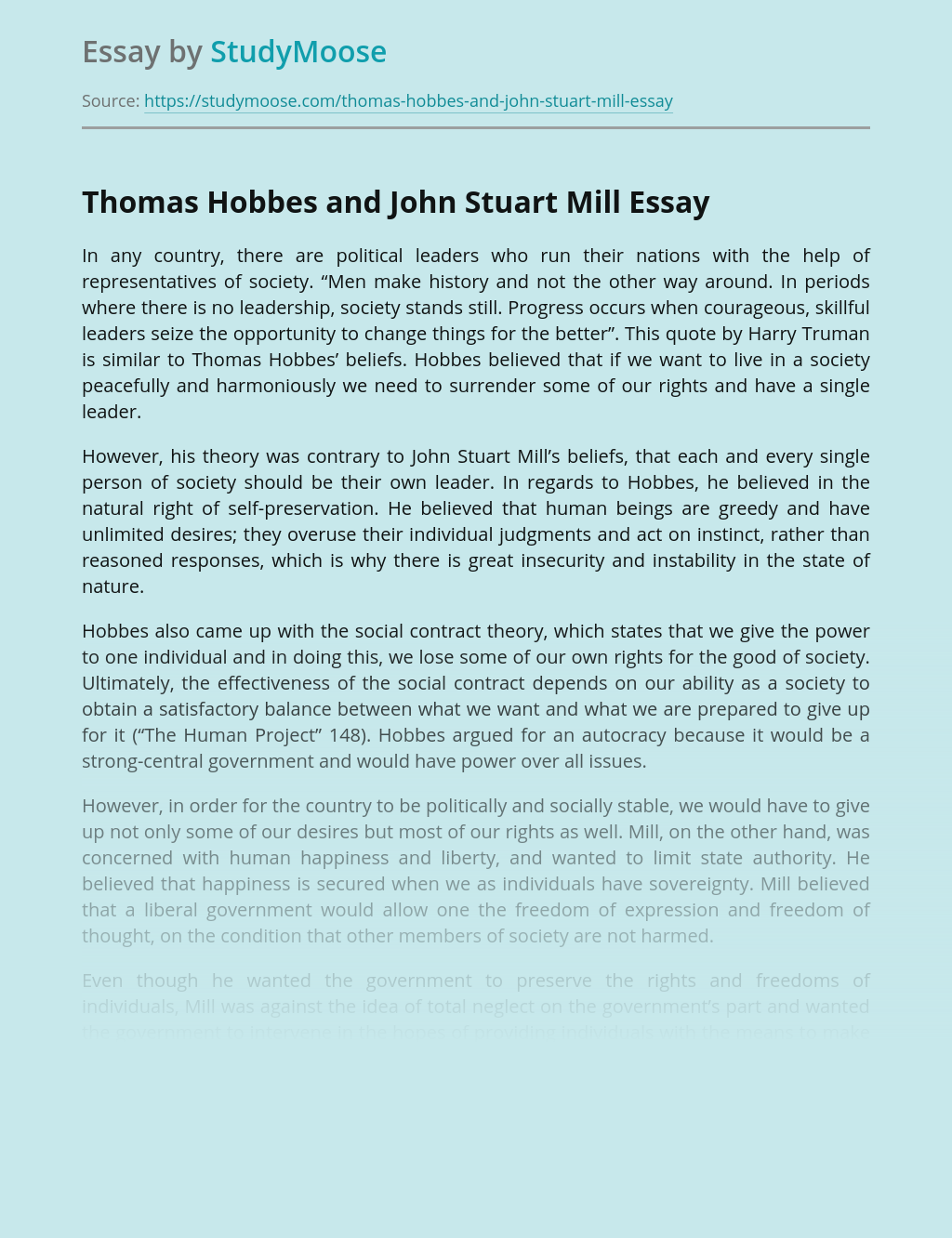