The project will cost $18 million, with $16 million in 2007 and an additional $2 million in 2008. The $18 million investment will be depreciated using the straight-line method for six years and a zero salvage value. Although, the equipment is believed to be able to be sold at the end of the project for $1.8 million.

The main purpose of the project is to save on operational costs by producing shortwood. The cost savings is estimated to be $2 million in the first year and $3.5 million in the following five years. In addition, the longwood yard would provide enough capacity to allow Blue Ridge Mill to sell shortwood on the market.

Bob Prescott confidently estimates that shortwood sales in 2008 will be $4 million, and will increase to $10 million in the remaining five years. There are also expenses from the new shortwood sales as well as tax expenses.

Cost of goods sold (COGS) is estimated to be 75% of the new shortwood revenue. In addition, Sales, General and Administration (SG&A) expenses are estimated at 5% of the additional revenue. Blue Ridge Mill will also need to invest working capital as sales increase. The additional working capital required is estimated at 10% of the change in revenues from the previous year. However, the investment in working capital is fully recovered at the end of the project. Finally, the income tax rate for the company is 40% of earnings. Table 1 below shows all of the incremental cash flows as a result of this project.

The internal rate of return (IRR) from the free cash flows of the project based on the estimates given by Bob Prescott is 11.30%, which is lower than the company’s published hurdle rate of 15%. However, that hurdle rate was calculated 10 years ago when the 30 year Treasury Bond was around 10%, more than double current interest rates (see table 2 below). Therefore, it is recommended that a weighted average return rate (WACC) be calculated and used as that hurdle rate. In order to calculate the WACC, the cost of debt and the cost of equity must be calculated first based on the information provided by the case. The interest rates and market risk premium are found in Table 2, and the company’s balance data, bond rating, Beta, and tax rate are found in Table 3. It is assumed that the debt and equity listed in Table 3 represents all of the debt and equity for the company.

The cost of debt is the weighted average cost of each debt held by the company. Table shows two debts to include: a bank loan payable at 6.38% (LIBOR + 1%) and Long Term debt. LIBOR is a floating interest rate that changes daily. However, since the bank loan is only a small portion of the total debt, the floating LIBOR will be ignored and treated as a fixed LIBOR. Since the company has a Bond Rate of A, the company’s long term debt is at 5.78%. As a result, the cost of debt is 5.88% and is calculated as follows:

The cost of equity can be calculated by using the capital asset pricing model (CAPM). CAPM requires that a market risk free rate, the market risk premium, and the beta for the company. The market risk premium (6%) and the company beta (1.1) is given directly and can be seen in tables 2 and 3 below. Government bonds are used for the risk free rate. Since 10 year corporate bonds are used for the cost of debt, the 10 year Treasury Bond of 5.60% will be selected as the risk free rate. The 10 year bonds are also a good match for the project duration, which is between 5 and 10 years. The cost of equity of 11.20% is than calculated as follows:

Using the calculated WACC and the company’s hurdle rate for this project, under Bob Prescott’s cost savings and additional revenues assumption, the project’s IRR is now greater than the hurdle rate. Furthermore, the net present value (NPV), payback period and the additional value added to the earnings per share (EPS) are shown in Table 4 below. Using just these figures, the project should be accepted. However, prior to making that decision, the base assumptions should be examined closer.

Sales demand for the excess produced shortwood and the savings in operations costs due to the project were both estimates and may not match the actual values in the years to come. These two values where adjusted to perform a sensitivity analysis on how these changes influence the NPV. Table 4 shows the result of the sensitivity analysis. The Sales Demand is represented in the first column and ranges from $0 to $12 million. Values from $0 to $4 million are used for all six years. For values greater than $4 million, $4 million is used for the first year, and the larger number is used for the remaining five years. Operation savings is shown as percentages across the top row. These represent percent changes to the amount estimated in the base case. For example, -10% means that instead of a savings of $2 million in the first year and $3.5 million in the remaining years, the realized savings are $1.8 million in the first year and $3.15 million in the remaining years. Positive percentages mean that savings were greater than the expected amount.

If operations savings are 10% less than expected, than new sales with have to be 40% less. Presumably, Bob Prescott has very good data on the operations savings and the actual is within 10% of the estimated, than the sales data can be off as much as 40% before this becomes a negative project. However, because there are possible negative values in the sensitivity analysis (especially at $4 million in sales), there is still risk in having a negative NPV project.

A desired piece of information that would be useful in this decision would be to calculate expect values for operations savings and sales demand. Table 5 show an example of using possible outcomes and their probabilities to calculate the expected values. To make the example complete, the expect values where inputted into the model and project performance is shown as part of Table 5.

To make a final decision on whether to accept the longwood yard project, other risks can be considered. Particularly, what are the risks if the project is not accepted? One risk hinges on the fact that Blue Ridge Mills will still be depended on Shenandoah Mill for the supply of shortwood. There are two risks. First, there is a supply shortage risk. Shenandoah may find other ways to use their shortwood, which would reduce the excess amount they use for sales. If Blue Ridge Mills does not receive enough supplies, than they will not be able to provide the company with the volume required, which could reduce the amount of paper production, resulting in a loss of sales. Another risk with Shenandoah Mill is the risk of shortwood price increases. This could happen if another consumer of shortwood enters the market. If shortwood prices increase, profit margins for Worldwide Paper will decrease.

Another risk to consider is the paper industry market. If Worldwide Paper Company’s paper sales volume declines, Blue Ridge Mill’s production will need to slow down as well. This is because they only supply one product to one customer, Worldwide Paper. The longwood yard project would help Blue Ridge Mill diversify and reduce that risk.

Both of these risks could be quantified and added to the model’s sensitivity analysis if more financial data and shortwood market data where available. This could be done by calculating the expected values of the impact of shortwood supply shortages and declines in the paper market. These expected values would then be added as an increase in annual project value, increasing the project cash flows through the life of the project. As a result, the sensitivity analysis would show that the project will provide positive NPV through greater reductions of the operations savings and new shortwood revenues than what is shown on table 4, giving a stronger case for acceptance.

Although the initial response would have been to reject the project based off of the project not meeting the company’s published 15% hurdle rate, evaluating the ten year old hurdle rate reveals that this rate is about 8% too high based on 2006 Treasury Bond rates. Using the updated hurdle rate of 7%, the project does surpass this rate with an 11.2% IRR and provides Blue Ridge Mill with a $2.64 million NPV return on the project investment.

Preforming a sensitivity analysis on the estimated savings and additional revenues of the project shows that the project’s rate of return remains above the 7% hurdle rate for most of the reasonable reductions in those input variables. Considering the risks of Blue Ridge Mill’s shortwood supply of either increase in prices or supply shortages adds further value to the project. Another risk that adds value to the project is the diversification the project creates, which could serve to protect Blue Ridge Mill from downturns in the paper market. As a result, Worldwide Paper Company should accept the longwood yard construction project at Blue Ridge Mill. 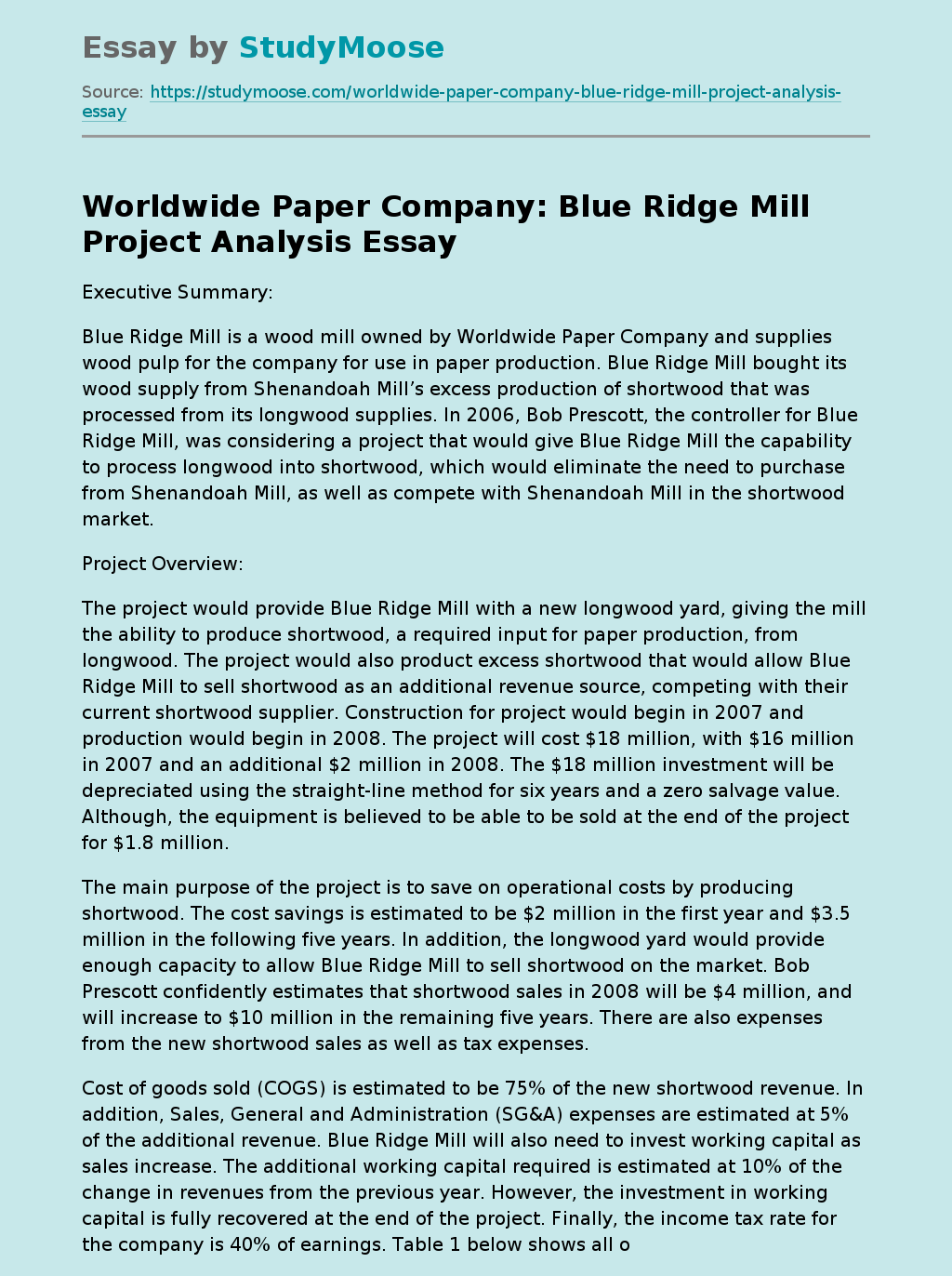