Blue Ridge Mill currently purchases shortwood from a nearby competing mill for pulp production. Bob Prescott, the controller for Blue Ridge Mill, is considering the addition of a new on-site longwood woodyard. The new woodyard would have two main benefits including the ability to eliminate the need to buy shortwood from an outside source and the opportunity to sell shortwood on the open market as a new market for Worldwide Paper Company. The new woodyard would allow Blue Ride Mill to decrease its operating costs as well as increase their revenues.

Turn in your highest-quality paper
Get a qualified writer to help you with
“ Worldwide Paper Case ”
Get high-quality paper
NEW! AI matching with writers

We analyzed projections to see if the benefits of the new on-site longwood woodyard exceed the $18 million capital outlay plus the incremental investment in working capital over the six-year life of the investment. By looking at multiple valuation methods, we were able to make a decision of whether the new addition would be beneficial to the company in maximizing shareholder wealth or destroy shareholder wealth. We began our analysis by outlining the investment.

The investment outlay would be spent over two calendar years with $16 million being spent in 2007 and $2 million in 2008.

The formula for weighted average cost of capital, or WACC, is (% of debt on the company’s balance sheet multiplied by the after-tax cost of debt) + (% of equity on the balance sheet multiplied by cost of equity). To determine percentages of the debt and equity on books of Worldwide Paper Company, we first added all interest bearing liabilities which includes a bank loan payable of $500 and long-term debt of $2,500. This gave us a total debt of $3,000.

Next we added all of our equity on the balance sheet which was common equity of $500, retained earnings $2,000 and common stock of $12,000 which was calculated by taking the 500 shares outstanding multiplied by the recent market value per share of $24. This gave us a total equity figure of $14,500. The total of debt and equity combined equaled $17,500, 17% of which was debt, 83% of which was equity. This allowed us to proportionately weigh each category of capital in the WACC calculation. We then determined the after-tax cost of debt.

The formula for determining this is calculated by multiplying the interest rate that the company is charged on their outstanding debt by (1 minus the current tax rate). We determined that the interest rate that the company is charged is equal to 5. 78%. This was calculated using the ten year maturity corporate bond rating for the A bond rating. We then multiplied this by (1-. 40%) as the tax rate is 40%. We subtracted the tax rate from one because we needed to figure out the after-tax rate as the interest paid is tax deductible to Worldwide Paper Company. The formula then came out to 5. 78% (1-. 4%) = 3.

47% which is the after-tax cost of debt and it measures the risk banks and bondholders are taking when loaning Worldwide Paper Company money. The final step in the WACC calculation was the cost of equity calculation. The cost of equity measures the return the equity investors expect due to the risk of Worldwide Paper Company. The cost of equity equation is the risk free rate of return within the market plus the market risk premium historical average multiplied by the company’s beta. We used a risk free rate of return of 4. 60%. This is the rate of the ten year government bond which is essentially a risk free investment.

We chose the ten year rate because it was comparable to the ten year corporate bond rate that we used in calculating the after-tax cost of debt. We added the market risk premium of 6% to the 4. 60% because 6% is the rate that investors want above the risk free rate due to the risk of the investment. This equals 10. 6% which is then multiplied by the beta of the company of 1. 1. Beta is a measure of the stock’s volatility in relation to the market. A beta of 1. 1 means that Worldwide Paper Company has slightly higher volatility than the market does. The total cost of equity then calculates to equal 11.

2%. This tells us that given the risk taken in investing in the company, a shareholder should expect an 11. 2% return. All of these calculated figures can then be used to calculate the WACC which is (17% x 3. 47%) + (83% x 11. 2%) = 9. 87% WACC. This WACC percentage can then be used to value the investment and as a comparative in valuation methods. The full calculation and numerical values are shown in Appendix 1. We valued the company using four different methods; Net Present Value, Internal Rate of Return, Modified Internal Rate of Return and Profitability Index.

We began with the Net Present Value, or NPV, calculation. NPV values an investment’s profitability based on the projected future cash inflows and outflows of the investment, discounted back to present value using the WACC. The calculations for NPV are presented in Appendix 2. We started by separating cash inflows and outflows by each year. We used Bob Prescott’s estimates for the revenue per year and related operating costs of cost of goods sold as 75% of revenues and selling, general and administrative expenses as 5% of revenues.

In this calculation we also added the annual savings projected by Mr. Prescott and subtracted depreciation as an expense. We took depreciation of $3,000,000 each year, beginning in 2008 when the total investment had been spent, into account because it needed to be included when calculating taxes as depreciation is a deductible business expense. From here tax was calculated and subtracted at a rate of 40% based on our Earnings Before Interest and Taxes. Then, since depreciation is a non-cash expense and we are looking for cash flows, depreciation must be added back after taxes have been considered.

This way we have a realistic view of the cash flows from the acquisition of this piece of equipment. Another item we included in our NPV calculation was the increase in net operating working capital. We included this because NOWC is a cash flow decrease as the higher levels of revenue requires higher levels of inventories and accounts receivable. It was estimated that NOWC would be equal to 10% of incremental sales revenue per year after full implementation. For the first year of implementation, 2008, the revenue was estimated to be $4,000,000.

The operation was projected to end after 2013 so we calculated terminal values for the recoverable cost of the investment net of tax ($1,800,000 x (1-. 40%) = $1,080,000) and the NOWC. Since these two cash inflows were stated to happen as soon as the project was completed, we calculated them into the NPV calculation as if they would be received in 2014, or year eight. The totals for each year’s cash inflows and outflows are present in Appendix 2. We took the NPV of the 2007 through 2014 cash flows and discounted them back to present value using the WACC.

We use the WACC because it takes into consideration both debt and equity as a source of capital. Our second analysis involved the Internal Rate of Return, or IRR. The IRR measures the discount rate that forces the NPV to equal 0, or breakeven. The IRR is expressed as a percentage and tells us that we would need a WACC of 10. 88% to break even. In this case, our WACC of 9. 87% is less than the IRR of 10. 88% so the investment is positive. Since IRR does not consider the timing of each cash flow and assumes reinvestment rate at the IRR rate, we also calculated MIRR which stands for Modified Internal Rate of Return.

The MIRR is equal to 10. 45% in this case which is greater than the WACC of 9. 87% so the investment does more than breakeven. The MIRR assumes that the finance rate and reinvestment rate are equal to WACC which is a correct assumption. The last valuation technique we used to value the addition was Profitability Index, or PI. The Profitability Index is calculated by dividing NPV by Total Investment and adding 1. We calculated PI by ($538,038/ $18,000,000) + 1. This came out to 1. 03 which indicates that the project is profitable as it is above 1.

After all calculations have been made, there are some non-numerical possible consequences to consider when looking at the future of adding the new longwood woodyard. The first possible consequence is a learning curve. There is a possibility that it will take some time for employees to learn how to use the new machinery and adapt their knowledge to efficiently using the new equipment which could defer or ultimately eliminate some revenues and efficiencies that we assumed would come with the new addition.

With the acquisition, Worldwide Paper Company is getting a lot of new inventory which may become obsolete as they adapt to the new changes. Inventory could become obsolete by being damaged while employees are getting used to the new machinery. Another possible consequence is the overestimation of the shortwood market. It may be more difficult to sell the excess capacity shortwoood than expected. Since variables of the valuation equation may not hold constant over the entire length of the project, we preformed three sensitivity projections.

The first sensitivity analysis accounts for fluctuations in the risk premium rate used to calculate WACC. Currently the risk premium is at 6%, but we performed calculations as if it decreased to 5% or increased to 7%. We discovered that if the risk premium fluctuated 1% either up or down, the project would still have a positive NPV. The calculations are present in Appendix 3. Our second sensitivity analysis involved the possible fluctuations in the bond rating. Currently, the bond rating is at an A, but we analyzed how NPV would change if the rating moved to an Aa rating with 5.

Our analysis found that if revenues decreased by either of our revenue reduction projections, NPV would be negative. The calculations for this analysis are shown in Appendix 5. In the end, we were presented with either the option to add a new on-site longwood woodyard so we would be able to eliminate having to purchase it from an outside supplier as well as sell it ourselves, or continue current operations of purchasing shortwood from Shenandoah Mill. Based on our valuation method of NPV, IRR, MIRR, and Profitability Index, we are making the recommendation to add the new on-site longwood woodyard.

The NPV calculation showed that we would be increasing shareholder wealth by $538,038. The IRR and MIRR also supported the addition decision as both rates were above the WACC meaning that the return rate on the investment was greater than the cost to take on the investment debt. Finally, the Profitability Index of 1. 03 shows us that the present value is higher than the initial investment as it is greater than 1. We are confident in our analysis and resulting recommendation to add the new on-site logwood woodyard. We believe that this investment would increase shareholder wealth. 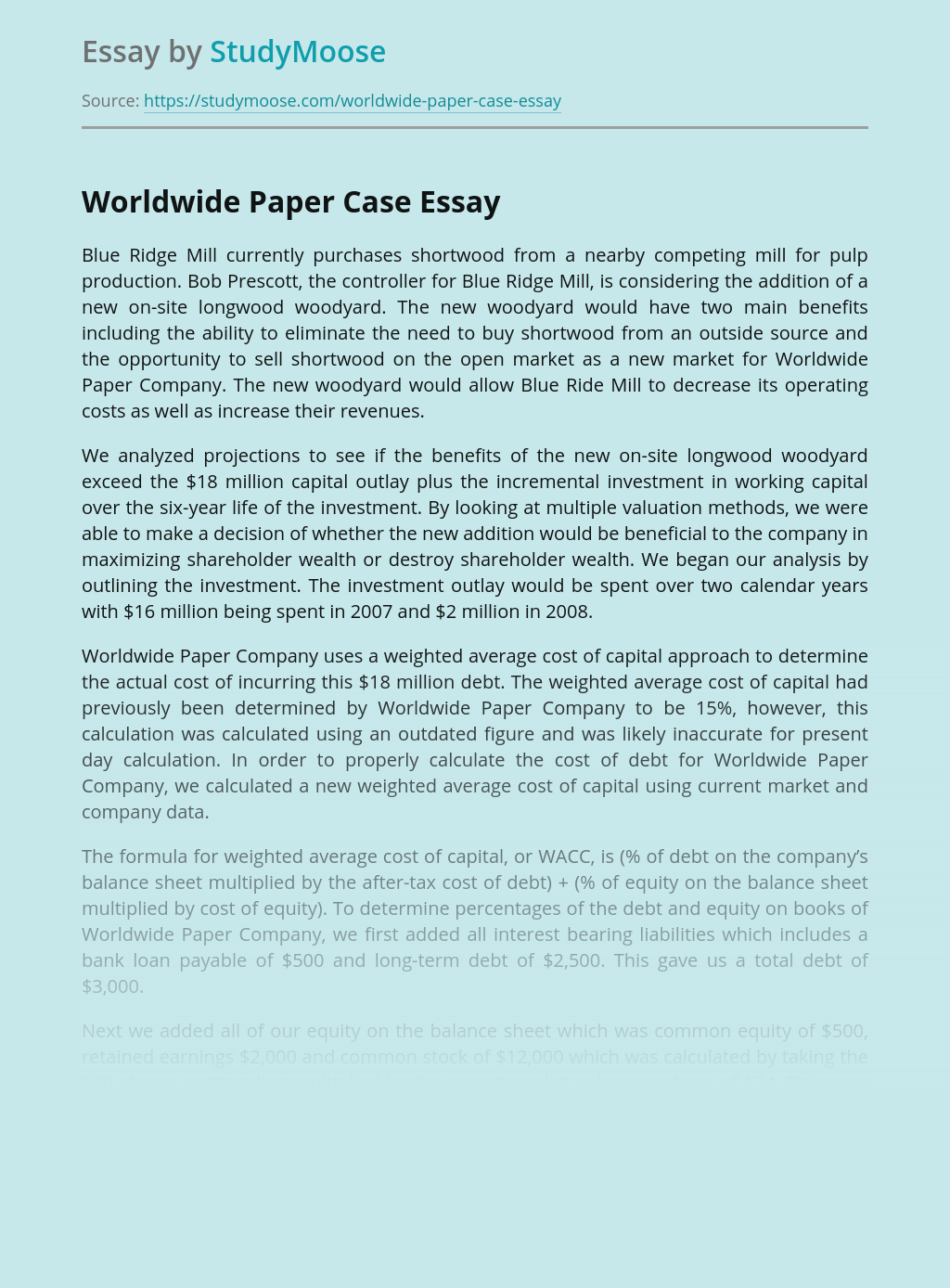 Turn in your highest-quality paper
Get a qualified writer to help you with
“ Worldwide Paper Case ”
Get high-quality paper
Helping students since 2015
Stay Safe, Stay Original