Half the Sky: Turning Oppression into Opportunity for Women Worldwide

“Half the Sky: Turning Oppression into Opportunity for Women Worldwide” is a nonfiction book by the married couple Nicholas Kristof and his wife Sheryl WuDunn that argues that the contemporary moral and economic challenge is the global oppression of women. The title ‘Half the Sky’ is used metaphorically for representing women who hold up half the sky, the other half being held by men.

Lessons from Half the Sky

Half the Sky, through a logical order of wrenching stories of the oppression of women in Asia and Africa as well as their heartening stories of triumph, not only grapple with complex issues, but it also provides an outline of solutions to the global gender inequity and oppression problems.

Don't use plagiarized sources. Get your custom essay on
“ Half the Sky: Turning Oppression into Opportunity for Women Worldwide ”
Get custom paper
NEW! smart matching with writer

The authors also do well to acknowledge both the successes as well as the shortcomings of some of the responses. From this book, it is clear that the female gender, both women and girls, are perceived as less valuable subjecting them to more neglect, violence, worse healthcare, and ultimately fewer opportunities as compared to men.

Proficient in: Half the Sky

Gender-based violence, sex trafficking, and maternal mortality have devastating impacts on women in Asia and Africa (Kristof, & WuDunn, 2010). A sad revelation from the book is that often, this oppression is only a little or completely neither recognized nor understood. The nature of journalism reporting prevents such stories from being featured in favor of other stories outside the everyday cruelties. Gender inequality is also not a top policy priority for political agendas. Misogyny and sexism are also the major perpetrators of women’s oppression, yet people discount this oppression.

The authors propose that women will only get justice once their lives are valued in the same way as a man’s life.

Women are devalued at all levels from the governmental to individual levels where men devalue women, and women devalue women as well; hence oppression cannot be solved through legislation and a change in male behavior alone. The misogynist thinking process is deeply rooted in community cultures around the world, then perpetuated by its victims. When both women and girls are marginalized, it affects not only them but also the whole society. Therefore, women’s empowerment is not just a moral cause for women but a pragmatic one for the society at large. If a global advancement in women fails, socioeconomic systems are going to fail as well, but much is to be gained with their advancement. The challenge, however, remains that for every solution presented for fixing gender inequity, flaws and failures exist in the solutions. The aid systems for oppressed women, for instance, complications affecting this system, are partly due to the issues in the developing countries that receive this aid and from the developed nations giving the aid. These aids also address basic and systematic issues, and yet the issues are often quite complicated than those giving the aid can fathom.

An example is that rescuing girls from sex trafficking is not just a matter of undoing their chains and sending them home. They have to undergo counseling for trauma, rehabilitation from drug use, and integrating them back into the society that often does not meet them joyfully. In other situations, good intentions that accompany the aid efforts are ignorant of the customs or religions of a culture, and a seemingly harmless aid could end up being scandalous like the Afghanistan case in the book. The authors condemn insensitive aid efforts but also highlight the successful aid models, which are largely based on combinations between the developing countries of Asia and Africa and the West with education at the center as the most promising solution to end women’s oppression. My personal reaction to Half the Sky is that this is not just simply a passive book, rather it is a call to action for every individual who gets to read it and the world, in general, to stand out and help to overcome and stamp out the oppression of women. Arguably, this book’s target audience was mainly a Western or developed audience, geared at influencing them to take action.

The author presents Meena’s story as an example of oppression perpetrated on women. Meena was kidnapped at nine and forced into prostitution even before she reached puberty. Initially, she refused to submit to customers and the brothel owners as punishment beat, drugged and raped her till she stopped resisting. The brothel’s disciplinarian was a fellow woman, Ainul, supporting the fact that women also oppress their fellow women. While in captivity, Meena had two babies whom she was never allowed to see often as a strategy to keep her from running away. Meena finally managed to slip away and asked the police to help her. Instead, the police mocked her. For this retribution, Meena found out that the brothel owners planned to murder her. Therefore, she fled to Forbesgunge, where Ainul’s son still traced her and allowed her to live outside the brothel on condition that she continued prostituting herself and giving her earnings to the owners of the brothel. Naina, Meena’s daughter, at 12, was raped by her first customer and forced into prostitution despite her brother, Vivek’s, protests. Vivek fled and found Meena, and after several failed attempts to recover Naina, finally, Apne Aap Women Worldwide, an aid group, helped Meena and reunited her family.

Neth, a teenager, was sold to a brothel by her female cousin, who had lied to her family that Neth will work selling fruits. The brothel then sold her to a Thai man as a virgin. The only way Neth could return home was if her freedom was bought, and Kristof, the author, buys her for $150, and now that she “belongs” to him, she is able to return home. Neth pursued her dream and opened a village store with the help of American Assistance for Cambodia, an aid group. The shop flourished and brought more competition in the village. However, the men in her family threatened by a female entrepreneur, refused to respect her, abused her shop, stole as they deemed fit before finally raiding the shop.

Woinshet Zebene, an Ethiopian girl, was raised in a culture where if a man was rejected by a woman, he could recruit friends, kidnap and rape her, ultimately obligating her to marry him. The Ethiopian law does not prosecute rapists if they married their victim. At 13, Woinshet was kidnapped from her home by a group of men, and for two days, she was raped and beaten by Aberew Jemma and his friends. After escaping from her kidnappers, her father still objected to the idea of Woinshet marrying Aberew; instead, they reported the rape as a crime. The Zebene family was urged by the village elders to settle the issue and agree to the marriage, but they still refused. Fearing prosecution, Aberew kidnapped Woinshet again to resume raping her, and when she tried to escape, he captured her and took her to court. Surprisingly, the officials presiding over the case sided with the rapist because she broke the traditions by refusing to marry her rapist

Half the Sky is an optimistic book that points out these oppressions women go through on a global scale and shows that there are solutions as well. Education for girls as an effective solution fills the chapters of this book and the societal benefits that will result from ending these oppressions

Half the Sky: Turning Oppression into Opportunity for Women Worldwide. (2021, Apr 03). Retrieved from https://studymoose.com/half-the-sky-turning-oppression-into-opportunity-for-women-worldwide-essay 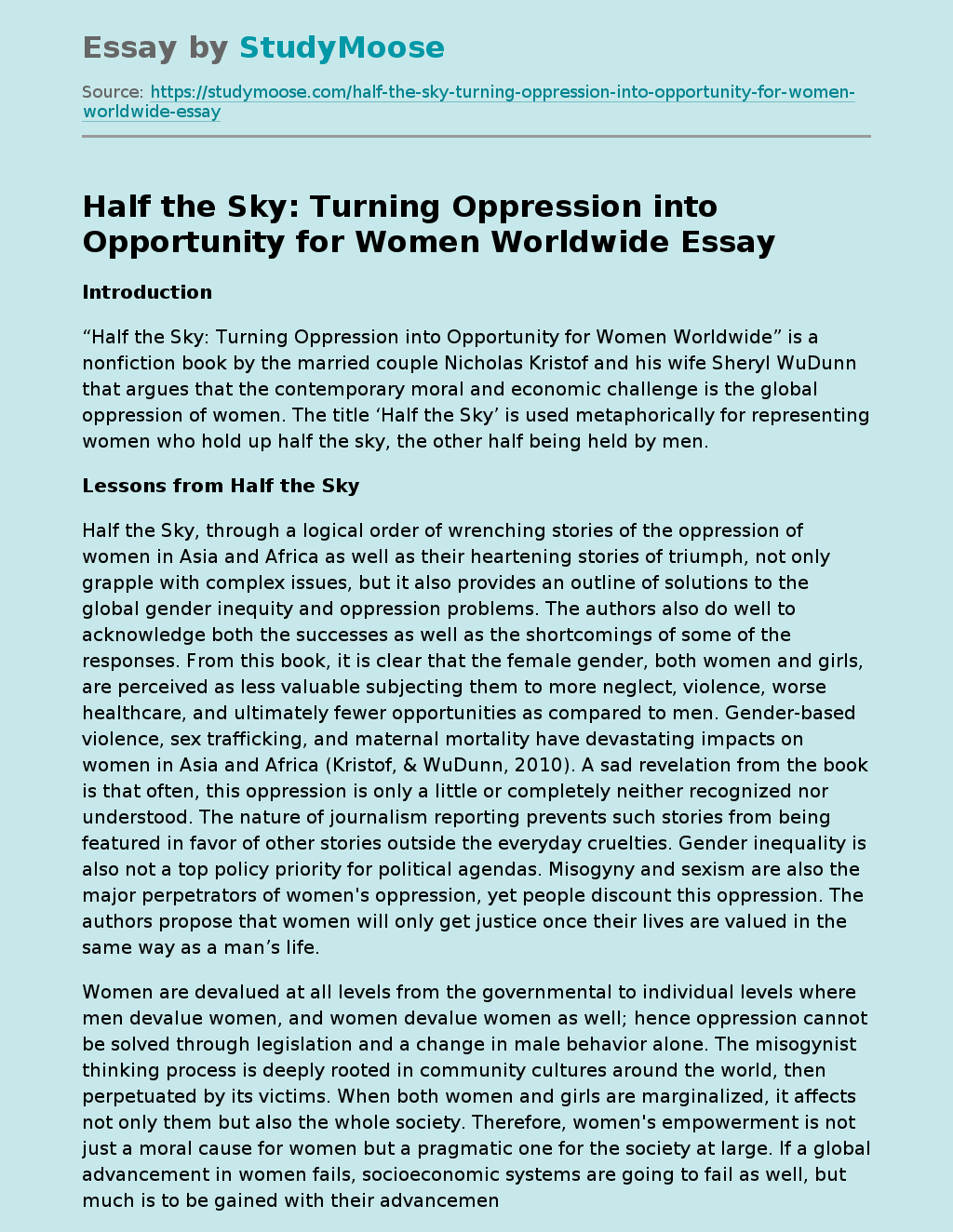