'Michael Howard's War and the Liberal Conscience is as persuasive a

‘Michael Howard’s War and the Liberal Conscience is as persuasive a book could be on the necessity of studying war.’ How far would you agree with this statement?’

Michael Howard’s War and the Liberal Conscience is a fairly persuasive book on the necessity of studying war but I believe that it resonates more with those already inclined to the study of war and peace than those who have no prior inclination to the study of war.

The book centers around the development of western liberal thought on war and its justifications.

Don't use plagiarized sources. Get your custom essay on
“ ‘Michael Howard’s War and the Liberal Conscience is as persuasive a ”
Get custom paper
NEW! smart matching with writer

It begins with Erasmus’ emotional declamation that war is barbarous and has no place in the civilised world and is ‘both unnatural and irrational’. This is presented at odds with Thomas More’s view that there were instances where war was necessary even though war was ‘a thing manifestly brutal’. This repartee is something that is repeated in every chapter. Howard builds the works of those liberal minds inclined to peace like Cruc? and Cobden, before showing how, despite their best efforts, when the methods they employ and espouse come to fruition war still occurs.

There is also twinning between those that are absolute pacifists in war- like Cobden and Paine who believed that once society is restructured and reason prevails war will end- and those who believe that war is inevitable, and in some cases just, like More and Mazzini though their belief was rooted in different causes.

This is where the persuasiveness of this book is found.

The building of each generations thinkers on peace, to the point where their respective nations and states are in a position of peace in every chapter, only for it to be torn down in the next chapter in an even bloodier set of wars, is the most persuasive element of this book for the study of war. Surely we must carry on and deepen the study of war and learn from the mistakes of these past literaries if we are ever to have lasting peace. Nowadays this is more crucial than ever with the strength of some nations militaries and issues like nuclear disarmament and humanitarian military intervention. Further, even if what you take from this book is that war is inevitable due to the constant succession of attempts at peace and their failure, the study of war is if anything even more important. If wars will continue to be fought then studying war is paramount to mitigating the damage of these wars and winning them.

However I believe that the persuasiveness of this book on those not already inclined to study war and peace is limited. In the modern age, at least in the West, war (to the layman) is something fought in a different country, often a different continent, and with increasing reliance on small professional armies, guerilla militias, paramilitaries, and proxy wars, war is not something that is on the mind of the average person beyond some basic moral deliberation when confronted with it in media. While the emphasis in the book is on the effect society as a whole has on war and thinkers responses to that I still do not think that it is persuasive enough to the layperson because it is not written to be. As a commentary on western liberal conscience it is fairly persuasive on the necessity of studying war but it is not as persuasive as a book could be.

'Michael Howard's War and the Liberal Conscience is as persuasive a. (2019, Dec 03). Retrieved from https://studymoose.com/michael-howard-s-war-and-the-liberal-conscience-is-as-persuasive-a-example-essay 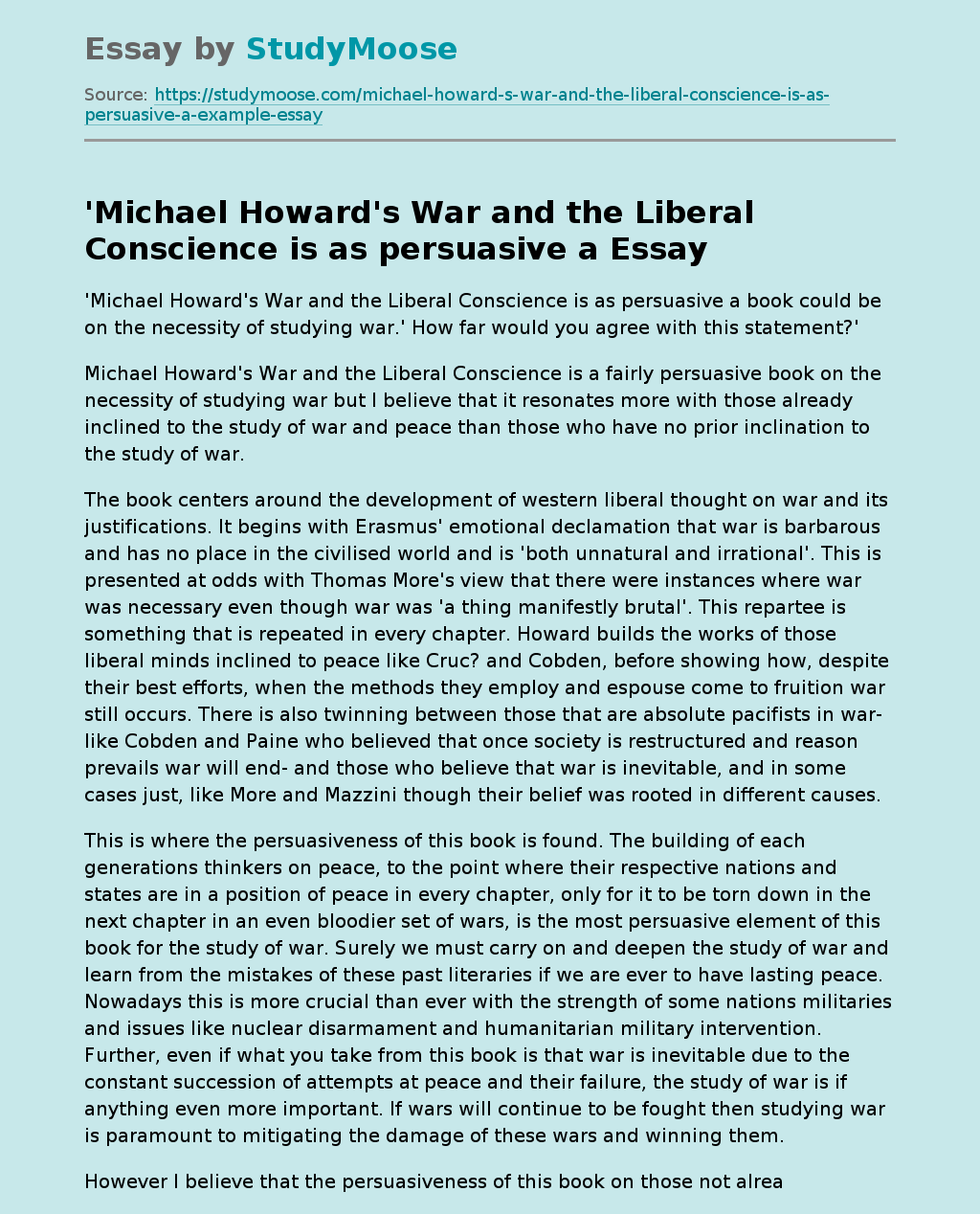