Heart and Conscience in Mark Twain’s “Adventures of Huckleberry Finn”

In the book, there are three major instances wherein there was conflict between the heart and the conscience.

Don't use plagiarized sources. Get your custom essay on
“ Heart and Conscience in Mark Twain’s “Adventures of Huckleberry Finn” ”
Get custom paper
NEW! smart matching with writer

In these situations, the conflict was caused by the issue of slavery as Huck was often forced to choose between his heart and conscience when it came to matters concerning the black slave Jim.

The first instance is found in Chapter XVI, when Huck was disturbed by his conscience about assisting Jim in his escape.  Huck was deeply bothered by the fact that while he was not responsible for the escape itself, he did not do anything to prevent it.

He was most concerned about Miss Watson, who was Jim’s owner.  Huck is guilty because he let her slave run away from her when she was nothing but nice to him.  In the beginning, it seemed like his conscience has won because he finally resolved to disclose Jim’s whereabouts.

However, he changed his mind at the last minute.  Jim called Huck his only friend and the only white man who kept his promise.  Huck said, “I was paddling off, all in a sweat to tell on him; but when he says this, it seemed to kind of take the tuck all out of me” (Twain).

Jim’s words appealed to Huck’s emotions, and the latter’s feelings prevented him from doing what his conscience told him to do.  Hence, the heart succeeds over the conscience for the first time.

The second instance again finds Huck struggling between telling others about Jim and keeping his escape a secret.  The conflict between the heart and conscience continues in Chapter XVI as Huck encounters a boat with two men in search of escaped slaves.  The men asked Huck if the man he was with was white or black.

Huck clearly wanted to expose Jim as his conscience intended him to do, but he ended up lying to hide the slave.  After the men left, Huck mused: “s’pose you’d a done right and give Jim up, would you feel better than what you do now? No, says I, I’d feel bad” (Twain).  In the end, it became obvious that Huck’s decision was a result of his feelings.  He did not choose to do the right thing because he would feel bad about it.  Again, the heart prevails over the conscience.

The third and last instance in Chapter XXXI proved to be the most significant, as Huck finally gave up listening to his conscience and resolved to follow his heart.  Because he had been bothered by conscience for awhile, Huck decided to do what he thought was right and write a letter telling Miss Watson of Jim’s whereabouts.

After he wrote the letter, Huck thought of Jim’s kindness towards him.  As he held the paper, Huck said: “I was a-trembling, because I’d got to decide, forever, betwixt two things, and I knowed it” (Twain).  In the end, Huck tore up the letter and even considered liberating Jim from slavery in the future.  Huck said, “All right, then, I’ll GO to hell!” (Twain).  The conscience dictates that it was a sin to keep a slave away from its owner.  However, Huck preferred to sin and go to hell rather than betray his friend.  Thus, the heart finally wins over the conscience.

In Mark Twain’s “Adventures of Huckleberry Finn,” there exists the conflict between the heart and the conscience.  In three instances in the story, the title character disregards his conscience by letting his emotions influence his decisions.  In the end, the heart is victorious over the conscience as Huck chose the former to dictate his actions. 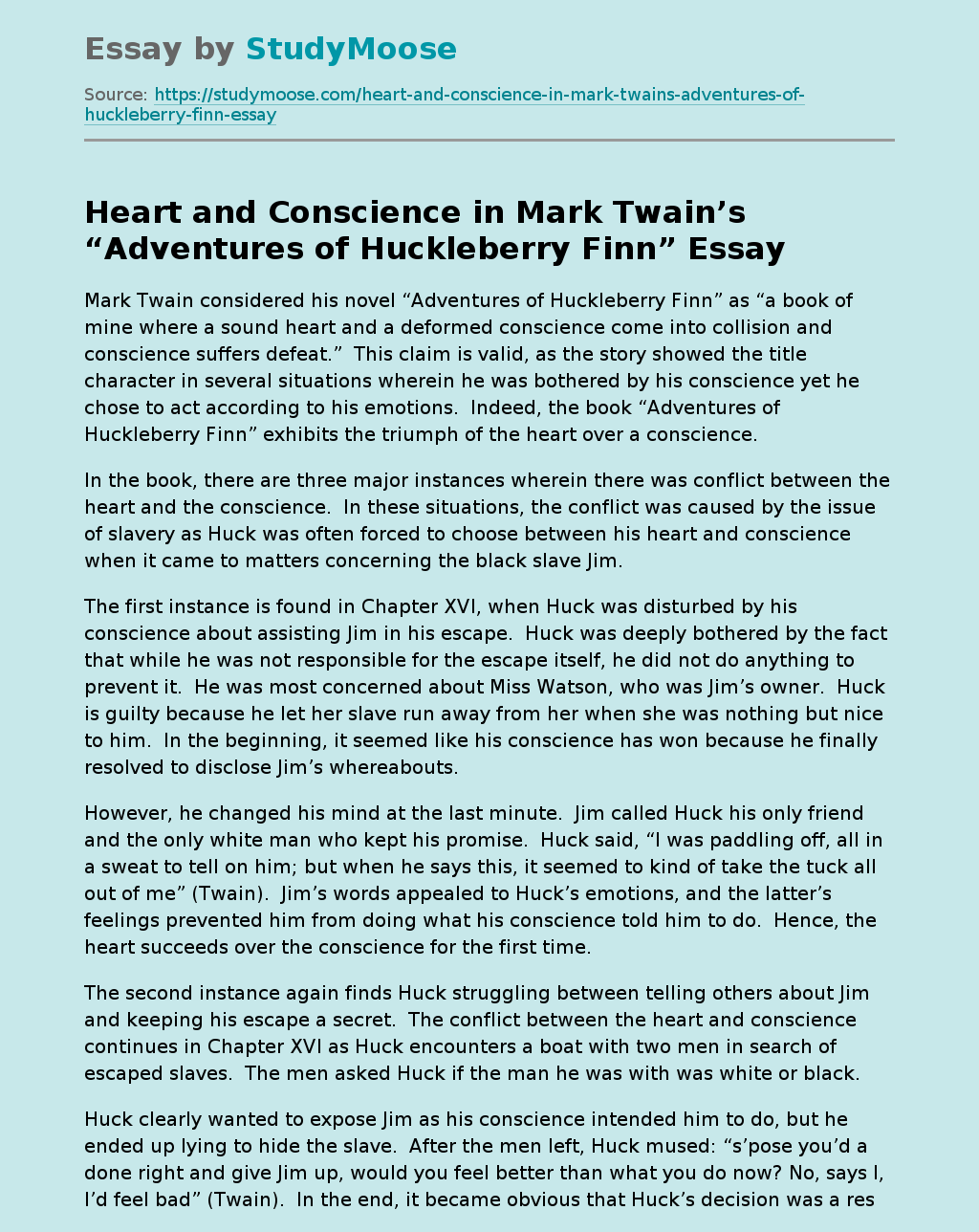