Imagery in Adventures of Huckleberry Finn

What Mark Twain is trying to portray in this part of, Adventures of Huckleberry Finn, is that Boggs is plainly looking for trouble, and Colonel Sherburn is as well. In this part of the book, Boggs comes galloping along on his horse, to town where he wants to kill Sherburn. His motto, “meat first, and spoon vittles to top off on” (107) is referring to him killing Colonel Sherburn and then eat him up in a sense of having pride that Boggs defeated someone.

Don't use plagiarized sources. Get your custom essay on
“ Imagery in Adventures of Huckleberry Finn ”
Get custom paper
NEW! smart matching with writer

When I was reading this part of the novel, I pictured Boggs as a mid-aged, really large man.

Also, the book said he had a really red face so it made me picture him getting out of breath easy. Losing his breath foreshadowed a bit to me that he was the one that was going to be defeated, being “weak”. As Boggs was trying to act strong and brave, it turned out that Sherburn was the brave one, I pictured.

Sherburn seemed like he just walked out of the store in Arkansas in a brave matter, with no care in the world after he gave that speech. Colonel Sherburn seemed sick of Boggs running his mouth, and so he shot Boggs multiple times.

The word “bang!” kept appearing in this chapter, and it showed me how Sherburn wanted to do what he thought was necessary, though he was frustrated a bit. What really caught my eye was when they were trying to keep Boggs alive, and they put a Bible over his chest and under his head.

This made sense that they thought, through their religion, that that could help Boggs out and that the Holy Spirit would bring him back to life, but unfortunately they did not. When first reading this, chills were brought to me with the smell of really fresh air and the sound of huffing and puffing as Boggs kept gasping for that sweet air.

Imagery in Adventures of Huckleberry Finn. (2016, Sep 06). Retrieved from https://studymoose.com/imagery-in-adventures-of-huckleberry-finn-essay 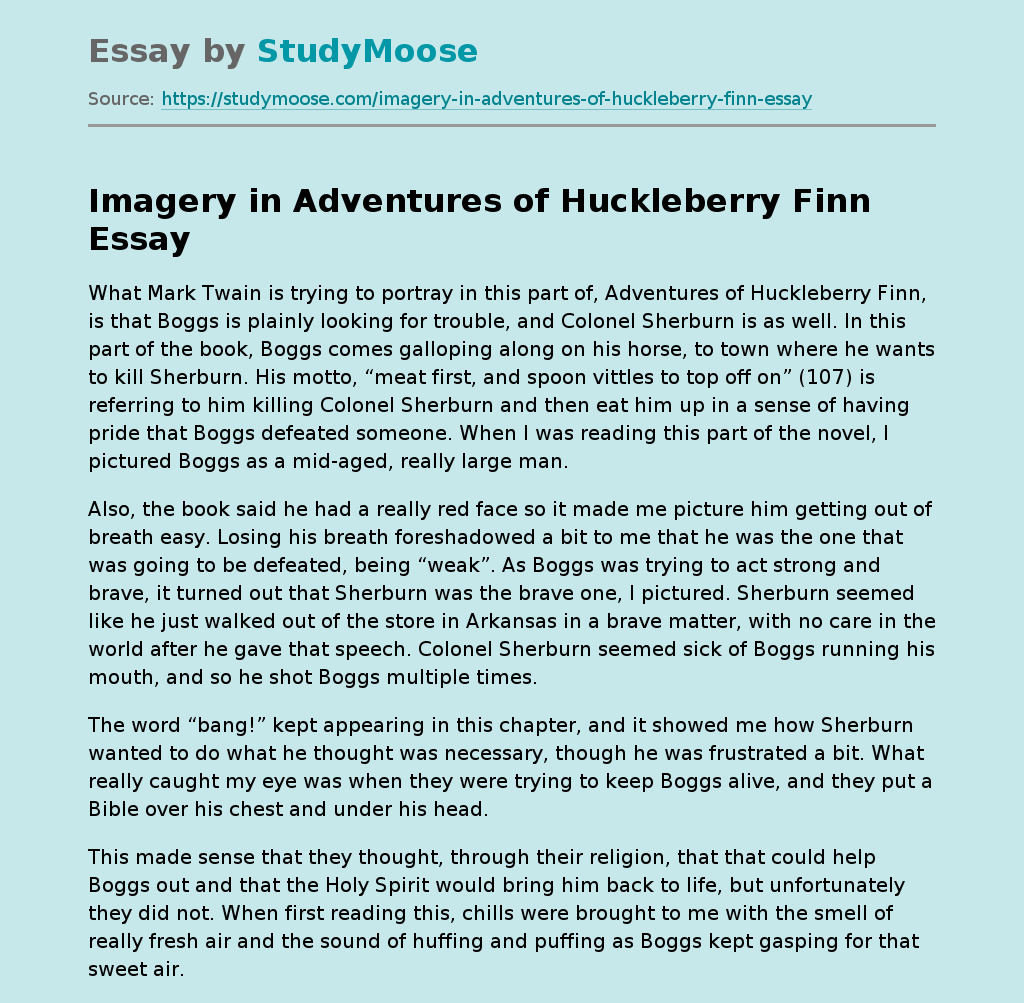