Social Satire in The Adventures of Huckleberry Finn

Satire is a genre of literature in which things such as vices, follies, abuses, and shortcomings are ridiculed with the intent of shaming individuals, and society itself, into improvement. Although satire is usually comedic, it is usually used for constructive criticism. In Mark Twain’s The Adventures of Huckleberry Finn, satire is used to point out the faults and stupidity of America and its people during the 1840s and to ridicule them in a comedic way. `In this story, Twain uses many examples to express social satire.

Don't use plagiarized sources.
Get Your Custom Essay on Social Satire in The Adventures of Huckleberry Finn Just from $13,9/Page

One of these examples is religious. Religion is a big topic in Huckleberry Finn and Twain does a good job using satire to make the story funnier and also to criticize religious following during the 1840s.

Two examples of religious satire in this story are the Grangerfords and Huck. The Grangerfords may seem like a pleasant and respectable family, who love God and attend church, but in actuality, live in a world of violence.

The family has had a hardcore feud going on with the nearby Shepherdson family for about thirty years, killing off members of each family, one by one, until all are dead.

The Grangerford family represents religious hypocrisy very clearly by attending church with their guns, placed between their knees, ready to shoot if needed. Afterwards, on their way home, the family talks about how they enjoyed the sermon (which happened to be about brotherly love) and about faith and good works. The next day, one of deadliest feuds occurred and many family members died. They may act like a religious family, but disrespect God by feuding, even in the house of God. Huck also plays a big role in the satire of religion. He does this by trying to be religious, but not understanding it at all.

An example of this is in the first chapter when Huck sees Widow Douglas “grumble a little over the victuals, though there warn’t really anything the matter with them.” Here Huck doesn’t understand what she is really doing, which is saying her mealtime prayers. Also, in chapter three, after listening to Widow Douglas’ view of heaven, Huck decides that he would rather go to the bad place than the good place. This scenario tells us that it is ok to have your own views on religion. All in all, for religion, Twain tries to teach the moral of practicing what you preach. Don’t just do it, do it with heart.

Religion isn’t the only form of social satire that Twain uses in The Adventures of Huckleberry Finn. He also uses lying as a form of satire. Lying plays a big part in the story and is used throughout the whole book. The main character, Huckleberry Finn, is the main culprit for this topic. Huck lies throughout the whole book and rarely tells the truth. He is a mastermind when it comes to lying, doing it very well without getting caught. He is constantly creating stories to get out of sticky situations and even creating fake identities to keep himself from getting caught after running away.

The Duke and Dauphin also play a large role in the topic of lying in this book. The Duke and Dauphin travel around scamming people in whatever way they can. They do this by telling major lies. They even go to the extent of pretending to be the brothers of a dead man just so they can receive money from the will! As the story moves forward, Twain displays the bad affects that lying has on people and how it can hurt others. He shows Huck grow more mature, learning that telling the truth is usually the right thing to do.

Out of all of the forms of social satire that Twain uses through The Adventures of Huckleberry Finn, slavery is the biggest topic. Slavery is represented throughout the whole novel, whether racist terms are being used or slaves are being beaten and whipped. Even though The Adventures of Huckleberry Finn was published around forty years after the story had taken place and slavery was long gone, people were still extremely racist. In the book, Twain focuses on the cruelty of slavery and how it ridiculous it was and is. An example that Twain uses to express the ridiculousness of slavery is when Jim is on the Phelps farm. After being unshackled and taken out of his room to do a job, Jim is brought back to his room and left unchained. Here he has a chance to escape but doesn’t.

Social satire is used many times to reflect the morals of certain groups and time periods, while making fun its beliefs and criticizing their flaws. The social satire used in Huck Finn was used to ridicule the flaws of the 1840s and also the flaws, such as racism, that were still strong during the 1880s, when the book was published. Throughout the story, Twain does a good job of ridiculing the flaws of those times in a funny, comedic way, and also
reflecting the morals that should be followed.

Social Satire in The Adventures of Huckleberry Finn. (2016, May 14). Retrieved from https://studymoose.com/social-satire-in-the-adventures-of-huckleberry-finn-essay 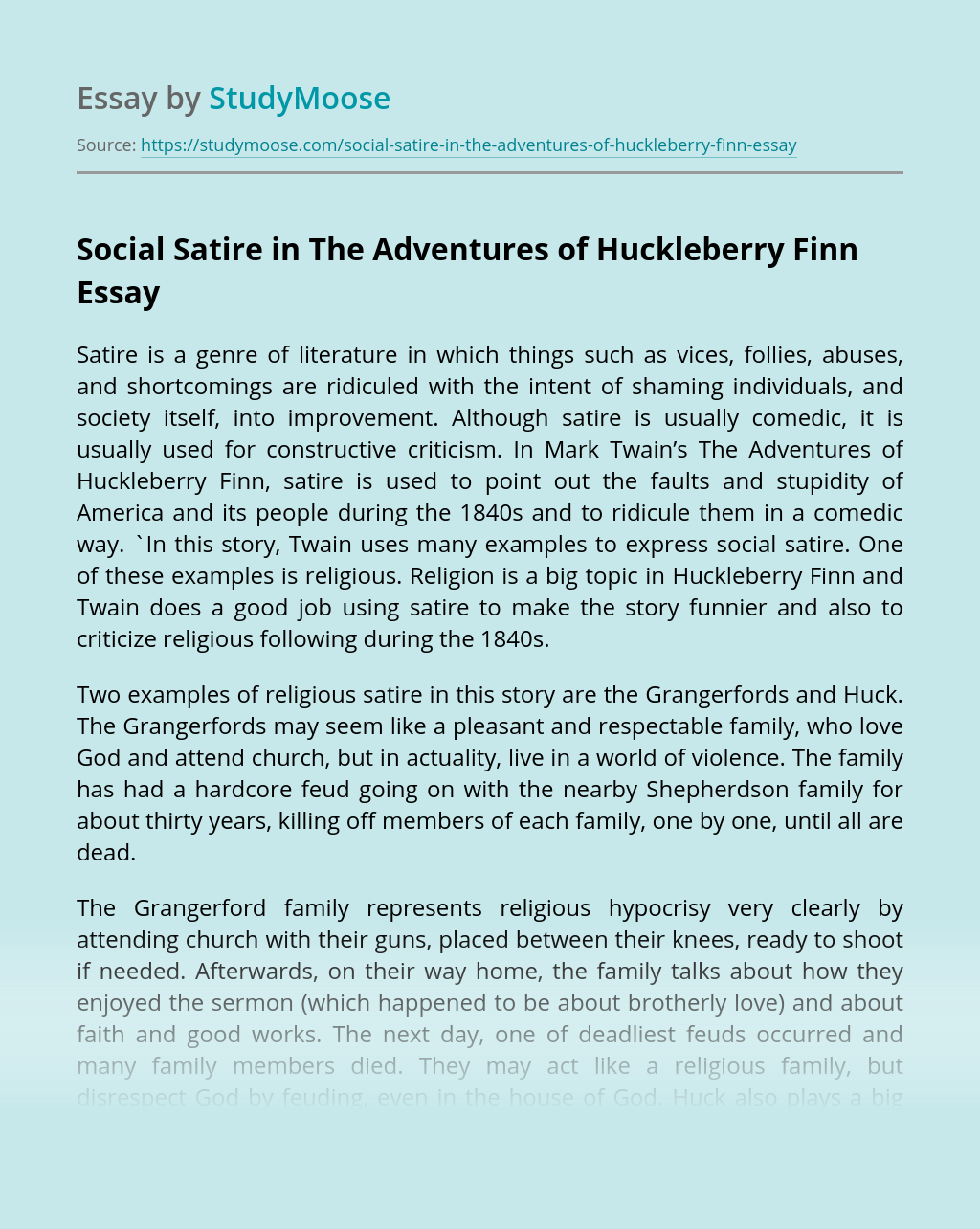 K8 the techniques and resources used at your school for developing pupils’: a reading abilities b writing skills c speaking/talking and listening abilities d mathematical knowledge, understanding and abilities The classes in my school are of blended ability and crucial phase 1 year 1 and 2 consist of pupils from 2 adjacent year groups. Throughout...

When the world first heard about the events of “Jonestown,” there were constant cries of many families pleading for their relatives. The media flooded with the over-publication of videos and images of the massacre. The whole event came as a surprise, and the willing suicide of the members came as even a larger shock. The...

Key drivers of change Technological most important aspect of Amazon’s Pestle factors: Key drivers for change: * /Internet penetration rates * Web development e-commerce * Protecting their patented software and not being imitated easily by competitors. E-commerce-Bezos understanding of e-commerce through knowledge of web users and the web that has made amazon a dominant company...

?Indian calendar is filled with lots of festivals and holidays considering different religions. Few days ago, Ganesh Festival or locally known as “Ganesh Chaturthy” was celebrated all over India and also abroad in some parts where majority of Indians are living. Originally it was celebrated by every hindu religious person by establishing a small idol...

View sample
Developing Yourself and Others

In order to carry development needs analysis on myself, I made use of customer feedback surveys that include customer complaints and compliments. This technique is representative of the entire customer opinion as KAYA Doncaster is the sole customer for which the team is contracted to. KAYA Doncaster has a procedure to ensure feedback to its...