Satirical Elements in the Adventure of Huckleberry Finn

Don't use plagiarized sources. Get your custom essay on
“ Satirical Elements in the Adventure of Huckleberry Finn ”
Get custom paper
NEW! smart matching with writer

Racist, ignorant, and cruel thoughts or individuals are called out in the novel in a humorous manner using satire. After abandoning him for a long time, Huck’s father Pap sneaks back into the house and is angry with him. Pap was wearing, “just rags, that was all. He had one ankle resting on t’other knee; the boot on that foot was busted, and two of his toes stuck through” (Twain).

“You’re educated, too, they say – can read and write. You think you’re better’n your father, now, don’t you, because he can’t? I’ll take it out of you. Who told you you might meddle with such hifalut’n foolishness, hey?

– who told you you could? ”, says Pap to Huck. This quote is ironic because most parents would be proud of their child when he or she is educated, rather than condemn them. Since the reader knows this, they understand that the previous quote was an example of irony and satire Twain used to condemn ignorant and cruel individuals.

In the same way, Twain uses satire to ridicule hypocrites, and racist ideas in the South, in places like the Mississippi River town of St. Petersburg, where the story is set. Another example of satire is when Huck promised to help Jim, an escaped slave, on his way.

Although Huck promised that he would help Jim, Huck’s conscience told him that, “people would call [him] a low-down Abolitionist and despise [him] for keeping mum” (Twain). Society teaches us that being an abolitionist is a good thing that deserves respect, but naive Huck was raised in the South, surrounded by racist beliefs telling him that being an abolitionist was a horrible thing. Twain uses the irony of Huck’s thoughts to ridicule the twisted morality of the Southern slaveholding society. Furthermore, Twain also targets the backwardness of Southern society and points out the flaws in it’s thinking throughout the novel.

Further into the novel, Twain writes about the Grangerford and Shepherdson families: two families with mutual respect, but also a violent hatred for each other, powerful enough to kill. One Sunday, both families go to the same church with “the men [carrying] their guns along, so did Buck, and kept them between their knees or stood them handy against a wall” (Twain). After listening to the preacher’s sermon, “all about brotherly love, and such-like tiresomeness; everybody said it was a good sermon, and they all talked it over going home” (Twain).

The church appears to be the only place both families can peacefully co-exist, ironically, with guns between their knees. The satire ridicules the hypocritical families, who have an ongoing murderous rivalry, yet discussed how much they enjoyed the preacher’s sermon on brotherly love. Twain’s story of the Grangerfords and Shepherdsons shows the readers the cruelty of man’s inhumanity to man, the absurdity of violence, and the hypocrisy of people who think their behavior is “honorable” or “civilized”.

Because of the warning notice from the beginning of the Adventures of Huckleberry Finn, readers are sent on a quest through Twain’s episodic and colorful story to search for a deeper meaning within the novel. Plenty of similar examples of satire and irony exist throughout the story. This satirical writing, reveals the faults and flaws of the world that still existed without directly calling out the subject of condemnation. Mark Twain’s writing revolutionized literature and has many ways to be interpreted. It is now up to you, the reader, to find it’s hidden messages.

Satirical Elements in the Adventure of Huckleberry Finn. (2016, Sep 07). Retrieved from https://studymoose.com/satirical-elements-in-the-adventure-of-huckleberry-finn-essay 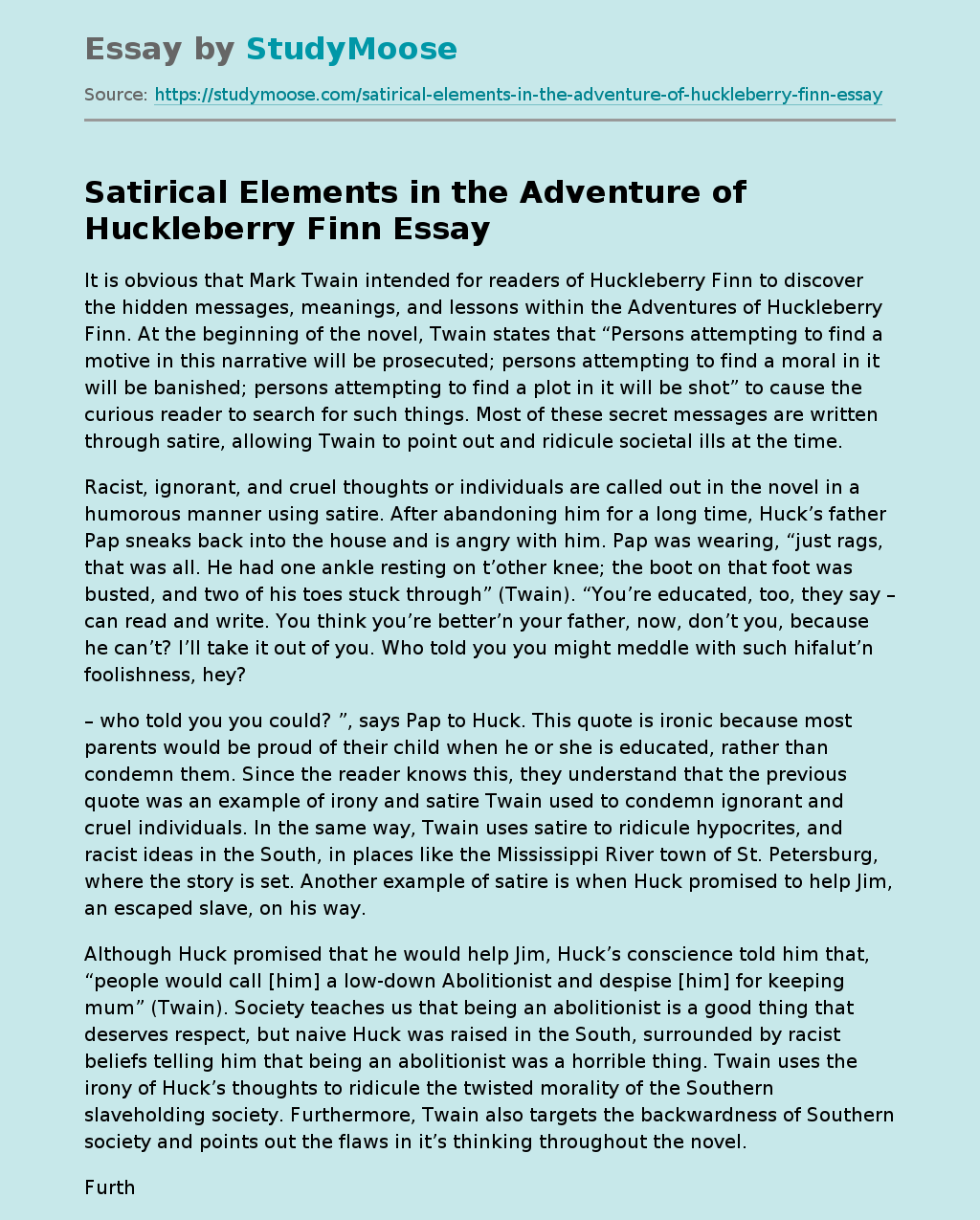