The Adventures of Tom Sawyer by Mark Twain

When writing The Adventures of Tom Sawyer (1876) Mark Twain used a number of techniques to describe the story, setting and characters such as alliteration, wordplay and onomatopoeia. Structure and symbolism is used in the novel to put together every aspect of Tom Sawyer’s life.

The novel is set in Missouri, Mississippi in the year 1849. He drew upon his personal childhood experiences and people to create the characters and events in the novel. As a realistic model for the fictional setting of the poor little village called St Petersburg he used his hometown of Hannibal.

Don't use plagiarized sources. Get your custom essay on
“ The Adventures of Tom Sawyer by Mark Twain ”
Get custom paper
NEW! smart matching with writer

Mark Twain based much of his novel on personal experience and observation and, although a fictional tale, he illustrates it with a personal manner in the way he tells the story of a boy growing up in Southern America.

Mark Twain’s main character is Tom Sawyer, a 12 year-old boy who is always playing hooky, getting into trouble and tormenting people giving little consideration to the consequences.

An orphan, he is brought up by Aunt Polly, his mother’s sister, and he constantly dreams of freedom amd a life without adults and duties.

The book is set in a time when teachers and adults were strict disciplinarians and children had none of today’s devices with which to occupy themselves. Life was simple yet harsh in the responsibilities expected of children. With his ambition of escaping this, Tom creates adventures to amuse himself and runs away to an island leading Joe and Huck with him. Friendship is given a lot of central attention in the story and is shown in the way Tom often unexpectedly reveals his emotions for his friends.

For example, 2 although Tom admires Huck for seeming so free he is saddened by the fact that no-one is there to welcome Huck home when they return from their island adventure.

However, as the story moves along, Tom realizes that he is growing up and begins to mature in his behaviour. Tom’s progress from childhood to adulthood is told in a structured and moving form. Many issues are addressed in the novel and Twain uses the mentioned techniques to convey these with as much color and varied emotion as possible.  For example, Mark Twain describes Mississippi at that time as a very troublesome and shabby place and it conveys to the reader that the author has no particular regard or respect for the town. He conveys this by using the extreme slang for the townspeople’ speech and in his descriptions of the burdens they had to carry.

By using the viewpoint of children, Twain manages to convey his opinions on freedom, which is equated with stepping outside of the norms of society and also the emotional conflicts presented by adults. From the very beginning of the book the contrasting emotions between Tom and Aunt Polly, such as discipline and indulgence, shows that adults are constantly battling the conflict between head and heart as well as duty and love. At the same time, Twain draws parallels between the adults’ and the children’s worlds implying that grown-ups are not more necessarily more mature, wiser or nicer than children based on the society they present.

The use of symbolism is significant and help to illustrate the novel’s idea and how we can understand it. Some examples can be Potter’s knife, the book ripped by Becky and the housefly which fascinates Tom in church when he should be  praying all assist in the structure. Such deep meaning in these symbols and details can only arise from the author’s own insights and observations.

It was obvious throughout the book that the author portrayed the civilized adult world through the eyes and viewpoint of children with distinct, strong and rebellious children. There is a stark contrast between how adults would view the situations in which the children found themselves.

Mark Twain touched on a wide range of subjects such as religion, education, medicine, crime, and public morality. I felt he conveyed his personal thoughts on these issues by satirizing them or using fine irony. Twain implicated much of his personal ideas about the church and society and it seems he used St Petersburg as a micrososm of America in that time representing all of the main institutions which define our roles in society.

I was influenced by this representation and found the satire applied to our present day society and institutions as well as it did when the book was written in 1876. The book made me realize that hypocrisy is an ever present yet wholly undesirable piece of adult society and I believe Mark Twain chose the perfect vehicle – children who are always what they seem – in which to convey this message.

The Adventures of Tom Sawyer by Mark Twain. (2017, Mar 08). Retrieved from http://studymoose.com/the-adventures-of-tom-sawyer-by-mark-twain-essay 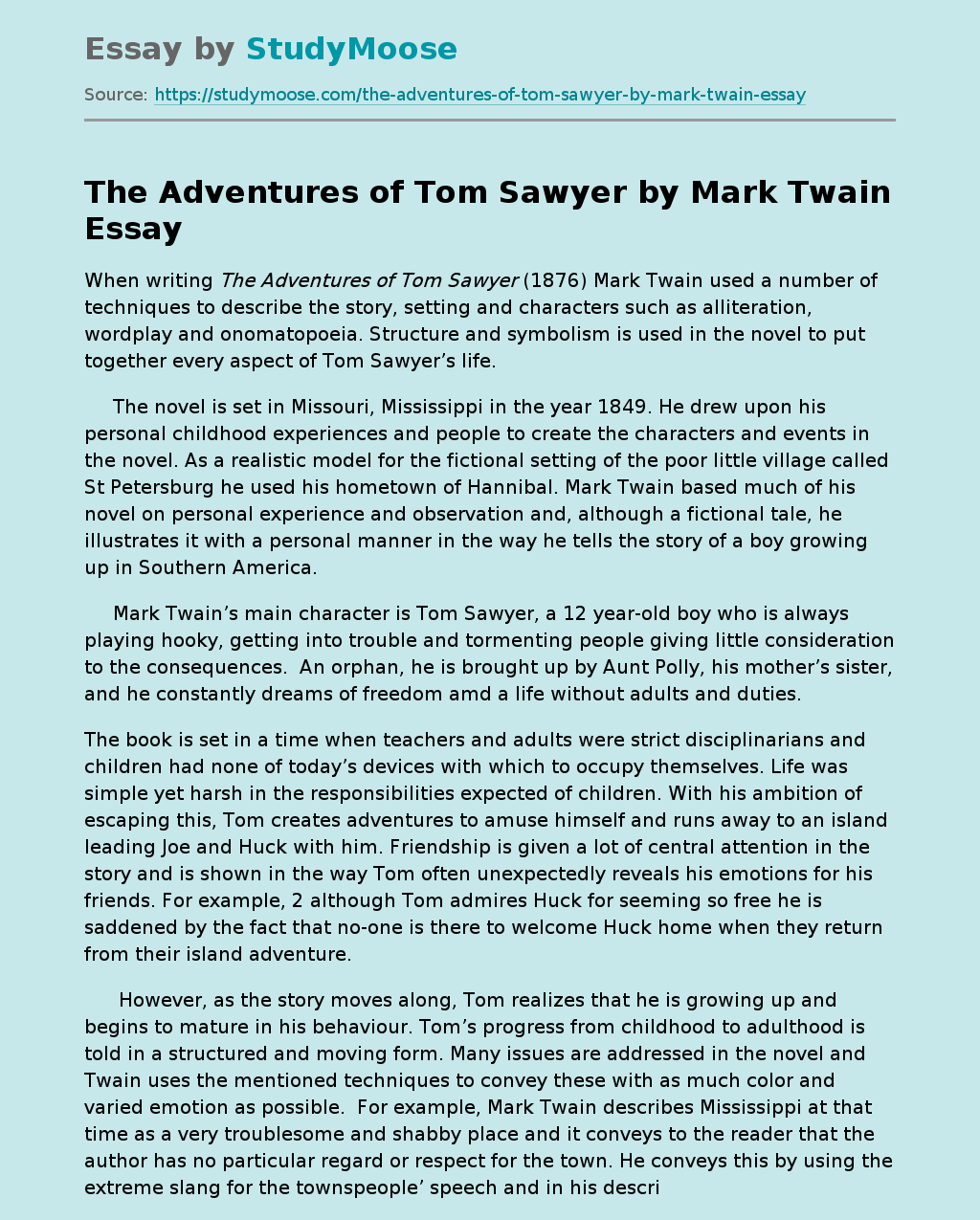