The Moral Lesson in the Adventures of Tom Sawyer

Throughout The Adventures of Tom Sawyer, Tom pushes the boundaries more than any other character. He is known as a mischievous, sweet talking, imaginative and an adventurous boy who is always eager to go exploring. Tom often tricks other boys into doing his work by cleverly twisting and tweaking the truth. Tom soon becomes fast friends with Huckleberry “Huck” Finn, an outcast and son of the town drunk. Huckleberry and Tom went on many adventures that often escalated in danger as the story progresses.

Don't use plagiarized sources. Get your custom essay on
“ The Moral Lesson in the Adventures of Tom Sawyer ”
Get custom paper
NEW! smart matching with writer

With each adventure, taken Tom learns new and valuable life lessons. Tom Sawyer learns the importance of telling the truth, bravery, and fitting into society.

Perhaps the most memorable story that took place in The Adventures of Tom Sawyer, happened after Tom skips school to go for a swim and his Aunt Polly punishes him by making him whitewash, paint, a fence. Tom is very good at manipulating others to get what he wants, and he begins talking to Ben Rogers saying “Like it? Well, I don’t see why I oughtn’t to like it.

Does a boy get a chance to whitewash a fence every day”(Twain, 17)? Tom eventually convinces Rogers to not only whitewash the fence for him but also to give him an apple. When the fence has three coats of paint on it, Tom has had many workers help him, each giving him a new treasure to take home.

Later in the story, Tom and Huck sneak into the graveyard, while there they see Injun Joe, Muff Potter and Doctor Robinson get into a fight.

Potter gets knocked out and Injun Joe kills Robinson. When Potter’s knife is found at the scene of the crime he is the assumed killer. Despite Huck and Tom promising each other not to tell anyone what they saw in the graveyard that night when the trails came, Tom takes the stand. He tells the truth of what happened that night, being careful not to mention his friend, Huck Finn. Tom’s testimony saved Muff Potter from being hung. This is a huge testament to the development of his character.

The next development in Sawyer’s character happens when he is lost in the cave with, his love, Becky Thatcher. When the realization that they are indeed lost, low on candles and almost out of food, sinks in despair takes over. They are both tired and decide to stay where they are, by a fresh source of water, to rest. Tom soon realizes that if they are to escape they cannot wait for someone to find them but instead find a way out themselves. Tom then attaches a kite line to a nearby stalagmite and goes exploring, looking for an exit. When he finds an escape, he follows his line back to Becky and reports the good news. Tom and Becky finally escape the cave due to Tom’s bravery in times of duress.

The last and most monumental lesson that Tom Sawyer learns, is the importance of becoming part of society. After Tom and Huckleberry Finn successfully went treasure hunting and found a total of 12,000 dollars. When they announced how much money they had found to the town everyone was amazed. Tom soon realizes that it is time for him and Huck to become part of society by becoming respectable figures. Tom wants to be married, mature, involved in society and he wants to do this quickly. Huck however, wants to return to his old lifestyle of doing what he wants, when he wants, so he runs away from his new home to sleep in a barrel. Tom finds Huck and realizes that the only way to appeal to Huck is convince him that by complying he can remain part of the gang. “Just as dead earnest as I’m a-sitting here. But, Huck, we can’t let into the gang if you ain’t respectable, you know”(Twain 305). Tom took colossal step in maturing at the end of this book, he went from a boy to a man.

With each adventure taken Tom learns new and valuable life lessons. Tom Sawyer learns the importance of telling the truth, bravery, and fitting into society. Before, in all of their mischief, Tom and Huck trouble causing schemes were not meant to harm anyone. They both felt guilty when things would go ary. But, now Tom is beyond the actions of the mischievous boy. He wants to enter the adult world and he wants to be responsible.

The Moral Lesson in the Adventures of Tom Sawyer. (2021, Apr 20). Retrieved from http://studymoose.com/the-moral-lesson-in-the-adventures-of-tom-sawyer-essay 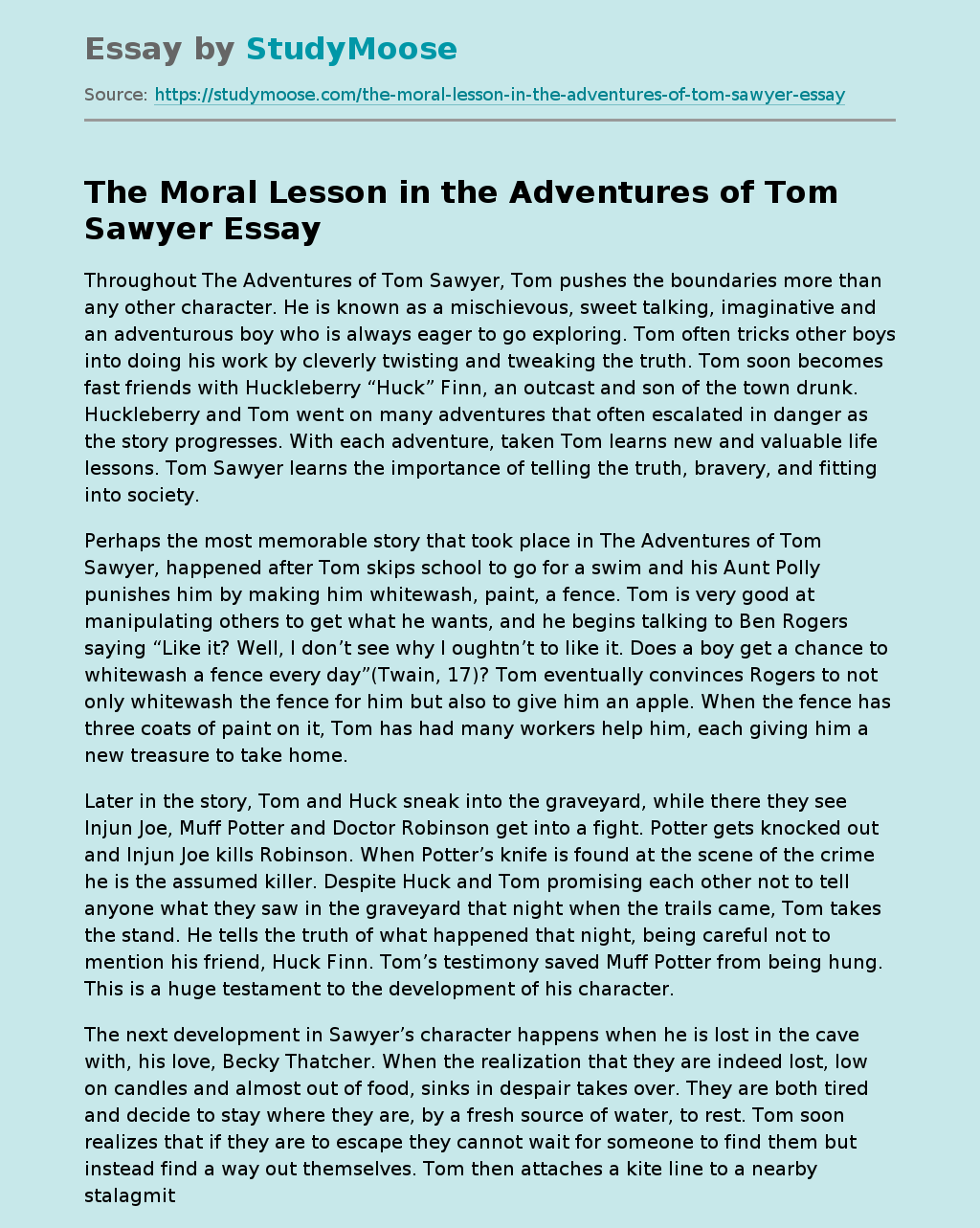