Mob Mentality in the Adventures of Huckleberry Finn

The critic Kenny Williams states that the Colonel Sherburn scene inThe Adventures of Huckleberry Finn by Mark twain, “allow[s] a brief platform for Twain to express his own contempt for mobs in an era known for such activities and lawlessness. ” This draws the attention to other scenes Twain uses to show his contempt for activities in society. In his novel Mark Twain uses characters and scenes to show his disdain for zealot faith, corrupt human nature, and blind adherence to law.

Don't use plagiarized sources. Get your custom essay on
“ Mob Mentality in the Adventures of Huckleberry Finn ”
Get custom paper
NEW! smart matching with writer

In the beginning of the novel, Mark Twain shows his disdain for the blind faith of religion through Huck’s confusion.

For example, when Huck states; “I says to myself, if a body can get anything they pray for, why don’t Deacon Winn get back the money he lost on pork? Why can’t the widow get back her silver snuffbox that was stole? Why can’t Miss Watson fat up? No, says I to myself, there ain’t nothing in it,” (14) he cannot comprehend how the answers to prayers can be selective.

Twain uses Huck to show his own opposition towards the blind faith people put in prayer, when they rarely receive what it is they are praying for.

Twain also shows his distaste for the gullibility of religious people. In chapter twenty, when the King and Huck visit a church, the King pretends that he is a pirate, who after hearing this sermon is now reformed, and will try to convince his fellow pirates to follow in his footsteps.

So the King went all through the crowd with his hat, swabbing his eyes, and blessing the people and praising them and thanking them for being so good to the poor pirates away off there;… and he was invited to stay a week; and everybody wanted him to live in their houses, and said they’d think it was an honor” (Twain 155-156). In this situation, Twain is satirizing the gullibility of religion and its haphazard impact on a mob. The people in this church are easily able to give money to pirates, who are known for being crooks and liars, inviting them to stay in their homes as an honor.

Thus, Twain shows his disdain for religious beliefs by satirizing their blind faith and gullibility. Throughout the novel, Twain shows his contempt for corrupt human nature. Although these instances are often satirized and exaggerated, the message is still the same. For instance, when the King and the Duke first start to lie about being the dead Peter Wilks’ brothers to obtain his money, Huck says, “It was enough to make a body ashamed of the human race,” (191). In this instance Twain is utilizing Huck to show his aversion to the way people lie and cheat, and how a couple of people can make a bad name for all of us.

Another example is when Jim sells the King and Duke out to the townspeople and they are carried on a pole, tarred and feathered. Although Huck, has tried to escape the King and Dukes several occasions and has witnessed the cruelties put on others and lies they tell, he does not think that they deserve similar treatment. In fact, he says, “Human beings can be awful cruel to one another,” (269). Through Huck, Twain is voicing his opposition to how people treat one another, whether they deserve it or not.

Thus Twain is using his novel to voice his enmity for the cruelty in human nature. Twain also shows his aversion to the lack of free thought in humans. The highly satirical character, Tom, is the best example of people actions being the result of other peoples thoughts. Tom often comes up with crazy plans that that follow a uniform procedure because the books he has read say so. “Why blame it all, we’ve got to do it. Don’t I tell you it’s in the books? Do you want to go to doing different from what’s in the books, and get things all muddled up? ”(12).

Even though Tom has no idea what some rules of the books are, he does them anyway, because that is what he believes he is supposed to do; and if he does not go by the book he believes things will go wrong. Through Tom, Twain shows peoples adherence to rules, because they follow the doctrine with which they were taught. In Twain’s novel Huck steals chickens from people, because his father told him it was a good deed. Even though he knows it is wrong, Huck steals because “Pap always said, take a chicken when you get a chance, because if you don’t want him yourself you can easy find someone that does, and a good deed ain’t ever forgot,” (77).

Thus Twain shows his objection of the lack of originality of thought in society in his book. Mark Twain disagreed with many things in the world, and he used The Adventures of Huckleberry Finn to voice his frustration. Although often exaggerated and satirical, through the main and secondary characters, Twain pokes fun at the gullibility of people towards religion, cruelty, and followers. In conclusion, these instances show how the mindlessness of the mob mentality is a result of the credulousness of the religious, malice of humans, and the habitues of the world.

Mob Mentality in the Adventures of Huckleberry Finn. (2016, Sep 07). Retrieved from https://studymoose.com/mob-mentality-in-the-adventures-of-huckleberry-finn-essay 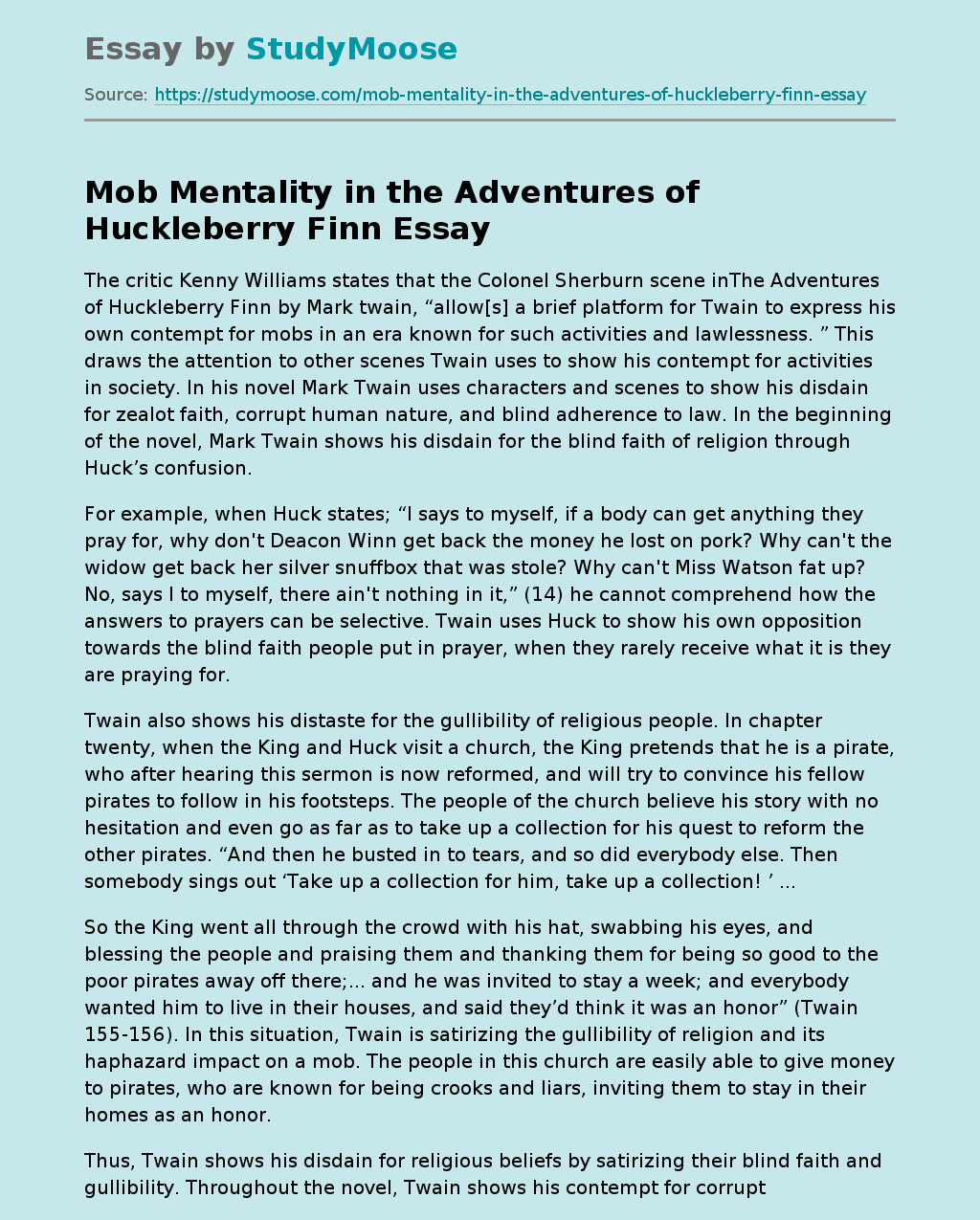