Don't use plagiarized sources. Get your custom essay on
“ Criminology Essay ”
Get custom paper
NEW! smart matching with writer

For a variety of reasons, however, none of these terms seems to me to be particularly satisfactory. For one thing, there is nothing very new about the ideas which this school espouses; nor do they have a monopoly on radical or critical views-always assuming, of course, that the terms “radical” and “critical” have any meaning left at all, in political and social discourse.

’ But the basic objection to all three terms is that they do little to clarify the character of the criminological views of the school in question: for the most part, the members of that school are (or at least claim to be) marxists.

The term “marxist”is itself not free from ambiguity, of course.

Among those who are called (or call themselves) by that name, there are many theoretical and doctrinal differences: there are also crypto-marxists, neo-marxists, and (for all I know) quasimarxists, as well as Maoists, Leninists, Trotskyites, Stalinists and so on. All too often, there is only the most tenuous relation between the views of these groups and the political and social theories of Marx himself; and as is well known those theories them1 This has already happened. Professor James Q. Wilson, in his introduction to Thomas Reppetto’s (1974) book Residential Crime writes that “there is slowly arising a ‘new criminology’ to supplant traditional criminology.”

Wilson tells us that this new criminology “considers crime from the point of view of the victim, treats particularkinds of offenses (e.g. residential burglaries,stranger-to-stranger assaults), and considers explicitly the effectiveness of alternative preventive strategies.” He adds that Reppetto’s book “is a good example of the new criminology.” In fact, about all that Reppetto’s book shares with Taylor, Walton, and Young’s book The New Criminology is that both books are printed on paper.

A Critique Marxist of Criminology selves underwent several changes during and after Marx’s life. Nonetheless, it seems appropriateto refer to the school of criminology discussed in this paper as marxist-or as marxisant,to use Douglas Hay’s felicitous term (Hay 1975a, p. 61). Several of the leading members of this school now call themselves marxists, though they did not all do so originally; and many of the main theories and concepts which they employ in their attempts to explain crime and societal reaction to crime are undoubtedly ones which are commonly imputed to Marx. (In particular,they place great emphasis on the social relations of production, and employ a concept of “class”based on those relations.)

But given the considerable doubt which still surroundsat least some of the writings of Marx and Engels (see, e.g., Hirst 1975; Singer 1979), and some reservations (to be discussed further below) about the relations between those writings and the criminological writings with which I shall be concerned, it seems best not to assume a priori that those relations are necessarily very close; hence I shall write the word “marxist” with a small vm throughout, except where reference is to Marx himself.

It is also important to note that I am not here concerned to question the cogency, coherence, or correctness of marxist social theories in general.2
Though undoubtedly important, such a task is far beyond the scope of this paper. My concern is rather with the application of those theories to criminological problems, including problems about the origins, nature, and enforcement of the criminal law. The school of criminology whose works I

shall review may be marxist;but it is also a school of criminology, though not all of those whom I shall discuss describe themselves professionally as criminologists. Why are certain acts defined as criminal? Why nonetheless do certain people commit those acts? What is done to those people, and why? It is with questions of that kind that we (and the marxist school of criminology) are concerned.

2 Or in particular, e.g., the “theory of surplus value,” according to which capitalistsexploit labor by extracting surplus value from their work in the form of profits-a theory first expounded by Marx in 1865 (Marx and Engels 1968). I cannot see any conditions under which this “theory” might turn out to be false; in any case, it appears to entail little by way of predictions about crime.

The purpose of this essay, then, is to analyze the criminological theories and claims of a group of writers, most of whom are marxistsor approach the study of crime from a marxist perspective. I begin by describing the intellectual origins of the new marxist school. I describe the central tenets which most members of this group appearto hold. I then describe some empiricalwork done by these criminologists, and related work done by historians, sociologists and other scholars, which has many affinities with marxist criminology. I offer a brief critique of some of the views of this
school, and conclude with a provisional assessmentof the impact which marxist criminology has had to date.

A caveat is in order at the outset. I think it is illuminating to compare the contemporary marxist school of criminology with the Scuola Positiva which revolutionized criminology a century ago. But the analogy may be unfair and misleadingif it is pressed too far. Contemporary marxist criminologists do not refer to themselves as a “school,” so far as I know; and they are by no means as self-consciously united in opinion as were Lombroso, Ferri, and Garofalo.3 On the contrary, they differ among themselves on a number of points, and they may well regard some of those differences as important. I shall try to document some of this diversity of opinion, even though it is mainly with areas of agreement that I shall be concerned; and wherever possible I shall cite chapter and verse from specific writers for specific views. Those views should not necessarily be imputed to anyone else.

I. Origins of the Marxist School of Criminology
In order fully to appreciate a body of social or philosophical theory, it is often helpful to begin by considering its intellectual history and the circumstances in which it arose. This is clearly so in the case of recent marxist criminology. Thus, if one were to choose a single book by which to date the birth of the contemporary marxist school, that book would undoubtedly be The New Criminology, by Ian Taylor, Paul Walton, and Jock Young, 3 There were, of course, important differences of opinion between Lombroso, Ferri, and Garofalo. For a discussionsee Mannheim (1960), especially pp. 23-29. 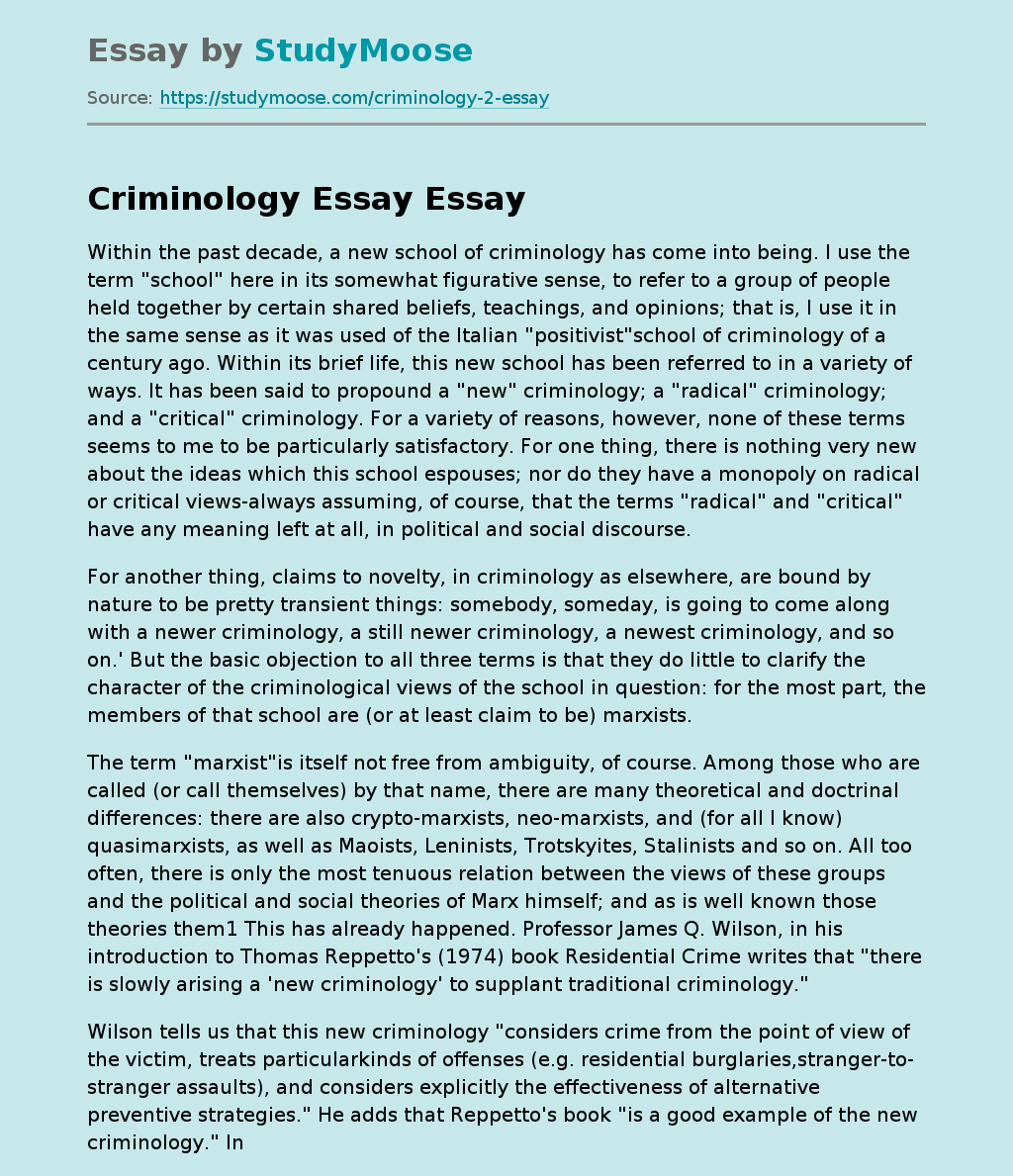