Realism was developed by the middle of the 19th century as a response to the idealistic world of romanticism which had dominated for the past half century. It was an aesthetic movement which attempted to hold up a mirror to its society to show a true reflection of reality. Although claiming to offer a slice of life by emphasizing chiefly in the importance of the ordinary amongst the middle and lower classes, realism is a relative concept, a representation of reality which adheres to a loose collection of conventions.

Don't use plagiarized sources. Get your custom essay on
“ Realism in “Great Expectations” by Charles Dickens ”
Get custom paper
NEW! smart matching with writer

Many of these are offered in Charles Dickens’ Great Expectations, which follows the life and struggles of the protagonist and narrator, Pip. Dickens uses techniques such as a chronological linear narrative, an omniscient narrator, the celebration of the ordinary, and the resolution of the enigma to drive the moral undercurrents of Pip’s everyday existence. This constructed realism is essentially a representation of reality based on Dickens ideology, offering social commentary and reflecting the values and attitudes of nineteenth century England.

The basic structure of Great Expectations follows a chronological development of Pip’s life; from his childhood innocence, to his disillusioned expectations, finally his rejection of the high life and a circular succession ending back at the beginning. This chronological structure of which Dickens narrates exemplifies Pip’s learning process through his moral and emotional turmoil and complies with the opportunity to generate a realistic setting. For example, Pip’s description of London, “a most dismal place; the skylight eccentrically patched like a broken head, and the distorted adjoining houses looking as if they had twisted themselves to peep down at me through it,” creates an archaeologically realistic description of London, and hints a sense of foreboding, foreshadowing the futility of Pip’s expectations.

This ideology developed through Pips learning process is created through a carefully crafted linear plot in order to present fiction as reality.

Reflected by the matured Pip in the perspective of the omniscient narrator, Great Expectations’ first person narration employs the wisdom of hindsight to define the events and characters of the story. Dickens imbues the voice of the matured Pip to make judgments on his past actions, at the Christmas dinner for instance, Pip experiences a deep desire to tweak Mr. Wopsle’s large nose–to “pull it until he howled.” The older Pip narrates this encounter comically and sympathetically, conveying his youthful innocence through the perspective of a child. This convention of retrospect produces a sense of psychological depth and compassion, given access to Pip’s feelings, thoughts and motivations. As the newly democratic age finds importance in the individual, essentially Great Expectations is both an external novel in Pip’s commentary of the society around him and an internal novel in the development of his perspective. By evoking consciousness of Pip’s character, Dickens coaxes the audience to enter the illusion of reality.

Furthermore, in parallel to the importance of the individual, realism tends to concern its interests in the commonplace and ordinary everyday lives among the lower classes. Through the characters of Great Expectations, Dickens celebrates the commonplace, employing Pip, the most ordinary of subjects, as a central vehicle instilled to investigate his social reality and to express ideological views on society. Biddy, for instance “was not beautiful – she was common, and could not be like Estella – but she was pleasant and wholesome and sweet-tempered.”

Despite her humble position in society Biddy emerges with admirable values, which contrasts to the cold beauty, cruelty and deception of Estella. In accordance to realist conventions concerned with rejecting the ideal, Dickens portrays the upper class with great malice, greed and corruption as Miss Havisham encourages Estella to torment Pip, whispering “Break their hearts!” Ideologically driven, realism is deliberate in rejoicing in the ordinary, and condemning the supreme.

Moreover, realism is largely concentrated on ideologically driven values as the central issues of life tend to be ethical. Dickens paints the lower class to embody a high moral ground and rejects the false values of the upper class. Drummle, for instance, is an upper-class lout, while Magwitch, a persecuted convict, has a deep inner worth. This concept is developed with greater depth in the character of Joe, of which despite his position in society, his unrefined and uneducated qualities, is identified as the epitome of goodness. As a true ‘gentleman’, “It was not because I was faithful, but because Joe was faithful,” Joe contrasts to the aspirations Pip seeks to become, of which Dickens shows as corrupt and materialistic. It was Joe’s “quiet goodness” stemming from honestly, empathy and kindness, which compelled Pip, as he reflects in retrospect, to reject the values of this society in favor of an inner morality.

Additionally, a sense of ending is invested in Great Expectations which resolves the plot. The learning process Pip embarks on educates him on the futility of his expectations, and his hopes to return as a gentleman is a complete failure: Estella reminds him coldly that she has “no heart.” In Pip’s case, closure is restored through his moral development and growth, epitomized in his reconciliation with Joe and Biddy. His maturation toward adulthood is symbolized by his desire to rectify his behaviour toward his lower class loved ones. Pip has at last learned that love, loyalty and morality hold more value than social class and wealth.

On a different vein, at times Great Expectations does not remain faithful to the conventions of realism. Dickens tends to slip in and out of reality, deviating from realism to social satire, using hyperbole to satirize the pretentiousness of Pumblechook’s social improvement “a large hard-breathing middle-aged slow man, with a mouth like a fish, dull staring eyes…looked as if he had just be all but choked.” The gothic genre is also apparent in Pip’s first description of Miss Havisham, “…ought to be white, had lost its luster, and was faded and yellow. I saw that the bride within the bridal dress had withered like the dress…Now, waxwork and skeleton seemed to have dark eyes that moved and looked at me.” The audience’s first impression of Miss Havisham is thus one of darkness, mystery and terror. With these constructed implications, realism is considered a loose convention as Dickens deviates between reality and the conventions of other genres.

It can be seen that Great Expectations exhibits aspects of realism as it assumes that reality inheres in the here and now, in the everyday. Dickens employs themes including accurate descriptions of specific setting, the chronological structure of the story, the omniscient narrator, the importance of the ordinary, the pedestrian, and the middle class with tendency to reject the ideal and the resolution of the enigma. Dickens also tends to deviate between different genres in contrast to the realistic portrayal of certain aspects in society. When these constructs are applied in literature, a set of conventions emerges, however in order to mimic reality they only offer an abstraction of reality reflecting the values and ideology of the composer’s context. With that said, literary realism is essentially a representation of the world based on the attitudes of the composer, carefully constructed to a set of conventions. 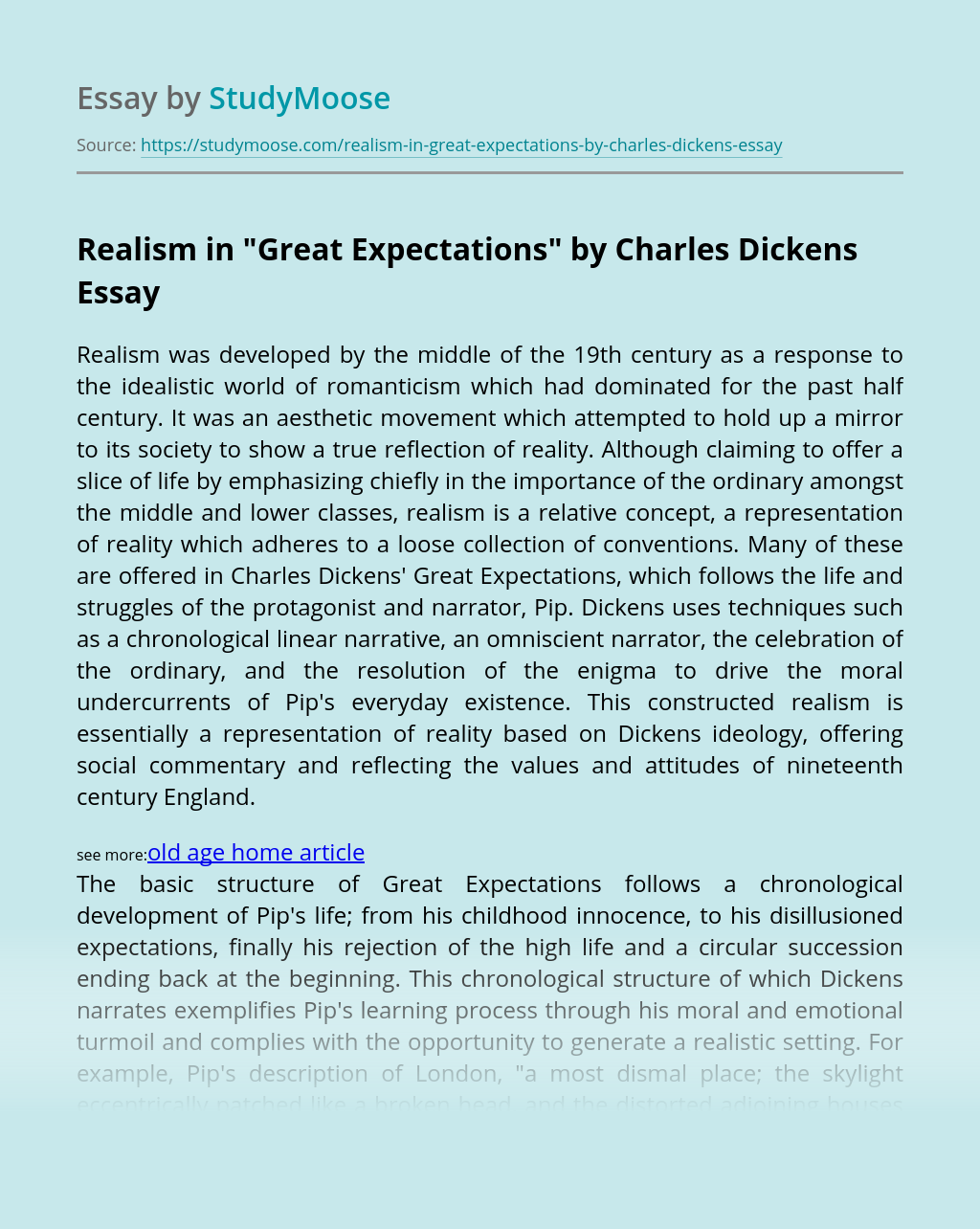