Portrayal of Family in Huckleberry Finn

Huck is a kind of natural philosopher, skeptical of social doctrines, and willing to set forth new ideas. However, when it comes to the idea of a family, Huck is ignorant in all ways. Nevertheless, Huck’s adventures throughout the novel present him with opportunities to gain the family that he has secretly wanted all his life because of his lack of compassion from his remaining family. This new discovery to a family begins with Tom Sawyer. Tom Sawyer initiated himself as the decision-maker, with Huck listeing without argument, much like a big brother little brother relationship.

Don't use plagiarized sources. Get your custom essay on
“ Portrayal of Family in Huckleberry Finn ”
Get custom paper
NEW! smart matching with writer

In the first few chapters of the book, Huck Finn and Tom Sawyer are established as foils for each other-characters whose actions and traits contrast each other in a way that gives readers a better understanding of both characters. Due to these contrasts, Tom has established himself as Huck’s older brother. Later on in the book, Huck comes across the Grangerford family. The Grangerford family is a tragic family in a huge predicament similar to Romeo and Juliet.

Huck finds himself attached to the family in a way. “Everybody loved to have him (Col.

Grangerford) around, too; he was sunshine most always-I mean he made it seem like good weather. ” Huck cries over Buck’s body because Huck has begun to think of Buck as a friend as well as a brother. Huck finds the feud that the Gangerford’s have with the Shepherdson’s unnecessary and harmful, and believes it will only bring hurt and loss to both sides, which it inevitably does.

The future losses, which are inescapable hurt Huck because he feels connected to each family member in a different way, even the dead sister, Emmeline.

Throughout all these situations that Huck goes through, Jim has supported him, even when Jim was not with Huck at every time. Jim first met up with Huck on the island. Jim escaped Widow Douglas’s home because he was to be sold down south, which would separate Jim from his family forever. Jim is hands down the most important person to Huck throughout the novel, putting himself in a category as one of Huck’s new family members. Jim has been associated as Huck’s father figure. During their time together, Jim and Huck make up a sort of alternative family in an alternative place, apart from society.

Huck escaped from society for adventure and a new life, while Jim has escaped from society so that he wouldn’t be separated from his family by being sold down south. Jim is based off of his love, whether it’s for his family or his growing love for Huck. Jim was thought of by Huck as a stupid, ignorant slave in the beginning of the novel, but as Huck spends more time with Jim, Huck realizes that Jim has a different kind of knowledge based off of his years as well as his experiences with love. In the incidents of the floating house and Jim’s snakebite, Jim uses his knowledge to benefit both of them but also seeks to protect Huck.

Jim is less imprisoned by conventional wisdom than Huck, who has grown up at least partly in mainstream white society. Jim proves his humanity to Huck by baring himself emotionally to Huck, expressing a longing for his family and his guilt when Jim mentions the time he beat his daughter when she did not deserve it. Nevertheless, throughout their time together, Huck has still had the idea of turning Jim in. Huck searches the social and religious belief systems that white society has taught him for a way out of his predicament about turning Jim in.

In the end, Huck is unable to pray because he cannot truly believe in these systems, for he cares too much about Jim to deny Jim’s existence and humanity. “It was a close place. I took . . . up (the letter I’d written to Miss Watson), and held it in my hand. I was a-trembling, because I’d got to decide, forever, betwixt two things, and I knowed it. I studied a minute, sort of holding my breath, and then says to myself: “All right then, I’ll go to hell”—and tore it up. It was awful thoughts and awful words, but they was said.

And I let them stay said; and never thought no more about reforming”. The logical consequences of Huck’s action as well as Huck’s growing affection for Jim, rather than the lessons society has taught him, drive Huck to tear up the letter. Though he does not admit this truth to himself, Huck trades his fate for Jim’s and as a result, accepts the life of a black man as equal to is own. By helping the doctor treat Tom after Tom was shot in the leg as well as shielding Huck from seeing his father’s corpse, Jim affirms that he is not only a decent human being, but also a model father.

Huck’s feelings about society and the adult world are based on his negative experience, the main one being Huck’s drunk abusive father, “Pap”. “Paphe hadn’t been seen for more than a year, and that was comfortable for me; I didn’t want to see him no more”. Although Huck was free from his father for a long time, the new judge in town returns Huck to Pap because he privileges Pap’s “rights” over Huck’s welfare, much like the relationship between a slave and a master. The judge fails to take into account Pap’s drunkenness and abusive past, which puts Huck in a sizable predicament.

Because of Pap’s abusive nature and drunkenness, Pap fails Huck in providing Huck with a set of beliefs and values that are consistent and satisfying to Huck, making Pap fail as a father figure in another way. Although Pap is a hideous, hateful man in nearly every aspect, Huck does not immediately abandon him when given the chance. Huck is grasping on the final thread he has of family. Huck truly believes in the sense of family, and desperately wants it, but at the same time, is scared by the idea (won’t let Widow Douglas close).

By placing hope in the wrong person (Pap), Huck misses out on the possibility of a good family with Widow Douglas. As apposed to Jim, who represents the best of white society even though he is black, Pap represents the worst of white society: he is illiterate, ignorant, violent, and profoundly racist. Though to a very small degree, Huck has been led to believe the same. Pap represents the true evil in the book, making Huck’s belief in a family cynical and saddened. Through Huck’s adventures on the Mississippi River, he has created new homes for himself at the locations of his new family members as well as comfort zones for Huck.

Huck and Jim, both alienated from society in fundamental ways, first find home on the island where they meet up. The island provides a pastoral, dreamlike setting: a safe peaceful place where food is abundant. Through two incidents on the island (the floating house and Jim’s snake bit), Huck and Jim are reminded that no location is safe for them. Because of this Jim and Huck leave on a raft as an escape from both being caught, as well as civilization and society as well. “We said there warn’t no home like a raft, after all.

Other places do seem so cramped up and smothery, but a raft don’t. You feel mighty free and easy and comfortable on a raft. ” Huck and Jim’s raft becomes a sort of haven of brotherhood, equality, and growing affection, as both find refuge and peace from a society that has treated them badly. Compared to the outrageous incidents onshore, the raft represents a retreat from the outside world, the site of simple pleasures and good companionship. Huck and Jim do not have to answer to anyone on the raft, and it represents a kind of utopian life for them.

They try to maintain this idyllic separation from society and its problems, but as the raft makes its way southward, unsavory influences from onshore repeatedly invade the world of the raft. In a sense, Twain’s portrayal of life on the raft and the river is a romantic one, but tempered by the realistic knowledge that the evils and problems of the world are inescapable. Through different events, Huck ends up at the Phelps’s’ house. Although the reason Huck goes to the Phelps’s’ house in the first place is to find Jim, he still finds a sense of home there.

When caught creeping around the house, Huck was caught. Aunt Sally came out, mistaking him for her nephew, who is inevitably Tom Sawyer. Huck pretends to be his best friend Tom so that he could find a way to help Jim as well as stay out of trouble. Although Aunt Sally thinks Huck is Tom, she still gives off that motherly vibe, even after Huck mentions his deception. After the final escape, the Phelp’s house seems to come to even more life then it was before. Aunt Sally smothers the boys, Aunt Polly scolds, and everyone bumbles along

Ultimately, readers are left questioning the meaning of what we has been read: perhaps Twain means the novel as a reminder that life is ultimately a matter of imperfect information and ambiguous situations, and that the best one can do is to follow one’s head and heart. Perhaps Twain means also to say that black Americans may be free in a technical sense, but that they remain chained by a society that refuses to acknowledge their rightful and equal standing as individuals. Unfortunately, these questions seldom have straightforward answers, and thus the ending of the novel contains as many new problems as solutions.

Portrayal of Family in Huckleberry Finn. (2018, Jun 30). Retrieved from http://studymoose.com/portrayal-of-family-in-huckleberry-finn-essay 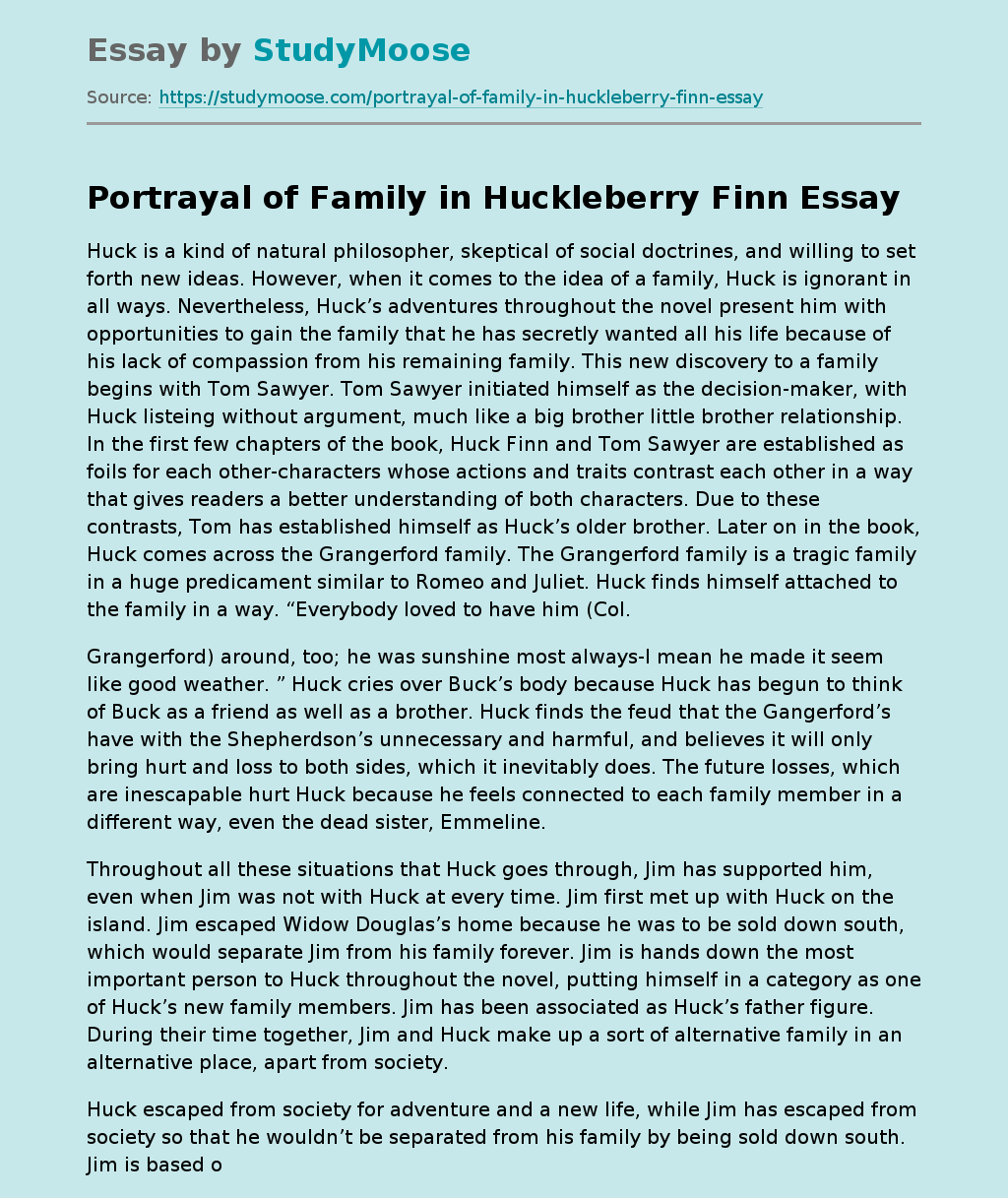