The relationship between Huckleberry Finn

The relationship between Huckleberry Finn and Jim are central to Mark Twain’s “The Adventures of Huckleberry Finn”. Huck’s relationships with individual characters are unique in their own way; however, his relationship with Jim is one that is ever changing and sincere. As a poor, uneducated boy, Huck distrusts the morals and intentions of the society that treats him as an outcast and fails to protect him from abuse. The uneasiness about society, and his growing relationship with Jim, leads Huck to question many of the teachings that he has received, especially concerning race and slavery.

Twain makes it evident that Huck is a young boy who comes from the lowest levels of white society. Huck’s father, Pap, is a drunk who disappears for months on end, and yet the new judge allows Pap to keep custody of Huck. The judge privileges Pap with the right to his son because he is his natural father. “Pap shows[s] noisomely the meanest qualities of his class: superstitious, alcoholic, and shiftless” (Budd 473).

Pap is a good example of the imbalanced perceptions of race and thoughts of that particular race can be. The community has failed to protect him.

Huck’s distance from society makes him question and become skeptical of the world around him and the ideas it passes on to him. Huck often knows better than the adults around him, even though he is missing the assistance that a suitable family and community can present to him. Huck’s distrust of the society that surrounds him becomes increasingly clear as he travels down the river with Jim.

He is able to view society for the first time in actuality. Due to the fact that, Huck is a compassionate young boy, he battles racism and the hypocrisy of society through his relationship with Jim.

Huck Finn represents the greatest capability that man encompasses, and that is turning into a sensitive, deliberating person rather than a complete product of society. Huck remains accepting of new ideas, and he refuses to completely accept the assumptions that the people around him comprise. Even though Widow Douglas considers Huck as a lost child; he acknowledges the idea that she has his best interest at heart. Huck’s intelligence, willingness, and his ability to think through a situation lead him to certain conclusions that are correct, but would appall the white society that surrounds him.

Huck and Jim’s relationship begins with the incident in the Widow’s garden. Tom wants to tie Jim up, but Huck objects. Huck is consistently dealing with moral dilemmas; he does not want to tie Jim up even though Tom does. When Huck is in the presence of Tom it becomes extremely difficult for Huck to stay true to his morals and ideals because he is still just a young boy, and becomes vulnerable to people who are of his age. Unlike his relationship with Jim, Huck does not feel the comfort that he feels when he is in the presence of Jim.

He is witnessing the spoils of society, Jim belongs to Widow Douglas, and yet he believes that deep down Widow is a woman who has good intentions. Huck has come to terms with the fact that it takes a strong person not to fall so easily into prejudices and assumptions. He views Widow Douglas as a person who is just blinded by nature. Huck is surrounded with people around him who are consistently making him to put thought into his views about certain aspects of the society that he resides in.

When Jim is captured Huck’s mind is flooded with thoughts of Jim which cause him to give into his conscience, and decides to help Jim. Huck goes with the most powerful motivation to set Jim free no matter what the cost may be for him. “Huck’s final decision to help Jim escape represents Huck’s belief in and affirmation of Jim’s humanity” (Mason 36). Huck has not only come to the realization that Jim is a real person, but that they have developed a very unique relationship.

“[Huck’s decision to ‘go to hell’ for Jim is but an indication that racial prejudice was slowly becoming psychically insupportable” (Kaye, 39). This realization of Jim is one that Huck straightforwardly accepts because of the way he is easily accepting of ideas, and thoughts. Huck not only realizes that Jim is a human being, but he also comes to terms with the fact that Jim is a good person, and has an extremely good heart. Jim, who becomes Huck’s friend as he travels down the Mississippi river, is a man of intelligence and consideration.

“An understanding of Jim’s character is by no means a simple matter; he is a highly complex and original creation, although he appears at first sight very simple” (Hansen, 388). Jim has one of the few well functioning families in the novel. Although he has been estranged from his wife and children, he misses them dreadfully, and it is only the thought of a lasting separation from them that motivates his unlawful act of running away from Miss Watson. Jim is rational about his situation and must find ways of accomplishing his goals without provoking the fury of those who could turn him in.

Regardless of the restrictions and constant fear Jim possesses he consistently acts as a gracious human being and a devoted friend. In fact, Jim could be described as the only existent adult in the novel, and the only one who provides an encouraging, decent example for Huck to follow. The people that surround Huck who are supposed to be teaching him of morals, and not to fall into the down falls of society are the exact people who need to be taught the lessons of life by Jim. Jim conveys an honesty that makes the dissimilarity between him and the characters around him evident.

Jim expresses a yearning for his family and admitting his imperfections as a father when he reminisces of the time he hit his little girl for something she could not help. “Huck’s reaction to Jim’s feelings for his family is worth noticing. ‘I do believe he cared just as much for his people as white folks does for their’n,’ says Huck. ‘It don’t seem natural, but I reckon it’s so. ‘ ‘It don’t seem natural. ‘ As on so many other occasions, Huck is more [correct] than he knows, since, at the level, Jim’s feelings are anything but natural; they are [extremely conventional]” (Hansen 390).

Jim is comes to the realization of how indecent he was towards his daughter just shows how capable he is as a human being to admit his inaccuracy, and be grateful for his family. Jim accomplishes this task effortlessly because he innately cares for his family the way every father should. Jim makes sure that he shelters Huck from some of the ghastly terrors that they come across, including the corpse of Pap. Jim shows his honorable nature by keeping Huck from experiencing a horrendous sight, his father’s dead body. The definitive symbol of freedom for Huck and Jim is the Mississippi river.

Much like the river, Huck and Jim’s relationship is ever changing. For Jim the river represents his escape from the society that has him captured and enslaved, and for Huck the river is freedom from the society that causes him to question his morals. However, they both soon become conscious of the fact that they are not completely free from the very issues that they have so eagerly escaped. The trials and tribulations of coping with the issues of a white society haunt Huck and Jim from the beginning of their journey to the end.

Even though the duke and the dauphin are the representation of the unpleasant society that exists they are on of the causes of a union of two people that come from very different sides. It takes the power of isolation from society for Huck and Jim to truly grasp the epiphanies they have about one another as well as the people in their lives.

They are able to view their circumstances in a manner in which is difficult when they are on land and have to cope with the influences of society. The coping of their Huck and Jim’s individual situations is what was causing so much of the uneasiness they felt in their lives.

The river is in constant motion which is identical to the state of Huck and Jim’s relationship. It is only through this consistent motion that they can both come to terms with their thoughts. They are so effortlessly honest with their thoughts and this is simply due to the comfort that they provide one another. Huck and Jim’s survival of the long journey they had to endure just represents the fact that the impossible can be overcome. As one can see, “[at] the heart of Huckleberry Finn lies a story about real human figures with genuine moral and ethical problems and decisions [especially Hick and Jim]” (Lauriat 441).

Huck and Jim’s battle of the hypocrisy of society is the very obstacle that causes them to develop a relationship. Even though the time that Mark Twain wrote the Adventures of Huckleberry Finn slavery was abolished, and yet the essence of that dreadful time still existed. Jim’s extremely noble nature shines even more when he is under the full control of white society. Through Jim is Huck able to read his surroundings and view society in actuality. This is one of the reasons he was so easily influenced by Tom. The fact that Huck is so young just conveys his true nature as a person.

Huck possesses a resilient sense of character to accomplish a monumental task of not being blinded by the assumptions and ignorance of his surroundings. Through this blindness is one actually vulnerable in holding biases, prejudices, and assumptions their own. Even though Huck is accepting of the mistreatment he receives from society he does not fall into their trap of ignorance.

The more Huck distrusts society he increasingly views Jim as a regular human being who encompasses qualities that should be contained within all people. Jim is a man who has incredible amount of concern for his family, and view’s Huck as a good friend of his.

Jim is vulnerable to his desires of wanting to have the people he cares about happy and safe. Jim has the capability of understanding, and wanting to protect Huck. Jim is the only one who can truly view Huck for the person that he is, and that is why Jim is protective of Huck without imposing on him, and that is why it is viewed as honest and without expectation.

This is the type of influence that is needed in Huck’s life, and yet has absent for quite some time. Huck and Jim’s journey on the Mississippi river is an adventure that caused them to view the most important aspects of their lives for the first time.

The distance that they endured from the land, or society, caused them to be a lot more accepting of each other. Through this process of realization did Huck and Jim’s vulnerabilities surface which intern caused both Huck and Jim to develop such a strong and everlasting relationship. Huck and Jim’s relationship is one that should be treasured for its innocence as well as the strength of its growth. Through Huck and Jim’s journey together the true essence of who they are individually, and who they become together can truly be seen.

The relationship between Huckleberry Finn. (2016, Sep 07). Retrieved from http://studymoose.com/the-relationship-between-huckleberry-finn-essay 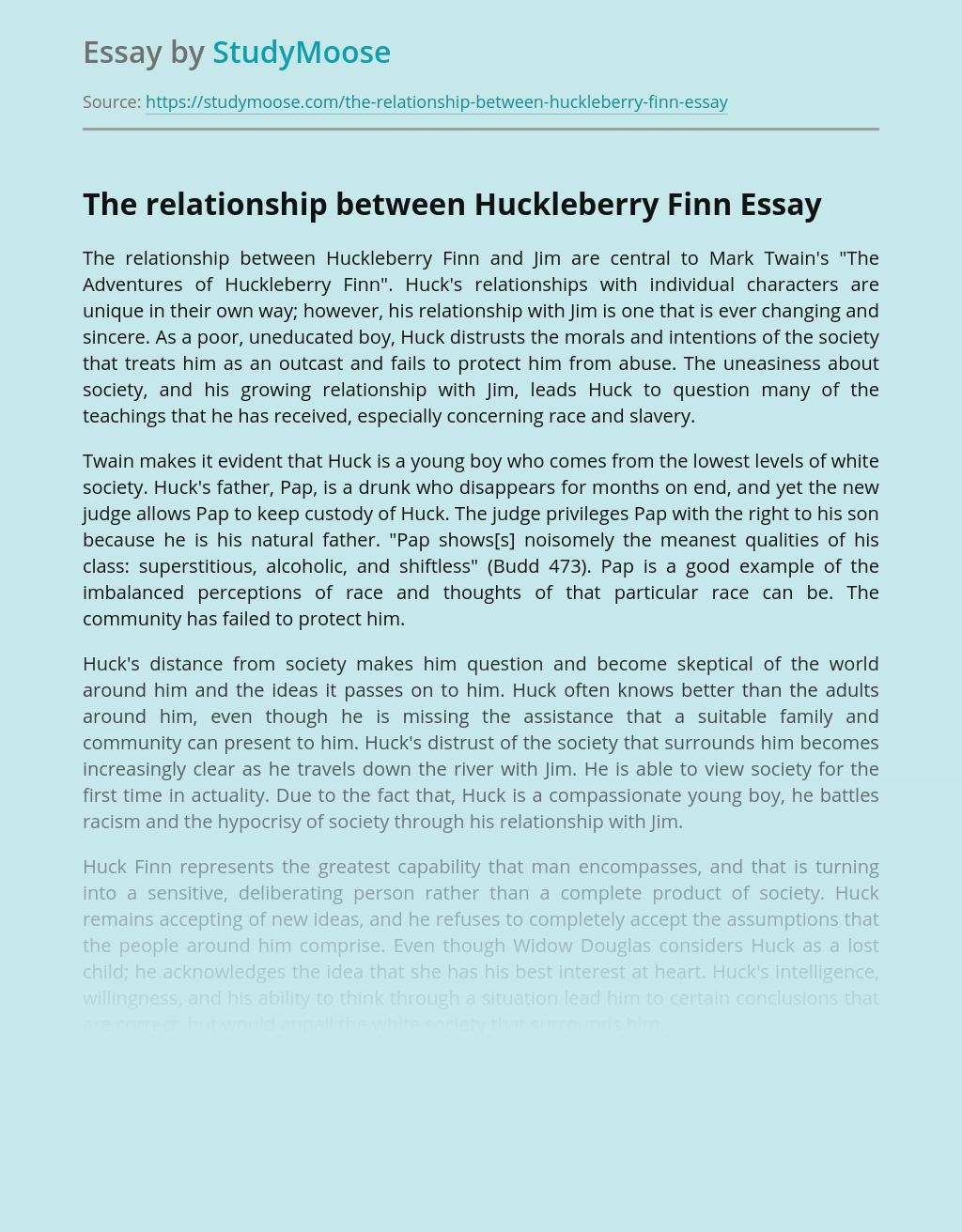 Don’t waste time
Get a verified expert to help you with The relationship between Huckleberry Finn
Hire verified expert
$35.80 for a 2-page paper
Stay Safe, Stay Original