In American history, only one piece of literature has been revisited time and time again, still retaining the controversy that has followed it through the years. The Adventures of Huckleberry Finn, by Mark Twain, is one such book. Over the years, many authors and well-known well-educated members of society have analyzed this book, writing paper after analytical paper on the moral fiber of the book. Some argue that the book is the basis for all literature that has ever come out of modern day America.

Don't use plagiarized sources. Get your custom essay on
“ An Overview of the Essay on The Adventures of Huckleberry Finn in the American History ”
Get custom paper
NEW! smart matching with writer

Others claim that the entire novel is a piece of racist trash, and that Mark Twain himself is a racist and ignorant man. Others still claim that the book is just plain bad, and not the great classic that is supposedly is. Using some of these well-written essays, I stand to prove that the book is entirely not racist. Rather, it is a satirical exploration of the final days of slavery, poking fun at everything equally.

If Twain were to be anti-anything, he would have to be anti-everything, because nothing is sacred in his lampooning style.

First published in 1884, The Adventures of Huckleberry Finn as a novel represents many years of anguish for Mark Twain. In fact, Twain himself was not happy with how his book was moving near the end of the novel, and put it aside for a period of three years (Smiley 62). He came back to the novel, and wrote what many critics describe as, well, a bad ending. He wrote the final twelve chapters, in which Huck and Tom plan and fail at Jim’s elaborate escape, and Jim gives up his freedom to save Tom’s life.

It is here, as Jane Smiley says, that the novel fails, and goes from bad to worse. In fact, in Smiley’s opinion, every single seen without Jim in it fails, mainly because she holds the notion that Jim is the protagonist. Well, I’m sorry, Ms. Smiley, but it is there that you are wrong. The story follows Huck, and rightly so, because the name in the title of the book is Huckleberry Finn, and not Jim. Logically, to leave Jim on the raft, which represents freedom, would be safest. One cannot expect Mark Twain to leave his characters on the raft for the duration of the novel, and if he wishes to have characters venture into the land, which is deep in Slave Country, it makes sense, plot-wise, to leave Jim on the boat, for his own safety.

Many naysayers bring up the issue of racism. One of their main points is Twain’s use of the word “nigger”. Modern critics, who learned to write and read in today’s “politically correct” society, are criticizing Twain’s book, which was written just after Slavery ended. Slavery existed in Twain’s lifetime, and this book, composed mostly of his own childhood memories, is less racist than it is a relatively historically accurate portrait of life in the mid 1800s. Jane Smiley compares Mark Twain’s almost autobiographical story to Harriet Beecher Stowe’s Uncle Tom’s Cabin, the book that provided the impetus for the civil war, saying that a much better book for the basis of all American Literature would have been Stowe’s Uncle Tom. These two books are obviously extremely different, in style and content. As Justin Kaplan writes,

“Instead of being issue-driven, a cry for action, as Stowe’s book was, [Twain’s) was autobiographical and nostalgic.” “…. To praise Stowe’s reformist novel for its “clarity of both style and substance” while faulting Mark Twain’s quite different sort of book… is to sell stylistic innovation, humor and imaginative literature down the river” (Kaplan 27).

Comparing Huck Finn to Uncle Tom’s Cabin is like comparing Jerry Lewis to Lawrence Olivier – Yes, they’re both talented actors, but to compare their styles does not do justice to their individual styles and talents. Huck Finn is quite a unique book, and comparing it to any other book does neither book justice.

Mark Twain, over his many years as a writer, developed a style that was quite unique. Especially in Tom Sawyer, and as well as in Huck Finn, his style was very lampooning, and, as always, very satirical. Twain writes “Here she was a-bothering about Moses, which was no kin to her, and no use to anybody, being gone, you see…”(3). In this quote, from the very beginning of the book, Twain already starts to satirize. Here, he is targeting The Bible, of all things and, although using superficial understanding, he is implying a question – what use is the bible if everyone in it is dead? It is in this, and many other quotes like that one all throughout the book, that Mark Twain uses satire to poke fun at the whole world. As I said before, nothing is sacred. Gender roles, religion, the very concept of slavery, High class, low class, working class. Everything is satirized, and if we try to compare Mark Twain’s satirical book to Harriet Stowe’s book, we negate both of their special talents, and, as Kaplan puts it, sell comedy, satire, and many other of Twain’s unique skills right down the river.

Certain authors have also taken a stand against Mark Twain’s use of the word “nigger”. It is used over 160 times in the book, and, supposedly, this is far too many times. People have complained endlessly, and thus, just because of one little word, the book has been banned from many libraries and schools. However, no one caused a fuss about the use of the word Nigger in Uncle Tom’s Cabin. Perhaps if Huck Finn had started a war, people would be less angry about the book? Mark Twain, in his use of the “N-word”, was merely painting an accurate picture. In fact, Huck Finn itself isn’t entirely historically accurate. If it were, “nigger” would appear on at least every page. As Fishkin says, “Censored in the 1860’s for having challenged the racist status quo, Twain runs the risk of being censored in the 1980’s for being a “racist.” Twain would have appreciated the irony of it all (Fishkin 1).” Perhaps as standards of racism itself changed, standards for defining racists changed too. The standard for racism has moved along a scale – what was anti-racist many years ago is now supposedly the most racist book ever written. Interesting to note the societal change, eh?

Julius Lester raves on and on about Twain’s inaccurate portrayal of slavery, but what he fails to realize is that The Adventures of Huckleberry Finn is not a portrayal of slavery. Yes, Jim is a slave, and yes, there are aspects of slavery discussed and analyzed, but if anything, it’s a satire of slavery – Jim, this novels only real representation of slavery, spends no more than 4 or 5 chapters in actual slavery. This is a satirical story, not a thought piece on the morals of slavery, like Uncle Tom’s Cabin. What many of today’s critics need to learn is that Huck Finn is, while it is full of it’s own moral values and ideas which can change the world in small ways, it still is a story, a whimsical tale of friendship, adventure, satire and laughter. Huck Finn is not a racist character, he’s a 14-year-old boy with dreams and wishes, who lived in the time period of racism. If the book were set today, the word “nigger” would never be used. It’s a time period piece, and the critics who claim that Mark Twain, a man who later donated a ton of money to an African American scholarship program, is a racist, and that Huck Finn is a racist novel. Being that neither one of those is true, I say let the book be taught wherever it can be. As Michael Patrick Hearn says, “Should any class fail to discuss he humanity of Mark Twain’s novel, then the school board should keep Huckleberry Finn and chuck the teacher.” (Hearn 117)

Should the book be taught in Wayland? Of course. While reading this book may not change my life, it certainly didn’t harm it, and any book that has caused this much controversy deserves to be analyzed. 11th grade is, seemingly, the perfect year – mature enough to handle the book, and yet immature enough that our imagination can run freely with the book, and we won’t take anything far too seriously. That’s the interesting thing with this book – Some people say that kids in school shouldn’t be taught the book at all. I say, it should only be read by kids in high school. Kids younger won’t be in touch with its mature themes. Adults will lose grasp of its childhood innocence and beautiful imagery of this free world. If anyone should be reading this book, it should be kids my age. So teach it to anyone who’s willing to listen, but keep in mind – it takes the perfect mixture of childhood and adult to really understand this book.

An Overview of the Essay on The Adventures of Huckleberry Finn in the American History. (2021, Sep 28). Retrieved from http://studymoose.com/an-overview-of-the-essay-on-the-adventures-of-huckleberry-finn-in-the-american-history-essay 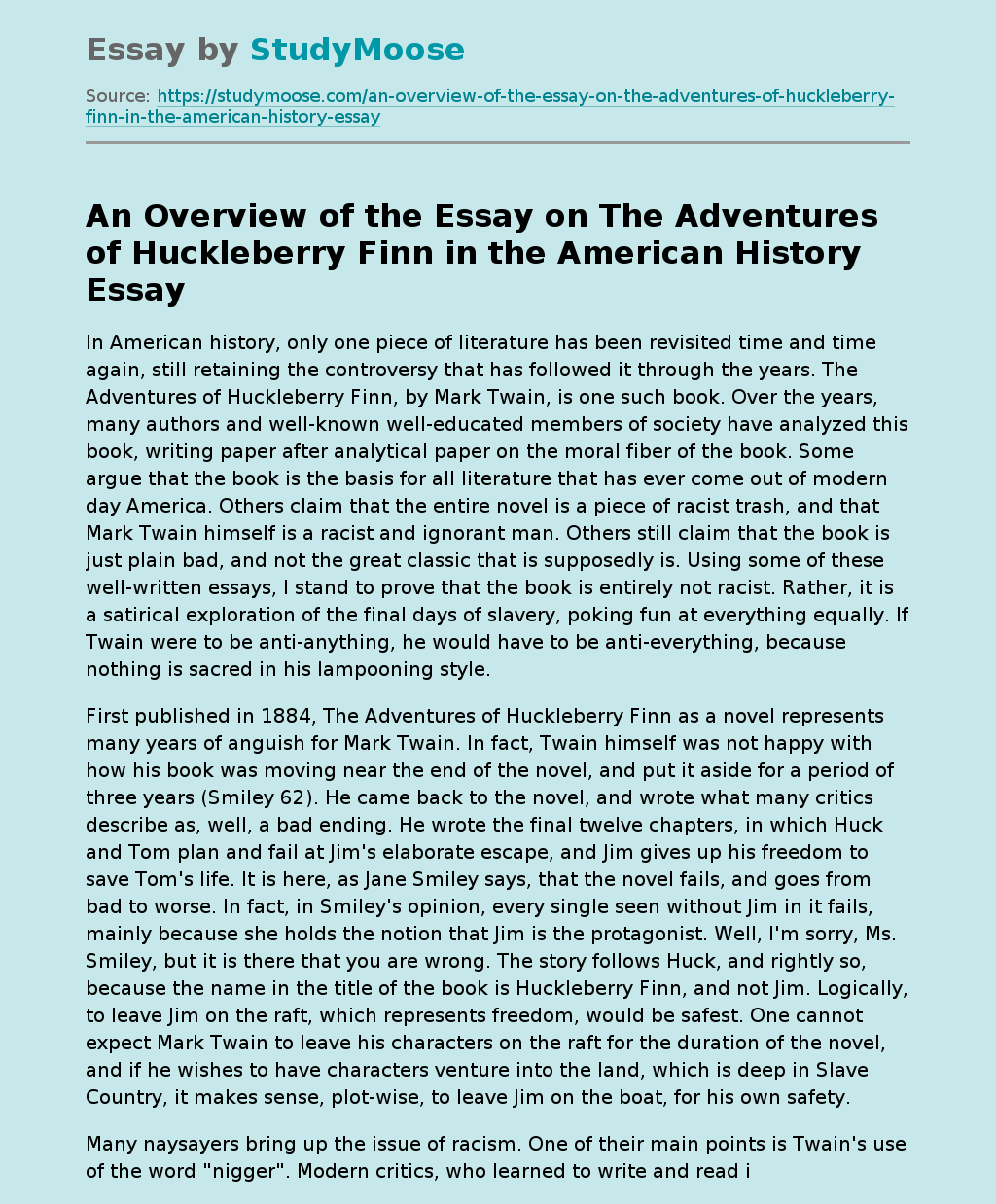