John Howard Griffin’s research should undeniably be considered sociological. He began with a theory, if he became black he could help understand the difficulties between races as both a white man and a black man in the south and with this knowledge develop a means to bridge the gap. With this information he developed a micro-theory, trying to explain a limited part of human behavior; why is there hate among blacks and whites? He collected his data in a process of explanatory research.

Don't use plagiarized sources. Get your custom essay on
“ Analysis of John Howard Griffin’s “Black Like Me” ”
Get custom paper
NEW! smart matching with writer

He needed to test his theory in order to elaborate existing explanations. He gathered all his data and went through all research methods in the hopes of explaining his theory. He followed the research process; developed a question, took into account what would be needed to answer the question, decided how to get this and conducted it as ethical as a black-white southerner could. He used a meta-analysis in examining the information.

Griffin improved the description of the relationship while developing explanations for the cause of such activity and aimed to advance research in this area by gathering new knowledge.

Finally, when he gathered all his information he released it to the mass media. Although it takes the form of a journal it should still be considered sociological research. The diary method is, in fact, beneficial. Instead of conducting a cross sectional form of research in which information is gathered at one particular time, Griffin, using the diary, conducted a longitudinal study. With such a study change can be identified and a broader understanding will develop in the hopes of answering the research question.

Of coarse when such a research method as a diary is used questions arise as to its validity and reliability.

It can be assumed that the reliability of Griffin’s work is quite substantial. He had an insider perspective due to his covert observation and participant observation. His information was derived from a large population across more than one state, while still focusing on the southern parts of America. All the persons mentioned in the diary shared the same belief; whites were limiting the black potential. Then it must be asked whether the diary was biased or not. Since it was, in reality, a diary, the information published could be selective. This then questions the validity of the research. There is no doubt that Griffin had opinions on the topic before it was investigated. However, the research was also very generalizable. This should help to alleviate many of the doubts towards the ethics of the means of research. Since human behavior is very complex it is difficult to narrow down the independent variable. All doubts on validity aside, the research was conducted in a method of sociological nature. It was a combination of participant observation, covert observation and unstructured interviews.

For example, Griffin had conversations at the YMCA with other black men, or on the bus between New Orleans and Mississippi. These weren’t done with an outlined set of questions; they were conducted by way of one oppressed African-American to another. In conducting his research in such an unobtrusive manner Griffin helped the media identify the setting, the human and social environment, their activities and behaviors, and non-verbal communication. In this method Griffin wasn’t looking to prove causality, rather looking to support his argument in hope for change. With all this taken into account it can be summarized that Griffin followed the research process and used sociological methods.

Norms are generally defined as an aspect in society in which an expected behavior binds a certain group of people. However, norms can be applied to many different areas. It can mean placing a set standard for achievement on a certain communal grouping based on the accomplishments of the average person from that grouping. It can also mean a characteristic that is representative of a social group. Or norms can be considered a common practice, belief or custom . However when dealing with norms it must be understood that they apply differently depending on the context of the situation. Much like social norms vary from legal norms. Social norms were the predominant force Griffin encountered throughout his research. Although legal norms played a particular part, judgment was based on the structures of mutual belief, not necessarily judicial.

For example, the “whites” of the southern United States were holding the assumption that the “blacks” were sexually demented and intellectually impaired . The southern white majority assumed that African-Americans were so open about their sex lives that they even performed activities in the streets and in front of children. They also believed that the blacks wanted white woman sexually and that due to their lack of education all they knew was their natural instinct to reproduce. They assumed this behavior to be applicable to all African-American men. As Griffin tries to explain, he can find no inferiority amongst the blacks; “These characteristics don’t spring from whiteness or blackness, but from a man’s conditioning” .

Role taking is a critical part of fostering any sober understanding of a relevant society. It involves looking at things from a different viewpoint. This assists us in understanding how different groups perceive us. We have to know what we look like through others eyes. In order to achieve this we must first understand their mind frame. John Howard Griffin goes through great lengths to achieve this. He understands that it is practically impossible for him to fully comprehend what life is like for a black man, while being a white man in the southern United States. Thus he undergoes pigment therapy that redefines his life. Griffin darkens his skin in order to appear as though he were a black American, in the hopes to achieve an unbiased account of African-American life in the deep south. By infiltrating the seemingly distinct society and adapting to the practices of that society Griffin has undergone role taking. When in New Orleans, Griffin’s first area of research as a black southerner, he quickly learns of the limitations enforced only by the fact that his skin color was different. By becoming the minority studied, Griffin was not only able to study, first hand, the accounts of racism, but he was also able to emotionally attach himself to the African-American society.

Alienation is the separation between “parts or the whole of the personality and significant aspects of the world of experience.” This term can have many meanings depending on the situation and for whom it is intended. In terms of Griffin’s book, alienation was the physical segregation and the emotional feeling of inequality and unequal opportunities based on skin color. Alienation was evident throughout Griffin’s experiences. Separate waiting rooms at bus stations, separate washrooms and fountains, isolated living areas, the inability to purchase food and drinks at certain stores, the inability to rest in certain areas, unequal job and education abilities, all formed the feeling of alienation. Griffin realized that this division, both physical and emotional would have to be overcome in order to attain a greater appreciation as a race.

Griffin and many blacks alike thought education was the key to destroying the norm of alienation. “Equal job opportunities… That’s the answer to much of the tragedy of our young people” . According to Griffin there were two problems that caused this alienation and lack of motivation to change, they were: the discrimination against the Negro and his discrimination against himself . According to Griffin then, it was not only the fault of the whites that the blacks were in the situation they were, it was partly the fault of the blacks as well.

Stereotypes are formed when the characteristics of a certain group of people are based on the generalized characteristics of a few. They are most often used to simplify that which we have difficulty understanding, in order to make it more predictable. As W.I. Thomas taught, what we believe to be true will be true in its consequences. Throughout history racial stereotypes have always existed. Perhaps, though, the most dominant stereotypes have been placed against African-Americans. They have been thought of as uneducated, immature, unmotivated, criminal, violent and sexual predators. However, as Griffin points out, the sins the whites commit are the same as the blacks. Except for the fact that blacks are deprived of the “pleasures of the spirits”. They feel like a lesser person so in order to acquire that feeling of accomplishment and manhood they engage in such activities .

After all, it is the white man who, all through the book, is intrigued by the sexual natures of the black race. It is the whites who hire black prostitutes and it is the whites who violently punish the blacks. Not only are the stereotypes revealed, they are identified as completely illegitimate. In one instance on a bus in New Orleans Griffin attempted to offer an elderly lady a seat by indicating with his eyes that there was an empty one beside him. He thought she would be sympathetic, however she disrespectfully replied, “What’re you looking at me like that for?” Implying that there were sexual desires instead of kindness behind his offering .

Reductionism in sociological research places limits on what can be considered as causes when attempting to explain a range of human behavior. Griffin may have been affected by reductionism due to the fact that he was writing a sociological paper. As a result he may have focused on such limited topics as norms, stereotypes and alienation. An economist, however, may have looked at the economic prosperity in the south compared to other parts to explain the racial tensions. Perhaps even the government would be to blame for enforcing racism through propaganda and unequal laws. A biological reductionism would be trying to reduce the problem down to the genes of the human being or as a revolutionary process. In order to achieve a full understanding of the situation, all accounts should be measured, not only those which apply to a specific field. Therefore, the validity and reliability of the research can be questioned.

For example, in Griffin’s book, he focuses only on the stereotypes of society, not where they come from. He doesn’t attempt to answer why whites feel hatred towards the blacks, only that it exists. Perhaps the underlying problem is purely situational. The south is known for its farms and small communities, but does this problem exist in the larger cities throughout North America? And if it doesn’t, why not? If it doesn’t exist than it is strictly environmental. Griffin mentions that there are those people who are not actually racist, but they fear showing any sympathy towards another race. What causes this fear? There must be some form of pressure from somewhere that causes this racism. All these questions must be answered in order to truly define the problems between African-Americans and Caucasians. Griffin did a fine job in writing the introduction to racism, however he left the body blank.

Analysis of John Howard Griffin's "Black Like Me". (2016, Jun 30). Retrieved from https://studymoose.com/analysis-of-john-howard-griffins-black-like-me-essay 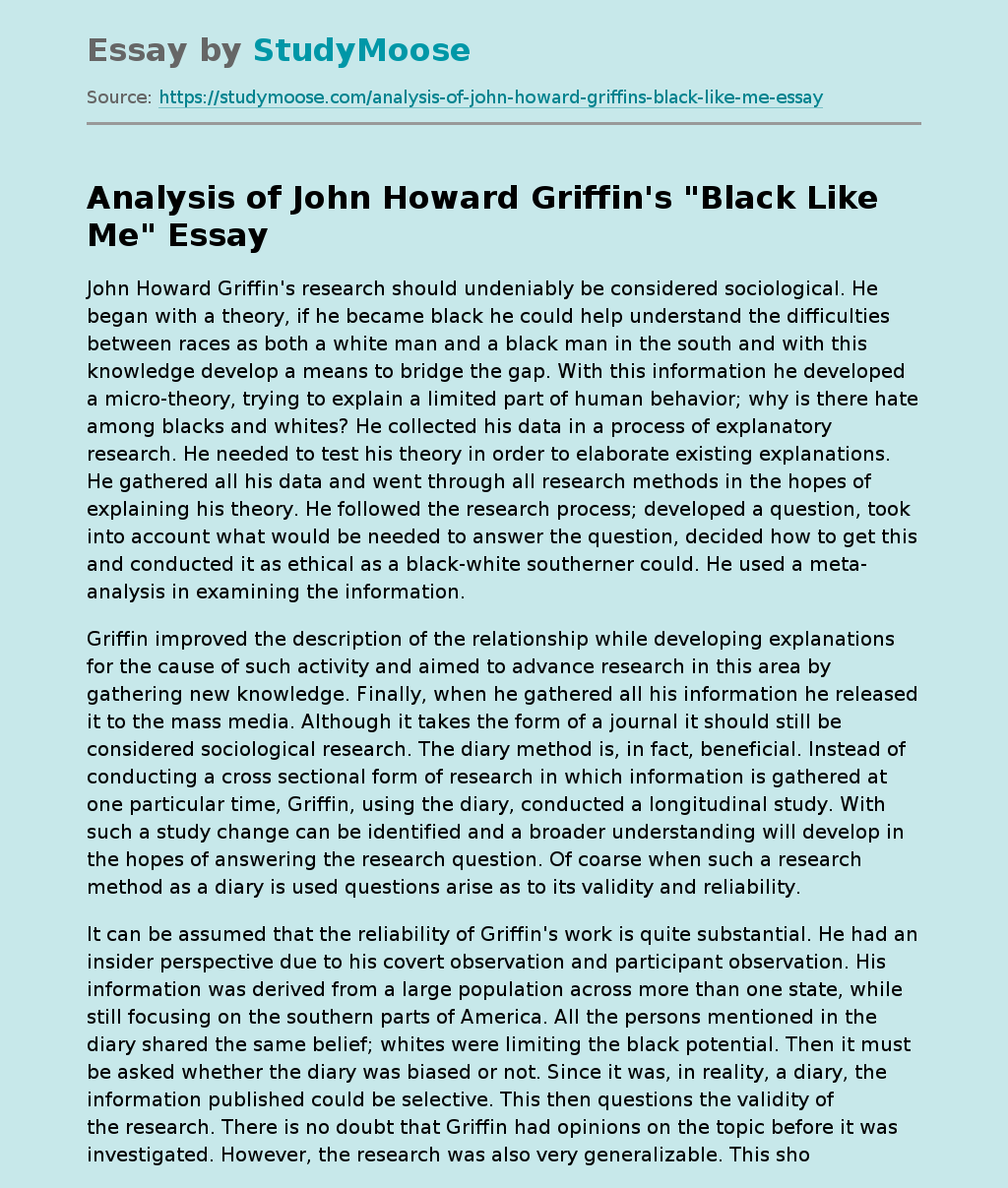