Democratic and Non Democratic System in a Country

In democratic system people are participating in political and decision making process without considering their race, color, physical ability such as Scandinavian countries. They are able to decide on their destiny directly or through their representatives. Each individual have their votes and these votes are effective and able to change decisions. There is no lumber on their choice and government can not mobilize citizens to pro-government relies; in contrast people are being mobilized by themselves or non governmental organization to put a pressure on the government.

Don't use plagiarized sources. Get your custom essay on
“ Democratic and Non Democratic System in a Country ”
Get custom paper
NEW! smart matching with writer

However, in non-democratic regimes people are not participating in political process and they were restricted by central body. The government has absolute powers over its citizens and nobody have a right to freely participate in election, decision making process and so on. The government dominated everything and every activity within the territory of its sovereignty.

Furthermore, the government has an authority to practice some policy to mobilize people for particular purposes like demonstrating against some countries or the activity of opposition parties or to show of that their government is representing their dignity and choices (Allen, 2002).

For instance, the former Iraqi regime restricted people from voting and the government banned any anti governmental actions, tortured and jailed people especially women and mobilized people to pro-government demonstrations against the USA and Israel (Lasky, 2006).

In democratic regimes the leaders and those who are governing country are elected by the community. The head of the state has not inclusive power, but there are some limitation on his/her authority that defined by the constitution.

This constitution written by some expertise and passed through democratic and freely referendum that people directly voted for like Denmark, Australia, Estonia, Germany, Uruguay after the authoritarian regimes in 1946 (Schiller, 2009, p. 7). The authority circulated among the government apparatus like parliament, president and prime minister and decisions are collective.

Likewise, there is a political pluralism and multi-party system that competes to achieve the majority of parliament seats and no one of them can control government. Parties are competing on the base of public goods, political reconciliation and values rather than monopolizing power (Dixon & Senese, 2002, p. 550). Though, in non democratic system the country governs by a small group of people whether they are individual, military, family or one dominant party (Allen, 2002, p. 170). They absolute power and use it to their self interests and through this they achieve their personal desires.

Fore example, in the dictatorship regimes, one individual on the top level decide on the destiny of millions of people without considering their likeness and wishes such as Hitler and Mussolini. Here, the president or prime minister doesn’t elected by people but they come to power through military coup or revolution. Also, in some places the government governs by the dominant family or tribes. The family gives the priority to its members and neglects other people to participate in the process of governing, also they use country’s resources and dominate the economy.

This is very common in monarchy systems especially in Arab countries like Saudi Arabia, Oman, and Bahrain. Controversy, one of the other features of non-democratic system is governing country by the Military, in this case “Human rights and democratic freedoms may be severely curtailed by the government” and the election is controlled by the government and opposition parties can not win or get the majority of votes due to the military intervention as Myanmar, Nigeria and North Korea (James et al, 1999).

Finally, in some countries one party controlled the whole country and there is no alternative or opposition inside the government like communist countries such as North Korea, China, Cuba, Laos, Vietnam (Slater 2003, p. 98) In democratic system, government is a guardian to human rights protection and providing the best life condition to its citizens. The minority groups whether they are Religious group or ethnic group are living in the safe environment without government intervention to confine their activity and repressing them.

Besides, they are participating in political process and their rights guaranteed from any threats by majority or any attempts to undermine their identity. However, in non-democratic regimes minority rights is absolutely under threatens of majority and the government exercise a tyranny and enmity policy toward them. They can not practice their religions beliefs and took part in political activities. In contrast there are many limitations on their freedom and most of the times they are in hazard because of majority groups that controlled the government apparatus such as

Iran that authoritarian regime targeted Azeri, Kurds, and Bloch. In some countries the minority groups can not express their identity, speak and study in their language but all of these are controlled by the government, and they should submit the government regulation like Turkey which violated the right of millions of Kurdish minority and doesn’t give them a permission even to speak and study in their language (Democracyweb, 2008). Besides, in such non-democratic system government arrest politician and human rights activist, also jail them with out trial as Tibet in Chine.

Individual liberty and free press are basic components of democratic system. People in democratic government express their opinion and make their choices. Furthermore, they can choose their religion belief, political ideology, sexual statue whether they are gay or lesbian and etc. In addition, they have organizational rights and they are able to create an organization and work independently. Also, their rights defined by the law and nobody can assault their freedom. Also, the government encourages more personal autonomy and support individual self-governing.

Besides, they have a freedom of speech and press. People contribute in healthy democracy and create a good government, economic development and political accountability (Freedom House, 2009). However, in non-democratic government individual liberty and freedom of speech is diminished. There is no choice for individual and the government imposes political ideology and belief on them. Anybody who disobeys would face penalty, and there is no freedom for homosexuality. Besides, only those organizations permitted that work for the benefits of the regime.

In addition, medias and newspapers are affiliated to the government institutions and publish articles that serve the government interests otherwise any contrary opinion is strictly forbidden. In democratic system there is a freedom of market and trading (Sewell, 2003). The government promotes private sectors and people can make their business and exchange their goods like the USA and liberal democratic countries. Nevertheless, in non-democratic regimes markets are monopolized by the government.

There is no space for private sectors and competitive market is diminished and this lead to economic disorder which directly effects on the citizens life. Equality and rule of law are the crucial components of democratic government. Democratic government looks at its citizens in one eye and tries to enhance the standard of their living equally. Also, “each person has an equal say to determine the common legal, political and economic institutions that they live under” (Stanford University, 2009).

Controversy, in democratic regimes law is superior and government should obey its legislature. Everybody is equal and treating equally and the executive should submit. The law is defined every citizen’s acts and reflect their interests. But, in non-democratic regimes the government makes disparity among its citizens, maybe support certain people or social class and serve them, simultaneously neglect others. Alternatively, there is a weak rule of law and doesn’t play a vital role and undermined by the oppressive government.

Moreover, the government may pass a law or procedure that doesn’t reflect people’s interest like Kurdistan when parliament passed a law of polygamy without asking people which was not in favor of women (Ahewar, 2008), but they tolerated under the pressure of religious groups. All in all, the democratic system is about decision making and people’s participating in governing. It has components like collective decision, electoral participations, political pluralism, multi party system, minority rights, free markets, individual liberties, freedom of speech and organizational rights.

But in no democratic regimes people are not self-governing and human rights and individual freedom is under threatened. The government and leaders are repressing minority groups, opposition parties and create inequality among their citizens. Besides, head of the government has a complete power to make any decision and law. Free media, newspaper and organizational activity are prohibited, also markets and economy is dominated by the government.

Democratic and Non Democratic System in a Country. (2020, Jun 01). Retrieved from https://studymoose.com/democratic-and-non-democratic-system-in-a-country-essay 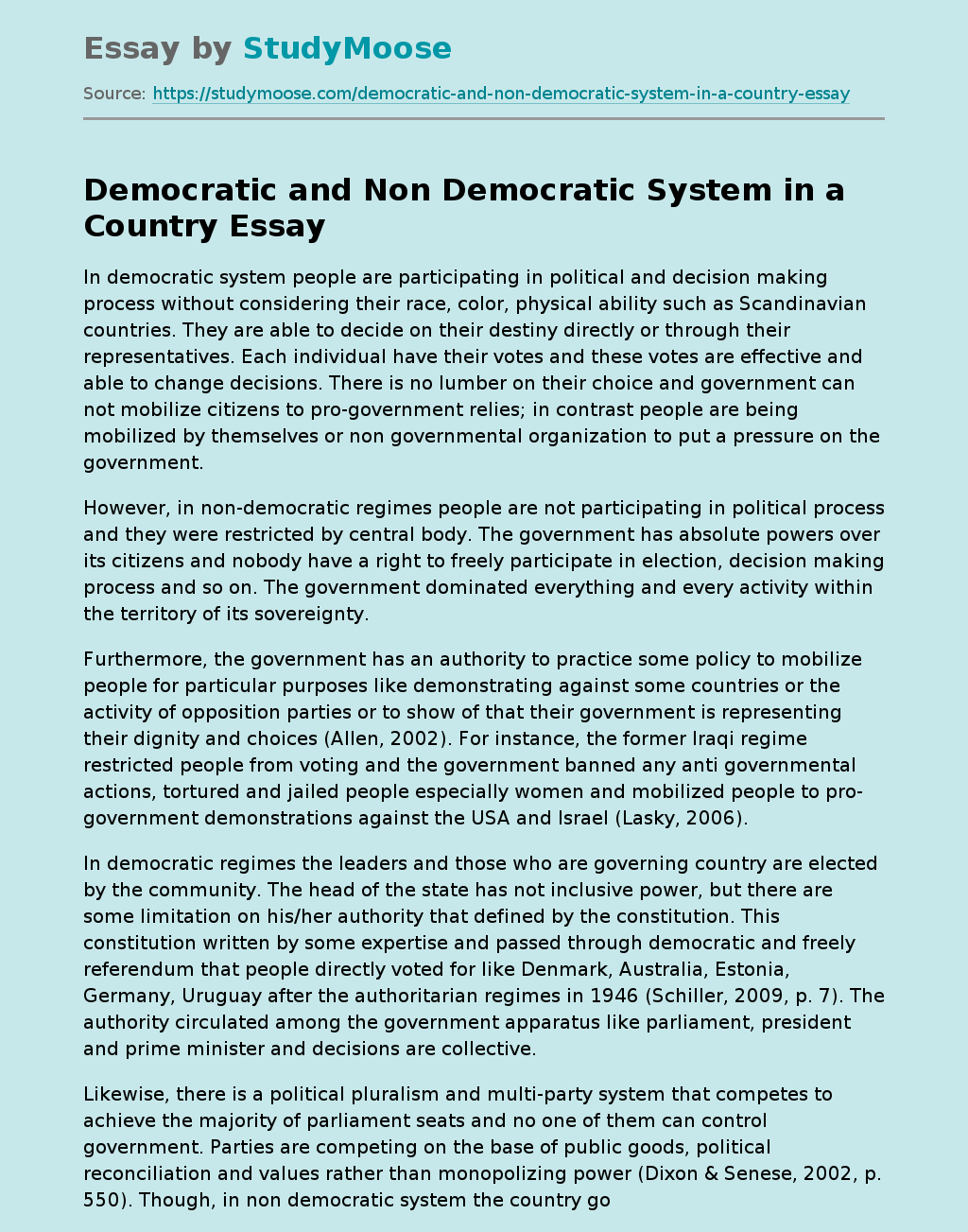