Abraham Lincoln was a very democratic president. He believed in the Union and would do anything to keep it together after the secession of the south that followed his election as president. However, to regain the entirety of the Union, he had to make some risky decisions that may have labeled him as autocratic. The fact that he was both democratic and autocratic is valid for the most part.

However, the purpose of his tyrannical actions was to preserve the Union.

Lincoln could be seen as democratic through his persistent drive to save the Union. After his election in 1860, the deep south seceded from the Union off of the belief that their rights were being violated. Then, following the events at Fort Sumter, the rest of the south seceded. Lincoln did everything in his power to try and regain peace in the country and save the Union from destruction.

He stuck with the war for four long and bloody years while the Army of the Potomac was constantly struggling with defeat. If George McClellan had won the presidency, there would be negotiated peace. War would not have been sought out to bring back the southern states. Instead, there would be no guarantee that the south would even return to the Union. In addition, Lincoln did not believe in slavery. Even though he was still racist towards black, he saw the obvious immorality of the establishment.

He fought for their freedom through his Emancipation Proclamation, which stated that all slaves in the Confederacy were free from their masters. Lincoln fought for the preservation of the Union, a symbol of equality and democracy. He would protect it at any cost. With that, he also freed the slaves in the United States, which supported the idea of democracy he felt he needed to protect.

Although Lincoln was a man of the people, he could also be considered as autocratic. But his tyrannical decisions and actions were not made for desire of power. He made them out of democratic intentions. Lincoln suspended the Writs of Habeas Corpus in the area between Washington and Philadelphia, a bold move on his part. The Supreme Court even ruled this action unconstitutional, but Lincoln ignored it. Without putting much thought into it, this does seem unfair and unconstitutional. Put it was wartime, and not all the same rules apply. Lincoln made this decision for the benefit of the war effort. There were mob attacks on Union troops passing through Baltimore, so by suspending the writs, civilians supporting the Confederacy could be arrested and held without a trial. In addition, Lincoln expanded the size of the Union Army without congressional approvement. But of course, this was vital to the war, since this action allowed the North to outnumber the South.

Also, the Emancipation Proclamation was considered unconstitutional by some. Lincoln pushed this act through that would free all the slaves in the Confederate territory without the vote from the states it would affect. But Lincoln’s reasoning behind this was that by making the war about slavery, it would prevent England and France from joining the fight, for if they did, it would be a lost cause for the North. In addition to this, Lincoln hoped that the free blacks would provide further trouble for the South. Not only would the freedom for all the South’s blacks completely shake their economy, they could also join the fight for their freedom. Lincoln did many things in extending his executive power that may have been seen as tyrannical and autocratic, but the reason he made these decisions was to protect and preserve the Union as a symbol and model of democracy.

Abraham Lincoln was clearly democratic as he fought to maintain the Union as a whole. He was also the one responsible for the freedom of African Americans. And even though he did take some autocratic action during his presidency, it always had some benefit for the war effort, whether it was disrupting the Southern economy to make the anaconda plan work faster, or to detain Confederate sympathizers in the Union. Without Lincoln’s bold behavior, the war would never have been won. Without him, the Union would be broken.

Lincoln: Democratic or Autocratic. (2016, May 13). Retrieved from http://studymoose.com/lincoln-democratic-or-autocratic-essay 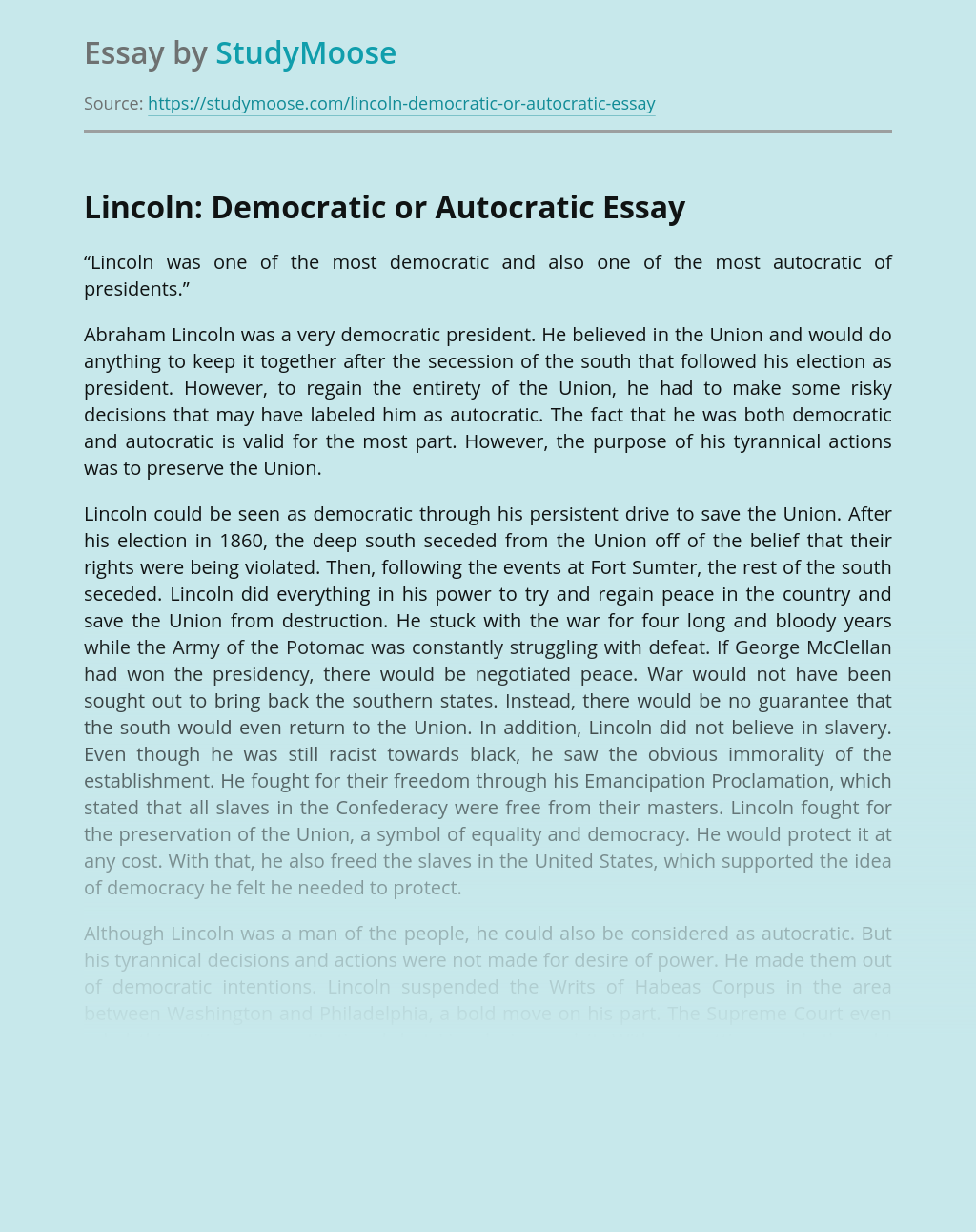 Don’t waste time
Get a verified expert to help you with Lincoln: Democratic or Autocratic
Hire verified expert
$35.80 for a 2-page paper
Stay Safe, Stay Original