Democratic and authoritarian are two very different and contradicting forms of political regimes. They differ in the way a country or a state is managed. In attempting to identify and discuss the differences between the two regimes, we should think what implications do the two regimes have on the political system. How are they different in terms of the institutions they inherent? How are rulers elected and which one provides the more comprehensive representation? How does the law making process differ, what implications do they have on the judiciary and civil rights? Is the distribution of power different in the two regimes? And finally which one is more prosperous economically and in providing a stable political system.

Don't use plagiarized sources. Get your custom essay on
“ Authoritarian and Democratic Regimes ”
Get custom paper
NEW! smart matching with writer

I start off by trying to define the general characteristics of the two regimes.

Authoritarian regime is a political rule forced upon its citizens without their consent. In other words, there is no conception of free and fair elections and rulers rule in their own interest over the mass.

Rulers do not face the threat of ‘exit’ or ‘questioning’ and thus are not accountable to anyone. Organisations that are critical of the regime and attempt to discuss potential alternatives are either banned or severely punished. Freedom of speech and the existence of unbiased media are inconceivable. Inflow of information is either manipulated or not allowed as it may develop a possible threat to the regime. Some examples of states with these characteristics are Iraq, North Korea, Egypt, and UAE.

The first two of these are similar to each other. Single party states allow only one political party to compete in elections and rule over the state and dictatorships arise when the leader of the single party accumulates power and forces it upon the citizens. The third form of non-democratic rule is known as a ‘military regime’. In such a regime the ruler, mostly the commander in chief of the army accumulates military power and takes over an elected government. In all three kinds of authoritarian rule described above, the rulers rule in their interest, without the consent or approval of the people.

In contrast, a democratic system of government in theory sways into the direction of representative rule. Leaders are directly or indirectly elected. Such a system allows free and competitive elections without any restriction on the number of political parties, an absent feature in authoritarian rule. The ability of independent organisations to function without any restrictions, the existence of interest groups and the accountability of the government is vested in such a political system. Some examples of such states are the US, UK, Australia and France.

In democratic states, all citizens have the right to cast their vote and no one is deprived of this right regardless to their race, status or background. Candidates are chosen for each state or county and these candidates collectively form the legislative i.e. Congress in the US and Parliament in the UK. Presidents or Prime Ministers are indirectly elected by the population and are subject to a 4-year term, after which they have to fight again to be elected. This way, people from all over the country can choose their own MP or Senator to represent them in the legislative authority. If for instance candidates fail to satisfy those that have elected them, they will not be elected in the next election and loose their popular status and position.

In a democratic country the sovereignty lies with the people. Elections in authoritarianism are non-democratic. Rulers may come into power by overthrowing a civilian government by the use of military force. Such was the case in Pakistan in October 1999. Single party states offer no realistic choice to the people i.e. there is only one candidate for every post. Suffrage may not be given to everyone, as some might not have the right to even cast their votes. Hence elections in such a scenario are more or less organised or pre-planned.

As mentioned above, democratic regimes allow the existence of organisations that may or may not bring out the mistakes of the government in power. They may exist as interest groups, media groups, trade unions or even environmental groups, all with varying interests. The elected government has to try and satisfy all these interests to the best of its ability in order stay popular. This will inevitably lead to fair play with government officials being answerable to the people. Corruption and mismanagement is less likely to be the case in this context.

“So, while democratic countries are not immune to corruption, democratic institutions certainly make it more difficult for corruption to go unnoticed” (Sullivan, date unknown)

In authoritarian regimes these institutions are not available, but if they do exist, the government controls them. Russia has long had the tradition of being a ‘one party state’ and the non-existence of more than one political party fails to provide the checks and balances with otherwise would have been the case. In Britain, the existence of the left wing, right wing and the middle allows representations of wide variety, rather than one party enforcing its own ideology.

The distribution of power is concentrated in authoritarian regimes; whether they are single party states or dictatorships. Leaders of such states are also the chiefs of the armed forces, secretary general of the party and head of states. This means that they are not accountable to anyone and there can be no one to question their authority. The dictator controls legislative, executive and judicial powers (see below). Some good examples could be in Germany when Hitler assumed these powers or Saddam Hussain who currently is the leader of the Ba’ath party in Iraq and controls these powers.

Civil rights are recognised differently in the two regimes. A democratic state provides its subjects with substantial legal rights. If for example any part of the executive has violated the individual right of a citizen, he is entitled to fight for his right in the court of law. He can approach the media to help him attract attention of the country or even the world if he has been significantly deprived of his rights or if he has experienced substantial loss due to the actions of the executive. In contrast, in a dictatorship such as Iraq, the person would be deprived of his basic legal rights. The judiciary is not independent and access to media groups is restricted.

He often has no legal defence, there are no public hearings and the decision against the individual is final, with no recourse to appeal. (Arabicnews.com, 2003) In single party states those elated to higher offices that are close to the authoritarian ruler are very unlikely to become a victim of any legal litigation. In democratic countries this is not the case, courts may convict MP’s, senators or any individual regardless to their status or position. In Australia “Andrew Theophanous, a former senior Labor parliamentarian of nearly 20 years standing who once served as a cabinet secretary to Prime Minister Paul Keating, was this month sentenced to a total of six years jail on four charges of migration fraud” (Rees, 2002).

Due to the structure of the government, legislation is very much controlled by the authoritarian government. In single party states people are not given the opportunity to choose between different parties and hence have no option but to choose the legislation passed by party. It is difficult to envisage laws being debated in or scrutinised when the same party appoints all members of the legislative council. Its even worse in dictatorships when the leaders controls legislation powers, and passes laws that are never debated by any opposition. In democratic states like the US, legislation needs to be approved by a majority in the Congress. Many laws are heavily scrutinised and many do not even pass the process.

Democratic countries tend to be economically liberal and achieve faster economic growth as compared to authoritarian regimes. Just like a monopoly may occupy the majority market share of a product, authoritarian states own most enterprises and are subject to the inefficiency, and low productivity associated with some monopolies.

“This is the root cause of the many flaws of PRC state-owned enterprises, which are plagued by poor efficiency, outdated management and too many idle employees”

The reason for the different pace in economic growth is because of the structure under which the economy operates. When all resources are owned by the state and the decisions are centrally planned, there is little incentive given to workers to work harder, or be more productive since the state plans and distributes the wages. This is not the case under democratic regimes. Enterprises are given the incentives that allow them to invest in human capital, which leads to higher productivity and economic growth. Firms can actively try to make profits, and in pursuit bring greater efficiency and higher productivity where as in the other case the objective is to provide goods and services that are shared equally. Equality, not efficiency is the overriding objective in authoritarian states.

The differences discussed above between the two regimes would intuitively lead us to believe that the democratic option is the more widely preferred method of government. In fact in my opinion it should be the adopted approach. Evidence has shown that it is the leading form in most countries today, and many countries previously under authoritarian rule have switched to the liberal form of government. Which one of the two is a better form in practice is a different issue. Are the tools used in democracy as effective as they are described in theory? Are authoritarian states still the more undesirable option considering USSR was economically very successful in the past? This no doubt throws a question that can be heavily debated!

1. ArabicNews.com – The US and Iraq: democracy and authoritarianism Iraq-USA, Analysis, 2/3/2003. 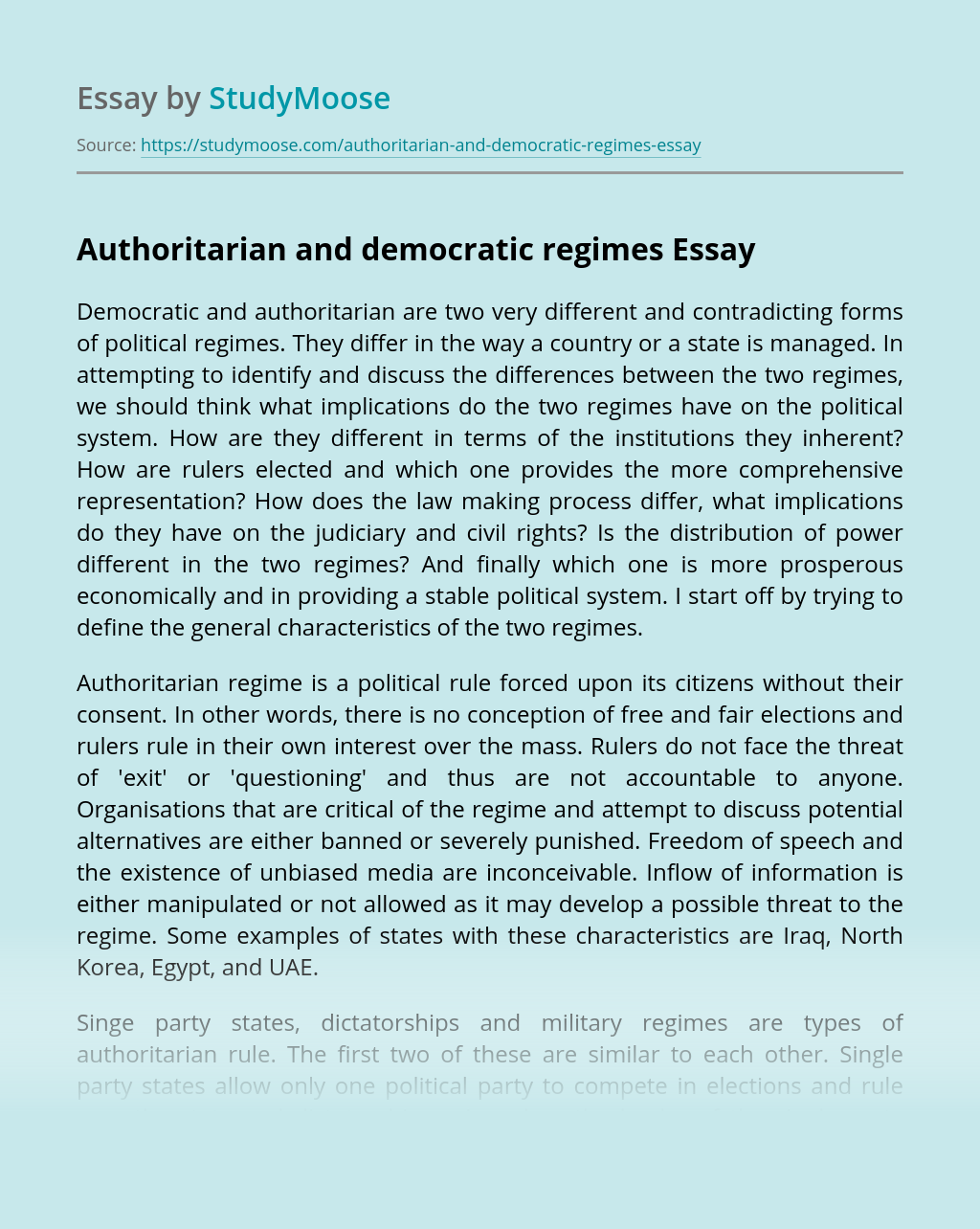