Driving age young people under 25 make up around one-tenth of the population in OECD countries, but represent more than a quarter of car drivers killed on the road (See Figure 1). And they are not only a danger to themselves. Studies in the US and the Netherlands show that for every 10 young drivers killed, 13 passengers or other road users also die in the same crashes. Worldwide, road crashes are the single greatest cause of death for men aged 15-29, and the second greatest for 15-29-year-olds overall, according to World Health Organization (WHO) figures.

Don't use plagiarized sources. Get your custom essay on
“ Road Safety Essay ”
Get custom paper
NEW! smart matching with writer

Even in countries with a good overall road safety record, large numbers of young lives are being lost on the roads – more than 8 500 young car drivers die in OECD countries every year, and death rates for young drivers are typically about double those of older drivers. Although overall road safety is improving, the ratio between young and older driver death rates has not improved in many countries, so there is clearly a need for specific measures to tackle the problem of young people’s safety on the roads.

Young men are particularly at risk, with death rates up to three times higher than those for young women. To make matters worse, the risk for young male drivers compared to older drivers has actually risen in a number of countries over the past decade. In the UK, for example, in 1994 a young male driver’s risk of being in a fatal crash was a little over 4.5 times that of a driver aged 30-59; by 2002 this had risen to 7 times greater.

Driver distraction and inattention are important driving safety issues. Within the past five years, the use of in-vehicle technologies for example the cell phone and the pager, became more popular. The cell phone, primarily, causes a concern about a concomitant increase in driver distraction. Billboards and artifacts from roadsides also contribute greatly to the distraction. Drivers however are not the only ones to be blamed. Pedestrians have traditionally accounted for many deaths on the road. During the past five years, pedestrians have accounted for at least 30% of road accidents. Pedestrians must, at all times, walk on walkways and cross the main roads and highways with extreme caution always giving the right of way to cars approaching.

Young drivers have high numbers of crashes when driving at night and on weekends, and when carrying young passengers. Many crashes are the result of speeding and while driving under the influence of alcohol or drugs. Failure to use seatbelts is also a key factor in death and injuries. Young people are over-represented in single-car and loss-of-control crashes, and crashes where the driver is turning across oncoming traffic.

The most effective solutions to road safety related problems integrate the driver, the vehicle, the road and environmental considerations. Improvements in road safety can best be achieved through consultation and co operation with specific levels of government, industry and the public. All users of the transportation system must share responsibility for safety. Recently, road accidents have increased drastically and should be real. 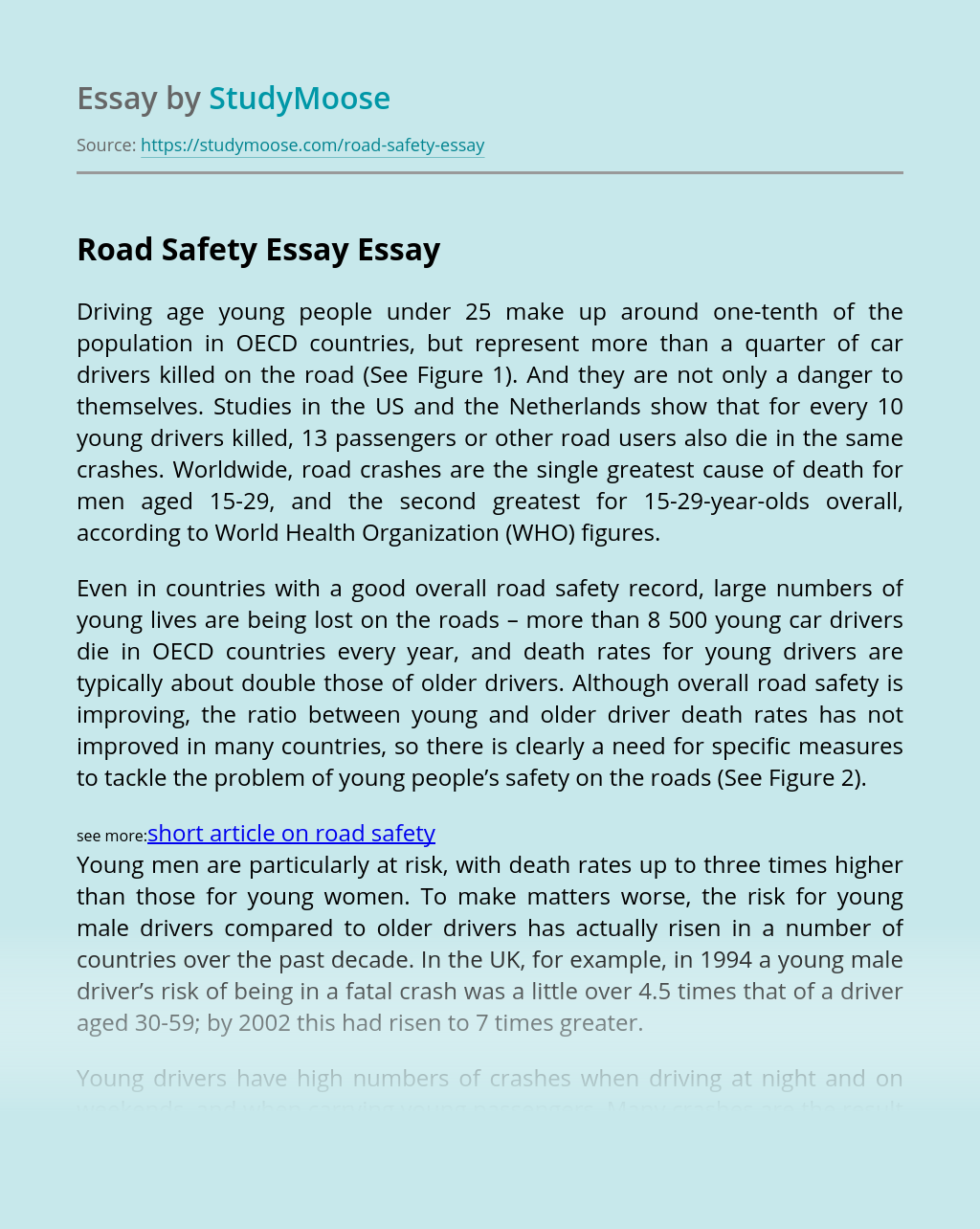