Phoniness and Innocence in The Catcher in the Rye

There comes a time when everybody has to say good-bye to their teenage years and become an adult. The carefree childhood will be challenged by strains and expectations. Those unwilling to face them are doomed to fail. Holden Caulfield, the 16-year-old protagonist of J.D. Salinger’s novel The Catcher in the Rye, is one of the adolescents who question the attraction of being an adult. Shortly before Christmas vacation, Holden has been expelled from an elite prep school in Pennsylvania.

Don't use plagiarized sources.
Get Your Custom Essay on Phoniness and Innocence in The Catcher in the Rye Just from $13,9/Page

Disinclined to stay at the school any longer or return home, Holden decides to spend a few days in New York City. During his tour, he meets different people that he calls “phonies”. The frequent use of the word has a deeper meaning than it might appear at first look. Holden’s obsession with phoniness demonstrates his conflict with the hypocritical adult world.

The word “phony” has a unique meaning for Holden. He uses it to describe people that pretend to be someone else in order to feel superior.

They lie to themselves and to others. This deception does not always happen consciously. For example, the first so-called phony that Holden mentions is Mr. Ossenburger, who made a lot of money by burying people with cheap funerals. He says that this man “came up to school in this big goddam Cadillac, and we all had to stand up in the grandstand and give him a locomotive – that’s a cheer” (16). Holden calls him a phony because Ossenburger talks about integrity and praying to Jesus in his speech to the students while he takes advantage of mourning families. Furthermore, the school is phony because they welcomed him and named a dorm after him only because he gave the school money. This hypocrisy bothers Holden very much. Whether it is a stereotype presented in a movie, or the expression “grand”, he classifies them into the category “phony”.

Holden’s hatred towards phoniness is closely connected with his protecting nature. In his mind, phoniness is an element of adulthood. Being an adult means being forced to face problems and make compromises. Grown-ups need to hide their weaknesses in order to survive. Therefore, growing up inevitably means being phony. Opposite to that, children do not have to act a certain way to achieve something. Consequently, innocence is the opposite of phoniness, and growing up means to lose your innocence and become phony.

Thus, Holden wants to protect the innocence and purity of young children, hoping that they would never be confronted with the ugliness of the adult world. This protective instinct leads to an admiration and idealization of children, especially his younger sister Phoebe and his dead brother Allie. Holden wants to be the catcher in the rye, someone who catches children that fall over the edge of an imaginary field of rye down the cliff into the corrupt adulthood. When he sees “fuck you” written on the walls in his sister’s school and in the museum, he tries to erase it but eventually realizes that he can’t erase all the curses in the world. Children will always, at some point, be confronted with sexuality.

This pessimistic view of the world affects him in a harmful way that ultimately leads to his breakdown. Holden sees the world in black and white. Some people are phony, others are not. However, he fears that he is slowly becoming a phony himself. “I’m the most terrific liar you ever saw” (9), he admits. Alone his judgemental remarks show how confused and insecure he is. On one hand, he tries to act experienced and mature when talking to adults, but on the other hand, he desperately tries to maintain the innocence of himself and others. He tries to protect himself by using a cynical voice throughout the novel, but this only keeps him alienated from his environment. With every disappointment, his denial grows, and a mental breakdown is unavoidable. He walks around in New York, screaming out his dead brother’s name. Only Phoebe, his younger sister, can show him his real situation and keep him from escaping reality and becoming mad. Still, he ends up in a mental institution in California.

Holden struggles between the phoniness of adulthood and the innocence of childhood. He is trapped between the two worlds. His refusal to grow up keeps him isolated. His former English teacher, Mr Antollini, advises him to start applying himself in the next school. He tells him that Wilhelm Stekel once said, “The mark of the immature man is that he wants to die nobly for a cause, while the mark of the mature man is that he wants to live humbly for one” (). Finally, Holden understands that giving up isn’t the solution to his problem, and he indicates that he might try harder in the future. Maybe Holden isn’t so much of an outsider after all.

Phoniness and Innocence in The Catcher in the Rye. (2016, Aug 01). Retrieved from https://studymoose.com/phoniness-and-innocence-in-the-catcher-in-the-rye-essay 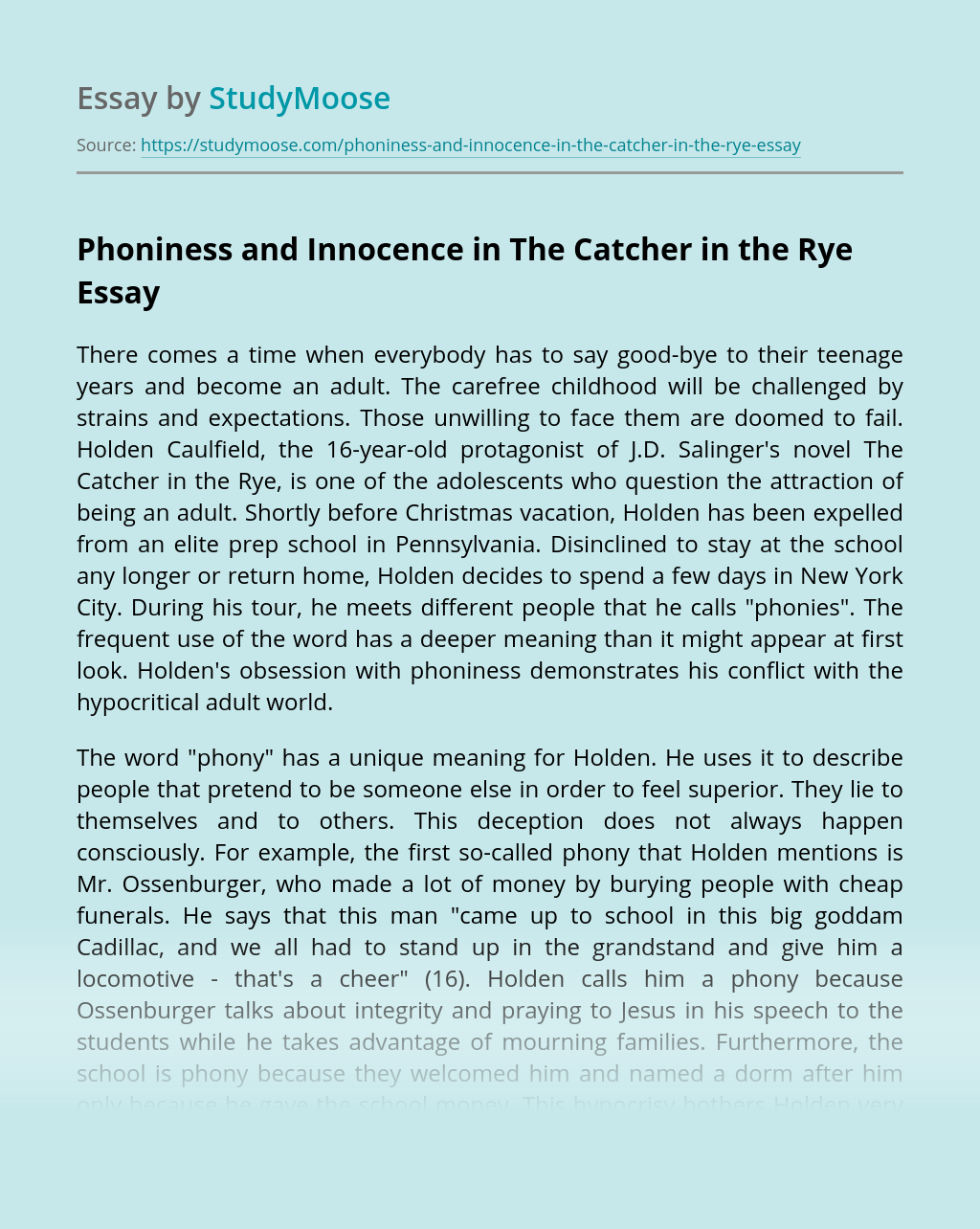 Driving Age Should Be Increased to 18

The huge number of car crashes caused by young drivers is an issue which is now being strongly debated in Australia. According to the new research released on 7 April 2010 by Carhistory.com.au, Australia’s most comprehensive vehicle history website, one in ten Australian teenagers have had a car accident (Coffey, J 2010). Due to that...

Get Essay
Film “The Black Balloon”

The film “The Black Balloon”, is a 2008 Australian AFI award-winning dramatic feature film that stars Toni Collette, Rhys Wakefield, Luke Ford, Erik Thomson, Gemma Ward; as well as a cast of newcomers. It is directed by first-time feature film director, Elissa Down, Despite being set in the early 1990’s, the movie, “The Black Balloon”...

Self-concept is a self-description based on how you perceive yourself, with that said the very essence of your emotion is derived from self-concept and as a result from that, self-esteem… which is a self-evaluation that is rooted in your self-concept. Only your beliefs are what influence your emotions, even if that belief is what you...

Marriage (also called matrimony or wedlock) is a socially or ritually recognized union or legal contract between spouses that establishes rights and obligations between them, between them and their children, and between them and their in-laws. The definition of marriage varies according to different cultures, but it is principally an institution in which interpersonal relationships,...